Investors are watching palladium closely at the start of the week. Bulls are very much in the driving seat with the noble up almost 3% at the time of writing as supply concerns underpin the market. The metal rose by 8.7% on Friday following the news that the London Platinum & Palladium Market suspended  Prioksky Plant and  Krastsvetmet of Non-Ferrous Metals from its goods delivery and sponge accreditation lists. Following that, the CME Group suspended the two refiners until further notice. The Japanese are currently in consultation and there is a strong chance that Russia will lose its good delivery status on the Osaka Exchange.

Oil markets have kicked off the new week on the defensive, with rising concerns over China’s COVID outbreak weighing on the demand outlook. The front-month Brent contract has dropped back down to $100 per barrel as a result, with virus cases in the Asian nation continuing to rise while there has been no signal as to when the restrictions could be lifted. We have seen massive disruptions at ports and other logistical hubs once again, while oil refiners have trimmed their operating rates given the softer demand.

Focus also remains on the Russia-Ukraine war, which has so far led to lesser disruptions to global oil supply than initially feared. This is why we have prices trading back down towards pre-invasion levels, as Russian crude continues to find its way to the market, mostly by being sold at a massive discount to Eastern nations that are finding ways to circumvent the global financial restrictions placed on Russia.

Kenya: Kenya plans to sell KES 375.6bn ($3.2bn) worth of foreign bonds over the next two fiscal years. The government plans to raise KES 105.6bn in the fiscal year beginning July 1 and an additional KES 270bn in 2023/23. As mentioned last week, Treasury Secretary Ukur Yatani plans to cover the budget gap by raising KES 581.7bn domestically and KES 280.7bn offshore. Regarding the potential sale of Eurobonds, an official from the public debt management office said, “we do not disclose the mode of instruments we deploy to fund the budget gap.”

Mali: Ministry of Economy and Finance Head of Communication Mahamet Traore on Friday reported that Mali has failed to meet debt payments of $290mn due to sanctions following coups in 2020 and 2021. Furthermore, Mali owes 30bn CFA francs to external creditors, and without access to regional markets, Mali was prevented from raising 300bn CFRA francs of domestic debt in Q1. Note that sanctions include border closures and restrictions on financial transactions.

Nigeria: President Buhari has said the state gasoline subsidy will cost almost ten times more than budgeted because of the war in Ukraine and asked lawmakers to approve more borrowing to help fund it. According to the President, the Petroleum Motor Spirit subsidy is expected to cost NGN 4trn ($9.6bn) this year, compared with a previously projected NGN 443bn. Higher prices have hurt Nigeria because the state energy company swaps unrefined crude for imported gasoline, which it sells on at an increasingly steep loss to keep the pump price at NGN 162.5 a litre ($.39). According to the president, significantly lower crude output due to “massive theft” by criminals who tap into oil pipelines is set to further weigh on budget revenue. Meanwhile, the national police force requires additional funding to combat security challenges, and as a result of the revenue and spending constraints, the budget deficit is expected to increase to 4% of GDP, wider than 3.5% of GDP forecast in January. President Buhari added that “the incremental deficit will be financed by new borrowings from the domestic market.”

Nigeria: To support businesses that are avoiding overseas debt because of foreign-currency risk, the International Finance Corp plans to sell NGN 400BN ($962mn) of bonds in Nigeria. According to an official from the IFC, the lender has sought approval for the sale from the Nigerian Securities and Exchange Commission. The debt will be sold in installments and offered to Nigerian businesses seeking to expand without taking on the foreign currency risk that comes with dollar loans. Note businesses in Nigeria have been hard after the West African nation devalued the currency three times in the last two years following an economic contraction triggered by Covid-19 and a slump in oil price.

Benin: Fitch on Friday affirmed Benin’s Long-Term Foreign-Currency Issuer Default Rating (IDR) at ‘B’ with a stable outlook. According to the rating agency, the ‘B’ rating reflects strong trend growth, government debt to GDP that is lower than peers, and a recent record of economic reforms and prudent fiscal policies, balanced against low government revenues and a relatively undiversified economy heavily exposed to Nigeria and the cotton sector. Factors that could lead to a negative rating action or downgrade include failure to stabilise debt/GDP over the medium term or a significant slowdown in trend growth. Conversely, a positive rating action could materialise if there is fiscal consolidation that mobilisation sufficient to address fiscal-sustainability risks related to a narrow revenue base. Furthermore, progress on economic diversification that reduces the exposure of the economy and the external accounts to fluctuations in border trade with Nigeria and the cotton sector

Zambia: Following on from comments by UK Minister to Africa Vicky Ford last Thursday that Zambia’s debt revamp is being delayed by a single foreign creditor, reports on Friday suggest that creditor is China. China is reportedly reluctant to support Zambia’s IMF programme and therefore is slowing the process, according to government officials. Note that out of Zambia’s total $17.3bn of external public-sector debt, commercial and state-owned Chinese lenders account for $5.5bn, making the nation by far the biggest source of Zambia’s loans, according to Finance Ministry data. Last week, rating agency Fitch warned that disagreements among official creditors or prolonged negotiations with private lenders could delay an eventual restructuring deal and IMF approval into the second half of this year or even into 2023.

The Zambian Kwacha has had a strong start to April, with the local currency having all but erased last month’s losses. The Kwacha has gained 3.22% on a month-to-date basis against the USD and is ranked as the best performing African currency among those tracked by Bloomberg. The Kwacha’s gains are more than triple that of the second best-performing currency, the South African Rand (+1.07%). 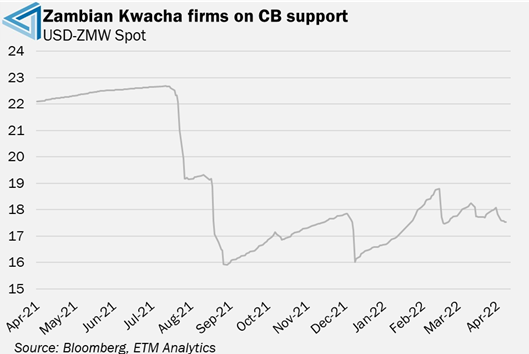 The reversal in the Kwacha’s performance can be in part attributed to the central bank’s support. The Bank of Zambia (BoZ) has injected some liquidity to cover strategic demand pipelines in recent weeks. As the BoZ continues to steadily offload dollars in the market, ensuring there is enough liquidity to meet current demand, the Kwacha is set to remain supported in the near term.

While the near-term outlook remains favourable for the Kwacha, it is worth noting that the Kwacha remains on the back foot on a year-to-date basis, down by almost 5%. Going forward, aside from central bank intervention,  the finalisation of the International Monetary Fund programme will also be key to the currency’s performance. Approval of the programme could provide some fresh impetus for the Kwacha and potentially see it potentially erase those year-to-date losses and rally further. However, a potential delay in the programme suggests Zambia’s fragile fiscal position will remain a headwind for the local currency.

Angola is in focus at the start of the new week following its successful Eurobond issuance late last week. Angola successfully sold $1.75bn in 10-year Eurobonds on Thursday last week, making it the second African country to tap the international bond market since the start of the Ukraine war. Note that this was also Angola’s first Eurobond sale since 2018. 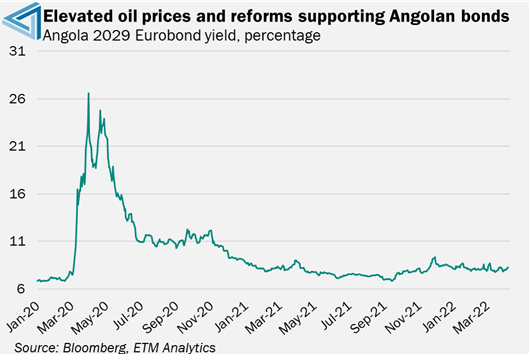 Notwithstanding the adverse global conditions, demand for Angola’s Eurobonds was strong, with investors offering to purchase more than two times the amount of bonds on offer. The 10-year bonds sold at a yield of 8.75%, less than the initial guidance. The successful Eurobond sale comes on the back of a completed program with the International Monetary Fund last year and a solid economic recovery driven by surging international oil prices.

The strong demand at last week’s Eurobond auction shows that investor sentiment towards Angola has improved markedly following the significant shift in fiscal policy and the rally in oil, which has boosted foreign currency inflows into the country as well as tax revenues. Angola was one of the only countries during the Covid-era that pushed ahead with debt consolidation measures, which was viewed in a positive light by investors.

The government said that the funds raised in Thursday’s Eurobond sale would be used to refinance or repay outstanding debt or for its budget. The Angolan government said at the end of March that it aims to buy back as much as $750mn of its outstanding Eurobonds maturing in 2025 and 2028 after issuing new USD-denominated debt.

While fiscal risks in Angola remain elevated, the prudent shift in fiscal policy has put the country on a more sustainable debt trajectory and has led to a number of credit rating upgrades. Looking ahead, with oil prices expected to remain elevated and the government committed to its reform agenda, we remain bullish on Angola.

On the economic front, South Africa made its way back into the spotlight on Friday as investors honed into the latest business confidence report. South Africa’s SACCI business confidence index came in at 95.6, higher than the reading in January and higher than economists’ expectations of 92.5. However, the index was lower compared to levels seen for the same period last year, although it still shows a positive trend. 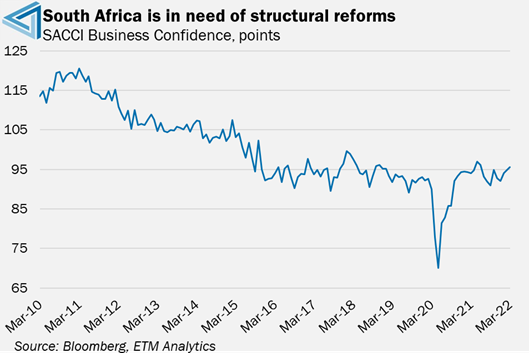 Overall, the index shows that South Africa needs to prioritise reforms, focus on increasing investment and create a better short-term business climate in order to promote growth in the economy. In order to capitalise on higher commodity prices stemming from the Russia-Ukraine invasion, South Africa urgently needs better rail and port facilities to all for its productive sector to improve.

If the private sector is able to create more jobs and the government can provide an enabling business environment, we may see business confidence in South Africa continue to rise in the coming months. That said, it will take the implementation of meaningful structural reforms in order to see a significant improvement in business confidence and a notable improvement in economic growth. While we have seen some progress on the reform front, the implementation of reforms has been slower than what investors have been looking for.