2021 Themes: Fiscal consolidation, but not yet

The pandemic has had a significant impact on debt around the world, as governments, corporates and banks alike borrow to cushion the impact and finance spending. In advanced countries, public debt is expected to increase by 20ppts of GDP this year compared with 2019, according to IMF WEO projections. 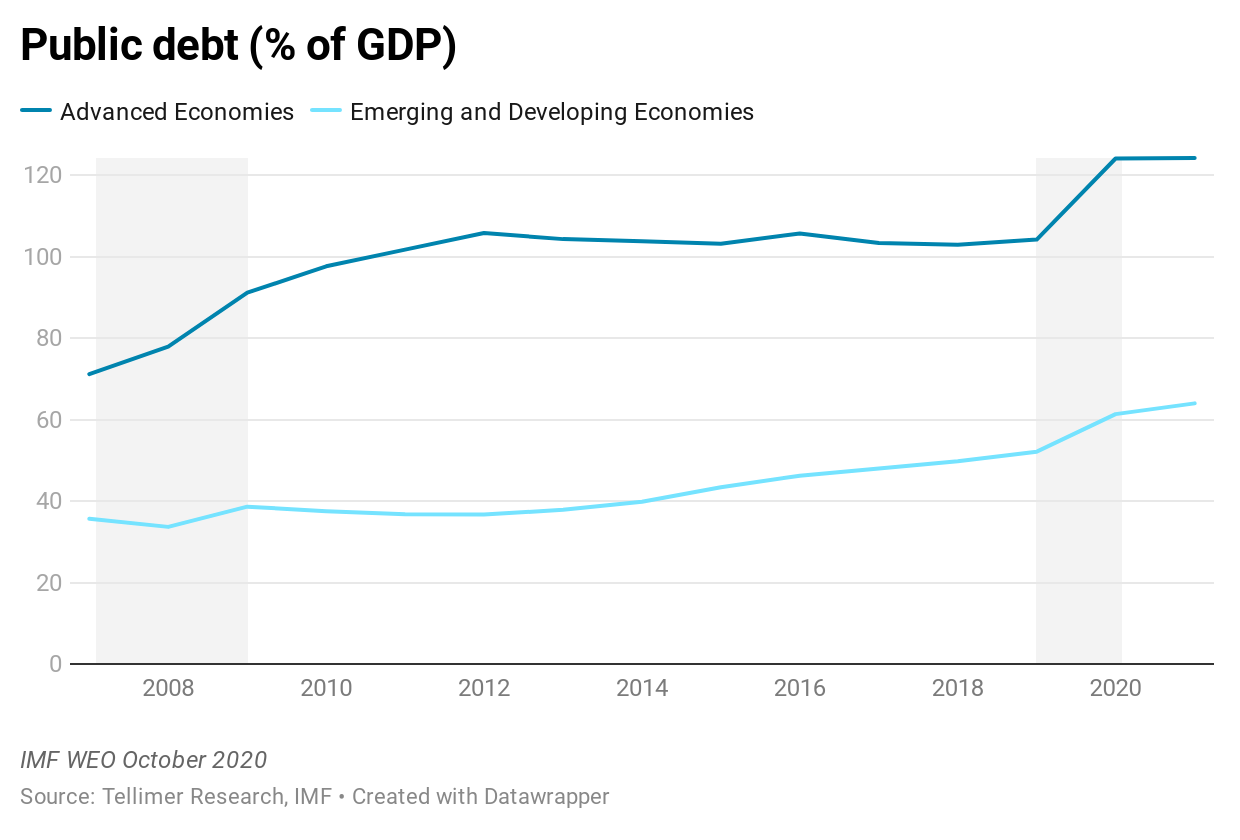 That rivals the increase seen during the global financial crisis (GFC), although that was 20ppts over two years (2007-09). In emerging markets, the impact is more pronounced compared with the GFC, with public debt expected to increase by 9ppts of GDP this year over 2019 versus a 3ppts increase during the GFC. Moreover, the increase is coming from a higher base given the increase in public debt in EM since 2014. And, within EM, there are important regional differences, as emerging Europe, developing Asia and Latin America see sharper increases.

More worryingly, another key feature of the GFC is that the rise in government debt became locked in. It wasn’t reversed. Arguably, this situation was sustainable given low global interest rates. That global interest rates look set to remain low for long provides some breathing space again this time around, although policymakers risk complacency – and a future debt crisis – if they think a laissez faire approach will work again.

Restoring fiscal sustainability is therefore set to become a key challenge for EM policymakers going forward (see the IMF managing director’s blog ahead of the G20 Leaders’ Summit in November 2020 here). If the world is to avoid locking itself into permanently higher debt, which may have macro ramifications, not least for EM, countries will need to pursue extensive fiscal consolidation. As an indication of the size of the task ahead, the fiscal deficit has widened by c6ppts of GDP on average across emerging markets in 2020. 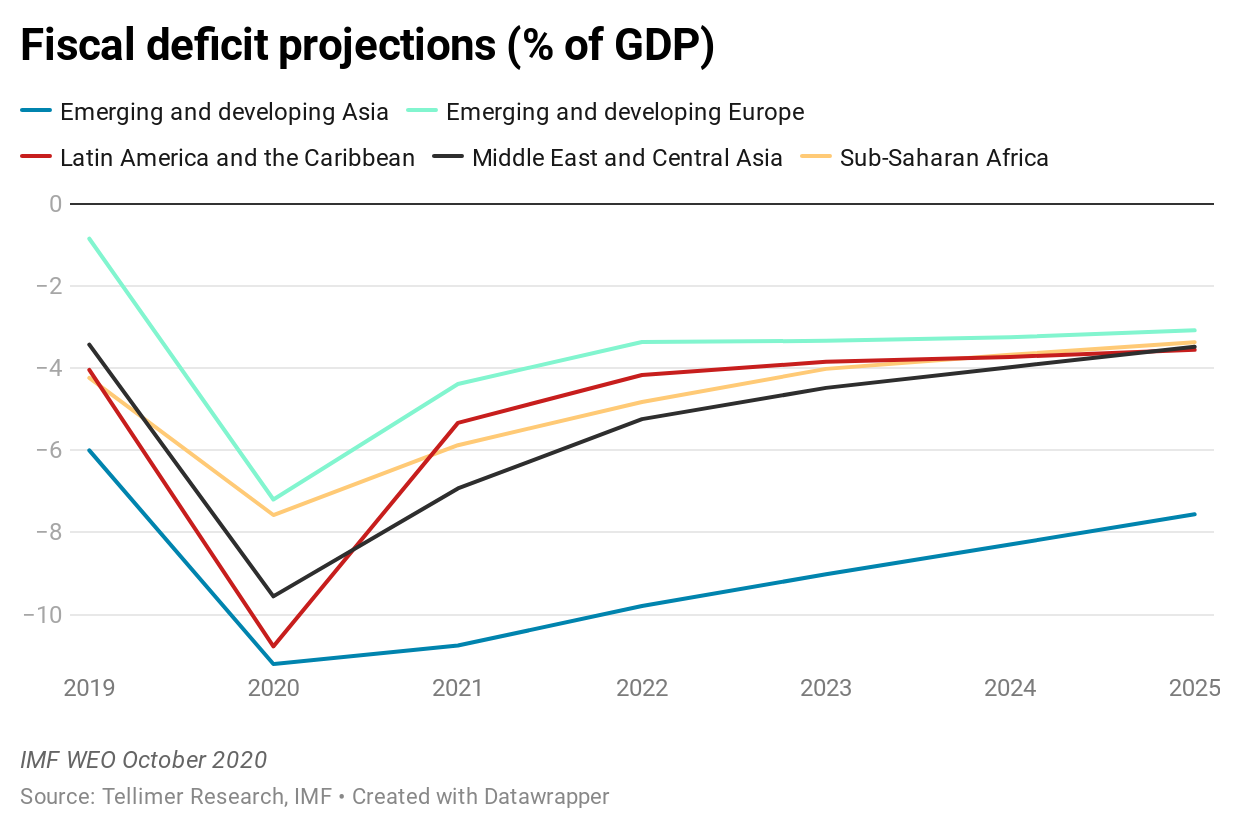 Fiscal consolidation is going to be easier for some than others. It may be easier to do for countries that see a cyclical V-shaped recovery, and for those that came into the crisis with stronger fundamentals (lower pre-crisis deficits and debt burdens). But for countries that experience structurally weaker growth (eg due to the loss of important sectors, such as tourism, or economic scarring), or with structurally weaker fiscal positions, consolidation will be much harder.

How long will it take?

It’s going to take three years, on average, to return fiscal deficits to pre-Covid levels. In a broad sample of over 70 emerging market and developing countries in the IMF WEO database, excluding energy-intense producers and fragile states, the median length of time for fiscal consolidations is three years, defined as the length of time (in years) it takes for a country to return its fiscal balance to, or close to, its pre-pandemic level – 53% of countries in our sample take three years or less. (See the charts of projected fiscal deficit paths by category of country below.)

There is also a positive correlation between the extent of the fiscal damage (increase in the fiscal deficit) and its persistence (length of time it takes for the deficit to recover) – ie the bigger the hit, the longer it takes to recover.

Some countries may do it quicker. Among bigger countries that saw more significant fiscal deteriorations (therefore indicating a bigger challenge), these include Serbia, Brazil, the Dominican Republic and Paraguay (two years), although there might be questions over the credibility of such rapid adjustments, especially in countries with poor fiscal track records. We also note the commitment among West African Economic and Monetary Union (WAEMU) members to return the deficit to the regional convergence criteria by 2023.

But some will take much longer. Of course, with half of our sample implementing fiscal consolidation within three years, that means half (47%) take longer. Ghana takes four years. And some countries never recover to where they were pre-pandemic, and their deficits stabilise at much wider levels. Among bigger markets, these include Croatia, El Salvador, India, the Philippines, Poland, Romania, Thailand and Turkey.

The slower pace of consolidation, or wider deficits that result, may undermine market sentiment, especially for those countries with pre-existing debt sustainability concerns or now higher debt burdens; for example, Ghana (with public debt of 77% of GDP), Croatia (88%), El Salvador (89%) and India (89%), although the composition of the debt (domestic versus external), creditor composition (commercial versus concessional), currency composition (local currency versus foreign currency) and maturity structure will also be important factors.

How fiscal consolidation is implemented also matters. Research suggests large fiscal consolidations are more successful when they are multi-year and expenditure-based (cutting government spending). That doesn’t mean there isn’t a role for revenue-based measures, though, especially in countries where tax bases are low relative to peers. The IMF recently highlighted the need for the retooling of tax systems to mobilise revenue in an equitable way.

Phasing is also important. Multi-year fiscal consolidations risk adjustment fatigue, which may point to upfront consolidations. However broad-based and backloaded adjustments have been shown to be equally effective in some cases. This probably means that a case-by-case approach, suited to a particular country’s circumstances, is best.

When should it start?

Learning the lessons from the GFC, the IMF cautions that policymakers should not withdraw policy support too soon, although this will be a finely balanced exercise for many EM and frontier markets that lack fiscal space and where debt sustainability is a concern.

So, it’s fiscal consolidation, but not yet. That was the common refrain at the virtual IMF/WB Annual Meetings in October 2020. “First fight the war, then figure out how to pay for it”, said the World Bank’s Chief Economist Carmen Reinhart.

And, of course, some countries, especially in EM, have already come out of their own post-GFC phases of fiscal consolidation and have overseen successful fiscal consolidations over the past decade (eg Croatia, Georgia, Honduras, Jamaica, Poland, Serbia and Ukraine). The political challenge for them will be doing it again. While, for some leaders, whose poor handling of Covid does not appear to have dented their popularity, the bigger political challenge lies ahead. 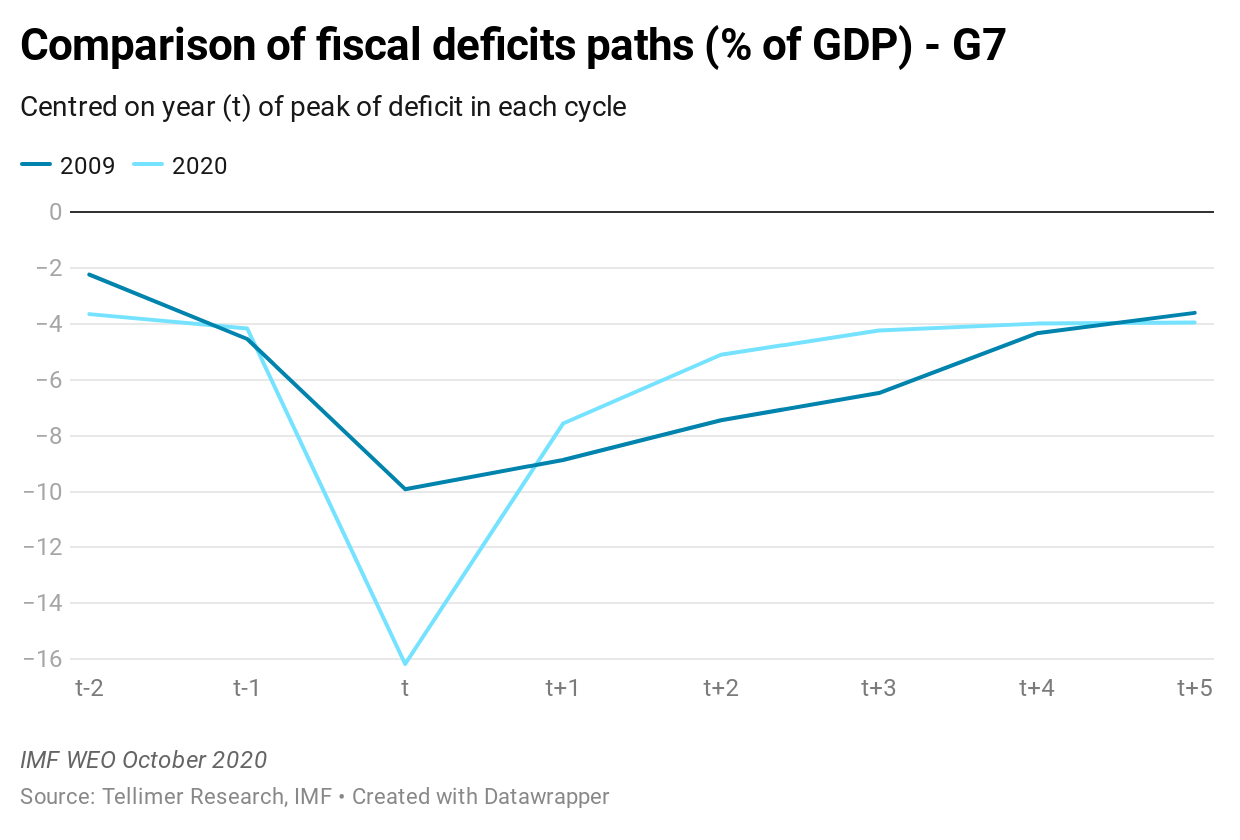 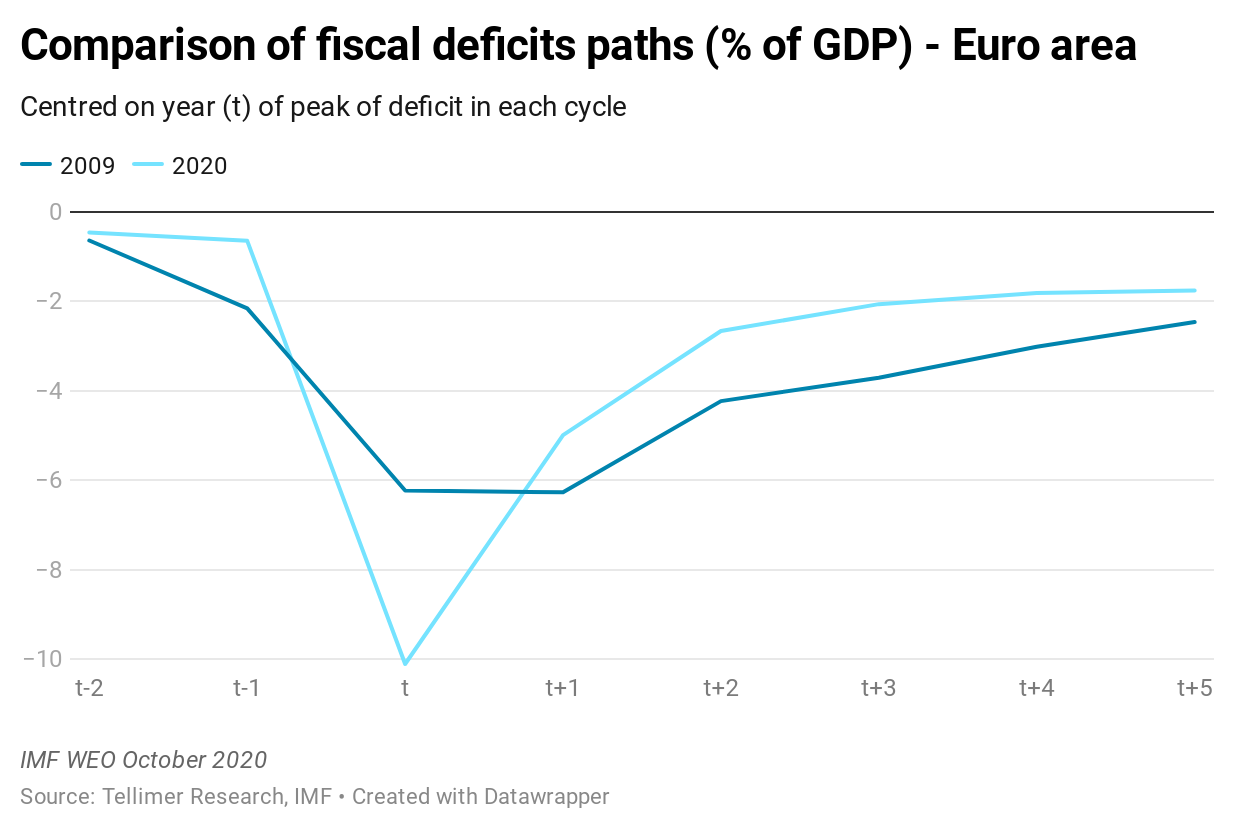 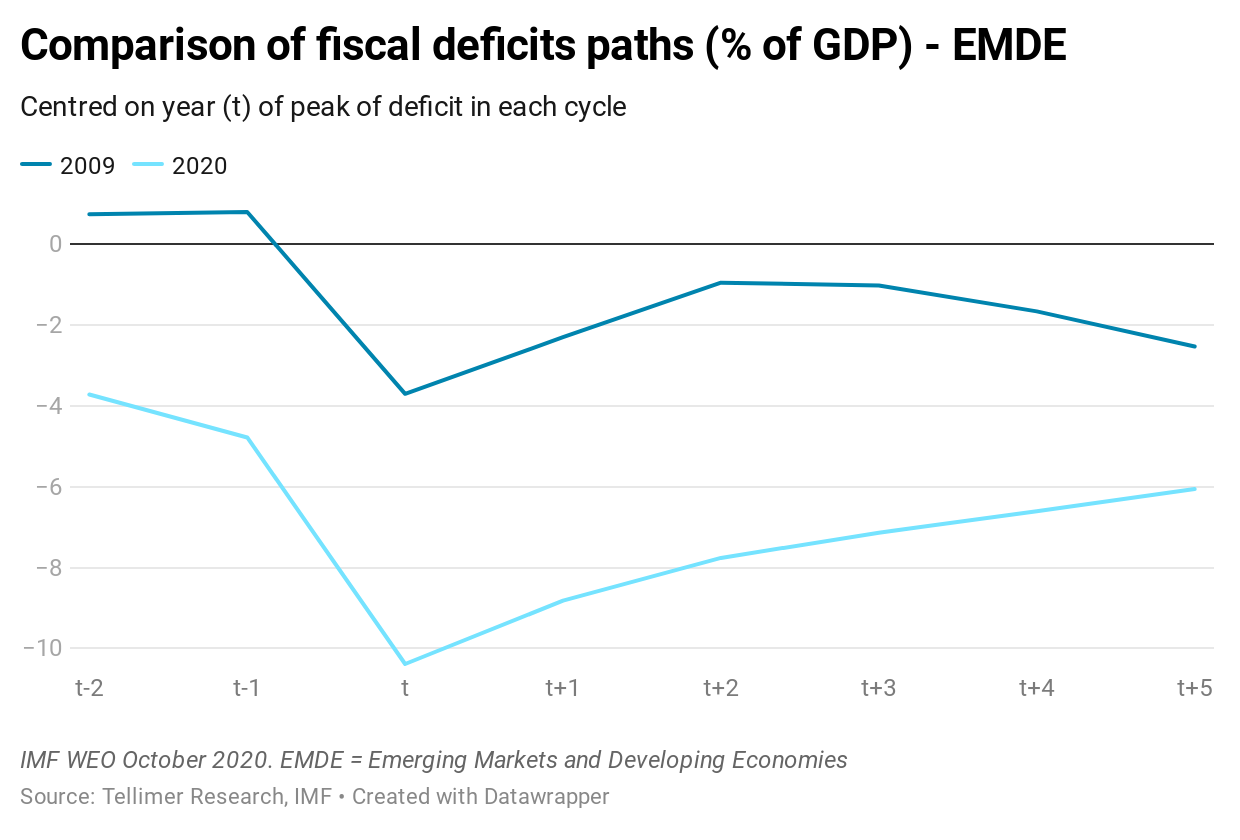