US bond yields slipped overnight, and the 10yr vs 2yr bond spread has flattened. As a result, the USD backed away from yesterday’s highs, and while it may be up slightly in the trading session this morning, it may well struggle to register significant further gains against a backdrop of deteriorating growth expectations where the market is already starting to price in central banks rethinking their aggressive tightening strategy. With so much tightening already priced into the USD, and given its overvaluation, it is especially vulnerable to a correction, something emerging market currencies could capitalise on.

In the commodity space, Brent is holding above $120 per barrel this morning, while WTI trades near $119 per barrel as the balance between supply and demand continues to point to a very tight market. The market shrugged off API data released yesterday that showed that US crude inventories increased by over 1.8mn barrels last week as, despite the increase, inventories remain at nine-year lows when seasonally adjusted.

Kenya: Ahead of the August 9 polls, opposition leader Raila Odinga has vowed to restructure public debt, increase social spending and deliver double-digit growth if he becomes president. Odinga, who is running for the fifth time, said that his administration will seek to actively pursue debt-relief negotiations and disclose the terms of borrowing as part of plans to manage the country's finances better. According to Odinga, the plan is to "restructure and re-profile Kenya's debt burden for future generations." Odinga added that promoting public-private partnership models in funding projects will also be a priority. His main opponent Deputy President William Ruto has also pledged to rein in government spending. Ultimately, the winner will have to contend with a rising debt burden and a country at high risk of debt distress, according to the International Monetary Fund.

Kenya: Kenya is considering alternative funding options as it is becoming increasingly "difficult" to issue Eurobonds. According to National Treasury Permanent Secretary Julius Muia, the government is looking at external funding options as "yields on bonds are unnecessarily elevated." Muia said that "we are pursuing various options at the moment in order to keep financing costs as low as possible, but the Eurobond route is looking at a little bit more difficult than before." According to Muia, the government is committed to funding the budget but is mindful of the tightening of global financial markets. Note that as major DM central banks such as the Federal Reserve and ECB continue to tighten monetary policy, it is going to be increasingly difficult for African countries to issue Eurobonds in the coming months.

Mali: In the latest move in negotiations with regional bloc ECOWAS to lift sanctions crippling the economy and resulting in defaults on several payments in the regional financial market, Mali's military Junta has indicated that it will take 24 months from March 2022 to restore civilian rule after the August 2020 coup. Mali's military leaders have been under pressure to restore democracy since they removed the government and failed on a promise to hold elections in February, prompting sanctions from ECOWAS.

Tunisia: Finance Minister Boughdiri yesterday said that the government expects to agree with the IMF on resuming talks on an economic rescue package in the next few days. As part of the preparation for these talks, Boughdiri added that Tunisia will begin gradually reducing food and energy subsidies next year. The move will reduce subsidy spending that has risen to 4.2bn dinars ($1.4bn) in 2022 from 3.2bn dinars the year before.

South Africa: SA’s GDP growth beat market expectations by quite some margin and elevated nominal, deseasonalised GDP back to pre-covid levels. The data highlights how there is still some life left in the SA economy and that lifting further restrictions, allowing for the private sector to play a larger role, and de-regulating could offer a tremendous opportunity when the global economy is facing some major headwinds. Increasingly, the notion that the global economy will head into a significant downturn and that many economies could find themselves in a recession is starting to permeate markets. A recent report from the World Bank indicated that it would be very difficult for many economies to avoid a recession in 2022 as inflation remains high and central banks are aggressively tightening monetary policy to rein it in.

Forex: East African currencies are a sea of red as trade dynamics continue to worsen

It has undoubtedly been a challenging first half of the year for currencies in the East Africa region. For context, East African currencies tracked by ETM have broadly recorded losses on a year-to-date basis against the USD, with the exception of the Rwandan Franc. Surging global oil and food prices have weighed heavily on the trade accounts of East African countries. Adding to the headwinds has been a decline in tourists from China, Russia, and Ukraine, which has weighed on foreign currency inflows into the region. This comes on the back of a significantly stronger USD, with the trade-weighted dollar up by over 7.0% since the start of the year. 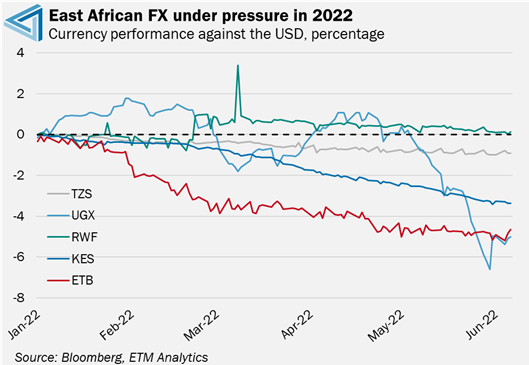 The Ugandan Shilling (UGX) has been the laggard. The UGX has lost almost 5% on a year-to-date basis. Further downside pressure has stemmed from a rotation out of local assets by investors as global financial conditions tighten with the Federal Reserve and other DM central banks hiking rates. It is worth noting that the sharp weakening in the UGX in recent weeks has prompted the central bank to repeatedly soak up excess hard currency demand and slow the depreciation. While the rate hike last week will alleviate some pressure, we expect the broader bearish bias to remain as the fundamental backdrop remains weak.

The Ethiopian Birr and Kenyan Shilling have lost around 4.45% and 3.37%, respectively. The former also continues to be weighed down by factors such as a shortage of foreign currency, heightened fiscal risks, geopolitical uncertainty, and fresh dissent since the announcement on the cessation of hostilities in the northern region. In Kenya, a dollar shortage as resulted in the Kenya Association of Manufacturers, an industry lobby, warning last week that it may create “a parallel shadow market with unwanted consequences.” The lobby group added that importers are struggling to import raw materials because they cannot access dollars at the official rate of about KES 116 per dollar, forcing them to buy at a rate of KES 120 or higher. Although the 50bps rate hike implemented last week and comments from the central bank governor that Kenya’s foreign-exchange market generates and distributes about $2bn a month, which is enough to meet all demand in the economy, could ease some of the selling pressure on the currency, we see risks remaining tilted to the upside. A growing external imbalance with Kenya’s current account balance coming under sustained pressure suggests that if unaddressed, room for further KES weakness exists.

Red flags have been triggered in Kenya after lawmakers approved the government’s proposal to raise the country’s debt ceiling as spending pressures mount ahead of the presidential election in August. Lawmakers approved a bill that raises the country’s debt ceiling by KES 1trn to KES 10trn, allowing the government to fund its KES 862bn budget deficit for the 2022/23 fiscal year.

Commenting on the matter Amos Kimunya, the majority leader in the National Assembly, said raising the borrowing limit is a very interim measure and will unlock funding for a KES 3.34trn spending plan for the fiscal year that begins on July 1. Kimunya added that “the incoming government, whoever they’ll be, would be able to look at their programs and their financing needs” and make proposals to parliament on how to manage the debt going forward.” 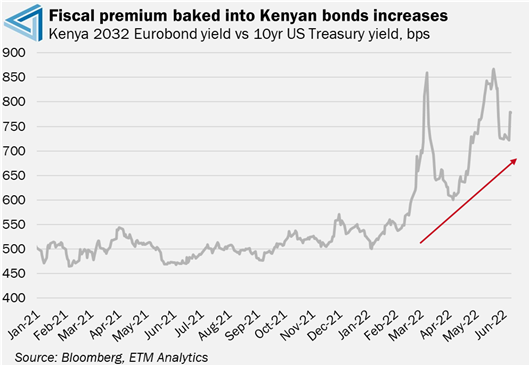 The approval of the government’s proposal to raise the debt ceiling comes as a major concern following the fiscal degradation that has materialised over the past decade, particularly during the Covid-19 pandemic, as the government ramped up expenditure to cushion the blow of the lockdown measures on the economy. Moreover, the passing of the debt ceiling increase shows that the government prioritises infrastructure spending and consumer price relief measures over debt consolidation.

Ethiopia has made its way back into the firing line of fiscal hawks after the government announced that it plans to increase spending by more than 16% to ETB 786.6bn for the 2022/23 fiscal year that starts next month. The increased spending comes as the government contends with higher than expected debt servicing and defence costs. Specifically, debt repayments are set to cost ETB 126bn and defence costs are expected to reach ETB 84bn.

Finance Minister Ahmed Shide told lawmakers on Tuesday that “it’s very essential to reinforce and maintain the country’s security system.” Recall that Ethiopia has been engaged in a civil war for most of the pandemic era, with the government fighting forces in the Tigray region. The war erupted in late 2020 and has recently ended through a ceasefire. 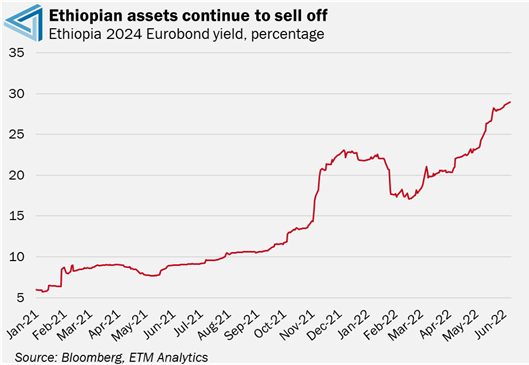 The risk that conflict in the region erupts is considerable. Moreover, it is worth pointing out that additional funds will be needed for the reconstruction and humanitarian aid for millions of Ethiopians affected by the war. The government is also under pressure to roll out food and fertilizer subsidies following the spike in food prices.

From a financial market perspective, while the ceasefire in Tigray is encouraging, Ethiopian assets continue to sell off as the fiscal outlook worsens. Ethiopia’s 2024 Eurobond yields continue to soar, currently trading just below 29%. Maturity/debt rollover risk is compounding the selling pressure on the 2024 Eurobond. While the Ethiopian Birr has stabilized in recent weeks, the broader bearish bias remains intact, with the currency losing more than 60% of its value against the USD since the start of the pandemic.