Fintechs have less pricing power than they think

Recent history showcases numerous cases of tech upstarts pricing aggressively to grow the market and then leveraging their scale to dominate. Google and Facebook are developed-world examples, Ant Group’s Alipay and Reliance Jio come to mind in emerging markets. Our surveys suggest fintech new entrants are failing to take note; most mistakenly believe they have good pricing power, and are likely losing growth opportunities as a result.

In this 13-page report, the latest in our series on the emerging market fintech space, we analyse the results of our proprietary survey of 700 consumers, 101 fintechs and 50 incumbent firms across seven emerging markets (Brazil, China, India, Indonesia, Kenya, Mexico, South Africa) to highlight key pricing-related issues for financial products. 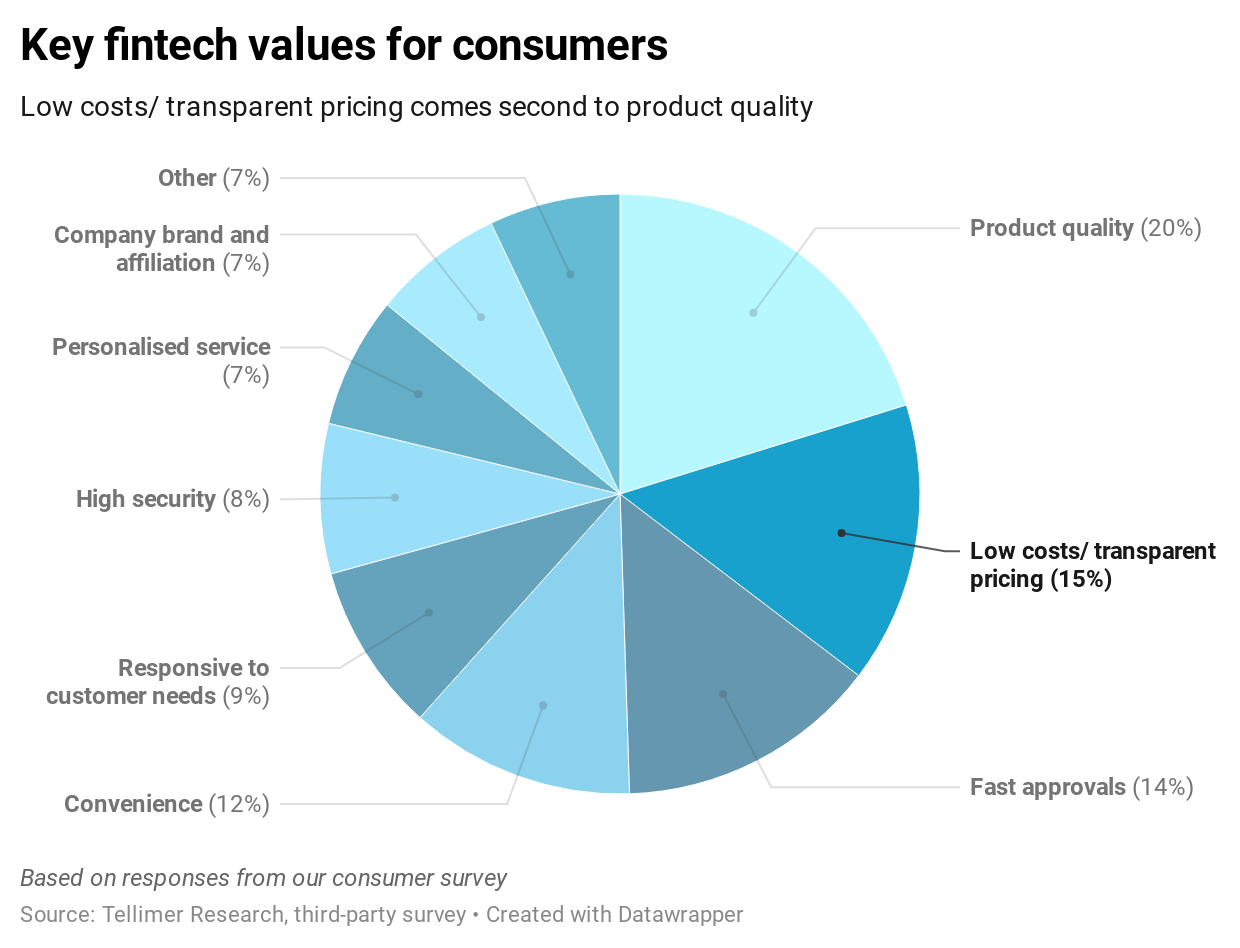 Pricing is a key element in the purchase decision for retail financial services in emerging markets. For consumers it is the second most important factor after the quality of the product; Kenyans and South Africans, in particular, appear to be price-sensitive. Competitive pricing is also cited as an important success factor by fintechs, coming second only to first-mover advantage.

Notably, Indian and Brazilian fintechs attach great importance to being able to price aggressively, as do investech and insurtech firms. However, our survey also suggests that fintechs tend to overestimate their pricing power; around 80% of them think they have moderate to strong pricing power, even as 70% of consumers tell us that low prices are important to them. Kenyan fintechs and those active in lending appear to be most complacent.

Around half of consumers and fintechs think product pricing is transparent, suggesting there is scope for improvement, particularly in China and in the insurtech segment. In terms of pricing equality, small-ticket customers tend to be short-changed most in Brazil and in insurtech.

Regarding the ease of switching from one product provider to another, around 60% of fintechs and consumers think that this is straightforward; switching seems to be easiest in South Africa and China and in the lending and payments sectors.

Turning to incumbents, they seem to show the same biases as fintechs in terms of overestimating their pricing power, but when it comes to repelling fintechs, lowering product prices is one of their common strategies. 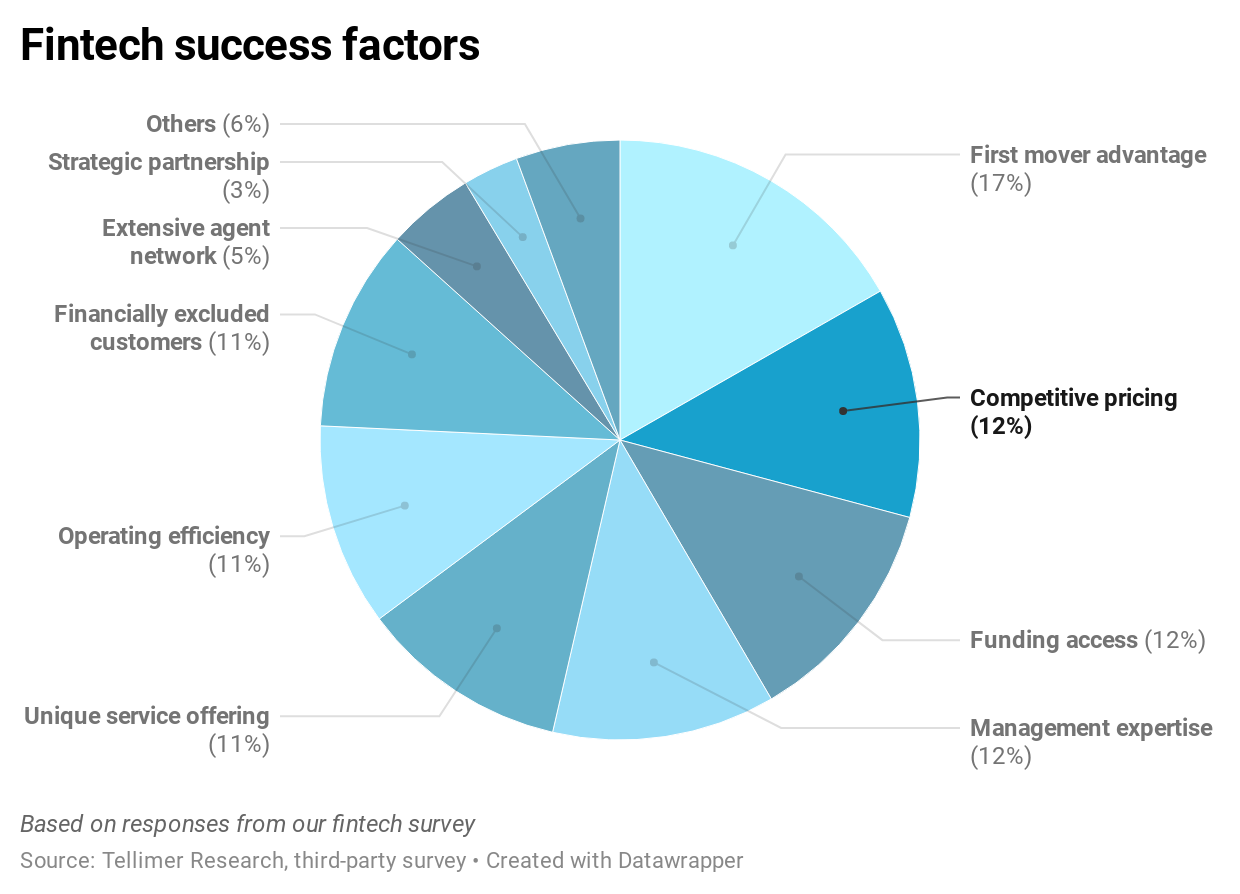 Fintechs seem to be overestimating their pricing power

Pricing is important for fintech customers: Our consumer survey clearly shows that product pricing is one the main inputs affecting the purchase decision; 20% of respondents think that pricing is the only criteria in their decision-making, while a further 50% think that it is moderately important. Pricing is more important in Kenya and South Africa. It seems to be a less significant criterion in Indonesia and China. The importance of pricing for the low-income customer group is greater than the high-income group, but the differences are more notable in China and Kenya. 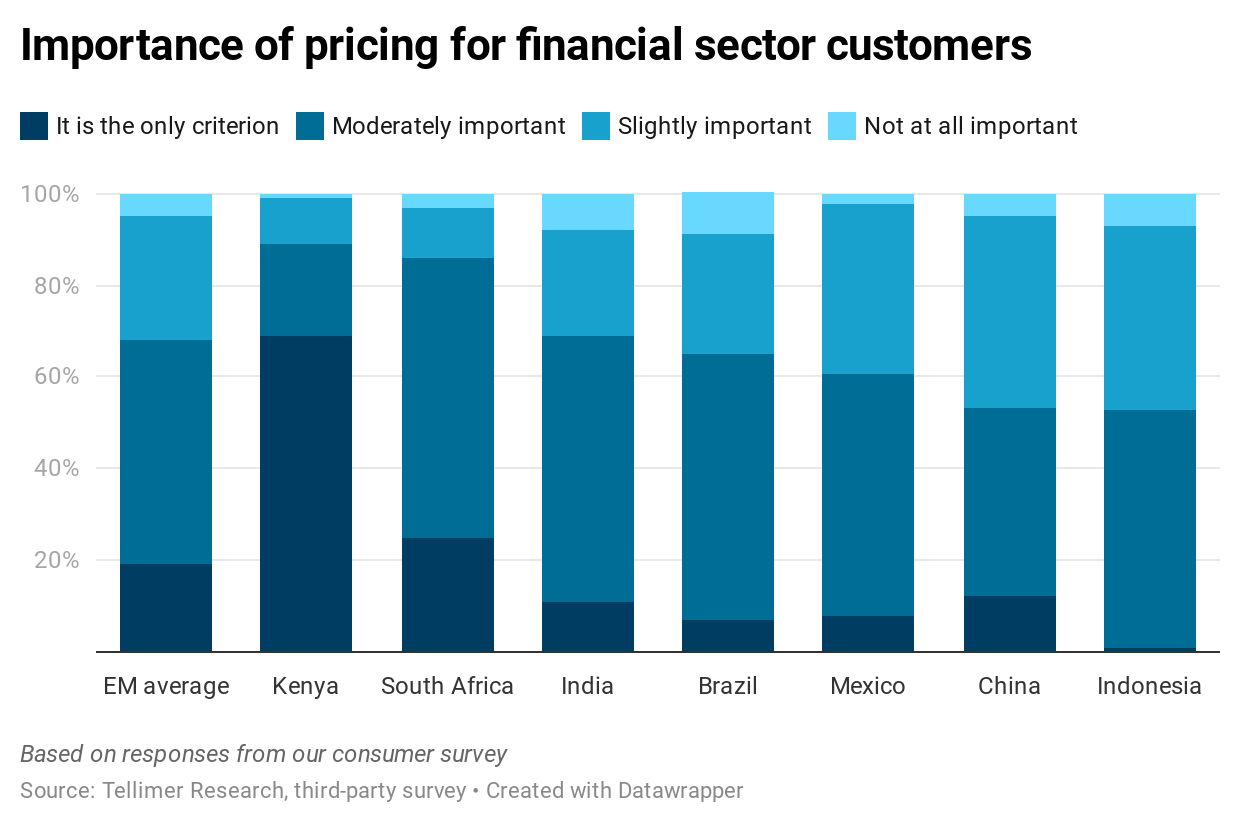 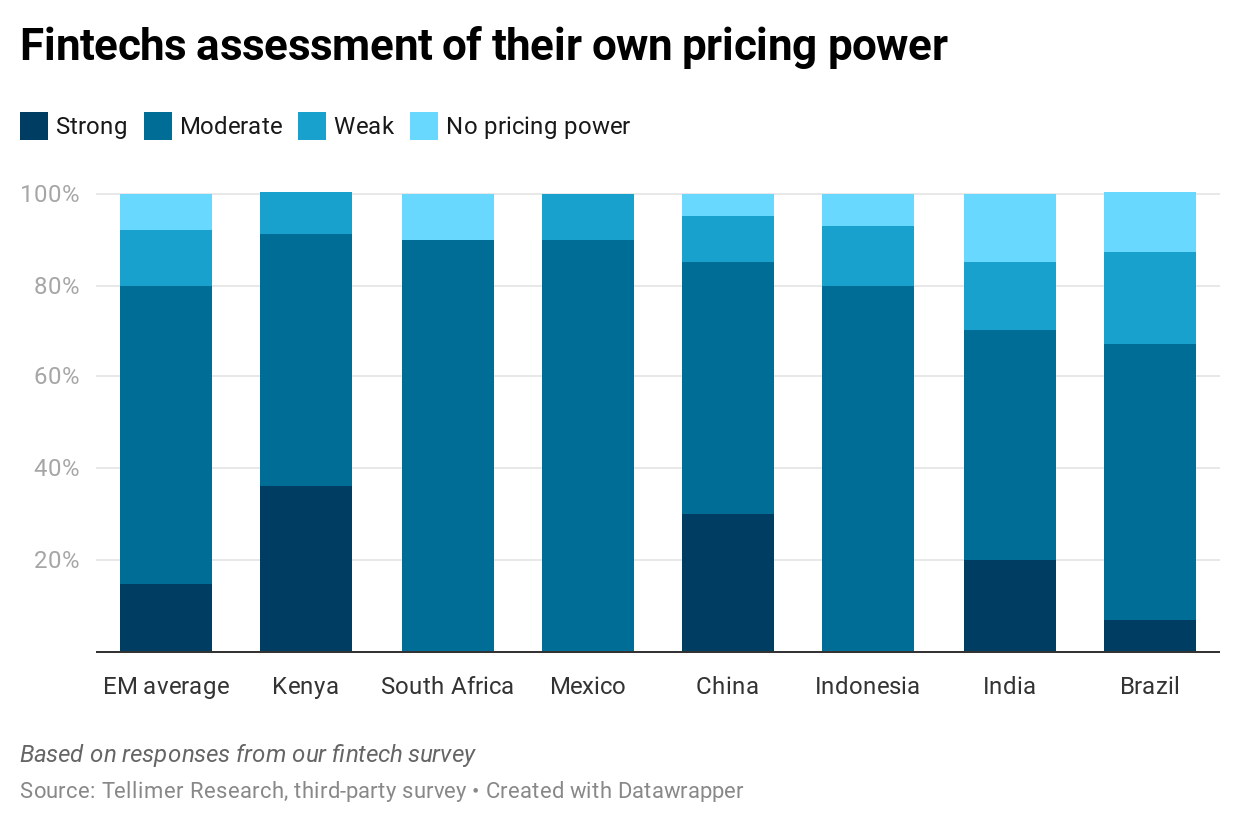 Our surveys suggest there are strong pricing tensions in the market. Comparing the results of the consumer and fintech pricing surveys above indicates that fintechs are overestimating their pricing power. While 20% of consumers indicate that pricing is the only criterion on which they base their purchase decision, only 8% of fintechs accept that they have no ability to set prices. The biggest discrepancy in views appears to be in Kenya; fintechs in this market may be alienating potential customers by pricing their products above the level the market is willing to bear.

By product, insurtech and investech companies appear more willing to price competitively than blockchain and payments. Insurtech and investech products can be more easily tailored to the specific needs of the consumer, and pricing transparency is typically poor. But our survey suggests that these features are more than offset by the more fragmented nature of these markets versus others (such as payments).

Pricing transparency has room to improve

Our survey indicates that 50% of fintechs and 55% of consumers think product pricing terms are clearly communicated. While it is comforting that the results of both surveys are broadly in line, it does mean there is scope for product terms to be more clearly communicated in roughly half of all cases. Improved transparency is one way that fintechs can grow the size of their market. 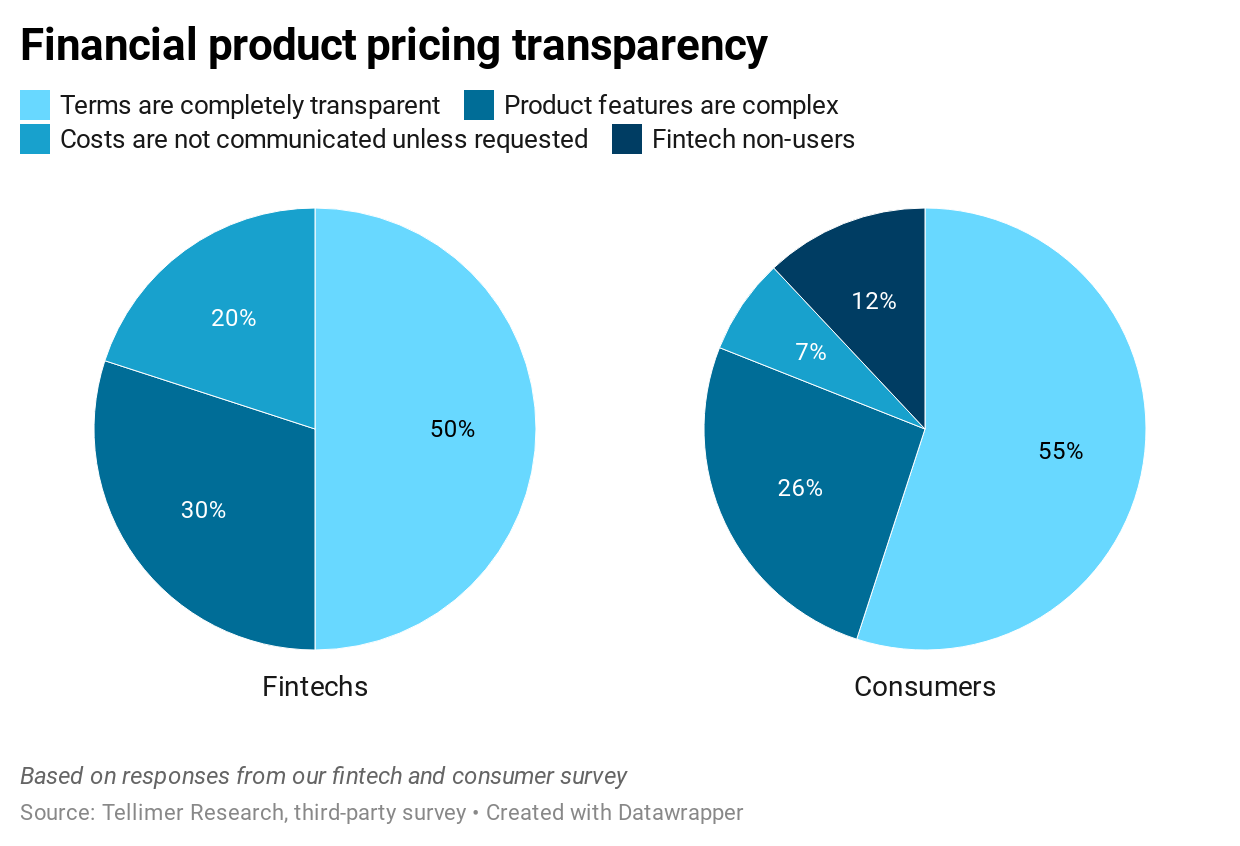 Transparency seems to be best in Kenya and South Africa, and for lending fintechs; and worst in China and Brazil, and for insurtech providers. 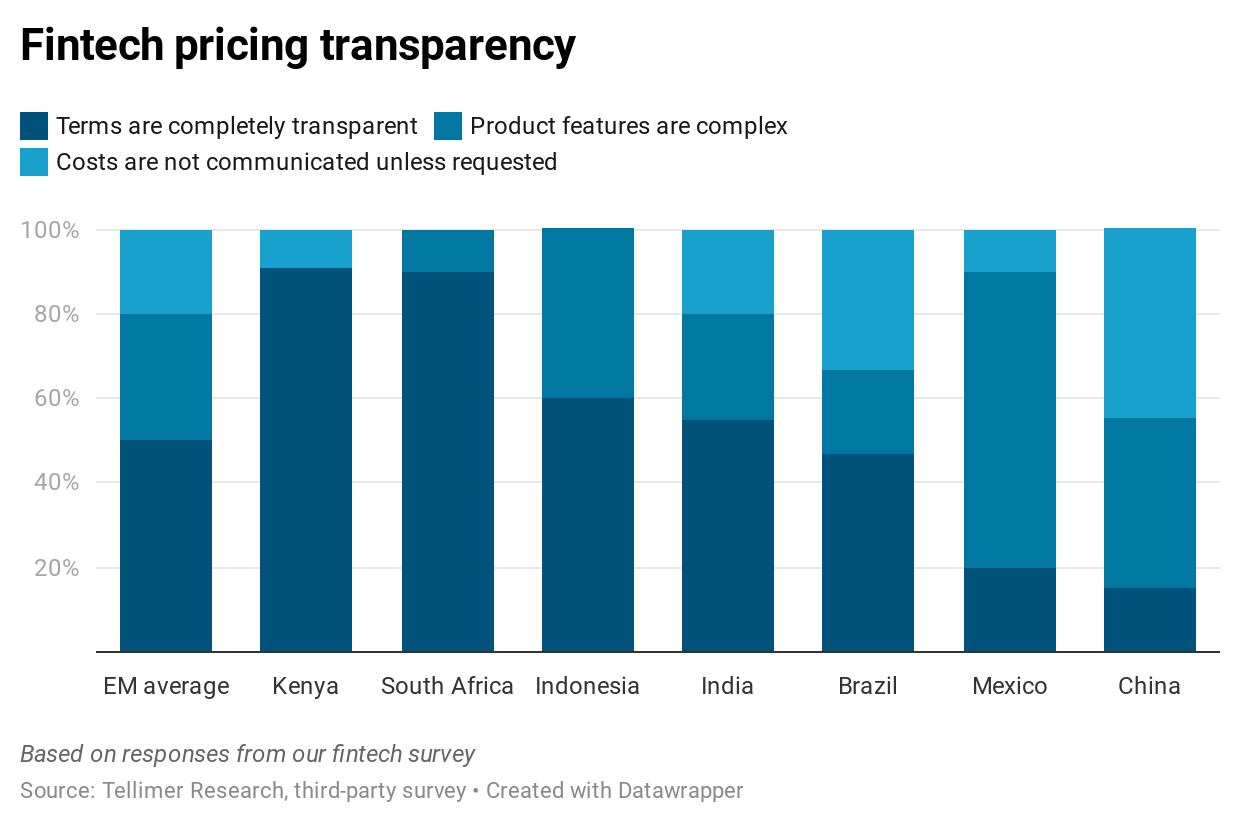 The incidence of discriminatory pricing appears to be limited

According to our survey, most fintechs adopt relatively uniform pricing structures for all customers. Around 15% of fintechs have more favourable pricing for larger tickets. For example, a flat fee structure works out cheaper if the transaction is of a larger size. Somewhat surprisingly, in almost 10% of cases, fintechs believe their smaller customers benefit from superior pricing. This could reflect an ability-to-pay rather than a cost-plus pricing model, or fintechs enticing customers with loss-leader products before cross-selling or up-selling to them.

Among our surveyed countries, fintechs in Kenya and in investech tend to have more favourable pricing structures for small-ticket customers; for example, Pesapal (Kenya, payments) and Savart (India, investech). This could be one way that Kenyan fintechs cater to address the high price-sensitivity of customers in this market (as highlighted above) without having to drop prices for all their clients. In contrast, Brazilian fintechs and insurtechs more frequently favour large-ticket customers, such as Stone (Brazil, payments) and Zenda.la (Mexico, insurtech). Attracting large customers can help businesses rapidly build-up scale. 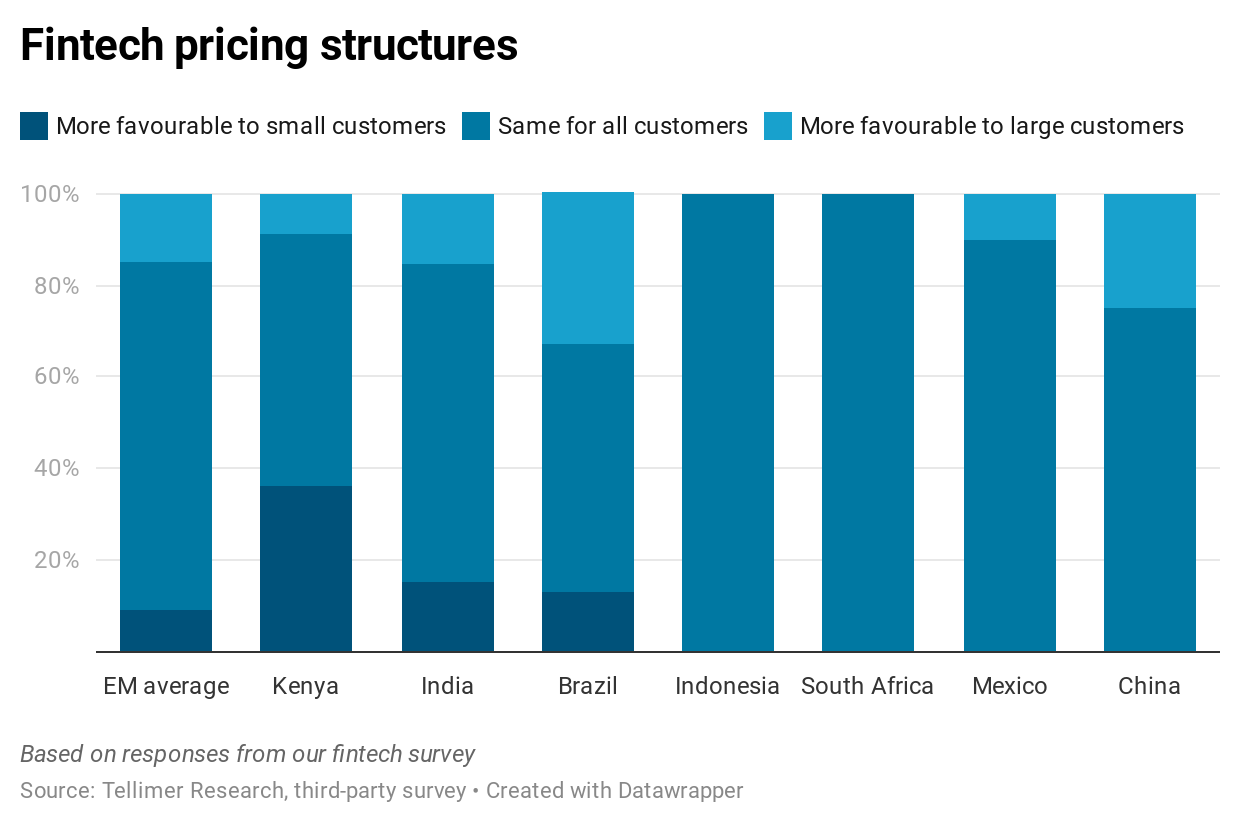 Switching barriers appear to be limited; network effects may be overstated

Around 60% fintechs and consumers think that there are no significant barriers to switching providers. According to fintechs, both financial costs/penalties and loss of access to their network of agents/merchants are the key reasons for why it is difficult for consumers to switch. For consumers, costs/penalties appear to be more of a barrier to switching than network effects; this ties in with our earlier findings (consumers are more price-sensitive than fintechs think they are).

Regarding the idea of network access as a switching barrier, this carries more weight in the minds of fintechs than for consumers. This difference in perspective is highest in Kenya and Brazil, suggesting that market-leading fintechs in these markets may need to keep pricing competitively and innovating continuously rather than relying on scale as an entry barrier. 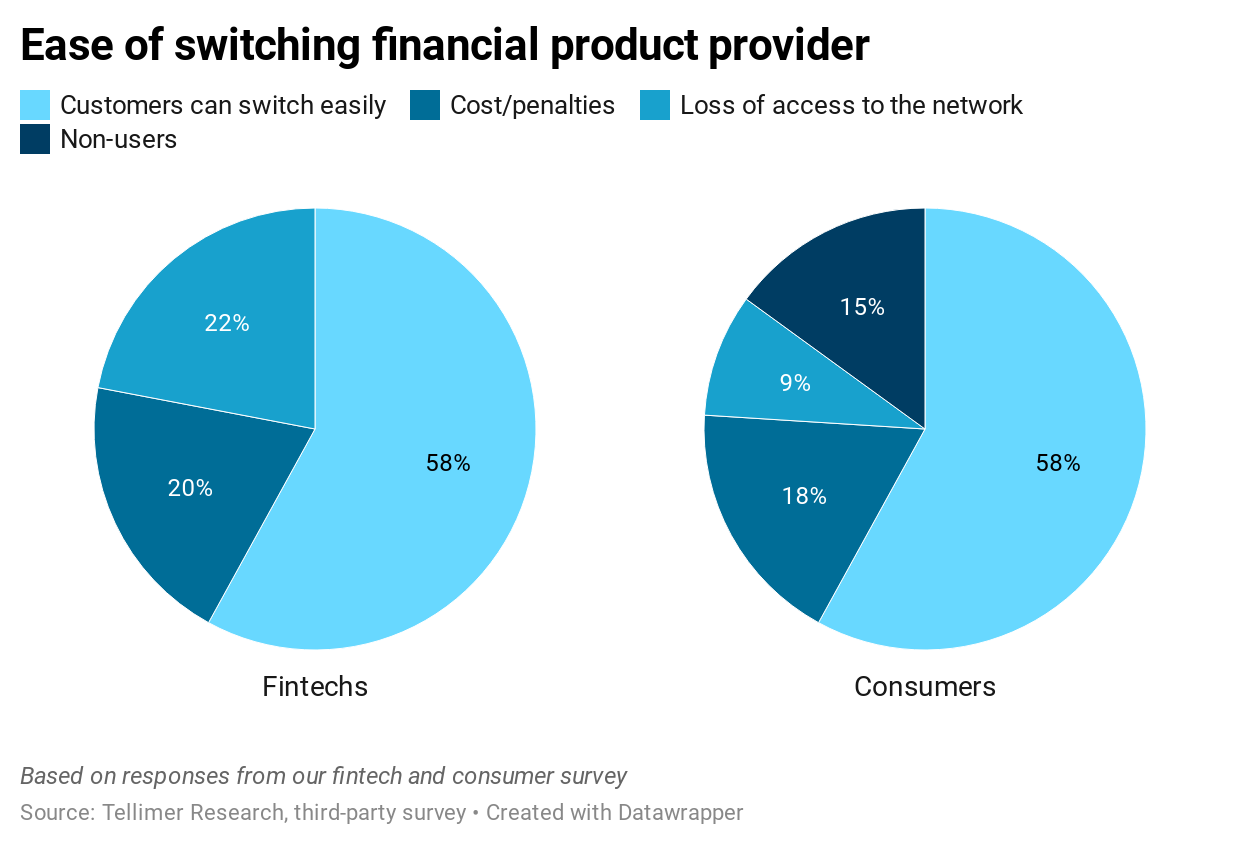 By country, more Chinese fintechs think switching is difficult than elsewhere; mainly due to the financial costs/penalties involved. South African fintechs believe switching costs are low. By product, insurtechs tend to think their customers have high switching barriers; this may be due to the tailored nature of these products. In contrast, lending fintechs believe their customers can switch easily to other providers; pricing and loan size are typically key attributes that consumers focus on. Companies that think switching is difficult include Pingpong (China, payments) and Toffee Insurance (India, insurtech). Those that think their customers can switch easily to other providers include SnapScan (South Africa, payments) and Geru (Brazil, lending). 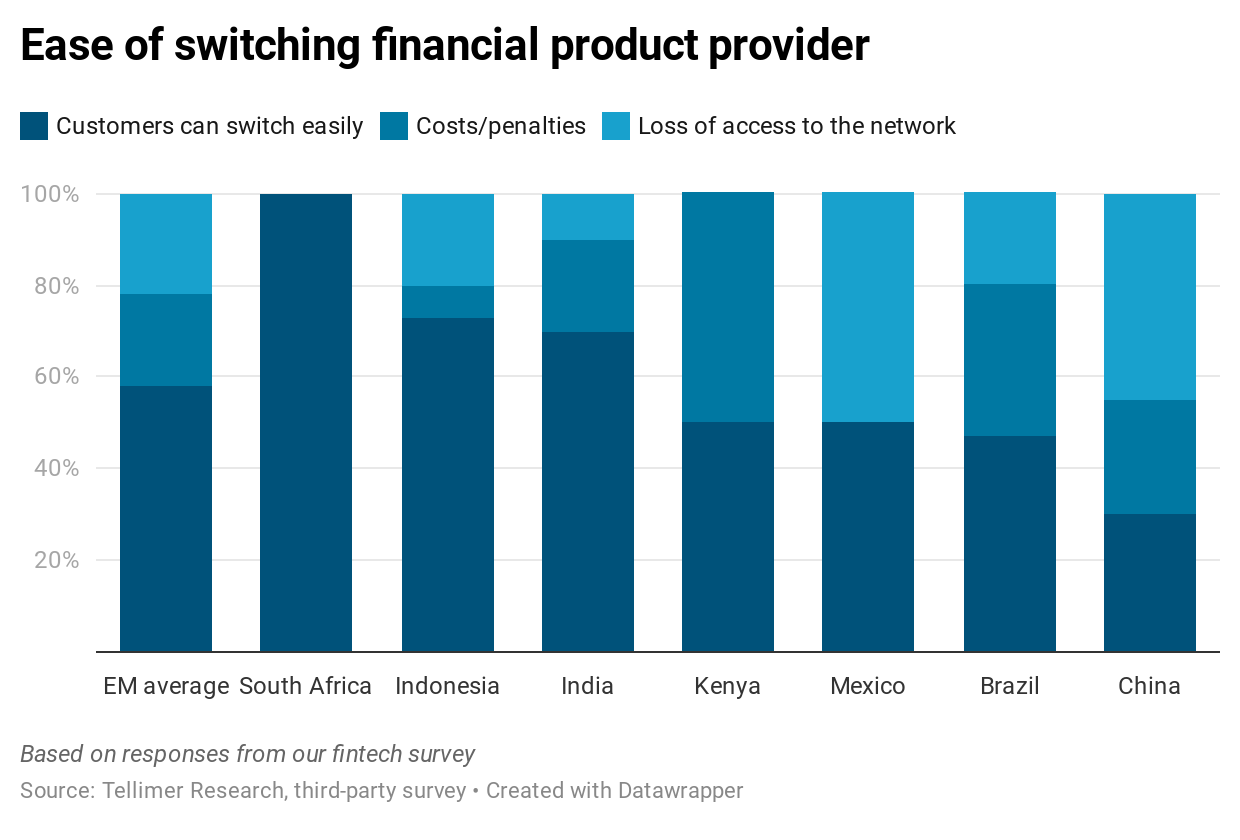 Competitive pricing is a crucial driver of fintech success

We asked EM fintechs which factors were most responsible for their success. Our results show that competitive pricing is the second most important success factor for fintechs, after first-mover advantage but ahead of operational efficiency and unique service offerings. By country, pricing seems to be a more important driver of success in India and Brazil compared to South Africa and Mexico. By product, more insurtechs and investechs cite competitive pricing as a key to their success. Companies that cite competitive pricing as a success factor include Zerodha (India, investech) and Byebnk (Brazil, blockchain). 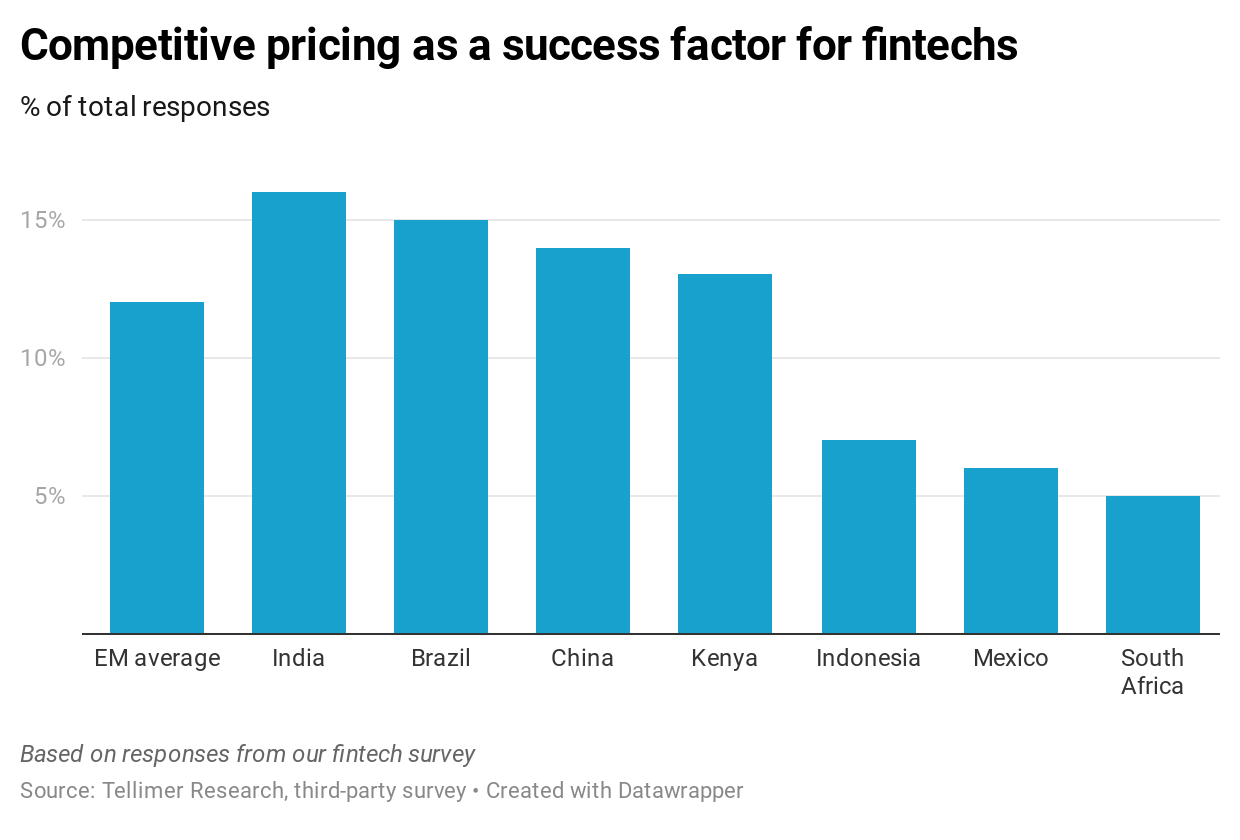 Our surveys of EM consumers, fintechs and incumbents firms have several overlapping areas concerning pricing. In general, incumbents seems to show the same biases as fintechs in terms of overestimating their pricing power and the barriers to switching. Consumers tend to regard fintechs more highly in terms of competitive pricing, and incumbents more highly in terms of pricing transparency, with no difference between both provider groups when it comes to switching costs. Incumbents that think they provide more competitive pricing to their customers include City Union Bank (India) and Telefonica Brasil. 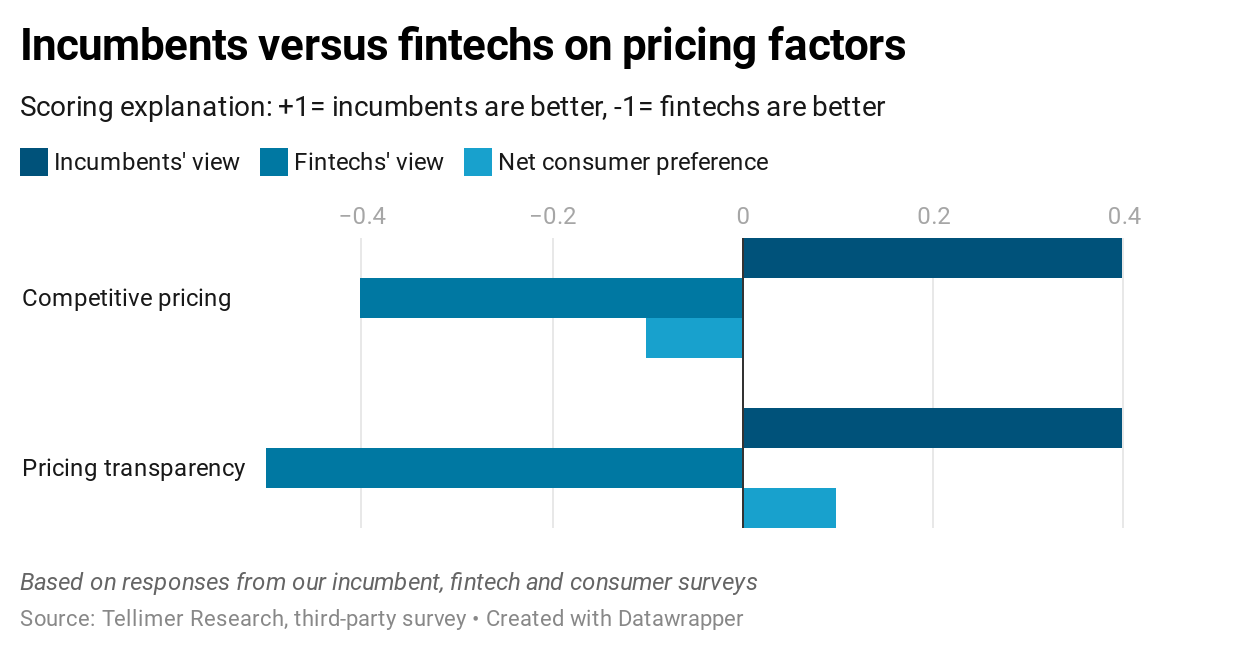 Incumbents are willing to price aggressively to compete with fintechs

Our survey shows that lowering product prices is a popular strategy among incumbents to counter the fintech threat, although less important than technology investment, data analysis and cost-cutting. Incumbents in Mexico and South Africa appear to be more willing to price aggressively compared to those in India, where aggressive pricing is not being adopted as a defensive measure by any of our surveyed incumbent firms. Incumbents willing to adopt more aggressive pricing to compete with fintechs include Bank Rakyat (Indonesia) and ScanGroup (Kenya). 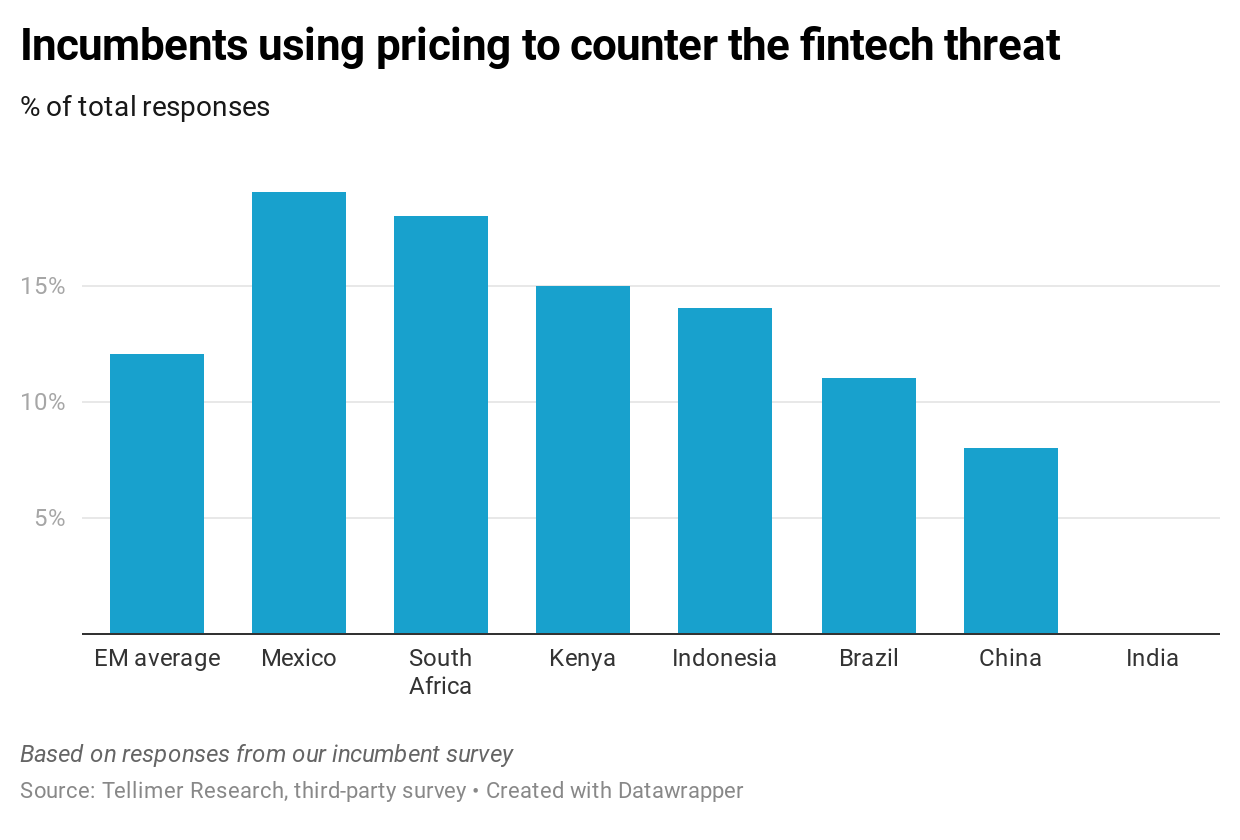 The fintechs innovating to provide cheaper prices to their customers

Our surveys show the clear importance of pricing to fintech customers. Based on our desk research of 2,610 fintechs in the seven surveyed EMs we highlight below a handful of firms that are taking innovative approaches to offer competitive pricing to their customers. 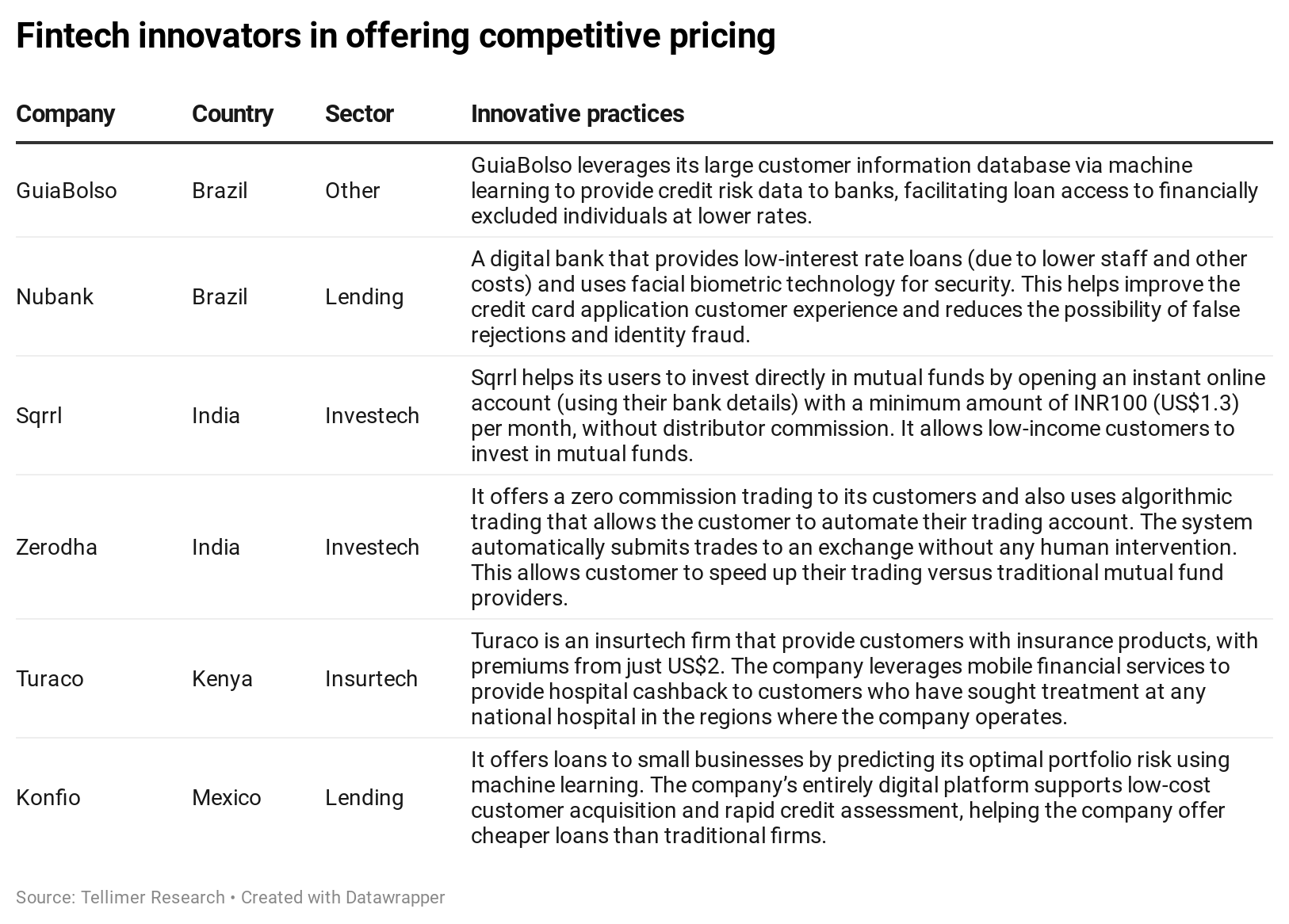