The initial surge in the USD on the Fed's hawkish comments quickly gave way and reversed to end the session lower. Immediately after the initial statement, the bid tone appears to have been rotation towards the USD amid widening monetary policy differentials with other central banks. However, as equity markets stabilised and recovered, it became clear that much of this news had been priced in, and the USD lost momentum. A bout of profit-taking on the USD then set the stage for a general reversal of many markets. Whether or not that is sustained remains to be seen. Monetary conditions will become less accommodative and that will likely be more USD supportive than not.

Egypt: Policymakers expected to leave the benchmark interest rate at current levels. That said, we do see an outside risk for a rate hike. Recall that in October, the Central Bank of Egypt left the deposit rate at 8.25% and the lending rate at 9.25%. This was the ninth consecutive meeting that policymakers have held, following a combined cut of 400bps in 2020. Inflation in urban parts of Egypt slowed on both a m/m and y/y basis last month, placing it well within the bank’s target of 5% and 9%, providing the central bank with room to stay accommodative and still maintain the attractiveness of Egypt’s real interest rate.

Botswana: Statistics Botswana released the inflation number for November yesterday and many will be breathing a sigh of relief as the print came in lower than the October reading, potentially signalling a topping out of inflation, although we would suggest waiting for one or two more prints before making that call. The year on year inflation reading came out at 8.6% versus 8.8% in October. The Trimmed Mean Core Inflation reading also fell by 0.2% to record 8.0%, while the Core Inflation rate equally shed 0.2% to print 7% in November. This will give the Bank of Botswana some comfort that its assessment of the situation is correct and that the inflation rate will move back within its target of 3-6% by the second half of 2022.

Gabon: After the first review of the extended fund facility, the International Monetary Fund said that Gabon is gradually recovering from last year’s sharp contraction, aided by higher oil prices and an increasing vaccination rate. The IMF forecast Gabon’s economy to grow by 3% next year vs 1.5% this year but warned the recovery remains fragile and risks include the pandemic and oil prices. The IMF added that prospects for strong, durable and inclusive growth rest on growth-friendly fiscal consolidation and steady progress on structural reforms. Meanwhile, next year’s budget is seen as helping reduce public debt while allowing space for necessary social and infrastructure spending.

Nigeria: Headline inflation in Nigeria slowed to 15.4% y/y in November from 15.99% y/y in the month prior. This was the slowest pace of price growth in the economy since November 2020 and was a result of a deceleration in food price growth to 17.2% from 18.3% in October. While inflation has been above the 9% ceiling of the central bank’s target band for more than six years, it forecasts price growth to continue to slow after peaking in March. The bank said last month it expects a bumper harvest and improving security in northern Nigeria to ease disruptions to food supply. The slowdown in inflation will likely see the monetary policy committee hold its key interest rate next month to aid the economy’s rebound as international travel bans imposed after the detection of the omicron variant in passengers travelling abroad and a surge in COVID-19 cases may be a drag on its recovery.

Uganda: In a move that will likely boost the Ugandan government’s coffers, lawmakers have approved a bill for a windfall tax on oil revenue. Specifically, Uganda will levy a windfall tax once international oil prices reach or surpass $75 a barrel. The bill caps the allowable annual deduction of the cost recovery limit agreed on in production sharing agreements. While parliament did not provide any further details on this matter, it is worth noting that last month it was reported that oil companies are set to pay a 15% levy should prices surpass $75/barrel, in addition to 30% corporate tax.

South Africa:Headline inflation in South Africa printed in line with expectations in November, coming at 5.5% y/y from 5.0% y/y in the month prior. This was the fastest pace of price growth in the economy since March 2017. On a m/m basis, consumer price inflation rose to 0.5% from 0.2% in October. According to the inflation report by StatsSA, the main contributors to headline inflation were food and non-alcoholic beverages, housing and utilities, transport, and miscellaneous goods and services prices. Meanwhile, core inflation edged marginally higher to 3.3% y/y from 3.2% y/y in October. High fuel and administered price inflation remain concerns going forward. Therefore, inflation risks are tilted to the upside in the very near term. However, with credit extension to households still very weak, there is limited reason to think inflation pressure could take hold longer term. This, coupled with weak growth prospects, could decrease the pressure on the central bank to hike rates more aggressively in the new year.

Forex: Cedi weakness helps drive inflation to a more than a four year high in November

Headline inflation in Ghana accelerated further in November, coming in at 12.2% y/y from 11.0% y/y in October. The inflation print surpassed consensus expectations of 11.2% and was the fastest pace of price growth since August 2017. On a month-to-month basis, prices climbed 1.4%. The higher inflation rate followed increases in housing, water, electricity, gas, food and transport costs. Food price inflation, which has been the main driver of inflation, quickened to 13.1% in November from a revised 11.5% in October, while non-food price growth accelerated to 11.6% from 11%, partly fueled by higher transports costs. 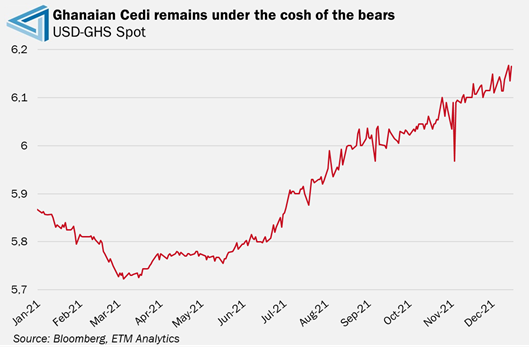 Continued weakness in the Ghanaian Cedi added topside inflationary pressures in November. For context, the Cedi lost around -0.90% and was the seventh-worst performing African currency against the USD. Last month, the Cedi recorded its sixth monthly loss out of the past seven as increased corporate demand for the dollar and the exit of the country’s bonds by some foreign investors weighed on the local unit.  Pulling back the lens, it is worth noting that the Cedi is down by -4.83% on a year-to-date basis.

While inflation exceeded the Bank of Ghana’s 6-10% inflation target for the third straight month, the reading is unlikely to persuade policymakers to raise interest rates next month as it waits to see whether November’s 100bps rate hike arrests inflation. That said, a rate hike can’t be ruled out. It is worth pointing out that risks to the inflation outlook in the coming months include new taxes such as a levy on mobile-money transactions announced in the 2022 budget and a weaker Cedi, which has pushed up import costs.

It is impossible to talk about fixed-income markets this morning without mentioning the FOMC decision that took place last night, given just how sensitive bond markets are to the developments in the monetary policy space at the moment. As expected, the Fed also announced that it would double the pace of the tapering of its asset purchase programme to $30bn a month. The vote on this was unanimous, while members signalled that they favour potentially raising rates next year at a faster pace than initially expected.

The Federal Reserve’s hawkish pivot overnight saw the US Treasury curve flatten as traders priced in three 25bps hikes for 2022, a marked shift from the previous meeting and one of the most aggressive hawkish shifts seen in recent years. The abrupt change is a result of “inflation developments and the further improvement in the labour market” with the FOMC dropping any references to inflation being transitory. There was, however, the proviso added that the pace of purchases could be adjusted if warranted by changes in the economic outlook.

According to Bloomberg data, overnight index swaps corresponding to meeting dates of the FOMC meetings shifted higher, with the level on the contract corresponding to the December 2022 meeting at one stage reaching more than 83bps, 75bps higher than the effective federal funds rate of 8bps, before slipping slightly to around 82bps. Meanwhile, the 10v2 US Treasury yield spread remained anchored near its lowest level recorded this year at 79bps. 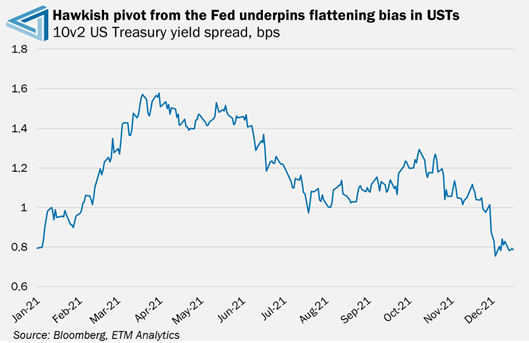 The flattening bias in the US Treasury curve reflects the hawkish shift in the outlook for US monetary policy, which has driven yields on the front-end of the curve significantly higher. For context, the 2yr US Treasury yield has risen by 55bps since the start of the year to sit at 0.67% at the time of writing. While longer-dated US Treasury yields rose sharply at the start of the year, they have oscillated in a sideways pattern in recent months as downside risks to the medium to long term economic outlook remain entrenched.

Nigeria was in the spotlight on Wednesday after the upper chamber of parliament approved President Muhammadu Buhari's request for $5.8bn in borrowing from international lenders. Recall that the request was approved by the lower house on Tuesday. According to reports, the borrowed funds from the likes of the World Bank, China Export and Import Bank, German Consortium and Islamic Development Bank are set to be used for power projects, water and sanitation, malaria eradication programmes and agriculture projects.

The borrowing forms part of the 2021 budget to deal with the devastating impact of the COVID-19 pandemic and drop in oil revenues, which have significantly impacted the country’s spending plans. While Nigeria remains in a relatively healthy fiscal position relative to its peers when looking at outright debt to GDP, it is worth noting that it has racked up a sizeable amount of debt to fund infrastructure projects and provide a boost to the fragile economy.

The Debt Management Office said earlier this week that Nigeria's total public debt rose to $92.75bn as of September, marking an 18% increase from a year earlier. Going forward, we expect Nigeria’s debt trajectory to remain tilted to the upside with the Buhari administration recently submitting a NGN 16.39bn budget for 2022 to lawmakers for approval. That said, we still don’t see any material risk of the country slipping into a position of fiscal distress in the short to medium term despite expectations for a sustained fiscal slide in the years ahead.