5 May 2022
Published by
ETM Analytics

Shortly after the FOMC decision, the USD capitulated and started what could turn out to be a deeper correction. Investors judged the Fed's actions to limit inflation as more constructive than adopting a more cautious approach and have rewarded the Fed with a powerful response. Overall risk appetite levels have improved, and the Dow surged more than 930 points on the news. The relief rally in stock markets helped risk assets more broadly, and some EM currencies responded well. Both the EUR and GBP have staged a modest recovery against the USD, and these moves could also extend further. There was a lot priced into the USD before the meeting, and so there is now a need to price in the possibility that the Fed may not be able to act quite as hawkishly as it has signalled it would.

Africa: The continent's biggest drugmaker Aspen Pharmacare requires solid commitments within weeks from African governments for its orders of the coronavirus vaccine, or it will recommit that production line to more in-demand anaesthetics. According to the head of strategic trade, Stavros Nicolaou, Aspen has been let down by the lack of interest in the shots, and with many countries having more shots than they have administered, it may not be economically viable to carry on with production. The situation could be a blow to Africa's plans to catch up with more developed countries' vaccination rates and preparedness for the possibility of future pandemics.

Ethiopia: In a boost for Africa's biggest coffee producer, exporters shipped 210k tons of coffee, earning $894mn in the nine months through April 8 after a policy adjustment to allow direct sales. This compares with exports of 153k tons in the same period a year earlier which earned $503mn. According to the Ethiopia Coffee and Tea Authority Director Adugna Debela, the revenue is about 69% of the full-year target of $1.3bn, while tonnage is on track to surpass the 300k ton goal for shipments. Debela added that "Over 1,500 farmers obtained export licenses, and during the reporting period, 50 to 60 of them exported their coffee directly," bypassing the auction in Addis Ababa.

Madagascar: Yesterday, Madagascar's central bank became the latest bank to hike its policy rate in order to quell inflation. Specifically, the Monetary Policy raised the marginal lending rate to 8% from 7.2%, citing rising price pressures. The MPC also added that the hike was also aimed at curbing interest-rate volatility in the short-term and maintaining potential for economic growth. The inflation outlook was meanwhile raised to 8% at the end of this year from an estimate of 6.4% previously due to a surge in cereals and oil prices.

South Africa: The USD has capitulated for now, and the ZAR has taken advantage. It has begun a correction which will likely extend further before a fresh base is found. Even then, with so much priced into the USD, the risk is of a deeper correction than many anticipate, despite the Fed's hawkish guidance. Although it will not happen all at once, a retreat back to 15.11 now looks possible. A break below that allows for a move back below 15.00.

Zimbabwe: Data from the Reserve Bank of Zimbabwe showed that remittance inflows in Q1 rose by 27% y/y to $629.6mn. The amount included diaspora remittances of $388mn, a 29% increase from a year earlier and, according to the central bank, was a result of increased use of formal banking channels due to the coronavirus pandemic. Meanwhile, remittances received through the formal banking system on behalf of international organisations amounted to $241.6mn, a 25% increase from a year earlier. Note that behind mineral exports, remittances are Zimbabwe's second-biggest source of foreign exchange.

Gold: The gold market rallied hard overnight with the trend to the topside continuing this morning in the Asian session. The Fed was less hawkish than many had hoped at its May meeting, the bank did hike by 50 bpts its largest in 22 years, but Fed Chairman Jerome Powell took any talk of a 75 bpt increase in any of the upcoming meetings off the table. This was all that was needed to take the shine off the dollar and pressure US Treasury yields, both of which supported the bullish gold narrative. With the Fed now behind us, we now have the opportunity to focus on developments in Ukraine-Russia conflict. This geopolitical bid is embedded for now and we expect it to underpin much of the price action going forward in terms of precious metal.

Currency markets in Africa are plagued by a number of structural and systematic challenges. Issues such as currency illiquidity and excessive levels of volatility have for decades had a significant impact on economies, trade, and the ease of doing business. Unsurprisingly, digital currencies and cryptocurrencies have increasingly been seen as offering a real-world solution to some of the key currency challenges on the continent. Cryptocurrency use on the continent has grown faster than anywhere in the world, with Chainanalysis, a blockchain data platform reporting that transaction volumes grew by 1200% between July 2020 and 2021. The rapid adoption has also been attributed to the young population that views virtual currencies as a safer counterbalance to their over-inflated fiat currencies. 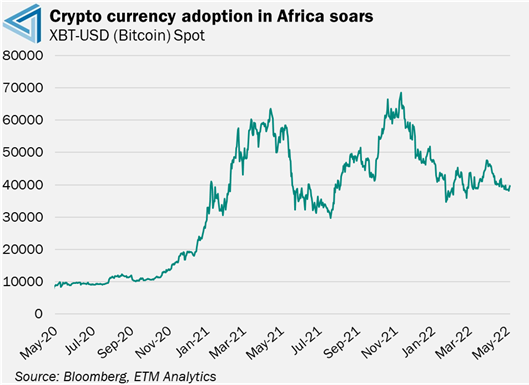 The reaction to the adoption of cryptocurrencies by central banks across the continent has varied. Nigeria adopted an interventionist approach with President Buhari last year, outright barring banks from facilitating payments for cryptocurrency exchanges and joining around 23 other African countries that have either implicit or total bans on trading. That said, anecdotal evidence shows that Nigeria has continued to experience a notable rise in crypto use through P2P platforms. Note that P2P platforms are non-custodial and let customers trade cash for cryptocurrency amongst themselves. Meanwhile, the central bank of Kenya has taken a more hands-off approach as the Governor has not aggressively tried to halt its use. The Central African Republic recently became the second country after El Salvador to declare bitcoin as legal tender. The International Monetary Fund has, however, warned that the adoption of Bitcoin as legal tender in CAR “raises major legal, transparency and economic policy challenges.”

Kenya’s East African peer Uganda yesterday became the latest country to warn the public against the use of cryptocurrency. The bank of Uganda cited a lack of regulations and the risky nature of the services. The central bank also directed all licensed enterprises not to engage in any cryptocurrency transactions in the country, warning that any found in breach of the directive would lose their licence to trade.

The global currency market is undoubtedly transforming with the rapid expansion of cryptocurrencies, digital currencies and blockchain technology, causing a stir around the globe. Given this is likely to be no passing phase, we could potentially start to see central bank regulators looking at ways of facilitating stable markets rather than outright bans in the medium-term.

Fixed Income: Bearish bias across global bond market to persist over the near term after Fed delivers 50bps hike

The market focus for fixed income traders is centred on monetary policy at the moment as major central banks tighten policy aggressively to curb soaring inflation. Overnight, the Fed hiked rates by 50bp as expected, its steepest hike since 2000. It also announced that it would start its balance sheet run-off from the first of June at a pace of $47.5bn a month. This is made up of $30bn of Treasuries and $17.5bn of mortgage-backed securities. The reductions for US Treasuries will then be increased to $60bn a month after the first three months, while MBS reductions will rise to $35bn a month. 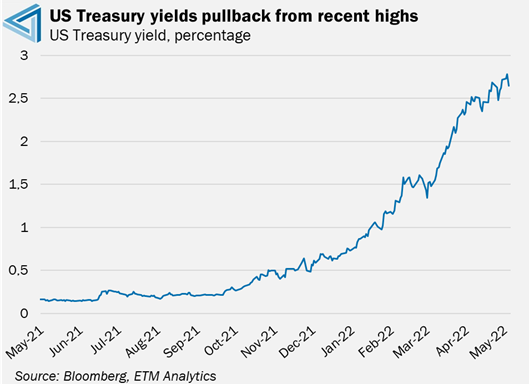 It should be noted that there were no dissenting voices this time around, with all voting members backing a 50bp rate hike. There was some speculation that we could have seen at least one vote for a 75bp increase. The initial market reaction saw the USD decline while stocks rose and bonds gained. However, Powell’s press conference generated some volatility in the markets before risk sentiment ultimately received a boost as he suggested that there would be no 75bp rate hikes.

Overall, it seems as if the Fed will remain hawkish for a while longer, but the market may be starting to realise that it got ahead of itself in pricing in such aggressive rate hikes. While we could see some repricing of rate hike risk in the sessions ahead, the Fed was decisively hawkish in its forward guidance, suggesting that headwinds for emerging market bonds will remain acute in the near term. While we expect central banks across the globe to tighten policy further in the months ahead, the current hiking cycle is likely to be shorter than previous cycles amid mounting growth risks. Therefore, given how much rate hike risk is currently priced into bonds at the moment, we see value in going long bonds over the next 12-24 months.

Ethiopian assets are back in the firing line of market bears as foreign currency reserves in the country continue to fall against the backdrop of increasing gross external financing needs, delays to expected sources of external financing, tightening lending conditions and increasing risk aversion amongst international investors weigh.

Ethiopia’s widening trade deficit is weighing on the country’s reserves as the central bank continues to manage the depreciation of the Birr. Expectations are that Ethiopia’s import cover ratio could fall to as low as one month. S&P Global forecast that Ethiopia’s foreign exchange reserves sat at $1.8bn in January. The factors mentioned above compound the risk of default. 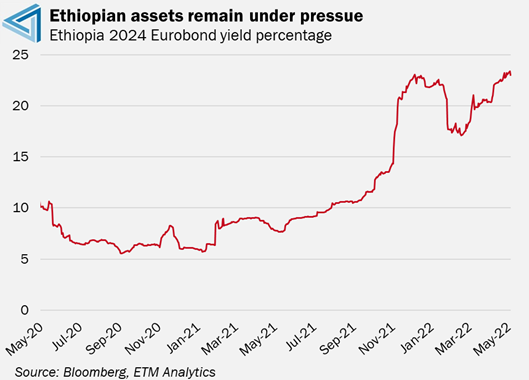 Ethiopia has had to contend with increasingly large external financing in recent years. However, the covid pandemic and war in Tigray have amplified the country’s fiscal issues, pushing the country towards a fiscal cliff. While Ethiopia has met its external financing needs in the 2021 fiscal year and is expected to prioritise its $33mn coupon payment due in June, the country will struggle to meet its debt obligations in the months ahead.

The sharp increase in fiscal risks and global risk-off conditions have come as a second headwind for Ethiopian assets in recessions. Since its lows in February, Ethiopia’s 2024 Eurobond yield has risen by more than 500bps to trade above the 23% mark. Meanwhile, the Ethiopian Birr has lost more than 4.5% against the USD as the depreciation in the local currency persists. Looking ahead, while some calm has been restored in Ethiopia, the outlook for Ethiopian assets remains decisively bearish over the short to medium term.