There is a lot priced into the USD, and this was again evident yesterday when the Fed announced its 50bp rate hike, and the USD did not appreciate. Despite Fed Chairman Powell sticking to a hawkish tone, indicating that the Fed funds rate would rise above 5% and adding that the fight against inflation must continue, investors doubted the sincerity of the comments. The smaller rate hike simply confirmed that the Fed was turning more sensitive to growth and may be nearing the end of the tightening cycle. Investors appear to be less concerned about whether the Fed will peak at 5.00% or 5.25% and more concerned about the turn in the cycle and inflation, which surprised to the downside.

Democratic Republic of Congo & Zambia: The US has signed a memorandum of understanding with the Democratic Republic of Congo and Zambia to explore ways to support their plan to develop an electric value chain together. According to US Secretary of State Antony Blinken, the plan “opens the door for the US and like-minded investment to keep more value added in Africa.” The DRC and Zambia are producers of copper and cobalt, key metals in electric vehicles and batteries. Earlier this year, they created an electric-vehicle battery council to explore the production of batteries in the region. Congo is responsible for about two-thirds of world cobalt production, while Zambia is the world’s sixth-largest copper producer and second-biggest cobalt producer in Africa.

Kenya: Fitch Ratings downgraded Kenya’s long-term foreign-currency issuer default rating to ‘B’ from ‘B+’. The outlook is stable. According to ratings agency, the downgrade reflects Kenya’s persistent twin fiscal and external deficits, relatively high debt and deteriorating external liquidity, and high external financing costs, which presently constrain access to international capital markets. Meanwhile, the stable outlook reflects some progress with fiscal consolidation, which is supported by a $2.3bn IMF program, manageable near-term debt commitments, and strong post-pandemic growth that is likely to continue over the medium term. Factors that could lead to a negative ratings action include increased balance of payment pressures or a sustained reduction in international reserves. Conversely, a reduction in external vulnerabilities that could come from a sustained narrowing of the current account deficit and implementation of a sustainable fiscal consolidation strategy could lead to positive rating action.

Kenya: The Kenyan government is set to use the Public-Private Partnership (PPP) model to complete the majority of KES 910bn ($7.41bn) worth of road projects yet to be constructed. According to local reports citing the Roads Transport and Public Works Cabinet Secretary, only KES 135bn of committed road projects across the country had been completed as contractors are worried over unpaid bills. The official added that the KES 70bn Nairobi Expressway is the only road project in the country to be tolled after being constructed under a PPP model and will act as a reference point in implementing remaining projects.

Nigeria: Speaking on Wednesday, Finance Minister Zainab Ahmed said that Nigeria has no plans to issue Eurobonds next year unless market conditions improve as bond yields are too high for African countries. According to the minister, the focus is on concessionary loans from the World Bank and others. Nigeria and many other African countries have struggled to issue Eurobonds this year due to tightening global financial conditions as major developed market central banks have hiked interest rates aggressively. As a result, alternative sources of financing have been sought.

Nigeria: Nigeria’s foreign exchange rate crisis continues to weigh on foreign investor participation in the stock market. For context, the October edition of the Nigerian Exchange report on domestic and foreign portfolio participation in equities trading showed that transactions by local investors surpassed those by foreign investors. The domestic investors pulled transactions of NGN 1.730trn, representing 83.19% in the first ten months of the year, while foreign investors transacted total equity worth NGN 349.59bn, representing 16.81% compared to 21.3% in the same period last year. Capital controls put in place by the central bank limiting currency repatriation and the disparity between the official and parallel market rates are some of the factors that have dented foreign investor appetite.

Namibia: In a statement published overnight, the IMF said that the Namibian economy is gradually recovering from the impact of the COVID-19 pandemic. After a sharp contraction in 2020, real GDP growth reached 2.7% in 2021 and the recovery strengthened in the first half of 2022. Mining activity has rebounded while manufacturing and tertiary sector activities are gradually recovering. Inflationary pressures have risen as higher international oil and food prices, due to the repercussions of Russia’s war in Ukraine, were passed through to the domestic economy. The IMF expects Namibia’s economy to expand by 3.0% in 2022 and 3.2% in 2023 with growth being by robust diamond, gold, and uranium production and a gradual recovery in tourism and manufacturing.

Forex: Cedi weakness drives inflation in Ghana to more than 50% in November

Headline inflation in Ghana accelerated further in November, coming in at 50.3% y/y from 40.4% y/y in October. The November print surpassed Bloomberg consensus expectations of a rise to 42.7% y/y and marked the 14th straight month that inflation has surpassed the 10% ceiling of the central bank’s target range as a slump in the value of the cedi raised the cost of imported goods like gasoline, driving up transport costs. 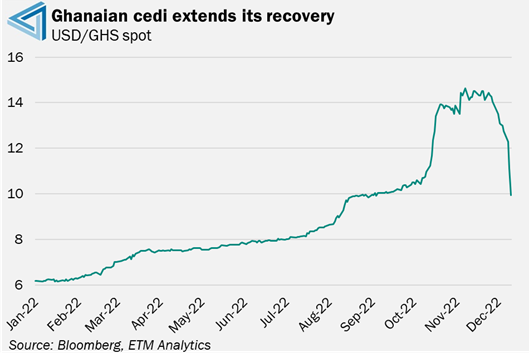 Imported inflation was 55.1%, and transport rose 63.1%. The cedi lost over 3% against the USD in November and was among one of the worst-performing African currencies during that period and remains on the back foot year-to-date. A further breakdown of the data showed that food price growth surged to 55.3% from 43.7% in October, and non-food inflation accelerated to 46.5% in November from 37.8% in the previous month. Overall, the stronger-than-expected inflation print could see the Bank of Ghana raise its policy rate further.

While cedi weakness has been a primary driver of inflation, it is worth noting that a turnaround in the cedi in recent sessions amid a preliminary $3bn IMF deal could ease price pressures in the coming months. As a result of the deal, which will help to restore macroeconomic stability, the cedi is on a world-beating rally on a month-date-basis, and there is room for further strength given that it remains significantly overvalued on a real effective exchange rate basis.

In line with expectations, the Fed scaled back its rapid pace of interest rate hikes last night, with the FOMC raising its benchmark rate by 50bps to a 4.25% and 4.50% target range. While the Fed downshifted on the rate at which it hiked rates, policymakers signalled that interest rates would rise more than expected as the bank looks to contain inflation expectations. The FOMC projects rates to end next year at 5.1% and 4.1% in 2024, which is higher than previous forecasts.

The FOMC said in its statement that “the committee anticipates that ongoing increases in the target range will be appropriate in order to attain a stance of monetary policy that is sufficiently restrictive to return to 2% over time.” While inflation appears to have peaked, policymakers still appear to be cautious over the outlook for inflation, given that the US economy remains exceptionally resilient. 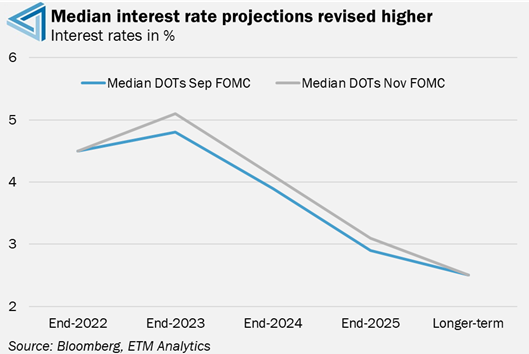 That said, Powell said that inflation expectations remain well anchored but noted that inflation risks are skewed to the upside. Powell reiterated that the Fed remains committed to returning inflation to its 2% goal, bolstering expectations that monetary policy will remain restrictive throughout next year. Powell added that while much of the tightening has already been done, the Fed still has some way to go on rates. Commenting on the bank’s dual mandate, Powell said that the Fed would do everything possible to meet its inflation target and achieve full employment.

In conclusion, while the smaller 50bps hike is a signal of a pivot in monetary policy, the upward revision to the median DOTs interest rate projections was hawkish. This was accompanied by a statement from Powell that the committee sees the need for more restrictive monetary policy in the months ahead before it can be confident that inflation will return to its target. All-in-all, the FOMC’s guidance was relatively hawkish. The jump in US Treasury yields underpins this notion as traders priced for another 75bps worth of rate hikes in 2023.

The latest African central bank to hike interest rates was the Bank of Mauritius, raising its key interest rate by 50bps to 4.50%. Arguably more interesting than the rate hike was the announcement of plans to introduce a flexible inflation target next year as part of efforts to make monetary policy more effective. With effect from January, the bank will use a so-called key rate equivalent to that charged on the seven-day bank of Mauritius bill instead of the 91-day bill. 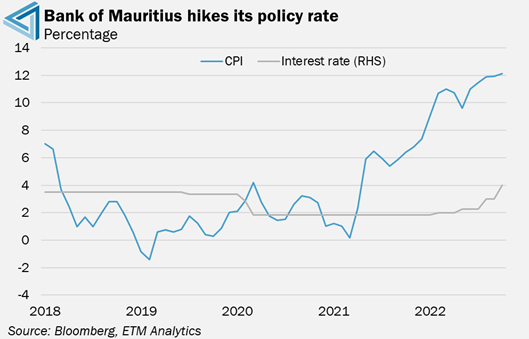 Inflation targeting is a framework used by central banks as a monetary policy tool to keep inflation in line with the given target. The inflation target will be set at a range of 2% to 5% to achieve 3% in the medium term. The hope is that this instrument will help improve the transmission mechanism of monetary policy signals and help anchor short-term money market rates.