Fed and Central Bank of Kenya to deliver rate verdicts

US Treasury and other core market bond yields dipped yesterday as the IMF flagged growing economic growth risks in its latest World Economic Outlook update. The fund downgraded growth forecasts for most countries, including big downward revisions for the US and China, cutting more than a percentage point off their prior forecasts for these two. US data releases also disappointed yesterday, supporting the economic slowdown narrative with New home sales at their lowest in two years and consumer confidence at its weakest in almost 18 months. The decline in yields was limited by the looming Fed meeting, with the swaps market still pricing in a full 75bp rate hike for tonight. The guidance offered tonight will, of course, be key in determining direction for the market going forward. We see a risk that the Fed could ease off its hiking cycle from September, slowing the pace of hikes into the end of the year. If something along these lines is announced, we could see a notable rally for USTs as well as other core bonds.

Meanwhile, in Europe, the BTP-Bund spread is widening and major institutions are flagging the risk that this spread could surge in the near term. Political and fiscal uncertainty in Italy remains high, and the market is still very unsure of the ECB’s new crisis management tool, which traders will be looking to test to see what the threshold is before the central bank will intervene.

Kenya: The Central Bank of Kenya (CBK) will be the latest African central bank to decide on its policy rate today. The CBK is likely to add to the 50bps rate hike implemented in May, the first in almost seven years amid buoyant price pressures, soaring bond yields, and currency weakness. Note that the inflation print in June exceeded the upper limit of the central bank’s 2.5-7.5% target range for the first time in five years and risks remain tilted to the upside. The CBK has been unable to use other tools such as open market operations and raising the bank’s reserves requirement to combat inflation given dollar scarcity.

Botswana: President Mokegweetsi Masisi has expressed confidence that a new diamond sales agreement between Botswana and De Beers Plc will be struck soon. Masisi added that the two parties were working out the “finer” details of the new pact after agreeing last month to extend negotiations on new terms to June 2023. Masisi further said, “it is imperative that a deal get struck because it is in the interests of both parties.” Botswana’s mines contribute about two-thirds of De Beers’ annual rough-diamond production, and the country now wants to leverage its control of the diamond reserves to wring more concessions from De Beers. According to Masisi, the government is seeking adjustments in the joint venture and more value added to the stones in Botswana through local processing to help boost job creation and economic growth.

East Africa: World Vision, the biggest food distributor for the United Nations’ World Food Program, is seeking to raise $2bn for 22mn people facing starvation in 25-high risk nations across the world. World Vision estimates that it requires $109mn to address the Horn of Africa’s worst drought in at least four decades and about $35.1mn of this amount would be utilized in Kenya. About 15 of the most affected nations are in Africa and include Ethiopia, Sudan, South Sudan, Kenya and Somalia. Aside from the danger of a major humanitarian crisis, it is worth noting that food shortages have contributed to inflationary pressures in the region.

Nigeria: Foreign participation in Nigeria’s stock market fell to 14.6% (NGN243bn) of the total NGN1.66trn transactions recorded in the first six months of the year. When annualized, it represents the lowest foreign investor participation on the exchange in 15 years. On a monthly basis, total foreign transactions decreased by 6.87% from NGN45.30bn ($108.02mn) to NGN42.19bn($100.15mn) between May 2022 and June 2022. The Nigerian naira’s volatility, coupled with the inability for companies to access foreign exchange, has dented foreign sentiment toward Nigerian assets.

South Africa: South Africa is considering issuing its first Samurai bond in more than two decades as the war in Ukraine and rising rates bring pressure to bear on rising borrowing costs. Speaking in an interview, the director debt issuance at the National Treasury Bomela-Msomi, said the volatility being experienced in the market was forcing South Africa to look at alternatives. According to Msomi, “if we look at some of the Samurai funds, for example, it does tend to look a little bit cheaper than what we would achieve in terms of our typical European issuance.” Other instruments being looked at include a new-inflation-linked bond, green debt, a domestic Sukuk and GDP-linked securities.

Oil: Oil prices are steady this morning after a relatively volatile session yesterday, which saw Brent crude prices reach $107.50 per barrel before retreating back down to levels near $104.40, where we are currently trading. A decline in crude stockpiles in the US and the ongoing energy crisis in Europe were not enough to support the market amid a stronger dollar on the session and some bleak economic growth forecasts from the IMF, impacting the demand outlook.

According to a recent brief from the United Nations Conference on Trade and Development, the cryptocurrency ecosystem expanded by 2300% between September 2019 and June 2021, with its use gaining more traction in developing countries. The study found that 15 out of the top 20 economies with the highest level of digital currency ownership were emerging market and developing economies. Interestingly, Kenya, South Africa and Nigeria led the adoption rate on the African continent in 2021. Kenya had the highest ownership on the African continent at 8.5% and was ranked fifth globally. Meanwhile, ownership in South Africa and Nigeria sits at around 7.1% and 6.3%, respectively. 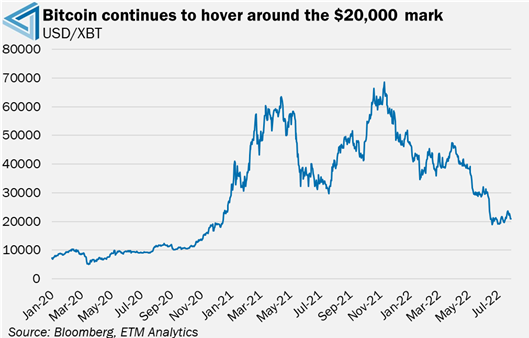 Digital assets continue to gain popularity on the continent despite mixed responses from policymakers. At one extreme, the governments of El Salvador and the Central African Republic have adopted bitcoin as legal tender, with the latter being the first African country to do so. Meanwhile, African countries such as Nigeria, Ghana, and South Africa have recognized the need for state representation in the form of central bank digital currencies. Nigeria already has the e-naira, while Ghana and South Africa are in the pilot phase.

Cryptocurrencies can help address challenges such as financial exclusion and weak currencies. However, they can be complex, very volatile, and are seen as potentially posing a threat to the use of monetary policy. Central bank digital currencies, however, appear to be more acceptable to policymakers. While there are also risks that need to be worked out there, this is the direction in which countries not only on the African continent but globally are shifting.

Fixed Income: The near-term outlook for African bonds rests in the hands of the FOMC

As highlighted in a recent report, price direction in African bonds has largely been driven by tightening global monetary conditions, particularly in the US. The study found that there has been an almost perfect positive correlation between African Eurobond yields and implied Fed fund rates, with the correlation between the two sitting at 0.97. With this knowledge, having insight into the path of monetary policy in the US is hugely beneficial. 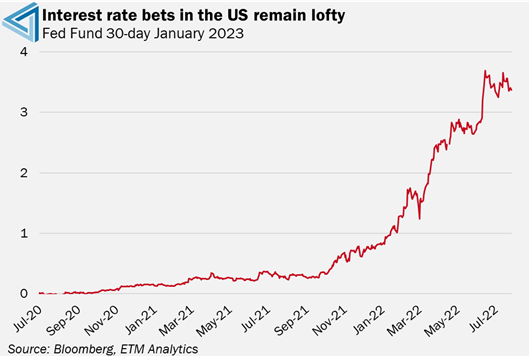 As of yesterday, the futures market was pricing in rates of around 3.40% by the end of the year, implying that interest rates in the US could still rise by more than 150bps by January next year. The market is positioned for another 75bps rate hike. While this aligns with the in-house view, the risk of a 50bps or an outsized 100bps rate hike can’t be ruled out. The big question is how does the Fed react to some weak economic data that has come out recently, which indicates that higher interest rates are starting to impact economic dynamism. The forward guidance provided, therefore, will be key.

Heading into tonight’s FOMC rate announcement, we expect the flattening bias seen over the past nine months to remain entrenched as traders continue to price for a heavily front-loaded tightening cycle in the US and the negative effects that it will have on growth down the line. As flagged in recent commentary, the flattening bias has been so acute that the US Treasury curve has inverted, indicating that the US is staring down the barrel of a recession.

With growth dynamics in focus, it is worth having a look at the International Monetary Fund’s latest World Economic Outlook (WEO) published on Tuesday. The global economic outlook has soured since the April WEO, with growth expected to slow from 6.1% in 2021 to 3.2% in 2022 and to 2.9% in 2023. The IMF noted that the downside risks highlighted in the April WEO are materializing. These risks include higher inflation worldwide, triggering a sharp tightening in global financial conditions, a sharper than expected slowdown in China and the adverse effects of the war in Ukraine on the global supply chain. 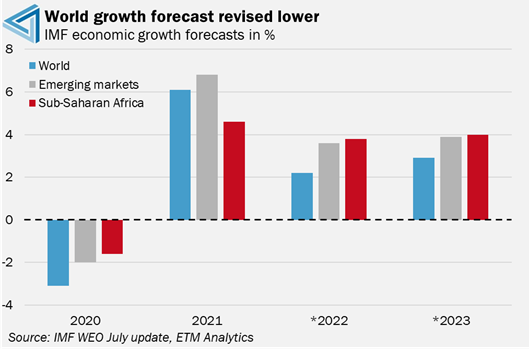 While the growth outlook for emerging markets was also revised lower, the negative revision primarily reflects the sharp slowdown of China’s economy and the moderation in India’s economic growth. Encouragingly, the IMF said that the outlooks for countries in the Middle East, Central Asia and sub-Saharan Africa remain unchanged or positive, reflecting the effects of elevated fossil fuel and metal prices for some commodity-exporting countries. Economic activity in sub-Saharan Africa is expected to expand by 3.8% in 2022 and 4.0% in 2023.

The international lender pointed out that higher food and energy prices, supply constraints in many sectors, and a rebalancing of demand back toward services have driven up headline inflation in most economies. The IMF also noted that underlying inflation has also increased, particularly in developed economies. With increasing prices continuing to squeeze living standards worldwide, taming inflation should be the first priority for policymakers, according to the IMF, adding that tighter monetary policy will inevitably have real economic costs, but the delay will only exacerbate them.