The Russia-Ukraine War is central to much of the the global outlook for commodity prices and geopolitical risk. However, the Europe-CIS region is no longer a key region for mainstream EM funds, with sanctions applied to Russia, a 3% EM index weight before its expulsion in 2022; the remaining region is less than 2%. 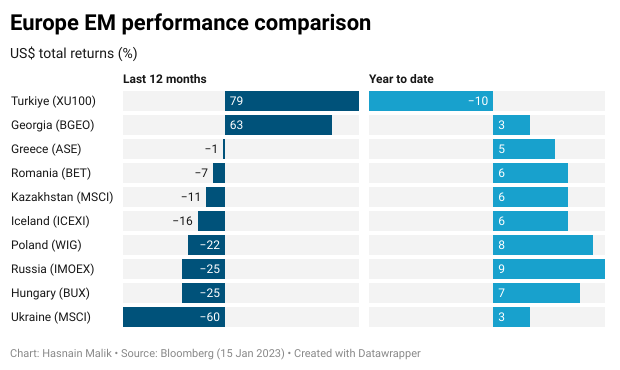 Europe-CIS does account for almost 30% of the MSCI FM index. In almost a mirror image of the GCC a decade ago, the region is very important for global asset pricing but not very important as an investment outside a small group of dedicated 'frontier' specialists. 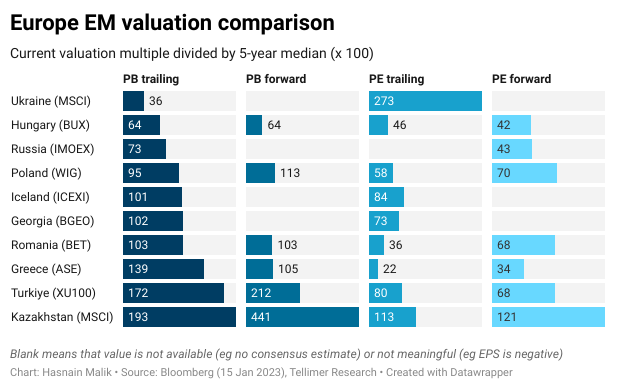 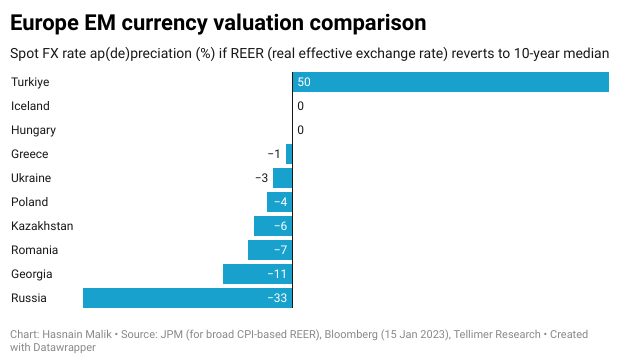 Below, we reiterate the views on individual countries first published in our twin outlook reports for the year on global Large EM and Small EM and FM.

With Russia subject to sanctions, Europe has lost its sole member of the Large EM group – ie markets with over a 3% weight (Russia was 3.4% shortly before the invasion of Ukraine).

The next largest European market in EM is Poland, with merely 0.7% weight. At their respective peaks since 2009, Poland and Turkey had weights merely as high as 1.5%.

In aggregate, Europe-CIS currently has below a 2% weight in MSCI EM. Even more than LatAm or South Africa, the region has become trivial for mainstream EM funds. 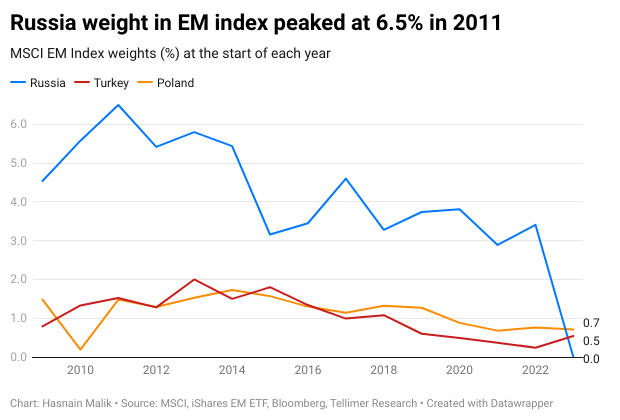 With forecasts of EU growth already downgraded in 2022, US dollar weakness relative to the euro in 2023 may be driven by expectations that US policy rates peak before those in the EU.

The possible de-escalation, at best, or freezing, at worst, of the Russia-Ukraine War is the main potential positive catalyst for the region this year. The cues from Ukraine’s territorial gains, China’s public rebuke of Putin’s nuclear threat and the US’s mild initial reaction to the missile explosion across the Polish border suggest these outcomes are more likely than a major escalation, eg a broadening of Russia’s attempted expansion to other countries or the use of nuclear weapons.

Hungary, with the highest share, among emerging EU peers, of primary energy supply from Russia, is the most exposed to Russia-Ukraine de-escalation or freeze and has a cheaper equity market relative to the historical average than others in Russia's periphery, like Georgia, Kazakhstan and Poland. It has already leveraged its effective veto on EU sanctions on Russia and on EU minimum tax rules to unlock access to EU Recovery Funds.

Iceland and other tourist markets

Croatia, Georgia, Greece and Iceland are driven as much by the generic factors mentioned above as they are by tourism, with around a 10% direct contribution to GDP for each one. The post-Covid revival that started last year should continue. Croatia and Iceland are significantly cheaper relative to their historical averages, with a potential commodity tailwind (aluminium) for the latter.

President Tokayev has already overseen the removal from positions of political and economic power of former President Nazarbayev and his patronage network, following the catalyst of mass protests in January 2022, and the institutionalisation of some of these changes, via a referendum on the constitution in June 2022.

These are changes that have reduced the risks of dictatorship and kleptocracy. But they have not yet established a path to competitive democracy, profound reform of state-owned enterprises or, at least, Saudi-style reinvestment of sovereign wealth (ie privatisation and the use of the proceeds to diversify the local economy away from raw commodities) – follow-through on previously announced reform plans would make the investment case becomes very appealing.

Risks remain that, if he is unchallenged politically, then Tokayev might use his authority to craft his own patronage network and push for constitutional change that enables him to continue beyond the single term limit, which expires in 2029, or that the vested interests tied to Nazarbayev revive and seek to reassert themselves.

The rightist PIS-led government's ability to test the limits of EU tolerance for deficiencies in independence of the judiciary, media freedom and human rights is weakened by the tougher external environment related to the Russia-Ukraine War, lower global growth and higher global cost of funding.

On the other hand, similar to Hungary, Poland is emboldened by the EU's desire to maintain unity on both the sanctions regime on Russia and the financial, military and logistics support to Ukraine.

However, Poland may not settle on any compromise with the EU in advance of its November 2023 election. Currently, the PIS government coalition has a slim majority in the lower house (51%, of which PIS is 42%) and a minority in the upper house (47%, of which PIS is 38%). The parliamentary opposition is significantly more fragmented than the governing coalition.

Turkey is still driven mainly by esoteric risks related to the unorthodox interest rate policy and re-election bid of President Erdogan. For local investors, the equity market remains an inflation hedge but, for foreign investors, continued friction in currency conversion and inevitable further currency depreciation should keep Turkey off the radar.

The general election in June is likely to act as a catalyst for a reversion to orthodox economic policy in the event that an opposition candidate wins. Erdogan’s own popularity among swing voters has declined but his political base outside Istanbul remains loyal and his use of authoritarian tools to undermine the opposition, as well as persistent divisions within the opposition, suggests the chances of an opposition win are slim.

Our EM Country Index ranks the investment case of 50 emerging and frontier markets and the US, as a developed comparable.

We weight c30 factors on growth, policy credibility, politics, sanctions, ESG, equity valuation and liquidity. The weights are adjustable; eg equity market liquidity (where the US and China outsize all others) can be cut to a zero weight.

A single country, sector, region, or theme is unlikely to lead global equities against a backdrop of uncertainty over a number of factors such as the:

Therefore, our overall approach to emerging markets equities is to favour active strategy over passive index-tracking, and to look for relatively cheap exposure to a number of themes:

Beyond the largest seven countries, which make up over 80% of the MSCI EM equity index, there is a very long tail in emerging markets. 17 countries make up the rump of the MSCI EM index, a further 21 'frontiers' make up the MSCI FM index and 13 countries are not classified in either index.

This description is not likely to change anytime soon and should make for very diverse performance within the group: bad for passive index trackers, or those with the ambition to take their fund's assets under management to great heights, but great for activist investors – at least those with funds large enough to matter (and survive the occasional redemption) and small enough to remain nimble.

For more on this overall emerging market equity strategy view, please see this previously published report and for the latest full country index.