Following on from comments through the course of the week on Beijing looking to temper commodity price volatility, we have word this morning that China’s banking regulator has asked banks to stop selling commodity linked futures to retail investors. The regulator has also asked that the banks completely unwind these books for these products. Reuters reported the following -The China Banking and Insurance Regulatory Commission's (CBIRC's) order to exit these products has not been reported before. It issued the order this year, two of the sources said. "The risk contained in banks' commodity-linked investments cannot be easily spotted by ordinary investors, neither can they bear it," one of the sources said. "Banks also don't have enough expertise to run such products properly." Moving on to trading this morning we have copper on the back foot in Asian trade with a stronger USD driving short term trading action. Underpinning the red metal is the supply threats poised by strike action in Chile as the BHP group experiences walk outs at its Escondida and Spence mines.

Relations between the US and China are tense and are unlikely to ease any time soon. US Trade representative Katherine Tai made it clear that the US still faces many challenges concerning China across the board. Beyond the list of human rights abuses, it's handling of Hong Kong and now Taiwan, its trade practices and growing influence on the global scale, President Biden is now requesting a deeper investigation into the origins of Covid-19. Information has resurfaced suggesting it may have leaked from the lab in Wuhan, which would've been man-made.

Egypt: Following a plunge in the tourism sector last year amid the adverse impact of the coronavirus pandemic, the Egyptian government is expecting a rebound in the sector this year. Tourism and Antiquities Minister Khaled El-Enany said on Wednesday that the country is targeting between $6bn to $9bn in tourism revenue in 2021 as an influx of Eastern European and Gulf vacationers revive the tourism sector. While tourism revenue is projected to rebound this year, it is expected to remain below pre-COVID 19 levels against the backdrop of the uncertain outlook of the pandemic and the delay in the removal of restrictions.

Zimbabwe: The Zimbabwean government moves forward with maintaining tight control over the mining industry and pushing for effective use of the country’s resources. The government took back 80 mining concessions allocated to firms under the “use it or lose it” policy. According to Mines Minister Winston Chitando, owners of the mining titles had been hanging onto mining concessions for speculations at the country's expense. The concessions that the government repossessed will be reallocated to investors that are ready to put them into production.

Angola: Data from International Energy Agency and Energy Intelligence Group showed that Angola’s crude oil exports are expected to tumble to their lowest level in more than a decade. For context, Angola is expected to produce a little over 991k barrels/day as ageing wells and years of low investment for exploration weigh on production. Recall that investment in the country’s oil sector dropped significantly following the plunge in global crude oil prices in 2014 and have not rebounded meaningfully since. Despite the improvement in global commodity prices this year, the continued drop in oil production will have a detrimental impact on the government, which relies heavily on oil earnings for more than half of their revenue. Despite this, the sharp rise in international oil prices has helped prompt a recovery in Angolan Eurobonds.

Nigeria: Bloomberg’s high-frequency data dashboard for Nigeria covering up to May 23 revealed that new virus infections are largely contained for now. The precautionary travel restrictions that remain in place are assisting in containing new infections. Recall that Nigeria has managed to inoculate over 1.5mn people since the start of its vaccination program in March and is targeting to vaccinate 40% of its population this year. Whether or not these targets will be achieved remains to be seen given the vaccine shortages facing many African countries. From an economic perspective, the containment restrictions that remain in place will continue to dampen the economic recovery.

Egypt: Egypt stands to receive the third tranche of the $5.2bn loan programme following the completion of the Stand-by Agreement (SBA) programme by the International Monetary Fund (IMF). The Egyptian government is expected to receive an additional $1.6bn in the coming weeks if the IMF Executive Board approves the agreement. The team leader for the IMF, Celine Allard, noted that Egypt’s authorities’ strong performance and commitment helped achieve the program’s objective of maintaining macroeconomic stability during the pandemic over the past year while protecting necessary social and health spending and implementing key structural reforms. It is worth highlighting that the expected foreign currency inflow from the IMF will bolster liquidity in the Egyptian economy and thereby offer support to local assets.

South Africa: South African local equities continue to outperform the bond market against the backdrop of broad-based dollar weakness, improved global risk appetite and global economic recovery prospects amid the intensification of vaccinations. Looking at normalised returns, the FTSE JSE ALSI has returned over 19% on a YTD basis, while the ALBI has only realised gains of just more than 10% for the year so far. However, it is worth pointing out that domestic bonds have been fairly resilient so far this year compared to losses seen during the same period last year. Local bonds continue to be weighed down by the country’s poor fiscal dynamics and structural challenges lingering in the undercurrent, while equities have benefitted from improved global risk appetite and a reopening of the economy. Looking ahead, the bond market still holds the potential to add to its gains, given the weak growth environment.

Those wishing to trade in Africa FX spot markets should note that we are in the month-end period when corporate commitments and tax payments often fall due. This causes a surge of liquidity requirements and often skews the price action in a particular direction, and is far more acute in the less liquid markets where a large payment can move the spot market aggressively in either direction. Thus some price action seen this week may well be out of kilter with the broader macro narrative.

As the month-end flows taper next week, the markets will once again start to focus on internal and external macro fundamentals. Those currencies with positive trade dynamics,  strong yield attractiveness and sound fiscal structures will remain resilient. At the same time, those with less than stellar economic scorecards will be relegated to the bottom of the table in terms of performance.

Internationally, the USD’s weakness is still a function of the massive monetary stimulus being injected into the system. One point to note is that the Fed may start looking at tapering in due course. Federal Reserve Vice Chairman for Supervision Randal Quarles stated yesterday that it is essential for the Fed to discuss tapering in the coming months as the US emerges from the economic doldrums caused by COVID-19.

Eurobond yields in African oil-producing countries such as Angola, Ghana and Nigeria remain relatively anchored despite growing fiscal concerns and mounting inflation fears. Helping to keep Eurobond yields in Angola, Ghana and Nigeria anchored is elevated oil prices, which for all three countries contributes to a notable portion of their tax revenue. 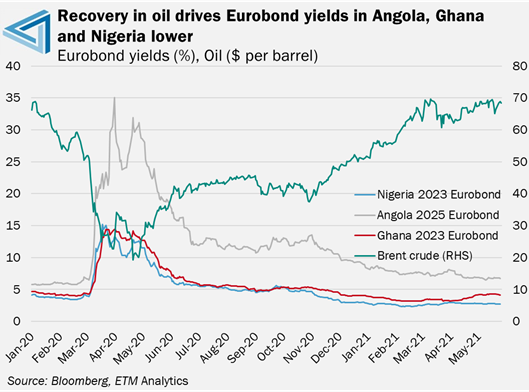 The marked recovery in oil since its collapse in April 2020 has instilled a bullish bias in African oil-producing Eurobonds. For context, Angola’s 2025 Eurobond yield has plunged 2828bps since its peaks in early 2020 to sit at 6.76% currently. Ghana and Nigeria’s 2023 Eurobond yields meanwhile have fallen by 1008bps and 1246bps since their respective peaks in 2020 to sit at 4.10% and 2.71%, levels seen prior to the COVID-19 outbreak. Though the recovery in oil was a significant factor driving Eurobond yields lower in Angola, Ghana and Nigeria, it must be noted that the significant shift in monetary policy last year in response to the pandemic and improvement in global risk appetite in recent months have also contributed to the decline in Eurobond yields.

Looking ahead, while oil markets are offered this morning, with the front-month Brent and WTI contracts edging lower as investors continue to assess the possibility of returning Iranian supply, oil prices are expected to remain elevated in the foreseeable future as economic activity and travel pick up. For now though, investors remain focused on Iran and are trying to work out how much supply can be added if a nuclear deal is reached. Iran’s infrastructure means that not all of its full capacity can come online immediately, while European buyers may take a cautious approach to buying the country’s crude at first. Nevertheless, increased supply levels are coming, and this may cause a rethink of OPEC’s plan to increase production levels through June and July gradually. Policy decisions from OPEC will be of utmost importance for fixed income investors in Angola, Ghana and Nigeria, given the impact of oil price oscillations on their respective bonds.

Macroeconomic: Central Bank of Kenya maintains its accommodative policy stance to provide support for the economy

Following in the footsteps of other African central banks, the Central Bank of Kenya (CBK) voted in favour of leaving its benchmark interest rate on hold at 7.00% on Wednesday. However, unlike Nigeria which is facing above-target inflation, it can easily be argued that the CBK has scope to maintain an accommodative policy stance given that inflation remains relatively contained. 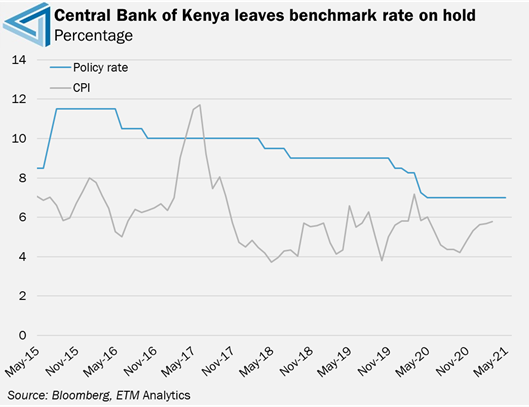 The CBK noted in its policy statement that the decision to keep rates on hold was to provide support for the economy with economic activity still being stifled by the ongoing COVID-19 pandemic. That said, the central bank noted that the virus containment measures implemented from March only had a moderate impact on output, adding that it expects a strong rebound as restrictions ease and more people are vaccinated. Even so, policymakers still see the economy as operating below potential.

The central bank highlighted in its statement that inflation remains well anchored. The CBK said that the inflation rate is expected to remain within the target range in the near term, supported by lower food prices and muted demand pressures, despite the recent increase in fuel prices.

While fiscal risks have deteriorated markedly as a result of the pandemic, the Kenyan shilling has managed to appreciate against the dollar this week. The combination of a rebound in remittance inflows, a rise in agriculture prices, and prudent monetary policy has helped support the modest recovery in the currency this year. Moreover, an improvement in global risk sentiment and a weaker dollar have added to the tailwinds for the shilling this year. The CBK also noted that Kenya’s foreign exchange reserves, which currently stand at $7.45bn, equal to 4.55 months of import cover, continue to provide adequate cover and a buffer against short-term shocks in the foreign exchange market.