Expectations of rising inflation the world over have come roaring back since the start of 2021, with the global economy adjusting to its new normal with massive levels of both monetary and fiscal stimulus set to support a strong economic rebound. This increase in expectations for faster inflation sparked one of the worst periods for bond markets since the introduction of the Volcker rule in 2014. Benchmark US bond yields soared from lows of just over 0.5% to highs of near 1.7% in just a few months, taking breakeven rates in the US to 2013 highs.  Expectations of massive stimulus by the Biden administration boosted yields on the assumption that the US economy could outperform many of its G10 peers through its 2021 recovery. Although neither the European nor Japanese economies will post a strong recovery, rising commodity prices and other supply-side pressures have meant that inflation expectations within these regions have risen, albeit slightly. 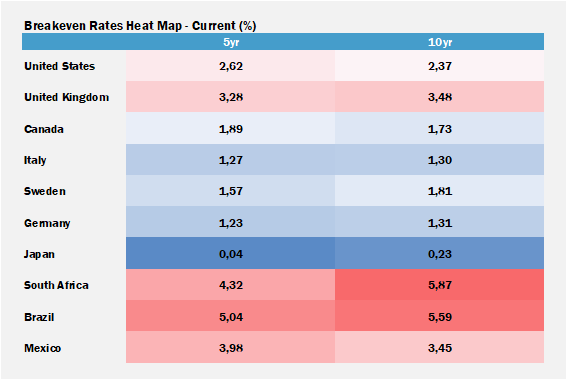 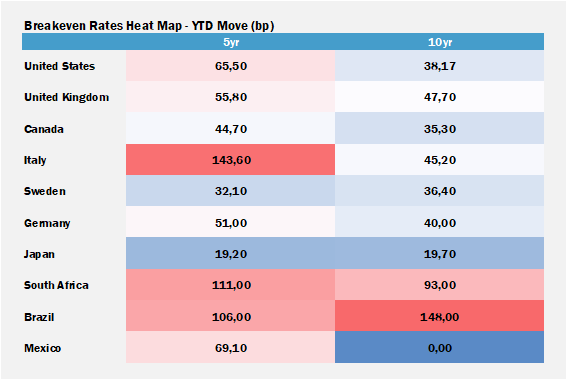 Following the COVID outbreak, countries around the world resorted to implementing fiscal and monetary support measures to try and limit the damage that the lockdowns imposed on their respective economies. While these measures were necessary at the time, they are not without consequence. Now that many countries are reopening, the flush liquidity conditions and looser regulations mean that inflation pressures have room to explode.

The US recently announced another $2trn stimulus package on top of the previous packages made by the Trump administration. These massive cash injections into the economy, coupled with drawdowns of accumulated savings and sizeable wealth effects from the strengthening property market, placed the US economy on track to grow at its fastest pace since the 1981/82 recession. During the recovery from the early 1980s recession, inflation levels remained relatively contained due to persistent slack in the labour market. However, the current recovery will be different as expectations are that the labour market's slack could be absorbed a lot quicker this time around. This consensus view has supported the rise in inflation expectations, especially as the Fed committed itself to let the economy run hot and exceed the central bank's 2% inflation target for an extended time.

In Europe, the massive EU stimulus programme is still on hold, with several nations still needed to vote to ratify the agreement. Despite this delay, the market still expects the funds to find their way into the economy and drive an economic recovery through the latter half of the year. With this package still in play, it is not surprising to see that inflation expectations within the common region have risen steadily in recent weeks.

With strong levels of economic growth comes greater demand for commodities. Oil prices have rallied sharply since their lows of 2020 on the back of an anticipated rise in demand, while base metals such as copper have reached multi-year highs and are forecasted to head even higher through the rest of the year. This "super-cycle" means that prices should remain above-trend due to a structural shift in demand, which some compare to the China-led boom of the 2000s or the period of global growth following World War II. Higher input prices, naturally mean that costs are going to rise given the pent-up demand. From the graph to the right, we see how this recovery in commodity prices has helped drive inflation expectations higher.

The latest US infrastructure investment stimulus package means that America will require vast amounts of steel, cement, and tarmac for roads and bridges, and cobalt, lithium, and rare earth metals for batteries. Most importantly, it will need a lot of copper to reduce its emissions and make progress towards its green goals. The problem with this is that China beat the US with regard to stockpiling copper, leaving the US to deal with scarcer supply and thus higher prices.

However, one thing to take note of is the weight of gold and oil in the Bloomberg Commodity Index, which we have used above. Together the two make up over 20% of the index, meaning that any significant moves in these markets could drive up the index. Both of these commodities are supply-constrained, with oil constrained by the OPEC+ output cuts. Once this supply constraint eases, it is questionable whether demand levels will keep prices at their current levels. 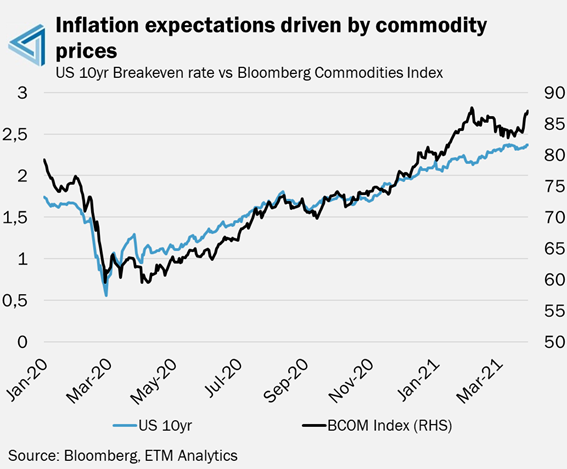 The recent rise in inflation expectations does not only pertain to developed markets. On average, emerging market breakeven rates rose to their highest levels since the height of the pandemic and the highest since 2018 before that. Expectations of higher inflation were driven by currency weakness alongside the rise in commodity prices. MSCI's Emerging-Market Currency Index dropped by as much as 1.44% this year with the likes of the BRL depreciating by more than 7% against the USD. As mentioned above, commodity prices have soared due to the anticipated increased demand in the coming months, and food prices have skyrocketed. The Food and Agriculture Organization's food price index, which measures monthly changes for a basket of cereals, oilseeds, dairy products, meat and sugar, averaged 118.5 points last month versus 116.1 in February. This was the 10th straight monthly increase, and the effects of this will filter through into the broader inflation outlook.

Another factor to consider for emerging markets is the deterioration of fiscal stability following the pandemic. Debt-to-GDP ratios for most emerging markets have blown out over the last year, while interest rates have plunged to record lows in some cases. This cocktail provides room for inflationary pressures from the factors mentioned above to take hold if authorities do not prudently taper their stimulus measures as their economies start to show signs of a recovery. 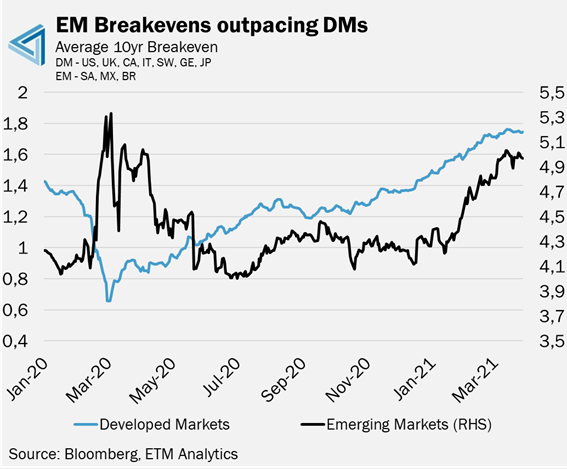 Bottom Line: The market has started to price in rising inflationary pressures through the coming months amid a cocktail of loose monetary and fiscal policy, higher commodity prices, and returning demand following the pandemic. These expectations may seem to be overdone for developed markets as although demand is recovering, we have yet to see the more permanent impact of economic scarring that the pandemic has had.  For emerging markets, their structural deficiencies and widening account imbalances suggest that an inflation blow-out may be looming, as evidenced by the recent increase in breakeven rates.