Oil is edging higher this morning following yesterday’s losses, with the front-month Brent contract currently just below the $66 per barrel mark, while WTI trades just north of $62. The gains come ahead of tomorrow’s OPEC+ ministerial meeting, although we have had an OPEC technical committee release new forecasts, which have seen their demand growth estimates revised higher. The committee has forecast that oil consumption will rebound by 6mn barrels a day this year from last, while most of the supply glut built up during the pandemic will be cleared by this quarter. This supports the cartel and its allies raising production levels gradually from next month onwards without pressuring prices too significantly.

The factor to watch at the moment, however, remains India and its massive surge in new COVID cases, which is hampering fuel consumption. Indian Oil Corp., the country’s biggest refiner, is looking to sell gasoline into the spot market while other processors are postponing planned maintenance at some plants. Until this wave of infections passes, oil prices will remain capped.

On the currency front, ahead of the FOMC decision and statement tomorrow, it is unlikely that the market will adopt any significant position. That said, the USD has recovered off its lows and is treading water at the moment as investors wait for a fresh catalyst. The overwhelming bias remains firmly set against the USD for now as expectations of an ultra-loose Fed as well as the large twin deficits raise the risk of further USD depreciation. Technically, the market looks set to remain range bound through another session, with the data scheduled for release unlikely to alter market sentiment much.

Egypt: Egypt hopes to soon end the dispute over compensation regarding the Ever Given container vessel that blocked the Suez Canal last month. The Suez Canal Authority is claiming $916mn in damages from the Ever Given owner after it blocked the waterway for six days. The insurer and owner of Ever Given are questioning the calculation of the compensation. As a result, the owner has filed an appeal at the Ismailia court, which will be heard on May 4.

Ghana: In a bid to boost local supplies and speed up the vaccination program, drug makers in Ghana have approached AstraZeneca Plc about acquiring the rights to manufacture the UK company’s vaccine locally. Aside from the delays in vaccine supplies due to the side effects, African countries are lagging in receiving vaccines as wealthier countries focus on vaccinating their own populations first. The vaccine supply inequality has the potential to delay economic recoveries on the continent. Ghana’s plan will likely be seen as a positive move and welcomed by markets. Executive secretary of the Pharmaceutical Manufacturing Association of Ghana, Lucia Addae was quoted saying that “We need government’s commitment to purchase and guaranteed market for the vaccines because they cannot be sold on the open market or over the counter.”

Uganda: Uganda’s Finance Ministry stated that it is considering approaching its major creditors, including China and the World Bank, to negotiate a possible debt suspension of loan repayments amid a growing default risk. The country’s debt load surged to $18bn as of December last year, a 35% increase from the previous year fuelled by the large credit lines to cover revenue shortfalls as anti-crisis measures taken to combat the COVID-19 virus hit the economy and stifled tax collections. Finance Minister Matia Kasaija said that Uganda’s debt load is expected to rise above 50% of GDP by the end of the current financial year in June.

Zambia: It would seem that the global investment community is hopeful of an improvement in the broader fiscal outlook for Zambia which is demonstrated in the yield on the 2027 Eurobond bond. Zambia’s Eurobond is yielding some 19.62%, which is a whisker higher than the year to date low of 19.60% level recorded in early March. An upgrade by Fitch and the IMF, seeing the potential for a deal before the August elections, will keep frontier market investors interested, given the opportunity for a significant return. These investors have expressed further comfort in the outlook for Zambia given the current trajectory of the copper price, which is Zambia's largest earner of hard currency.

Botswana: Debswana is confident on the outlook for diamonds as it confirms that it will be investing some $6bn to construct the world’s largest underground mine at Jwaneng. The new mine will involve some 360km of tunnel and full capacity is expected to be reached by 2034, according to Debswana Diamond transformation and innovation head Thabo Balopi. The annual production capacity is expected to be as much as 9mn carats and this new section should extend the life span of Jwaneng by some 20 years.

The latest CFTC data has shown that speculators turned more bullish on the South African rand (ZAR) during the week ending 20 April. Both gross short and long contract numbers increased during the week, but the latter outpaced the former, which saw the net position rise to a net long $0.13bn from $0.09bn the week prior. This is the most bullish that the market has been on the ZAR since early March and explains some of the appreciation seen for the currency in the spot market at the start of last week.

Given how the dollar has performed over the last few sessions of last week and the start of this week, it wouldn’t be surprising to see a further build of net long bets on the ZAR in the next few rounds of CFTC data. The short squeeze on the USD looks to have ended, and this means speculators will rotate back into the likes of the ZAR and other currencies.

On balance, speculators are building on the net long ZAR bets, helping the currency appreciate in the spot market. This may continue for the near term, given the outlook for the USD.

The combination of a recovering currency and signs that the government is looking to rein its fiscal budget in the wake of the COVID-19 pandemic has seen foreign investors rotate back into Ghanaian local currency debt. The proportion of sovereign debt held by foreign investors increased for a third consecutive month in March, climbing to 22.4%. This compares to foreign holdings of local currency Ghanaian debt, which stood at 20.3% at the end of last year, the lowest since the Central Securities Depository started tracking the data.

While it is encouraging to see that foreign investors are beginning to pour funds back into Ghana, it is worth noting that foreigners held 28.2% of all outstanding local currency debt before the outbreak of the coronavirus in Ghana. 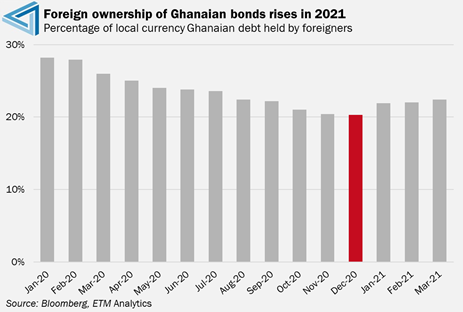 That said, given the commitment from the government to narrow its budget deficit and return to a position of prudent fiscal policy, we expect the proportion of foreign holdings of Ghanaian debt to rise in the months ahead, especially as global risk appetite improves.

Ghana’s Finance Ministry aims to reduce its budget deficit to 9.5% of GDP this year, from more than a decade high of 11.7% in 2020. Ghana’s budget deficit swelled last year as the COVID-19 pandemic stifled revenue intake and drove up emerging spending to fight the devastating effects of the pandemic both from a humanitarian and economic perspective.

Finance Minister Ken Ofori-Atta said that Ghana plans to use part of the Eurobond proceeds from its $3bn Eurobond issuance last month to buy back local currency debt bearing an average interest rate of 19%, adding that it will save the West African country at least $200mn in debt servicing costs over the next 4 years. Its actions such as this that investors are finding encouraging.

Mozambique was dealt a massive blow on Monday after Total declared a force majeure on its $20bn liquified natural gas project in Mozambique. The French oil giant announced that it had withdrawn all of its staff from the construction site following the devastating insurgent attacks last month. The insurgency, which started in 2017, has up until this year not threatened Mozambique’s prospects of becoming a major force in the global LNG space, where the East African nation has the potential to compete with the likes of Australia, Qatar, Russia and the United States.

In an official statement, Total said, “fresh violence in the north of the Cabo Delgado province, leads the company to declare force majeure.” Declaring force majeure implies a lengthier suspension and allows Total to cancel contractors. Carlos Zacarias, chairman of the institute that governs Mozambique’s energy development, told a news conference that Total would not fulfil contractual obligations while the force majeure was in place. Zacarias added that Total had not abandoned the project.

The Total-led LNG project involves the development of the Golfinho and Atum natural gas fields in the Offshore Area 1 concession and the construction of a two-train liquefaction plant with a capacity of 13.12mn tonnes per year. The forced suspension will delay Total’s plan to start extracting and exporting LNG from its Area 1 operation by 2024 with some analysts stating that Mozambique may not be a major producer of LNG in the 2020s.

The force majeure also comes as a major setback for the country that expects the export of its LNG reserves to help transform the economy. Commenting on the attacks in Cabo Delgado, which is also home to one of the world’s largest ruby mines, Mozambique President Filipe Nyusi said that the government would work to restore peace. While the government has bolstered its forces in the region, we are of the view that a more robust approach is required before calm in the region is restored and the country’s prospects of becoming a major LNG player are reignited.