Ethiopia plans to restructure its debt under the G20's Common Framework – a new restructuring process for eligible countries with unsustainable debt that goes beyond debt service relief under DSSI – media reports said on Friday. The ministry of finance said “Ethiopia will look at all available debt treatment options under the G20 communique issued in November”, according to Reuters. However, it is not clear to us if the Common Framework is yet fully operational.

The reports took markets by surprise. Ethiopia’s sole dollar bond (ETHOPI 6.625% 2024) fell 6pts on the day to US$94.6 (mid price as of cob 29 January) with the yield rising 194bp to 8.3% (YTC mid price basis). It also came as a surprise to us. We had a Buy recommendation on the bonds, and they were one of our top picks for 2021, based in part on the country's positive reform outlook. Ethiopia is rated B2/B/B.

However, while investors are right to be concerned, excessive pessimism may not be warranted at this stage. It is not really clear to us what Ethiopia intends to do, with the finance ministry saying that it will only be able to inform other creditors on the “need for broader debt treatment discussions” after IMF-assisted talks with official creditors. The statement seems ambiguous and investors may prefer to wait for further clarification as to whether a full restructuring is intended or not, or whether the intention was for some sort of market-based refinancing operation. It might simply be a case of mis-communication or misunderstanding of what is possible under the Common Framework.

That said, Ethiopia has already availed itself of debt service relief on its official bilateral debt from Paris Club creditors under both the DSSI (9 June 2020) and Extended DSSI (24 December 2020), providing payments relief through to June 2021. Debt service savings on official bilateral debt under DSSI amount to US$473mn (about 0.5% of GDP) in 2020 (May-December) and US$360mn in 2021 (H1), according to World Bank data. A decision on a further extension of DSSI (probably through to year end) will be made in April, so until then, the Common Framework is the only other option available under the G20 communique. And the Common Framework should imply a restructuring.

First, what does it mean for Ethiopia?

Even though the country has taken advantage of DSSI, which suggests some liquidity pressure, it is not alone in doing so, but the suggestion that things are so bad as to require a comprehensive restructuring comes as a surprise. The bonds were after all trading at par prior to Friday with a yield below 6.5% (yields were well below 6% in early January), suggesting the market was comfortable with Ethiopia risk; the country had market access. And it was only a few weeks ago that the government paid the US$33mn coupon on the bond on 11 December. We wonder if there has been a misunderstanding, or if the country has been poorly advised, and if it could change its mind once it sees and understands the reaction.

The IMF staff report for the request for disbursement under the RFI in May 2020 noted public debt was sustainable although downside risks and liquidity pressures had increased. Public debt was projected at 56% of GDP in FY2020/21, and was seen as only a bit higher in the October WEO (58.5% in 2021), with a fiscal deficit of 3.1% of GDP. It might be that the macro situation has deteriorated markedly since then, especially given security concerns in Tigray and the border dispute with Sudan.

Investors may also ask whether the government has somehow been cajoled into this by parts of the official sector, with private sector involvement (PSI) the price of further official sector support, especially given the perceived lack of private sector participation under DSSI. However, restructuring the bonds would not buy much, and the costs may outweigh the benefits. The bonds are a relatively small part of the debt, and there is plenty of time before they need to be refinanced. Public external debt (PED) is around 55% of total public debt. The US$1bn bond is about 4% of PED while annual debt service on the bond (interest only until the 2024 bullet maturity) is US$66mn. There may however be other (more expensive and short term) commercial debt.

Second, it is not clear what the Common Framework actually means or how it would work.

The Common Framework is a new and so far untested process. Ethiopia is the second country to seek treatment under this approach following a recent request from Chad.

The Common Framework was first mooted in October, during the IMF/World Bank Annual meetings, with the need to bring together all bilateral creditors around the same principles and the same approach in a common framework for dealing with debt, in recognition of weaknesses in the existing architecture. The G20 Leaders' Summit in Riyadh in November set out some operational details. It noted the intention "to facilitate timely and orderly debt treatment for DSSI-eligible countries, with broad creditors’ participation including the private sector." The process will be initiated at the request of a debtor country and the need for debt treatment will be based on an IMF/WB DSA. The debtor country will be expected to seek comparability of treatment from private creditors.

In any case, the Common Framework shouldn’t change the existing architecture too much. We understand the Common Framework is merely a process for bringing non-traditional bilateral creditors (especially China but others too, for example in the Middle East) formally into a typical Paris Club restructuring, something we have welcomed and is long overdue. In theory, this shouldn't have any impact on what a commercial debt restructuring might look like or how it would proceed (compared to what would have happened anyway under the existing approach under the Paris Club principle of comparability of treatment); if anything it should make for a more comprehensive and sustainable restructuring although bringing together a more diverse creditor group could complicate and lengthen the process. However, despite years of experience and precedent in sovereign debt restructuring, bondholders will be concerned that the Common Framework will bring about a change in the rules of the game.

And because the Common Framework is specifically meant to address solvency concerns (intended for countries with unsustainable debt, requiring more than liquidity relief under DSSI) it is hard to see the Eurobonds being excluded from this process, given the explicit comparability of treatment requirement, unlike the voluntary nature of DSSI. That makes an independent and transparent assessment of debt sustainability even more important, although bondholders will be concerned that they will be kept outside this process.

Third, what does it mean for other SSA issuers, and DSSI eligible countries more generally?

If a “safe” country such as Ethiopia yielding less than 7% is seeking a restructuring, what does that mean for other safe countries, let alone those that were perceived as more risky? We expect the market will begin to price in another African issuer premium until there is more clarity on this, as we saw under DSSI initially (which we estimated could have been as high as 200bp).

This could of course mean that some countries which may have had market access could lose it. Côte d'Ivoire may be relieved it issued when it did. That said, excluding Zambia which is already in default, and besides Chad (which doesn't have any eurobonds), we don't think there are many obvious restructuring candidates in SSA that might follow Ethiopia's lead (although that in itself might be a worry as we didn't expect Ethiopia either), other than perhaps those with pre-existing concerns such as Angola and Republic of Congo. That said, Ethiopia is facing a fairly specific set of security risks that are not present in other SSA countries, which could limit the extent of contagion.

We downgrade our recommendation on Ethiopia's US$ bond to Hold from Buy pending further clarification of the government's intentions. 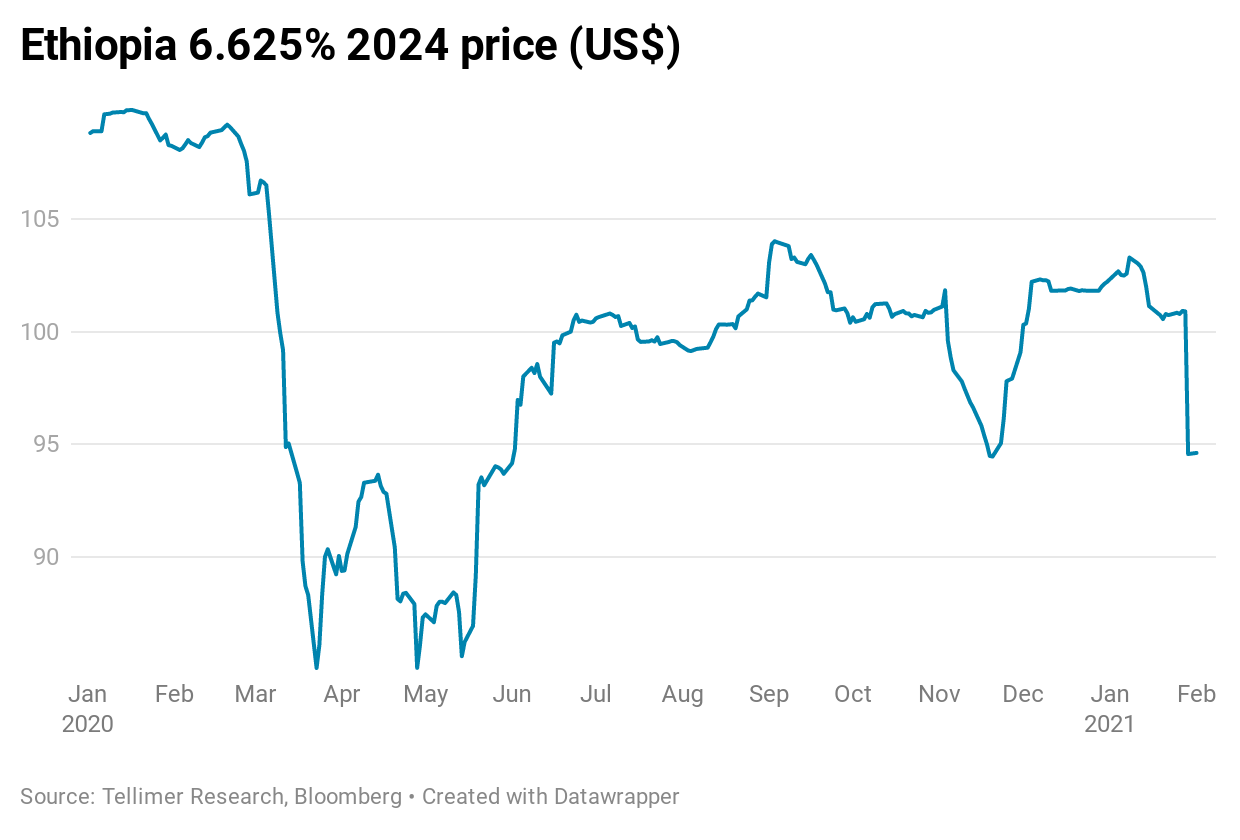