On 3 November, just two days shy of the two-year anniversary of the conflict breaking out (which happens to be today, 4 November), a ceasefire was announced between the Ethiopian government and Tigrayan leaders. The ceasefire comes on the back of African Union (AU)-mediated negotiations in Pretoria beginning last week.

According to a joint statement read in the presence of representatives of both sides, the warring parties have agreed to the following:

The government will also take control of the Tigrayan capital Mekelle and, in return, will ensure there is no "foreign incursion". This is interpreted to mean that troops from neighbouring Eritrea, which had been supporting the government’s efforts in Tigray and are widely understood to be responsible for numerous war crimes (alongside government and Tigrayan forces), would leave Tigray. The ban on the TPLF will also be lifted and it will once again be recognised as a political party.

The ceasefire is a welcome development after two years of devastation. While the total casualties of the war are not yet known, last month Belgium’s Ghent University estimated the death toll at 385,000-600,000 and UN Secretary-General António Guterres said that civilians are “paying a horrific price” due to the suspension of aid deliveries, “indiscriminate attacks” on residential areas and reports of “sexual violence and other acts of brutality”.

That said, Ethiopia is not out of the woods yet. This is the second ceasefire signed this year, with the “cessation of hostilities” in March proving ineffective (with fighting continuing and aid deliveries severely limited), and ultimately unravelling completely in August after the resumption of fighting. Indeed, former Nigeria President Olusegun Obasanjo, who led the AU mediations, emphasised that “This moment is not the end of this process, but the beginning of it. Implementation of the peace agreement signed today is critical to the success of the process".

Further, while both the government and TPLF were party to the negotiations and the agreement was praised by President Abiy Ahmed, national security adviser Redwan Hussien and TPLF spokesman Getachew Reda, representatives from Eritrea and Ethiopia’s Amhara region were noticeably absent. Both groups have longstanding grievances with the TPLF and there is a risk that, having been left out of the ceasefire negotiations, they will not fully respect the terms of the agreement (although this is not our base case).

Still, this week’s ceasefire, if it is respected and fully implemented, would be a major step in the right direction. The conflict, aside from untold human suffering, has also derailed Ethiopia’s once-promising reform agenda and prevented negotiations with the IMF on a new programme and official creditors on a debt restructuring under the Common Framework from moving forward, leaving Ethiopia’s economy in the lurch. Indeed, Abiy said in a statement that the agreement "is monumental in moving Ethiopia forward on the path of the reforms we embarked upon four and half years ago".

Ethiopia’s lone 2024 eurobond has responded positively to the news, rebounding by 3pts (6%) since Tuesday to just over US$54 as of cob yesterday. We think the rally is justified. That said, we remain cautious and think Ethiopia needs to establish a credible track record of ceasefire implementation to unlock further upside. Ethiopia also has a long road to complete its IMF and restructuring negotiations, with the resumption of direct budgetary support from donor countries as a prerequisite for both, and it is still unclear if Ethiopia will be able to avoid restructuring its eurobonds given the focus of official creditors on “comparability of treatment” and alarmingly low reserves (just US$1.6bn, or 1.15 months of imports). 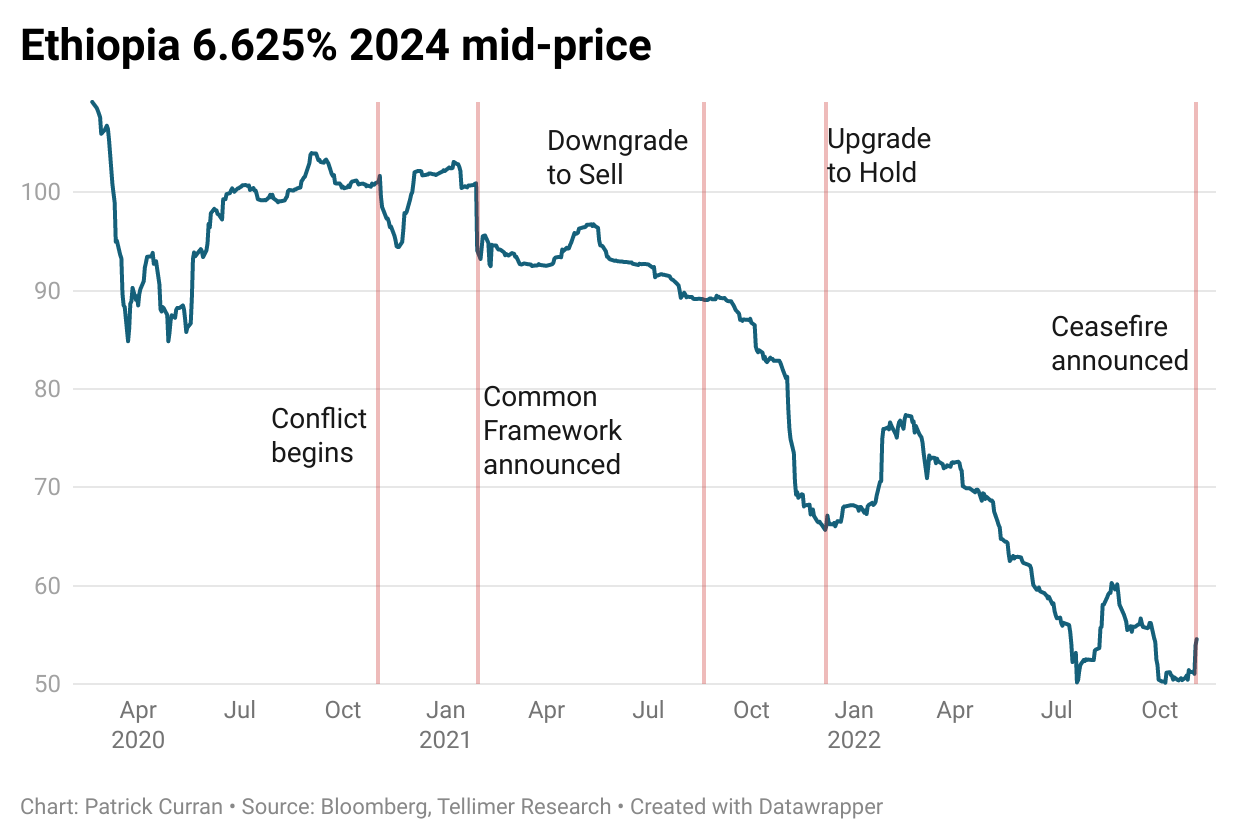 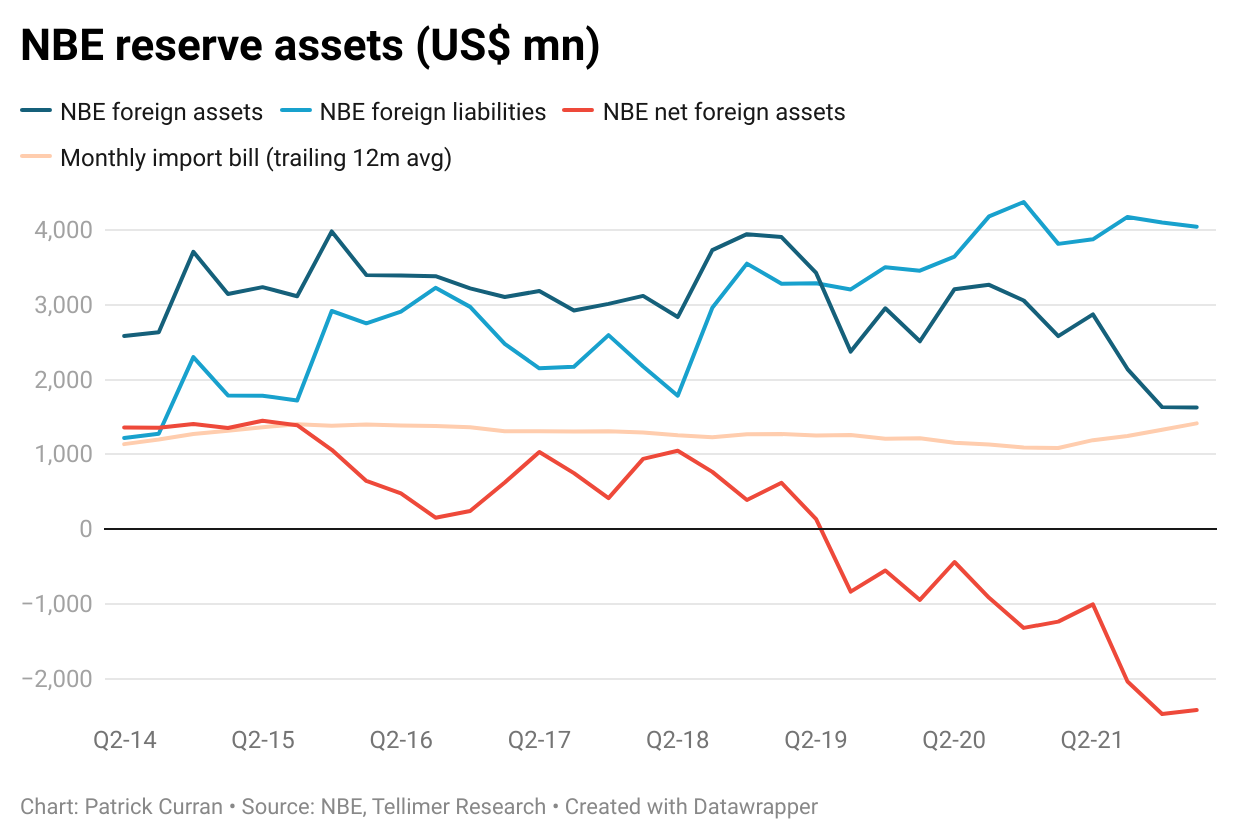 As such, we retain our Hold recommendation on the ETHOPI 6 ⅝ 12/11/2024s at US$54.1 (41.5% YTM) as of cob on 3 November on Bloomberg and wait to gauge how successfully the ceasefire will be implemented and for more clarity on what sort of reform and restructuring requirements the IMF and other official creditors will have to push negotiations over the line.

Note: See the Ethiopia country section in our recent summary of our takeaways from the IMF/WB Annual Meetings for a more thorough analysis of Ethiopia’s economy and IMF/restructuring talks.

Ethiopia: New forecasts are optimistic, but we stay cautious, May 2022