Given the dearth of domestic data, focus at the start of the week has been centred on the developments in China, given the potential impact it could have on regional markets and economies. Note that China is a major trade partner for the East African block of countries, and therefore, a collapse in Chinses demand could have a detrimental impact on regional trade and economic dynamics.

The concern at this stage is not for a Lehman-style meltdown but rather a slowdown in Chinese demand. China has also been reducing factory output and smelting activity to improve air quality ahead of the Winter Olympics next year and clamping down on key sectors that will add to the headwinds the economy faces. There has been a flight to safety across global markets at the start of this week as investors fretted about the spillover risk to the global economy. It is worth noting that Chinese demand risks are not isolated to just the property sector, with several high-frequency economic measures and government clampdowns in various other sectors raising concerns about the outlook for China. 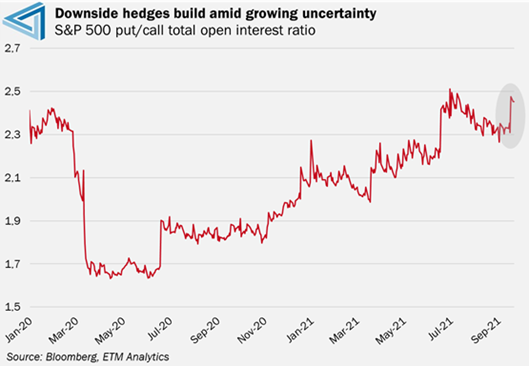 For now, we don't see any systemic risk for the global economy from the Evergrande situation. That said, there doesn't need to be any systemic risk in order for markets to be affected, given how fragile global financial markets are at the moment. Chinese authorities have the means and the will to avert a full-blown credit crisis. They will not be afraid of the potential moral hazard it creates, turning this potential disaster into a LTCM-like "Minsky" moment rather than a replication of what happened with Lehman Brothers in the US. The bigger picture, therefore, suggests that contagion from what ultimately happens at Evergrande will be contained. That said, this should be viewed as an opportunity to reassess the risks emanating from a possible slowdown in Chinese economic growth, which will have a notable impact across global asset classes and lead to an erosion of some of the resilience in regional FX.

Regionally, in a letter of intent to the IMF, the Tanzanian government has cut its growth forecast for 2021 and raised its budget deficit. The economy is now forecast to expand by 4% this year, down from a projection of 5.6% in June. Meanwhile, the country's fiscal debt is expected to widen to 3.9% of GDP in 2021/22, causing a fiscal financing fap of 0.8% of GDP versus an earlier estimate of 1.8% of GDP. Tanzania also noted that it plans to present to lawmakers "a supplementary budget in February 2022 after the mid-year review to properly account for all necessary spending." Tanzania also pledged to resume publishing pandemic data by the end of this month, having stopped in April 2020.

The Kenya National Bureau of Statistics data showed that black tea earnings declined to KES 77.2bn in the seven months through July, from KES 78.9bn a year earlier. Leaf output slipped 1.4% to 342,409 tons during the period, while coffee production dropped 9% to 25,574 tons and earnings fell 18% to KES 17.4bn. Income from horticulture decreased 7% to KES 87.6bn. Note that Kenya is the world's largest exporter of black tea, and thus a decline in export earnings would weigh on its foreign income.

Business owners in Kenya have expressed their dissatisfaction around surging electricity prices which they blame on a legacy of mismanagement at the state-owned power distributor and want its board to take urgent action. According to Kenya Private Sector Alliance (KEPSA), the cost of electricity has jumped more than 70% over the past ten years, raising firms' operating costs and erasing competitiveness. Kenya Power & Lighting Co., which distributes all the nation's electricity, has long been dogged by management upheaval, unsustainable levels of debt and rising costs that it's sought to pass on to consumers. Its prices could increase again next month due to a rise in fuel costs. KEPSA further called for a turnaround strategy that includes restructuring its debt, reducing energy losses and improving its service.

In a blow to President Kenyatta's administration to raise income that could have contributed towards narrowing the budget deficit, the High Court yesterday ruled that the government's plan to impose a minimum tax on corporate sales, even when a company reports losses, is unconstitutional. President Kenyatta's administration was looking to collect at least KES 21bn annually from the measure. It would be yet another income stream to go toward the plan to narrow the East African nation's fiscal deficit to 7.5% of GDP in the financial year through June.

While the market focus has been centred on China at the start of the week, all eyes will be on the US tomorrow. Undoubtedly, the most significant event this week for financial markets is the FOMC rate announcement. While the actual rate decision is a foregone conclusion, the policy statement and rhetoric used by policymakers hold the potential to result in some significant price action and will likely determine near term directionality for financial markets the world over. Traders will scrutinise the policy statement for indications of how soon the Fed will start to taper stimulus. Traders will also seek clarity on eventual interest rate hikes. Until the statement is out and traders have digested it, we expect markets to remain in limbo. A hawkish statement should provide a boost to the dollar and a headwind for EM FX. The opposite also holds true.

The stock market sell-off yesterday is starting to abate, with corrections taking place across Europe and the US. Commodity markets are also generally in the green while emerging market currencies are rebounding marginally. This doesn't mean that the risks are gone, however. There are still no signs of plans from Chinese authorities to bail out Evergrande, and investors are therefore positioning for the risk of a default and all the knock-on implications it might have on other companies and growth. Beyond this, investors will also be positioning for tomorrow's Fed announcements, which could provide the details on the timing of the tapering of its asset purchases in order to gradually withdraw stimulus.

While emerging market currencies are a sea of red at the start of the week on the back of the risk-off conditions, East African currencies are mixed. Leading the gains on the week is the Rwandan Franc, which at the time of writing had appreciated by 0.21% against the greenback. The losses so far this week are being led by the Ethiopian Birr, which has lost 0.44%. Pulling back the lens, once again, the ETB is leading the losses in September as the currency sell-off persists. Interestingly, the Kenyan Shilling is the second-worst performing East Africa currency this month. The KES depreciation has been attributable to a recovery in imports, a weaker than expected tourism rebound, and a persisting current account deficit. Falling reserves have also added downside pressure to the KES in recent weeks. 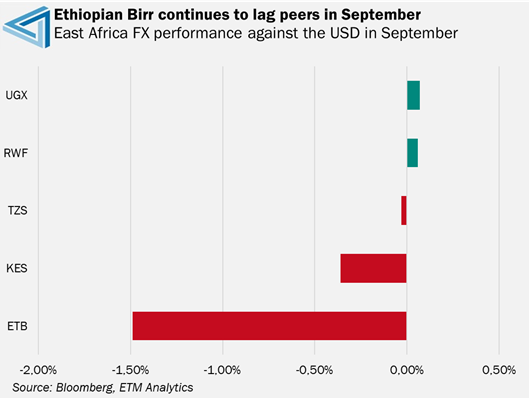 In the fixed income market, Ethiopia is in the spotlight after the US threatened to impose new sanctions on the country over the conflict in the Tigray region. Sanction fears have led to an acceleration in the sell-off in the country’s Eurobonds. Yields across the Ethiopian Eurobond curve surged have surged in recent days, with the 2024 yield, for instance, climbing more than 100bps this month, with most of the topside moves coming in recent days. At the time of writing, the 2024 Eurobond yield stood at 11.56%, levels not seen in more than 5 years. Note that since the violence in the northern part of the country erupted in November last year, the 2024 Eurobond yield has risen more than 500bps. 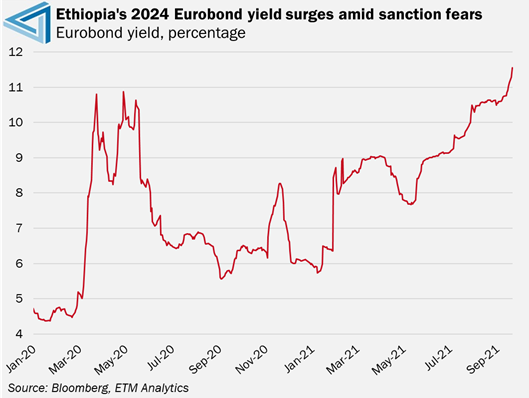 The sharp sell-off in Ethiopia’s 2024 Eurobond comes against the backdrop of a sustained depreciation in the Ethiopian Birr, which has lost more than 22% against the USD since November last year. The sell-off in domestic assets has also partly been driven by the government’s announcement at the start of this year that it is seeking to restructure its debt under the G20’s debt relief program to help further cushion the devastating impact of the COVID-19 pandemic.

Bloomberg reported that a meeting of creditors convened last Thursday to discuss the East African country’s debt restructuring. This is expected to lead to the formal creation of a committee of creditors to discuss the reorganization. Recall that in July, the International Monetary Fund called for the quick formation of a creditors’ committee as the international lender requires details on Ethiopia’s debt outlook to inform its own decisions providing funding to the country. Looking ahead, given the combination of headwinds facing Ethiopia at the moment, we expect the bearish bias in domestic assets to remain intact in the months ahead. That is unless we see some resolve in the Tigray region between the government and regional leaders. Until then, Ethiopian assets are seen underperforming their regional counterparts.