Oil markets have kicked off the new week on the back foot this morning, with both benchmarks declining as we near the European open. The decline follows Friday’s losses and comes amid some renewed dollar strength ahead of this week’s FOMC meeting. Tapering jitters are back in the market with expectations that the Fed will announce more details on the timing of its stimulus reduction on Wednesday. This could keep oil on the defensive up until the event, but it should be noted that even if tapering begins soon, the Fed will still be pumping massive amounts of stimulus into the economy that will continue to support asset classes such as oil. As such, oil prices should remain elevated over the coming months as inventories continue to draw down and global demand for energy continues to pick up, especially across Europe and Asia. With natural gas and other energy prices soaring, many will be looking to substitute these with oil and diesel, something that the oil market cannot absorb at the moment without prices rising

Ahead of the FOMC decision, the USD is on the front foot. However, the reasons may not be related to the Fed's taper timeline. On the contrary, it is related to some of the heavy losses sustained in Asian markets this morning. Rising expectations that China's Evergrande could lead to domino effects on other developers have spooked investors that have rotated away from stocks. Risk aversion has risen, and investors in riskier asset classes will lighten up on their exposure in favour of USD assets.

Botswana: There was some good news on Friday as the global ratings agency, Standard & Poors upgraded Botswana’s outlook to stable from negative, citing prospects of a stronger economic recovery as a reason for the adjustment. The agency stated that they believe a recovery in the diamond sector will underpin the rebound while other mining activities will play a role in lifting the general outlook.  The agency’s analysts stated that the country has "robust and predictable" institutional and monetary policy frameworks, modest net general government debt levels and relatively strong net external position, in justifying their review of the outlook.

Ethiopia: In a Bloomberg report quoting sources familiar with the matter, Ethiopia's major creditors have created a panel to revamp some of the nation's about $30bn worth of foreign debt. According to the sources, an announcement on the committee's formation will be made within days after the Ethiopian authorities and the creditors agree on pending terms. A debt overhaul committee marks a breakthrough in a global push to restructure the debt of poor countries struggling with the fallout from the coronavirus pandemic and follows a call by the IMF for creditors to convene after months of delay.

Kenya: Business owners have expressed their dissatisfaction around surging electricity prices which they blame on a legacy of mismanagement at the state-owned power distributor and want its board to take urgent action. According to business lobby group Kenya Private Sector Alliance (KEPSA), the cost of electricity has jumped more than 70% over the past ten years, raising firms' operating costs and erasing competitiveness. Kenya Power & Lighting Co., which distributes all the nation's electricity, has long been dogged by management upheaval, unsustainable levels of debt and rising costs that it's sought to pass on to consumers. Its prices could increase again next month due to a rise in fuel costs. KEPSA further called for a turnaround strategy that includes restructuring its debt, reducing energy losses and improving its service.

Tanzania: In a letter of intent to the IMF, the Tanzanian government has cut its growth forecast for 2021 and raised its budget deficit. The economy is now forecast to expand by 4% this year, down from a projection of 5.6% in June. Meanwhile, the country's fiscal debt is expected to widen to 3.9% of GDP in 2021/22, causing a fiscal financing fap of 0.8% of GDP versus an earlier estimate of 1.8% of GDP. Tanzania also noted that it plans to present to lawmakers "a supplementary budget in February 2022 after the mid-year review to properly account for all necessary spending." Tanzania also pledged to resume publishing pandemic data by the end of this month, having stopped in April 2020.

Nigeria: Speaking post the MPC meeting Central Bank Governor Godwin Emefiele said that the bank was investigating abokiFX, an online platform that tracks the value of the Naira in the unauthorized market. The Governor accused the platform of manipulating prices in the parallel market. Emefiele said that the platforms gets loans "to purchase dollars, take a position, change the rate over a given period, sell dollars they purchased and make a profit… This is completely illegal, it is unacceptable, and we will pursue them". The company responded to the allegations saying, "abokiFX does not trade in foreign exchange, neither do we manipulate rates in anyone's favour. All rates published are randomly sourced daily from various market locations in Lagos." The investigation by the CBN marks the latest move to control the slumping Naira.

ECOWAS: West Africa leaders on Friday called for Guinea's new military rulers to hold an election in six months following the September 5 coup. Chairman of ECOWAS and Ghanaian President Nana Addo Akufo-Addo said that a short transition remains the position of ECOWAS following a meeting with military leaders who ousted President Alpha Conde earlier this month.  Akufo-Addo said, "we had very frank and fraternal talks with Col. Doumbouya and his collaborators. I think that Ecowas and Guinea will find a way to walk together." Meanwhile, Junta leaders have vowed that President Conde will not be allowed to seek, exile saying they would not cave to mounting pressure from regional mediators who have imposed targeted sanctions after this month's coup. 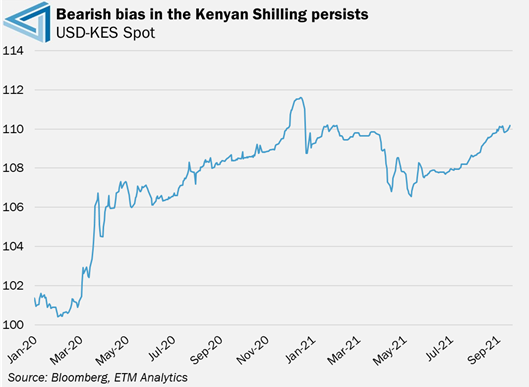 While remittance inflows have risen sharply when compared to levels seen last year, the monthly decline in July will concern KES bulls. This comes against the backdrop of increased demand for dollars from importers, which has also weighed on the local unit and saw it extend losses to a fifth straight session on Friday and record its biggest weekly loss since August 13. Pulling back the lens, the broader bearish bias remains entrenched. For context, the KES is down by -0.26% against the USD on a month-to-date basis and has recorded monthly losses since June. The weakening has been attributable to a recovery in imports, a weaker than expected tourism rebound, and a persisting current account deficit. Falling reserves have also added downside pressure to the KES in recent weeks.

Looking ahead to this week, the bearish bias in the KES is expected to persist as the currency is pressured by demand from importers, dividend payments, and purchases of assets abroad.

Fixed Income: Ethiopian Eurobond yields surge after US signals that it could implement sanctions

Ethiopia was in the spotlight on Friday after the US threatened to impose new sanctions on the country over the conflict in the Tigray region, which led to an acceleration in the sell-off in the country’s Eurobonds. Yields across the Ethiopian Eurobond curve surged on Friday with the 2024 yield for instance, climbing 11bps to a new high of 11.13%. Note that since the violence in the northern part of the country erupted in November last year, the 2024 Eurobond yield has risen by around 470bps. 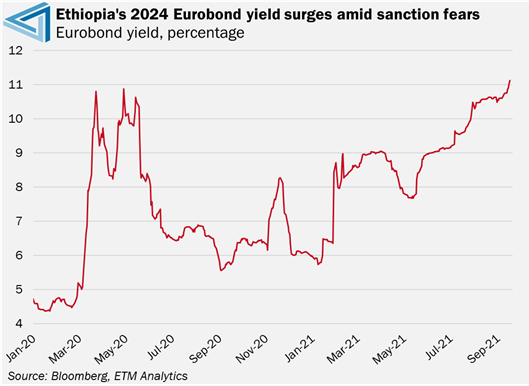 The sharp sell-off in Ethiopia’s 2024 Eurobond comes against the backdrop of a sustained depreciation in the Ethiopian Birr, which has lost more than 22% against the USD since November last year. The sell-off in domestic assets has also partly been driven by the government’s announcement at the start of this year that it is seeking to restructure its debt under the G20’s debt relief program to help further cushion the devastating impact of the COVID-19 pandemic.

Bloomberg reported that a meeting of creditors convened last  Thursday to discuss the East African country’s debt restructuring. This is expected to lead to the formal creation of a committee of creditors to discuss the reorganization. Recall that in July, the International Monetary Fund called for the quick formation of a creditors’ committee as the international lender requires details on Ethiopia’s debt outlook to inform its own decisions providing funding to the country.

Looking ahead, given the combination of headwinds facing Ethiopia at the moment, we expect the bearish bias in domestic assets to remain intact in the months ahead. That is unless we see some resolve in the Tigray region between the government and regional leaders. Until then, Ethiopian assets are seen underperforming their regional counterparts.

Macroeconomic: IMF approves another tranche of emergency support for Tanzania

Tanzania’s economy which has been hit hard by the COVID-19 pandemic, received another shot in the arm late last week after the International Monetary Fund announced that it had approved $567.25mn in emergency support to Tanzania to address the COVID-19 pandemic. The international lender said in a statement published on its website that the COVID-19 outbreak has led to the collapse of the tourism sector and amplified the need for significant financing to tackle the health and economic effects of the pandemic.

The funds were approved under emergency financial assistance under the Rapid Credit Facility and Rapid Financing Instrument to support the authorities’ efforts in responding to the pandemic by addressing the urgent health, humanitarian, and economic costs. The IMF noted that the funds will also play a critical role in the country’s efforts to mobilize additional support from development partners.

As part of the deal, the government has pledged to strengthen governance and transparency to ensure that the financial resources are efficiently spent on addressing the crisis. The lender noted that maintaining fiscal and debt sustainability, and preserving financial stability while supporting the economy, is important. Moreover, the IMF said that the banking system’s health in light of increased banking sector vulnerabilities will be key. Going forward, investors will watch closely to see if the government resumes its reform agenda once the pandemic abates. Failure to do so is expected to lead to a further sell-off in domestic assets.