Ethiopia: The forgotten war rages on

Optimism was running high towards the end of last year that a resolution to Ethiopia’s conflict was imminent. This prompted bonds to rally sharply, which we argued at the time seemed overblown given our own lack of optimism that the conflict would be resolved so quickly and easily.

And while bonds have since adjusted downwards following Putin’s invasion of Ukraine, they are still 4.25pts above the December low, seemingly reflecting greater optimism that a durable solution to the conflict can be reached relative to four months ago.

However, since December there has seemingly been little progress towards a durable ceasefire, with continued fighting and a deterioration of humanitarian conditions in the months since. But with all eyes now turned to the war in Ukraine, focus has shifted away from the war in Ethiopia. This has prompted both a lacklustre international response to ongoing atrocities in the region and, we think, an underappreciation of the severity of the conflict by many interested onlookers and market participants.

In this article we unpack recent developments and assess the implications for Ethiopia’s eurobonds and, more importantly, the prospects for lasting peace in the country.

Last December, the withdrawal of Tigrayan forces from Amhara and Afar and the announcement that government forces would not advance further into Tigray prompted optimism that an end to the conflict was near. This was bolstered by statements from Prime Minister Abiy Ahmed in a private meeting that ceasefire talks were imminent, by the establishment of an 11-member National Dialogue Commission and granting of amnesty to several high-level opposition figures, and the first delivery of medical supplies to Tigray by the Red Cross after a prolonged blockage of aid.

However, hopes for a ceasefire were quickly dashed at the end of January when the Tigray Defence Forces (TDF) announced a fresh offensive in neighbouring Afar, which it claimed was due to continued airstrikes and blockage of aid by forces loyal to the government. At the same time, accusations of atrocities committed by both sides have continued to mount, including damning reports by Human Rights Watch and Amnesty International accusing both sides of war crimes such as murder, torture, rape, sexual slavery, and ethnicity-based violence.

The conflict and associated aid blockages have led to a severe humanitarian crisis, with the World Food Programme estimating that three-quarters of Tigray’s population is "using extreme coping strategies to survive" and more than a third "are suffering an extreme lack of food." This has been exacerbated by the worst regional drought in 40 years, with more than 44mn people in need of humanitarian assistance across Ethiopia, Kenya, Somalia and South Sudan, and the situation is set to worsen towards the middle of the year if the ongoing March-May rainy season again delivers insufficient rainfall.

This prompted the government to declare an "indefinite humanitarian truce" on 24 March to help hasten the delivery of emergency aid into Tigray, with the Tigrayan forces agreeing to a "cessation of hostilities" if access to aid is eased. This paved the way for an international aid convoy to enter Tigray on 1 April, the first delivery in over three months.

However, the ceasefire has reportedly been violated multiple times, with a flare-up of fighting in Afar and regional authorities accusing Tigrayan forces of amassing on the border. At the same time, the government has launched a fresh offensive against the Oromo Liberation Army (OLA), a group that is allied to the TPLF.

Meanwhile, both sides have been accused of continuing to block the delivery of aid into Tigray, with very limited provision of aid since the ceasefire was announced. The World Health Organization (WHO) says that Tigray has "been under blockade by Ethiopian and Eritrean forces for almost 500 days” and that “there is nowhere on earth where the health of millions of people is more under threat.”

Despite the scattering of positive headlines in recent months, it is clear that very little progress has been made towards a durable peace. In the meantime, the humanitarian crisis continues to worsen. And while the West has (rightfully) ramped up its efforts to solve the ongoing crisis in Ukraine, there is seemingly little urgency to solve the crisis in Tigray.

The Senate Foreign Relations Committee recently approved a bill to create a framework for sanctions in Ethiopia and the US has revoked Ethiopia’s preferential trade status under the African Growth and Opportunity Act (AGOA), but otherwise, there has been little effort to solve the crisis or hold anyone accountable for the atrocities that have been committed.

Without a more concerted effort from domestic, regional, and international players to make peace, there is little to suggest that an end to the crisis is near, despite the occasional tide of hopeful headlines suggesting otherwise.

Against this backdrop, Ethiopia’s IMF programme and Common Framework debt restructuring process remain stuck in the mud. IMF Spokesman Gerry Rice said in a press briefing on 10 February that “with heightened uncertainty on the ground and its impact on the economy, it's difficult to move to programme discussions right now. But we stand ready to engage on programme discussions when the time is right.” Further, the crisis has prevented the publication of updated macro estimates by the IMF since last April.

Fitch Ratings voiced concern that the Common Framework process had stalled, saying that the delay could reflect disagreements among Ethiopia’s bilateral creditors, as well as the ongoing civil conflict. It is largely assumed that China has been the key obstacle to finalising the second stage of Ethiopia’s official sector restructuring, which is necessary to get the IMF programme back on track and initiate discussions with private creditors.

The ongoing crisis will also hinder the government’s plans to liberalise its banking sector and attract new investment into the telecom sector. Notably, the authorities have asked the IMF to exclude US$765mn of non-guaranteed external debt owed to China’s Huawei by Ethio Telecom from its Debt Sustainability Analysis (DSA), which would improve Ethiopia’s sustainability rating and lower the likelihood that private bondholders will need to be included in the restructuring to bring debt to sustainable levels.

While we still think the government is keen to exclude private bondholders from the restructuring (it has continued to service its US$1bn eurobond, with the next US$33mn coupon due on 11 June), and that there is a path to do so while maintaining IMF support, there is an increasing risk that private creditors will be dragged into the process if the conflict continues to weigh on Ethiopia’s economy and undermines its balance of payments (BOP) outlook, which could make debt unsustainable without a more holistic restructuring in the eyes of the IMF and official creditors.

The limited data we have at our disposal points to continued economic stress, with inflation staying elevated at 34% yoy in February, foreign reserves dropping from US$2.9bn to US$2.1bn in Q3 2021 (or from -US$1bn to -US$2bn in net terms), and the ETB trading at a c30% premium on the parallel market (despite depreciating by c20% over the past year). This suggests severe underlying BOP pressures, and could necessitate a more holistic restructuring to build Ethiopia’s limited external buffers.

We upgraded the ETHOPI 6 ⅝ 12/11/2024s from Sell to Hold on 7 December at a mid-price of US$65.7 (23.1% YTM). We argued that even if the eurobonds were included in the restructuring, they were likely trading below recovery value based on the terms of the official restructuring and “normal” exit yield assumptions. However, given uncertainty on the conflict, exit yields would likely remain higher than normal, and there was a risk that a more severe restructuring would be required if economic conditions continued to worsen.

Indeed, that turned out to be the trough, and bonds rallied sharply to US$77.4 (17.1% YTM) by mid-February as the government lifted its state of emergency and said ceasefire negotiations were imminent. However, as we argued at the time (and have argued again here), that optimism was misplaced. The bonds have since sold off in the wake of Russia’s invasion of Ukraine, and now trade at US$69.9 (22.2% YTM), above the December lows but down notably since the war in Ukraine began. 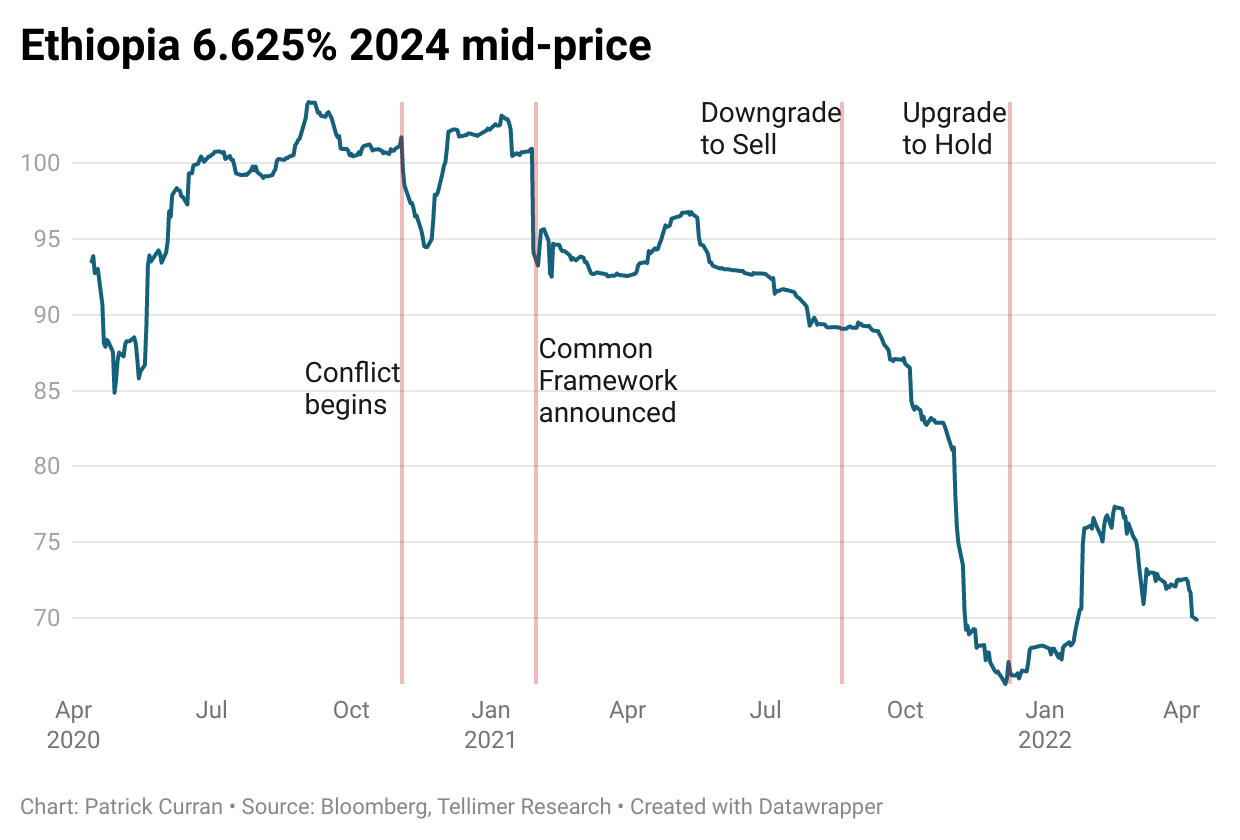 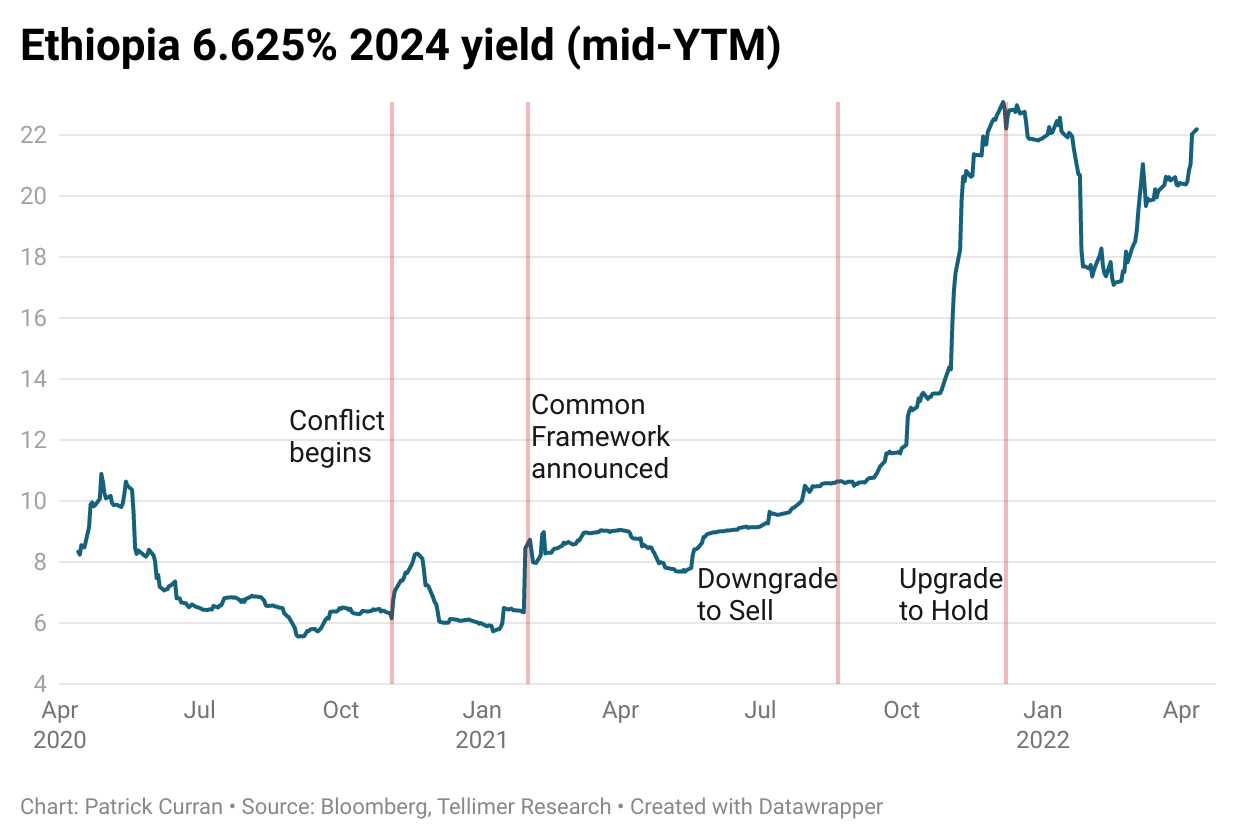 While we still think there is a path to restructuring that doesn’t touch the eurobonds, our conviction has decreased given uncertainty about current economic conditions, ongoing delays to the restructuring process and IMF negotiations, and the worsening humanitarian crisis in the country. While bonds are still likely trading below recovery value, with substantial upside if bonds are excluded from the restructuring, that upside can only be unlocked if and when the conflict allows for a resumption of negotiations.

There is much uncertainty on the path ahead, and we think the recent sell-off has brought Ethiopian eurobonds back in line with fair value by reversing some of the misplaced optimism from investors on the conflict towards the beginning of this year. We maintain our Hold recommendation at US$69.9 (22.2% YTM) for the ETHOPI 6 ⅝ 12/11/2024s as of cob on 11 April on Bloomberg.