The US on Monday imposed sanctions against Ethiopia in response to its handling of the conflict in Tigray. The sanctions include restrictions on visas for Ethiopian and Eritrean officials “responsible for, or complicit in, undermining the resolution of the crisis in Tigray,” and “wide-ranging restrictions on economic and security assistance” (although critical humanitarian aid will continue).

The statement from US Secretary of State Anthony Blinken says that the people of Tigray “continue to suffer human rights violations, abuses, and atrocities, and urgently needed humanitarian relief is being blocked,” and says that “the parties to the conflict in Tigray have taken no meaningful steps to end hostilities or pursue a peaceful resolution.”

The sanctions are the culmination of increasingly hostile rhetoric from the Biden administration, with Blinken accusing Ethiopian and Eritrean forces of “ethnic cleansing” in March. Although the government denied the charges, Prime Minister Abiy Ahmed acknowledged for the first time in March that “reports indicate that atrocities have been committed in Tigray region."

The sanctions follow the suspension of cUS$240mn of direct budget aid from the US and EU earlier this year, and the EU is reportedly considering a more targeted list of sanctions as well. Meanwhile, it is unclear how much of the cUS$1bn of annual US aid to Ethiopia will be impacted by the sanctions, with much of it taking the form of humanitarian aid rather than direct budget support.

More worryingly, the sanctions will reportedly include a request that the World Bank and IMF withhold funding to the country. Ethiopia signed a US$907m funding agreement with the World Bank last month to help with the roll-out of Covid vaccines, support small and medium-sized enterprises impacted by the pandemic, and invest in the electricity sector.

Given that World Bank funding is tied to specific projects, including some of a humanitarian nature, it is unclear how much, if any, will be suspended. Indeed, the World Bank said on Monday that it “does not have the mandate to get involved in the internal governance issues of its member states,” implying that its previous commitments may remain intact. In any case, the suspension of project financing should have little to no direct impact on the fiscal or external financing outlook.

The request to suspend IMF funding, which is aimed at supporting the budget and balance of payments, could be more problematic. The Board has yet to approve the staff-level agreement reached in February for the first and second reviews of Ethiopia’s EFF/ECF programme, with an IMF official saying recently that “financing assurances from creditors for a debt treatment” are required before the reviews are presented to the Board. This has delayed US$448mn of disbursements, out of a total of US$1,657mn of undisbursed funds between now and October 2022.

If this funding fails to materialise, a fiscal and external financing gap could emerge. And, if other donors begin to pull budget support, the situation could get even worse. The IMF has pencilled in US$1.3bn of “official transfers” annually from 2021/22 to 2023/24, which is an integral funding source to cover external financing needs that are projected to average US$5.8bn annually from 2021-25 (nearly 2x reserves, which sat at US$3bn in December), peaking when its US$1bn eurobond matures in 2024. Following the US sanctions, much of that funding is now likely at risk. 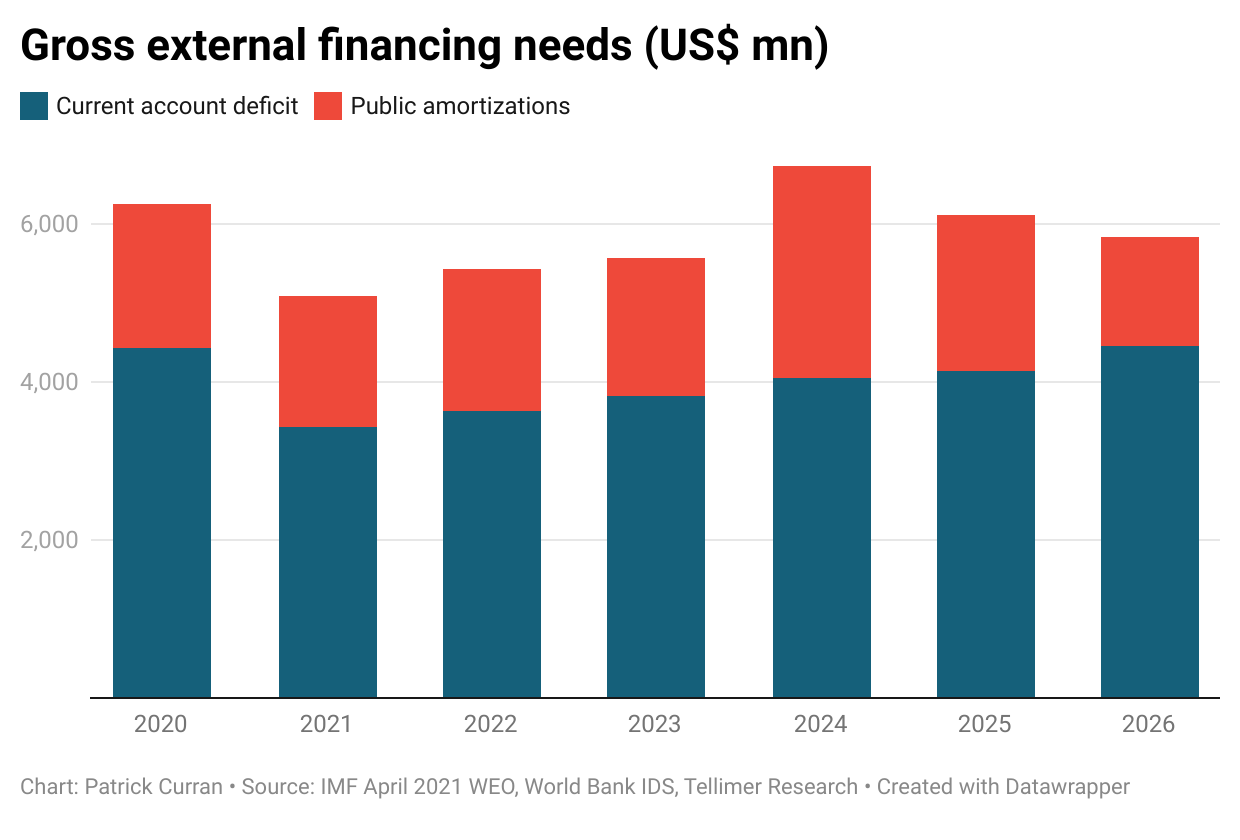 The IMF’s failure to reach Board approval of the first and second programme reviews also has restructuring implications, as countries that seek treatment under the Common Framework are required to request an IMF programme. For countries like Ethiopia, already in a programme, we assume treatment is contingent on successful completion of its reviews, and that a staff-level agreement is probably insufficient (ie Board approval, with a debt sustainability analysis (DSA), is likely a prerequisite for restructuring). So aside from the funding issue, failure to obtain Board approval could also delay the restructuring (and indeed probably is already).

While this may buy a bit more time for bondholders if the government keeps paying while it waits (bolstered by the SDR allocation), it prolongs uncertainty on the nature of the restructuring and could allow time for further macro deterioration, so can hardly be considered a good outcome. It also highlights the apparent issue of circularity in the Common Framework, whereby IMF approval is contingent on “assurances” from creditors but at the same time restructuring negotiations are contingent on IMF programme approval and the associated DSA. None of the three Common Framework participants (Ethiopia, Chad and Zambia) have yet reached “completion point,” so it still isn’t clear how this circularity will be resolved (although, to be fair, it has been a characteristic of many past restructurings, too, so isn’t unique to the Common Framework).

Aside from the issue of Board approval, the sanctions could also complicate the debt restructuring by adding a difficult political dimension that could prolong negotiations. Indeed, Moody’s has already raised concerns on the prolonged nature of the restructuring talks so far. On 17 May, the rating agency downgraded Ethiopia’s credit rating from B2 to Caa1 and maintained the negative outlook, saying that “protracted deliberations regarding Ethiopia’s application for debt relief under the G-20 Common Framework have increased the risk of private sector creditors incurring losses” and “the passage of time since Ethiopiaʼs application to the Common Framework suggests a relatively complex decision by the Common Frameworkʼs creditor committee.” However, it also added that “there remain a number of potential outcomes that do not involve private creditors incurring losses.”

The IMF’s Director of the Africa Department, Abebe Aemro Selassie, said recently that a preliminary DSA by the IMF and World Bank concluded that Ethiopia’s debt is sustainable, “but a reprofiling of debt service in coming years over a longer period will enable a moderate risk of debt distress to be reached by the end of the Fund-supported program.” This meshes with our own DSA in February, which showed that debt was sustainable and that there was not a clear need for debt relief. As the key input to creditor negotiations, this seems to suggest that it is still possible that a solution will be reached without the need for private sector involvement (PSI).

Although Ethiopia's debt appears to be sustainable from a solvency perspective, external liquidity constraints remain high given recurring financing needs (see above) set against low reserves and export earnings. 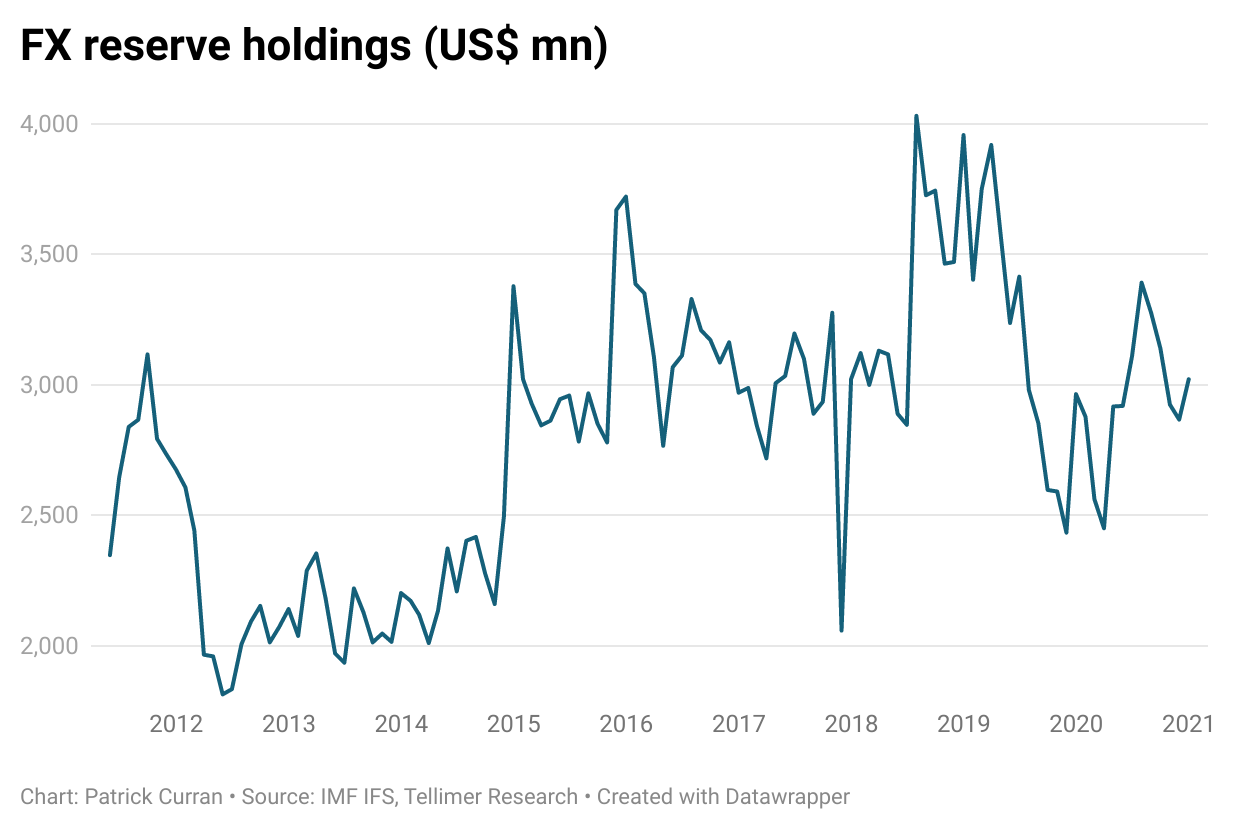 That said, some relief could come in the form of the upcoming SDR allocation (estimated at US$410m, or 13.5% of reserves), which could materialise as soon as September. In addition, the award on Saturday of a new telecom license to the Global Partnership for Ethiopia – a consortium comprising Vodafone, Vodacom, Safaricom, and CDC group – for US$850mn (above the US$600mn bid of the other MTN-led consortium) will also lead to much-needed FX inflows.

The sale will also generate recurring FDI proceeds, with the consortium expected to invest US$8.5bn in their network over the next decade and to create 1.1mn new jobs (directly and indirectly). However, the bids fell short of initial expectations closer to US$1bn, with many prospective bidders scared away by the political crisis and license terms (namely exclusion of a mobile money operating license, which Prime Minister Abiy said probably cut US$500mn from bid levels).

Instead, state-owned Ethio Telecom will be given a year to build expertise in the mobile money sector after launching its own “Telebirr” mobile money service this month, before restrictions on private participation in the sector are lifted. Some companies, like Orange SA, decided to instead wait to bid on the 40% stake in Ethio Telecom that is expected to be auctioned to be afforded a head start into the mobile money market, reducing interest in the license auction.

Ethiopia had originally planned to issue two licenses, but opted to issue just one, with MTN’s bid considered too low and no alternative bids to consider. The plan is to issue the second license later on. If Ethiopia is able to lure back the other international players that had earlier been scared away, then the government might be able to raise another cUS$850m (based on the current winning bid price). However, the outstanding issues will not be easy to address, so a successful second auction is far from a foregone conclusion.

And here, too, the sanctions could complicate matters, with the Vodafone consortium agreeing to take a US$500mn loan from the US International Development Finance Corporation to help fund the acquisition of the license and development costs. It is unclear if that funding will be impacted by the sanctions, but if so it may cause delays as new financing is sought (although the consortium remains confident that it will be able to begin providing service in 2022).

Election delays have also added another layer of uncertainty, with the National Election Board of Ethiopia (NEBE) announcing on 15 May that it would be unable to proceed with the general elections as planned on 5 June due to logistical challenges to the registration process. Elections will now take place on 21 June, but security risks will remain heightened against the current political backdrop and could undermine confidence in the elections or serve as a flashpoint for violence.

Credibility will be further eroded by the decision of the EU to abstain from sending an observer mission, citing concerns over the mission’s independence and communications systems and saying that it was “disappointing that the EU has not received the assurances necessary to extend to the Ethiopian people one of its most visible signs of support for their quest for democracy." If the sanctions cause the US to follow suit, increased doubts over the election outcome will likely stoke even more unrest.

While the successful completion of the telecom license auction is encouraging, the confluence of US sanctions, the Moody’s downgrade, and election delays have pushed Ethiopia’s 6.625% 2024 eurobond down by 3.3pts since its recent peak of US$96.75 on 13 May (and a total of 8.3pts since the start of the Tigray conflict in November, at the time of writing). 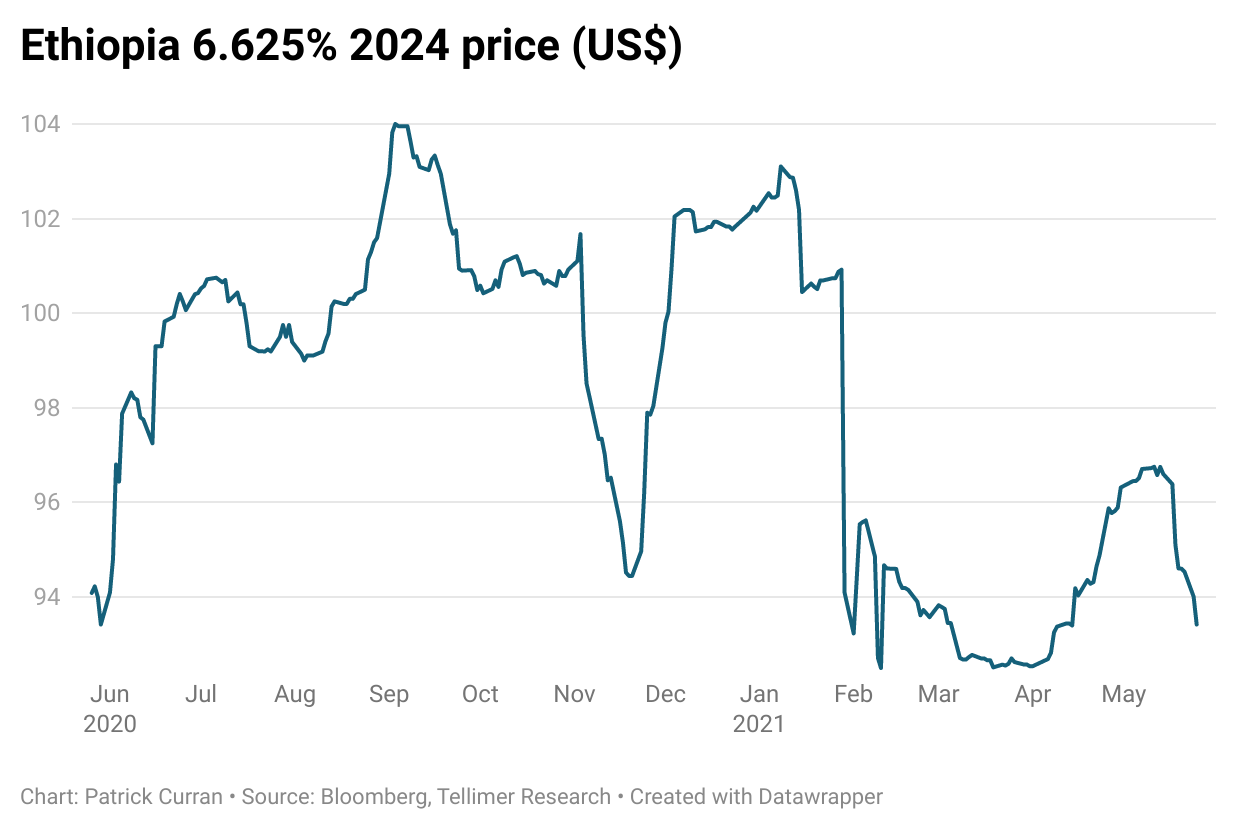 It is still not clear to us whether or not PSI will be required as part of the restructuring process, but delays to Board approval of the first and second EFF/ECF reviews point to likely difficulties, and the sanctions announced on Monday will only serve to make the process more protracted. A US$33mn coupon payment on Ethiopia’s eurobond is due on 11 June, and will be a key signal of whether or not Ethiopia intends to keep honouring its commitments to private creditors for the time being.

Ethiopia: Conflicting reports on the state of the conflict, 2 December