The ETHOPI 6 ⅝ 12/11/2024 eurobond has rallied by 5.5pts (+7.8% mid-price, -328bps z-spread) since yesterday, at the time of writing, amid positive headlines on the conflict. This brings the rally to 16% since we upgraded from Sell to Hold on 7 December, balancing what we saw as bond prices that were below recovery value with the limited prospects for conflict resolution. 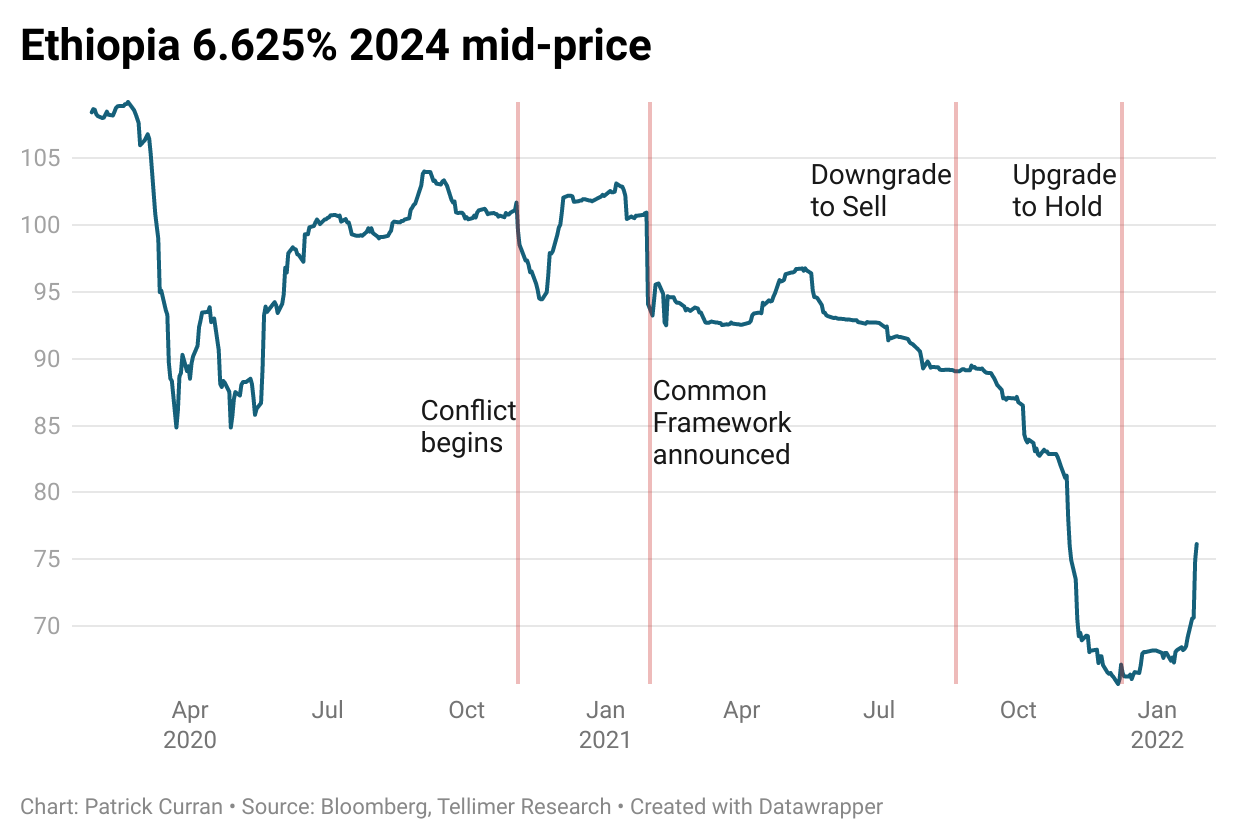 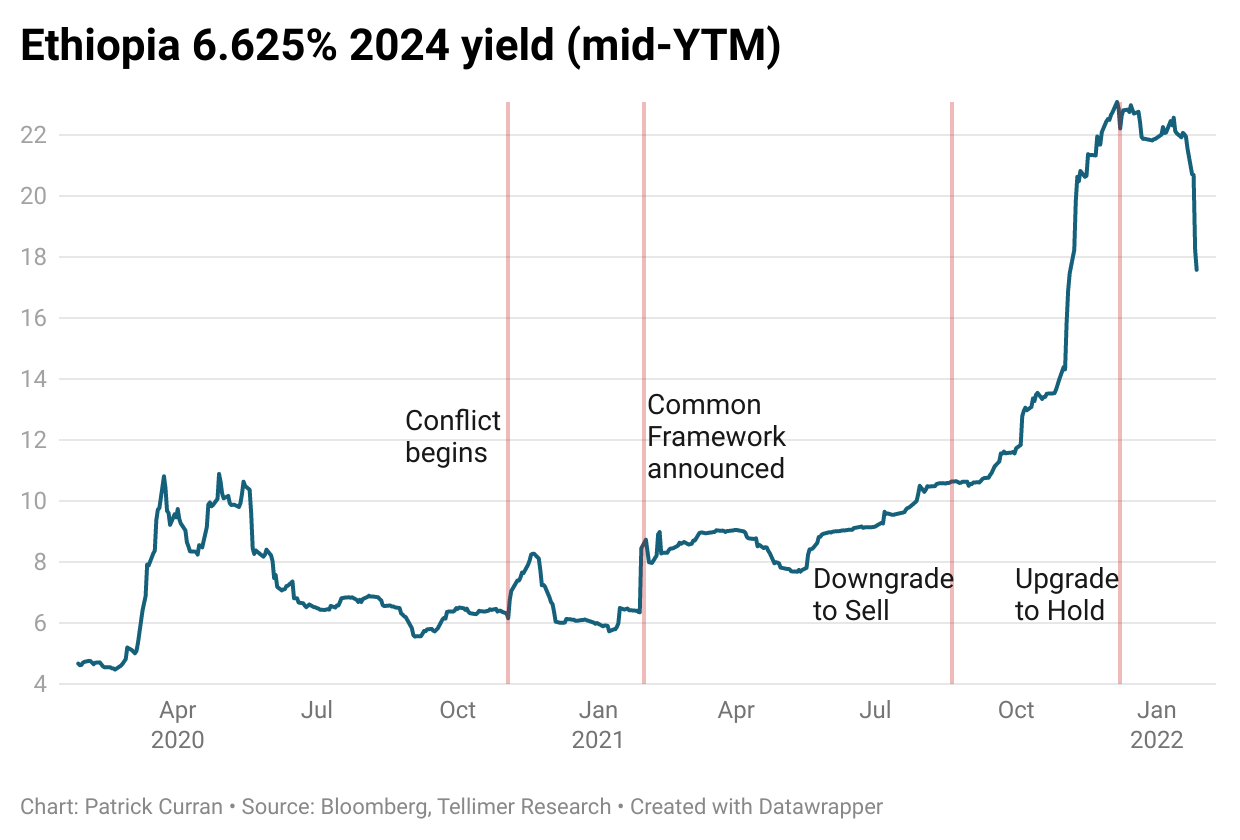 Since then, there have been a number of positive developments related to the ongoing conflict. First, in mid-December the Tigray People's Liberation Front (TPLF) announced a “strategic withdrawal” from certain occupied territories, purportedly to open the door for peace talks and the resumption of aid flows. This was followed by the establishment of an 11-member National Dialogue Commission (which notably excluded Tigrayan and Oromo figures) and an announcement that the government had granted amnesty to several high-level opposition figures to make room for an “all-inclusive national dialogue”, prompting comments from UN Secretary-General Antonio Guterres that “there is now a demonstrable effort to make peace" (see here and here for opposing op-eds on what the national dialogue means for the country).

Yesterday's rally was seemingly driven by an announcement that Ethiopia’s Council of Ministers had lifted the state of emergency in place since November 2020, with Prime Minister Abiy Ahmed’s office saying that “the threat is now at a level that can be countered by formal law enforcement action”. Further, in a private meeting with a diaspora group, Abiy reportedly said there would imminently be ceasefire negotiations. Lastly, the International Committee of the Red Cross (ICRC) reportedly made its first delivery of medical supplies to the Tigrayan capital Mekelle since last September, possibly signaling an end to what the UN has called a de facto blockade that has prevented essential food and medicine from reaching the region.

While these developments are undoubtedly positive, the market reaction looks excessive. There is still a long road to travel before a durable ceasefire is reached, underscored by the TPLF’s statement on Tuesday that it had been provoked to take "robust actions" in the neighbouring Afar region to counter aggression from pro-government troops and clear areas near Tigray "that could serve as a springboard for further attacks on our positions". This follows accusations that the government had continued to make military incursions and launch drone attacks in recent months despite the ongoing peace talks, reportedly killing hundreds of civilians, including 58 at a refugee camp and 17 at a flour mill this month alone.

Further, TPLF spokesman Getachew Reda responded to this week’s ICRC aid flight by saying "It certainly is a good start but a far cry from the massive intervention required in the face of the crisis that Tigray is currently facing,” with the UN projecting that c400,000 Tigrayans face famine-like conditions and c9.4mn others are in need food aid as a result of the conflict. Meanwhile, last month, the UN launched an independent investigation into reports of violations and abuses on both sides of the conflict that could amount to “crimes against humanity,” which underscores the severity of the ongoing conflict and the potential difficulty agreeing to a mutually satisfactory peace deal.

While we welcome the progress achieved over the past 1-2 months towards a resolution to the conflict, we still think lots of work needs to be done to reach a durable solution. The proverbial genie has been let out of the bottle, and won’t be so easily stuffed back in by superficial ceasefire announcements. Indeed, Ethiopia still has a long road to travel before the conflict is in the rearview, and in the meantime, there will be an ever-present risk of backsliding as government and opposition forces respond to actual and perceived aggressions and reckon with the atrocities that have been propagated on both sides of the conflict.

We eagerly await further announcements of progress towards a resolution to the conflict (not to mention progress towards debt restructuring and the release of more timely economic data), and, in the meantime, retain our Hold recommendation on the ETHOPI 6 ⅝ 12/11/2024s at a mid-price of US$74.9 (mid-YTM of 18.2%) at cob on 26 January on Bloomberg.