Ethiopia on the brink of civil war

Prime Minister Abiy Ahmed has ordered the military to respond to an alleged attack on an army camp in the Tigray region, escalating tensions to the brink of civil war. With simmering conflicts on several fronts across the country and region, continued escalation could undermine Ethiopia’s investment case.

That said, fundamentals have continued to improve (see here) and we retain our Hold recommendation on Ethiopia 24s (see here). Further price drops could potentially create a buy opportunity (the 24s are down c2.2%, or 68bps, as of midday New York), but only if Abiy manages to deescalate the conflict. Otherwise, ethnic tensions will continue to weigh on the credit.

This brief note will unpack what has happened, how we got here, and its potential implications.

PM Abiy has ordered the military to respond to an alleged attack on an army camp in the Tigray region. He accuses the Tigray People’s Liberation Front (TPLF), the governing party in the region, of attempting to provoke a war by attacking a major Ethiopian army base in Tigray early Wednesday morning and attempting to steal artillery and other military equipment.

The Council of Ministers has declared a six-month state of emergency in the region and has formed a State of Emergency Task Force to be led by the chief of staff of the Armed Forces and report to the PM. Phone lines and internet have been cut in Tigray since the attack.

Abiy said in a statement that "the last red line has been crossed with this morning's attacks, and the federal government is therefore forced into a military confrontation" and has been deployed to Tigray to "carry out their mission to save the country and the region."

Meanwhile, Debretsion Gebremichael, Tigray's regional president, was quoted on Tuesday saying, "We have prepared our military of special force not in need of a war, but if the worst comes, to defend ourselves." Tigray's armed forces were instrumental in the overthrow of Ethiopia's Marxist regime in 1991, and the region is heavily militarised.

How did we get here?

Tigrayans had dominated Ethiopia's government from 1991 until Abiy, an ethnic Oromo, came to power in 2018. His appointment had been meant to assuage criticism from the Oromo and Amhara regions, who felt excluded from power under the TPLF-dominated government. However, Abiy’s plans to establish a more unified national identity have been met by opposition across Ethiopia’s ten ethnically based states, which prefer the significant autonomy granted under the current federal structure. 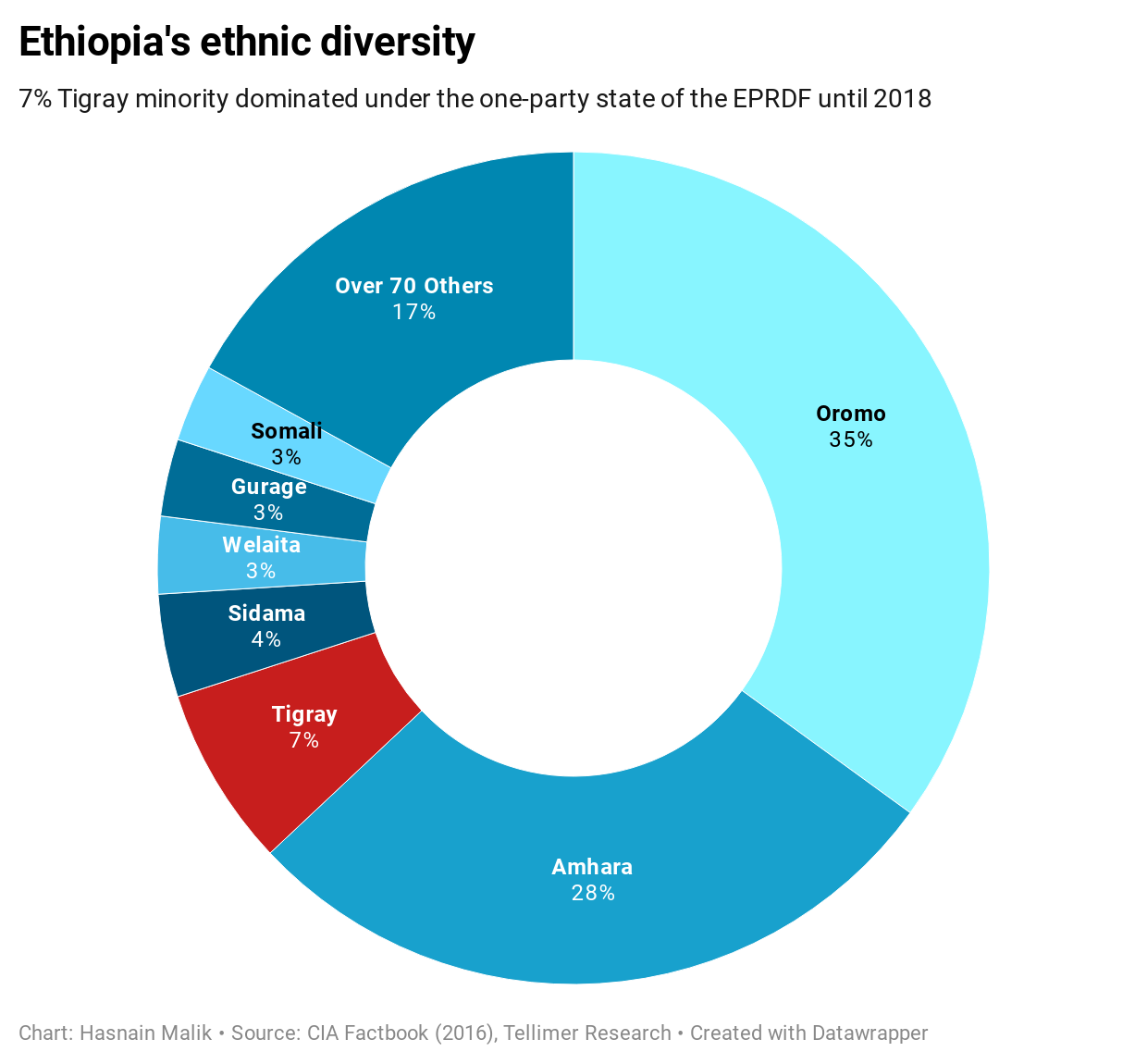 The TPLF refused to join Abiy’s new Prosperity Party last December, which was meant to succeed the ruling EPRDF coalition that had long united Ethiopia’s main ethnic groups/states (the Tigrayans, Oromo, Amhara and the Southern Nations) under one roof.

Tensions between Abiy's party and the TPLF began to escalate in September when the state held its own election after the national election was postponed because of Covid (it is now expected to take place in late May or early June).

The government responded by ordering federal officials to cut off communications with Tigrayan official in September and cutting budget transfers to the region in October, which regional leaders called a "declaration of war".

Some commentators suspect that Abiy had been planning the invasion for weeks, and seized upon the US election to strike while the world was distracted. The TPLF views the Ethiopian army as an occupying force, while a government statement says that "the TPLF has chosen to wage war."

What does it mean?

The conflict comes at a period of already heightened turmoil for Ethiopia. On Sunday, attackers reportedly massacred at least 54 ethnic Amharas in the western Oromia region. Abiy attributed the attack to a group called the Oromo Liberation Army, which he said was supported by the Tigray government (though the TPLF has denied this).

Tensions have also been running high between Abiy and his home region of Oromo since the killing of popular Oromo singer Hachalu Hundessa in June, resulting in nearly 250 deaths in clashes between protesters and security forces and in inter-ethnic attacks. Intercommunal fighting in Amhara in September also reportedly left at least 120 people dead and forced hundreds more to flee their homes, according to the opposition National Movement of Amhara.

Across Ethiopia's borders, tensions with Sudan and Egypt remain amid drawn-out negotiations on plans to fill the Grand Ethiopian Renaissance Dam (GERD). Talks resumed at the end of October after Egypt withdrew two months ago, but the risk of conflict will remain elevated until the three countries are able to find a mutually agreeable solution (see here).

The Trump administration had suspended aid to Ethiopia due to the impasse, and Trump fanned the flames recently by suggesting that Egypt will blow up the dam. It is unclear if the tone towards Ethiopia would change under a new administration (related reading: What the US election means for foreign policy).

Aside from heightened political risk, Ethiopia is struggling to contain a renewed locust infestation, which is expected to continue until March and could threaten food security in Ethiopia before spreading to its East African neighbours like Kenya.

Political instability in Ethiopia threatens to derail Abiy's ambitious reform agenda, and could destabilise the entire Horn of Africa if fighting continues to escalate, according to diplomatic sources cited by Reuters.

Ethiopia 24s have fallen by c2.2% (68bps) as of midday New York, and could drop further if the conflict is not brought under control. On the one hand, this could create Buy opportunities amid a relatively strong fundamental outlook.