On 23 February, the IMF reached a staff-level agreement for the combined first and second reviews of Ethiopia’s ECF/EFF programme. The first review had been delayed since April – with a staff-level agreement in August never giving way to Board approval – and the second since October, delaying a combined cUS$647mn of disbursements. However, the programme had been re-phased in April alongside the disbursal of US$411mn in emergency RFI funding, which was meant to be offset by decreased future funding under the EFF. As such, it is unclear how much Ethiopia will actually receive if the funding is approved by the Board.

Importantly, the statement notes that "to strengthen debt sustainability, the authorities aim to lower the risk of debt distress rating to moderate by reprofiling debt service obligations. In this context, the Fund welcomes Ethiopia's request for debt treatment under the G20 Common Framework."

The statement also says that performance under the programme "has been strong" and that "Program design has been adjusted to account for the pandemic, and the authorities remain committed to medium-term reforms."

Overall, the statement is somewhat bland, without providing many numbers, and offers little in the way of explanations for the many outstanding questions related to Ethiopia's external liquidity situation and restructuring plans (see our initial thoughts here and here). We’ll have to wait for the Board paper to be published to get more information and the all-important DSA.

That said, it might offer some clues, and we highlight our key takeaways below.

Why was a staff-level agreement reached now?

The sudden timing may seem a bit of a surprise given the delays to the reviews experienced so far. But after 10 months of delays since the initial April 2020 deadline and six months since the false alarm in August, the staff-level agreement for the first two reviews comes hot on the heels of Ethiopia's announcement that it would restructure its debt under the Common Framework. This may not be a coincidence.

This could even imply that the Common Framework request was a crucial prior action. Indeed, the Common Framework implies that a country needs to be in an IMF programme for the Paris Club and other bilateral creditors to decide on debt relief, so we should have expected that the IMF would have to approve the review (or a new programme) at some point anyway.

We have also expressed concerns that, given a lack of timely data, Ethiopia's balance of payments (BOP) situation could be even worse than implied by official data, delaying the IMF reviews. While approval could imply that the BOP picture isn't as disastrous as some may have feared, the press release does not cite any BOP or reserve data to back that up. As such, we will have to wait until the matter goes to the Board and the report is published before there is more clarity on Ethiopia’s BOP outlook.

What we don't know is how much money might be disbursed under the combined review, which may be of interest to bondholders.

While the IMF welcomes the authorities' request for the Common Framework (and they may even have prodded them into it), the statement doesn't provide much clarity on whether PSI will be required. In fact, it doesn't mention private creditors or PSI at all, which could be interpreted positively. Or maybe the IMF is leaving the door open.

It is still not obvious what this means for private creditors and whether the IMF is saying that there must be private creditor losses under the Common Framework. On the one hand, there may be a strong argument for excluding Ethiopia's eurobonds from the restructuring process, but on the other, it may be difficult under the comparability of treatment principal to get other bilateral creditors outside the Paris Club to play ball without PSI.

But we notice the statement does refer to a "reprofiling" of debt service obligations rather than a "restructuring". We could be reading too much into it, but this could be a deliberate choice of words by the IMF to signal that a milder treatment is foreseen, more akin to a "liability management" exercise of bilateral debt along the lines of DSSI-like cashflow relief rather than a bona fide restructuring. Indeed, our own DSA does not seem to indicate a clear need for debt restructuring as long as liquidity constraints can be managed.

Will the Board approve the review this time?

While the staff-level agreement suggests Board approval should soon be forthcoming, the false alarm in August shows that this may not necessarily be the case. In fact, the statement says that the agreement is still subject to "receipt of the necessary financing assurances from international partners." Hence, obtaining financing assurances from bilateral creditors is a prior action for Board approval.

Is the statement positive or negative for the bonds?

As markets tried to read the tea leaves from this latest statement, bonds traded relatively flat and continue to fluctuate just below US$95 after the initial drop that followed the restructuring announcement. 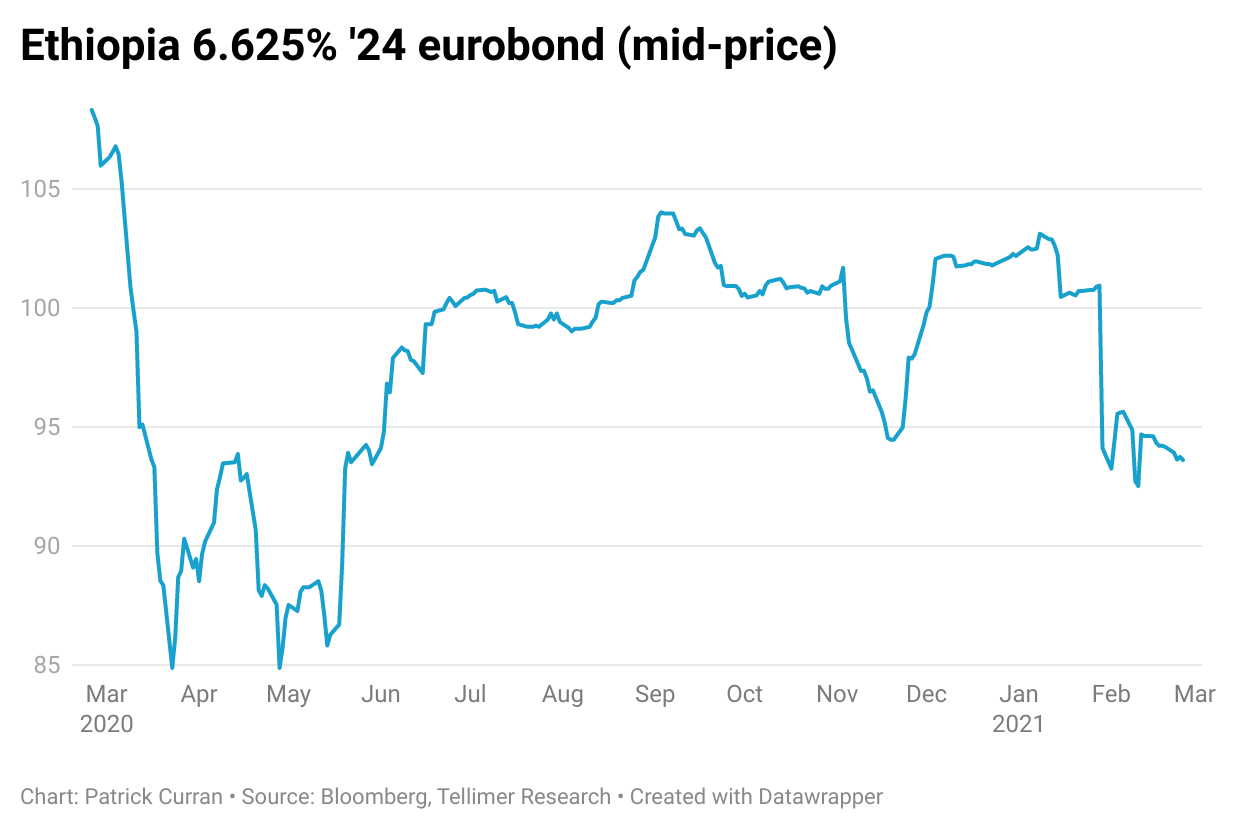 On balance, we think the statement is neutral-to-slightly positive. The statement provides little clarity on PSI, but at least seems to leave the door open to a restructuring without it. And while Board approval is not a foregone conclusion, evidence that the programme is close to getting back on track should be taken as a positive.

If and when the Board paper is released, we could get more clarity on these outstanding questions. As a major test case of the still untested Common Framework, what happens in Ethiopia will be a clear signal of how the process is meant to unfold. However, as the initiative is in its infancy, we doubt the official sector has all the answers themselves.

So far it seems to be unfolding along the same lines as a restructuring pre-Common Framework – the restructuring is announced, an IMF programme is required to demonstrate a commitment to reforms and outline what is needed from the restructuring, and this is used — alongside the analysis of the government and bondholders — to hash out the terms of the restructuring via negotiations and dialogue. The key difference under the Common Framework is to bring non-traditional bilaterals, outside the Paris Club, into this process.

From this perspective, the Common Framework is just a way to "formalise" the process that has long been followed. Or it could be a way to simply expand liquidity relief from DSSI to a wider group of creditors and over a longer horizon, without implying anything about the need for PSI or a broader debt restructuring. In any case, we eagerly await the Board review and subsequent report before drawing any firm conclusions. For now, we maintain our Hold recommendation on Ethiopia '24s.

Conflicting reports on the state of the conflict, 2 December