Ethiopia has been held back by its telecoms monopoly, but change is coming

The Ethiopian government is in the process of privatising part of its telecommunications industry, by selling two licenses and a 40% stake in state-owned monopoly operator Ethio Telecom, which has a client base of c49mn subscribers. The process started in 2020 as part of an effort to privatise some of its industries (Telecommunication, Sugar and Aviation) to raise money for the country’s foreign reserves and accelerate economic growth. However, the process has been extended a few times and privatisation of the aviation sector has been halted.

In the past week, Ethiopia has received just two bids for the telcoms licenses, from MTN and a Safaricom-led consortium. And it is clear that for a number of reasons (such as strict regulations, domestic political unrest and economic challenges), other international operators are choosing to stay on the sidelines, despite the growth potential of the sector. Ethiopia ranks 27 out of 30 in our emerging market fintech financial inclusion scorecard due to very high data cost, low mobile phone and low internet penetration.

Safaricom had considered acquiring a stake in Ethio Telecom in 2019, but the deal faltered after the Ethiopian government said that only local companies could invest in the sector.

Ethiopia is one of the few countries in the world that still has a state-owned monopoly in telecommunications. As with many African state-run systems, Ethio Telecom's efficiency level is low and Ethiopia as a country is characterised by a very low mobile penetration rate of 50.3% (versus the African average of 82.3%). Consistent and affordable high-speed internet is a challenge for the country, alongside the frequent internet shutdowns. 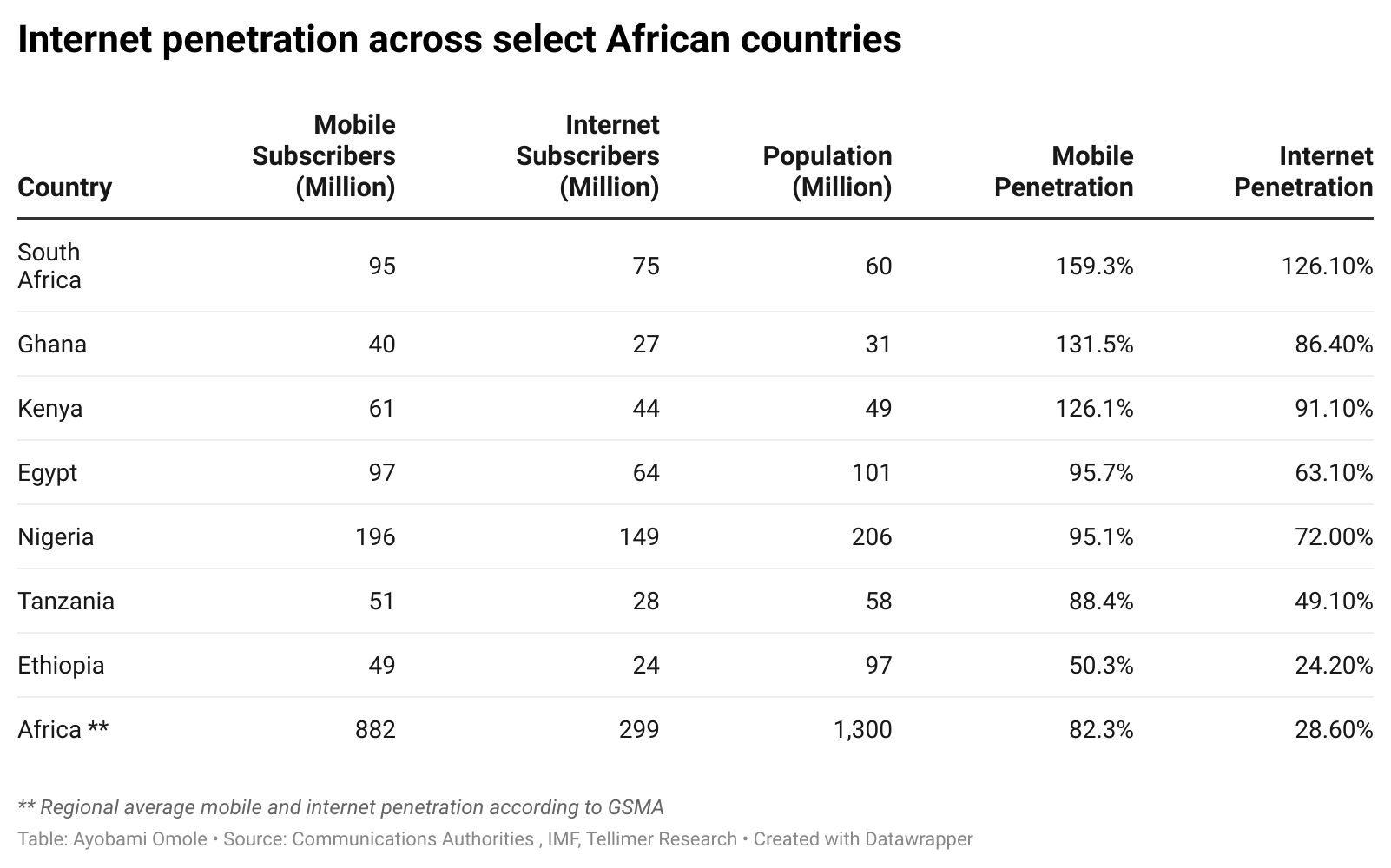 The champions of the next phase

The lack of competition in the country is, we think, the single biggest reason for the low mobile penetration rate. However, the two bidders thus far for licenses are well-positioned to give Ethio Telecom a run for its money:

Internet is not the only problem

Financial inclusion in Ethiopia is low, which is not unusual in Africa. However, unlike a number of countries in the region – for example, Kenya, South Africa and Ghana – Ethiopia has not yet tapped into the trend of telco-led digital banking via mobile phones (or 'mobile money') to try to solve this challenge.

MTN’s MoMo and Safaricom’s M-Pesa are strong case studies of how telco-led (rather than bank-led) digital banking platforms can help accelerate financial inclusion, and these two players have demonstrated this in various countries. Sadly though, the Ethiopian government has banned new entrants in the sector from participating in mobile money.

Currently, mobile money in Ethiopia is run by a consortium of banks through the M-BIRR service, which currently has c1.9mn customers. Ethio Telecom has announced plans to launch its own mobile money service, TeleBirr, in May. But we are not optimistic about the likely uptake of the service and the ability of Ethio Telecom to efficiently manage TeleBirr.

The winners of the bids will be announced in May and it is highly likely that at least one of the two candidates thus far will be awarded a license, as the Ethiopian government seems more committed to privatising the telecommunication sector than other segments of the economy.

Safaricom has formed a consortium with other players (taking a 51% stake for itself) because of the high cost of entry into the Ethiopian market. If it wins, the first few years will be characterised by investment in infrastructure and a drive to acquire customers.

Another reason for those considering investing in Ethiopian telecoms to be wary (aside from the costs mentioned above and the restrictions on the mobile money sector) is that new players are expected to rent Ethio Telecom’s infrastructure (towers, cables and other kits) or to build their own. We think Ethiopia may reconsider its stance on this down the line.

Overall though, we are optimistic for the winning bidders because of: 1) the huge size of the market; 2) Ethiopia's economic growth prospects; and 3) the technical capacity of the candidates, especially Safaricom, to roll out coverage.

Despite Ethiopia being one of the most populous countries in Africa (c97mn), its tech ecosystem has not flourished relative to that of its peers. In our Ultimate Guide to African Fintech, published in April 2020, we found that Ethiopia housed just 3% of fintechs on the continent. By contrast, South Africa had 33%, Kenya 17%,  Nigeria 13% and Egypt 8%, and not much has changed since then. A large population is attractive for innovators, but Ethiopia's poor internet (among other factors) has been a serious pain point for fintech entrepreneurs.

Many concerns remain, especially around infrastructure and the ban on mobile money participation, but Ethiopia’s move to privatise its telecoms sector is a step in the right direction. As licenses get awarded and operations kick off, we expect to see an increase in tech innovation, too.