Ethiopia: Downgrade to Sell as conflict and economy worsen

In the month since we last wrote on Ethiopia’s conflict, the outlook has continued to deteriorate. With the Tigray Peoples Liberation Front (TPLF) taking control of the regional capital of Mekelle, fighting has spread beyond Tigray to the neighbouring regions of Amhara and Afar. TPLF spokesman Getachew Reda, claims that "We are not interested in any territorial gains in Afar, we are more interested in degrading enemy fighting capabilities." Nonetheless, the spreading conflict is still a major cause for concern.

The TPLF and Oromo Liberation Army (OLA) have also announced a military alliance with the goal of overthrowing Prime Minister Abiy Ahmed's government in Addis Ababa, with OLA leader Kumsa Diriba recently saying that "The only solution now is overthrowing this government militarily, speaking the language they want to be spoken to." He also hinted at negotiations with other groups in the country, saying that "There’s going to be a grand coalition against [PM Abiy's] regime." 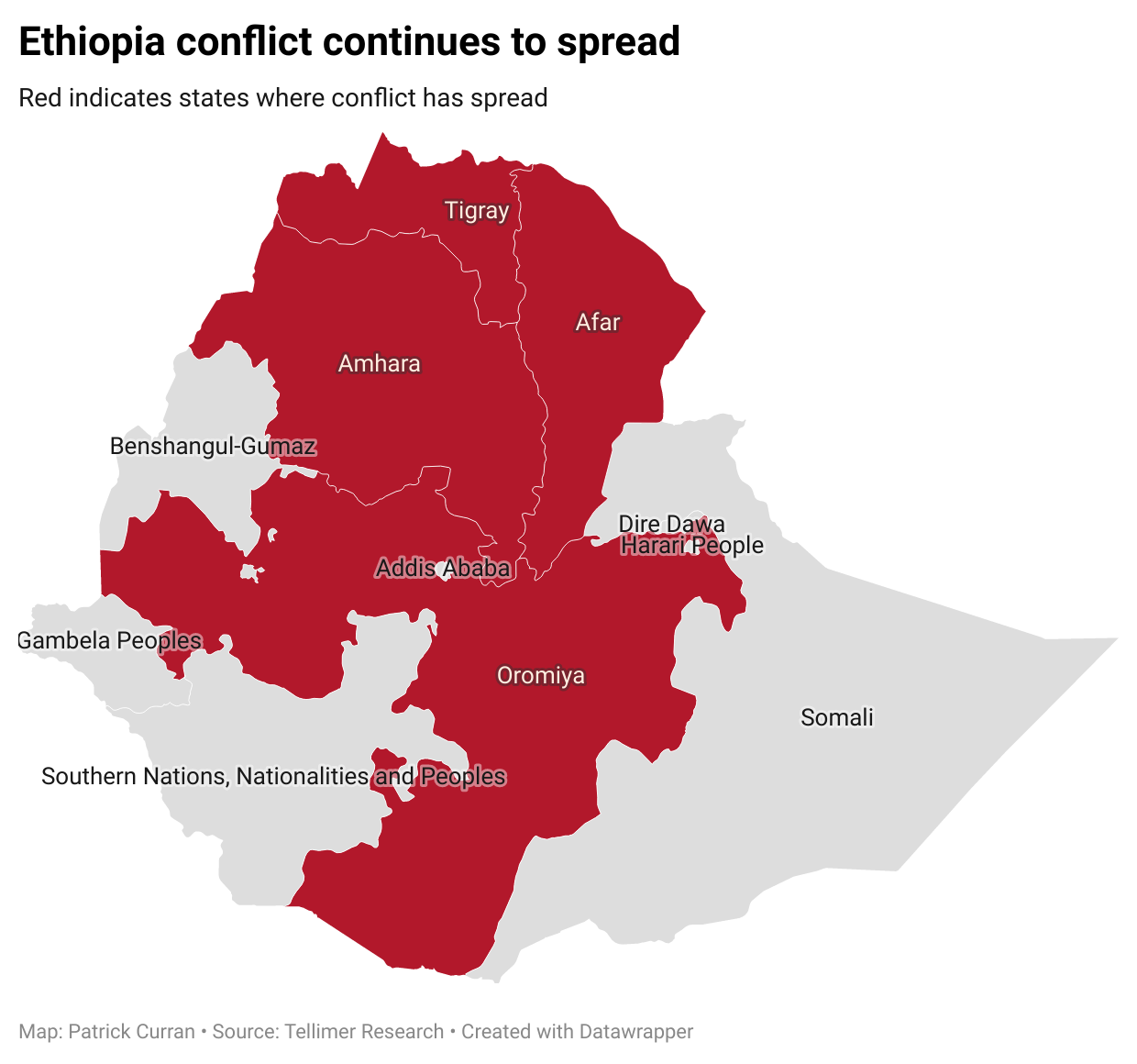 In response, PM Abiy has called on all Ethiopians to join the fight against the TPLF, saying "Now is the right time for all capable Ethiopians who are of age to join the defence forces, special forces and militias and show your patriotism." He has also warned that Ethiopia could fall apart like Somalia, Syria, or Libya due to what he described as Western conspiracies against his government.

As the fighting continues to escalate, there has been a barrage of alarming reports of human rights abuses by both sides and the mounting humanitarian cost of the conflict. UN spokesman Stephane Dujarric said, "It's one of these cases where we've run out of words to describe the horror of what civilians are being inflicted." Among the reports:

Efforts to respond to the humanitarian crisis have been hampered by the ongoing fighting and government restrictions, with just 10% of the aid needed for Tigray reaching the region in recent weeks, according to USAID administrator Samantha Power. The government has suspended the activities of Medecins Sans Frontieres and the Norwegian Refugee Council over accusations of disseminating misinformation, and phone, internet and banking services remain cut off in the region.

The economic cost of the fighting has also begun to mount, jeopardising key trade routes. Last month protesters temporarily blocked and damaged the road and rail corridor connecting Ethiopia to Djibouti, which handles 95% of landlocked Ethiopia's maritime trade, after a clash with Afar militia left 300 dead.  The OLA has also launched an offensive that could block the highway to Moyale, which is the only modern border post between Kenya and Ethiopia.

International condemnation of the conflict has also escalated, risking further sanctions against the country and the loss of official assistance, which reached over US$1.8bn in 2020. US President Biden has sent a special envoy to Ethiopia from 15-24 August to urge the government and TPLF to launch negotiations, with an unnamed congressional aide telling the Associated Press that "I understand all options are on the table, from Global Magnitsky [sanctions over human rights violations] to an executive order on sanctions, to removal from [the African Growth and Opportunity Act], to more restrictive measures on assistance," including blocking Ethiopia's efforts to get funding from IFIs (like the IMF).

France has also suspended a EUR85mn deal on military cooperation with Ethiopia that was agreed in March 2019 to help Ethiopia build a navy, with President Macron calling for dialogue between the Ethiopian government and the TPLF. The UN Security Council has also demanded a ceasefire and access for aid workers to the affected regions, and the EU has suspended financial support for the Ethiopian state. The international community is deeply concerned that the conflict could destabilise the whole Horn of Africa region, with Eritrean fighters still fighting alongside the government despite promises to withdraw and refugees spilling over the border into Sudan and, if the conflict spreads, beyond.

Economy beginning to capitulate to the conflict

Worrying signals have also begun to emerge from Ethiopia's economy. Data on reserves show a sharp decline in Q1, with the National Bank of Ethiopia (NBE) reserves falling from US$3bn in December to US$2.2bn in March before stabilising around US$2.4bn in May. With the NBE recording US$3.8bn of foreign liabilities in Q1, net reserves are likely around negative US$1.4bn. And with a projected current account deficit of US$3.8bn and external public amortisations of US$2bn on average from 2021-25, reserves could quickly dwindle if the conflict causes official financing to dry up. 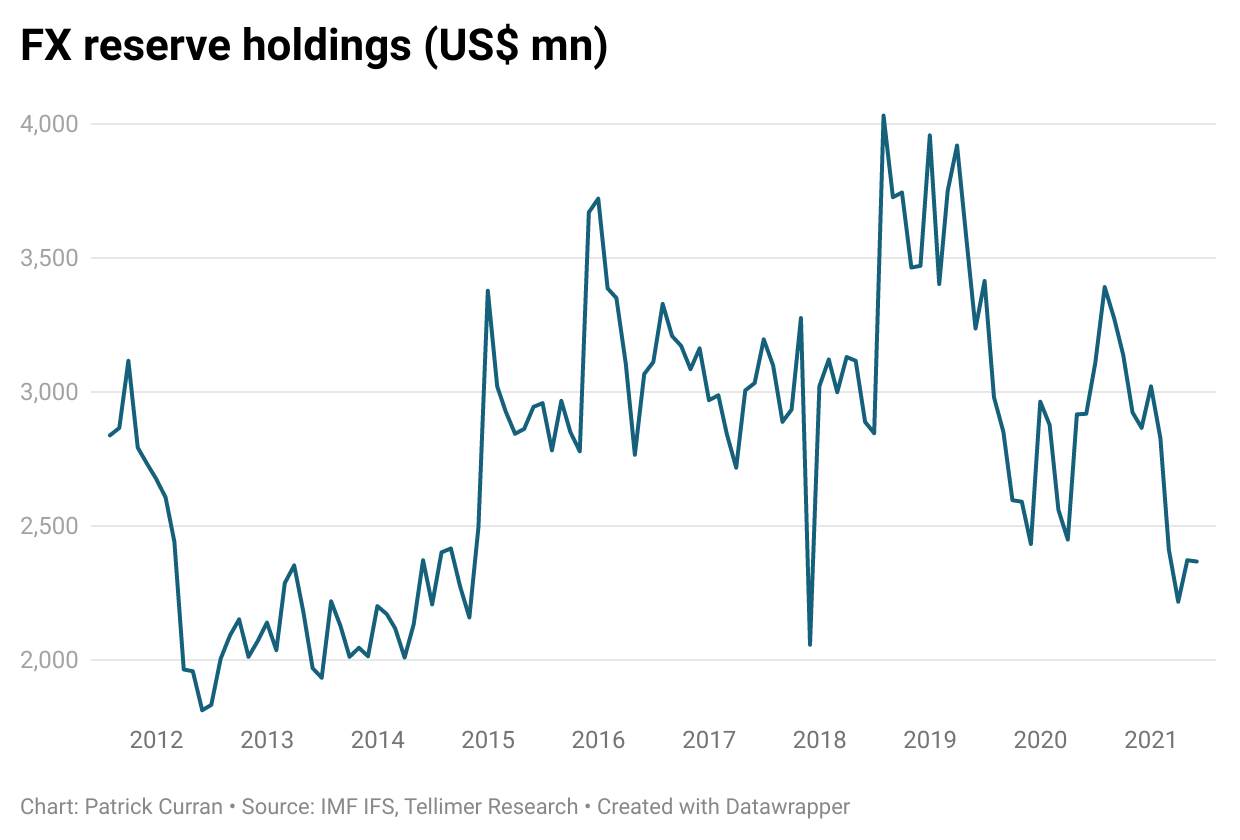 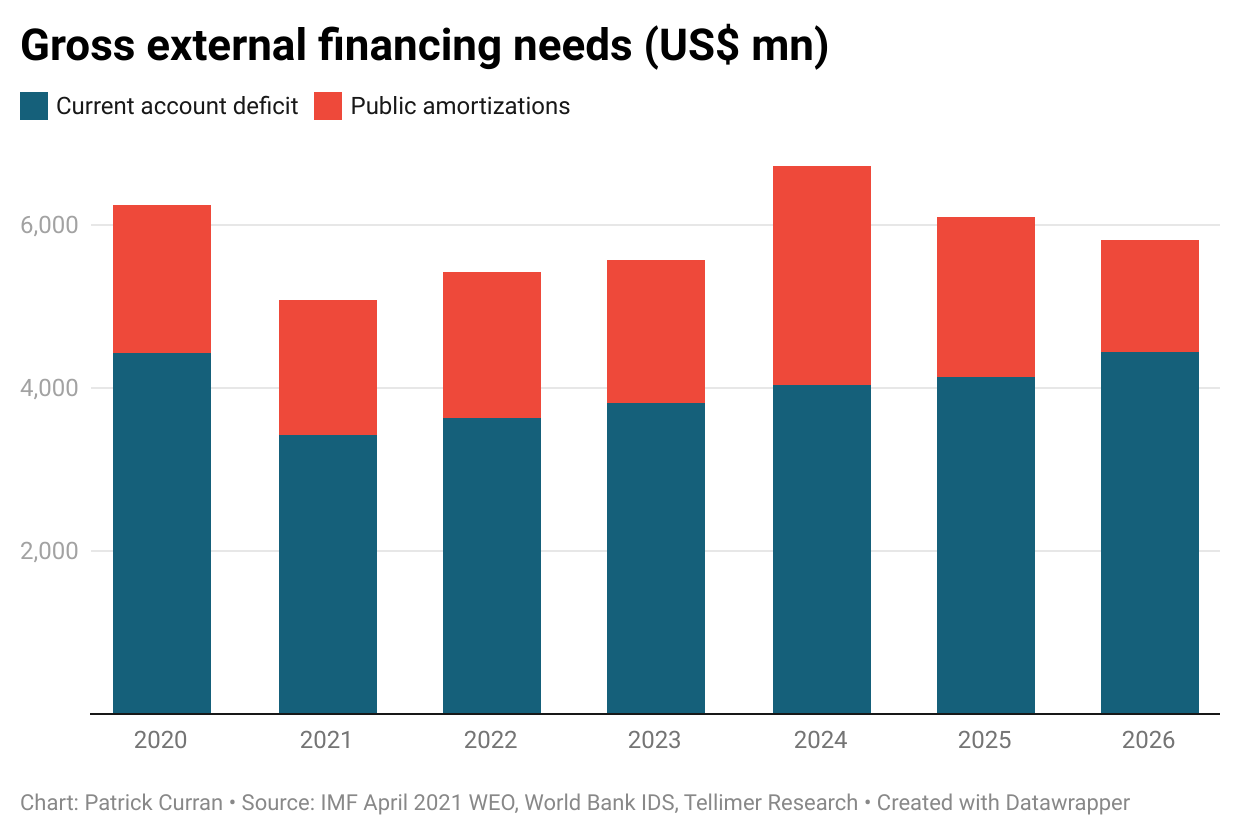 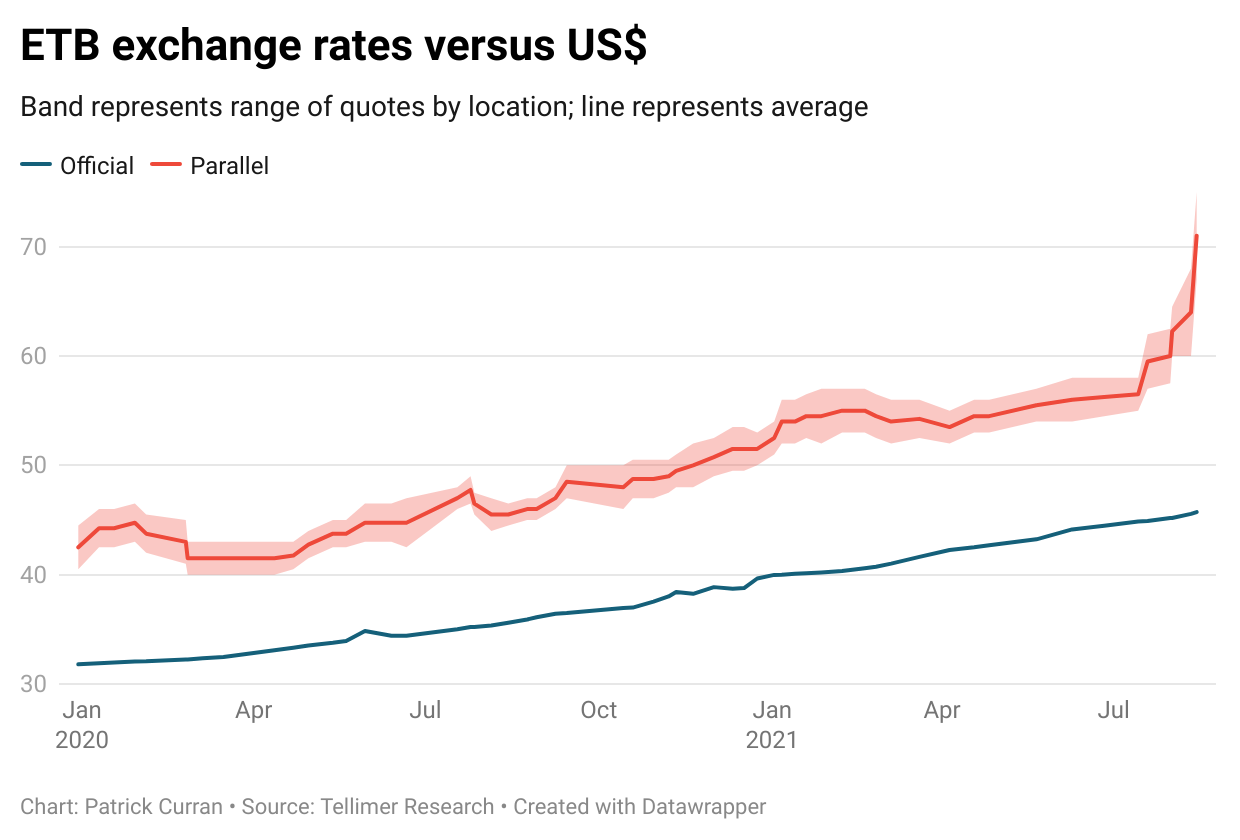 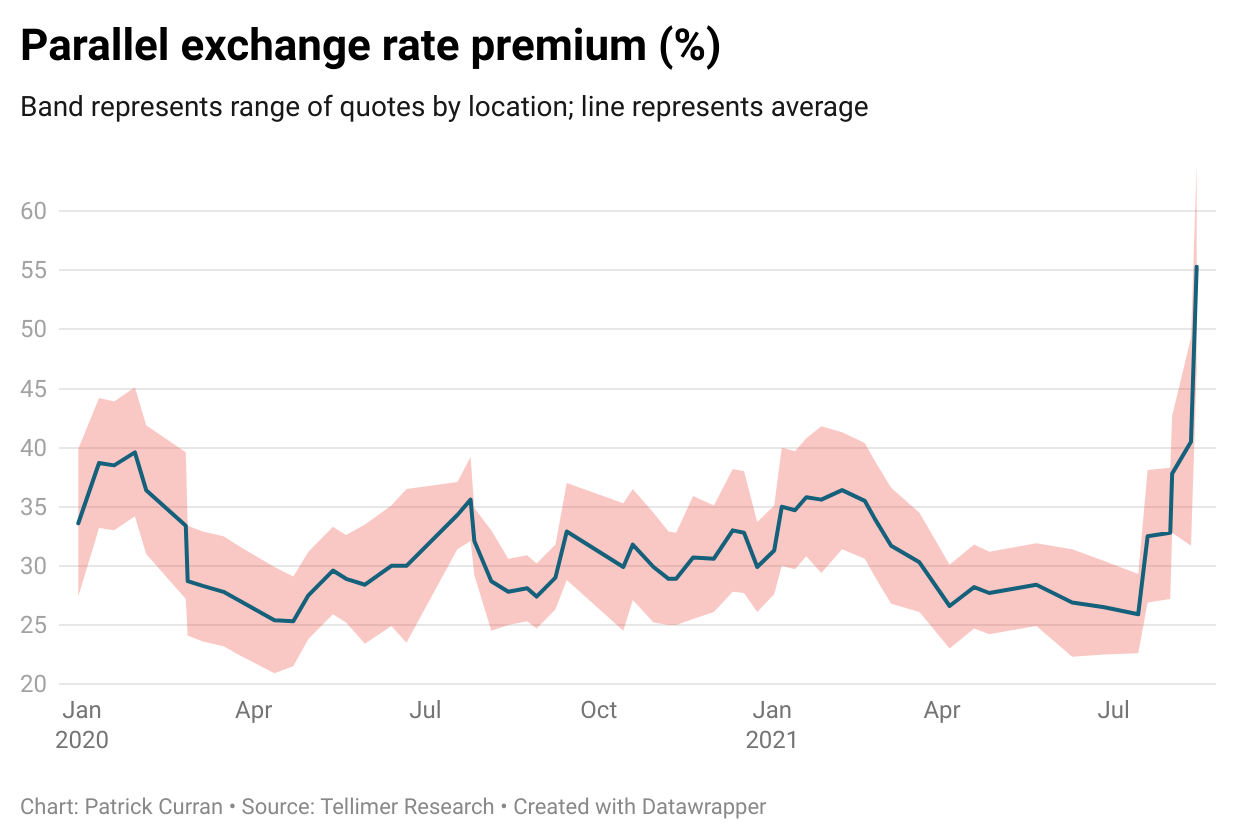 In response, the NBE has asked all commercial banks to temporarily suspend providing loans backed by collateral, such as land and buildings, amid concerns that funds are being used to speculate on the black market. Meanwhile, the last two local government bond auctions on 14 and 28 July were both c65% undersubscribed, pointing to financing constraints for the cash-strapped government, and inflation continued to rise from 24.6% to 26.4% in July on the back of spiralling food prices.

While Moulin did not name the holdout, most think that it is China, which is Ethiopia's largest creditor. An official from Ethiopia's finance ministry has also indicated that China Exim is withholding about US$339mn in credit until restructuring negotiations are finalised. It is unclear what the sticking point is – if the holdout is a member of the Paris Club, it could be that concerns over human rights abuses have undermined the case for assistance. If it is indeed China, some have theorised that it could be a ploy to hold Ethiopia hostage and cause its restructuring to fail, thus disincentivising other countries from joining the Common Framework.

Whatever the motive, time is running out for Ethiopia. IMF Board approval for its first and second IMF programme reviews is contingent on the receipt of financing assurances from creditors to get Ethiopia to moderate risk of debt distress by the end of the programme, so until the second phase of its official sector restructuring is finalised, the programme will not be approved (and even if Paris Club talks are resolved, sanctions could still derail the programme). We understand the programme will expire on 19 September if Board approval is not secured by then, although this seems unusual to us given the programme was originally scheduled to expire in December 2022 and typically failure to complete subsequent reviews would simply mean the programme would lapse incomplete at that date unless cancelled by the authorities. It might be that a new end date has been imposed to focus the restructuring, but there has been little clarity on this issue. In any case, the apparent deadline provides some context for the statement last month from MD Kristalina Georgieva urging the creditor committee to be urgently formed.

With exactly a month to complete the restructuring and secure Board approval, there is a high probability that the programme will expire, sending the restructuring process back to square one. If it does expire, eurobonds could take a major hit, as we don't think the deadline is fully appreciated by the market yet.

We have maintained a Hold recommendation on Ethiopia's 2024 eurobond since it announced its accession to the Common Framework earlier this year, balancing the risk that bondholders are forced to restructure to satisfy the "comparability of treatment" principle with our view that restructuring the eurobond is neither necessary nor desirable (with the government continuing to say that the eurobonds will not be restructured, and the IMF leaving the door open for their exclusion – as of earlier this month we understand that the government had still not reached out to bondholders).

If eurobonds are excluded from the restructuring, we think prices could reach US$85-96 based on exit yields of 8-12%, while if bonds are restructured on the same terms as the first phase of the official sector restructuring, we see a recovery value of US$74-90 and if they are restructured on the same terms of the ongoing second phase, we see a recovery of US$53-82 (see here for the full scenario analysis). At an exit yield of 8%, we arrive at a probability-weighted valuation of US$91, roughly in line with current prices after their ongoing decline (falling 8% over the past three months). 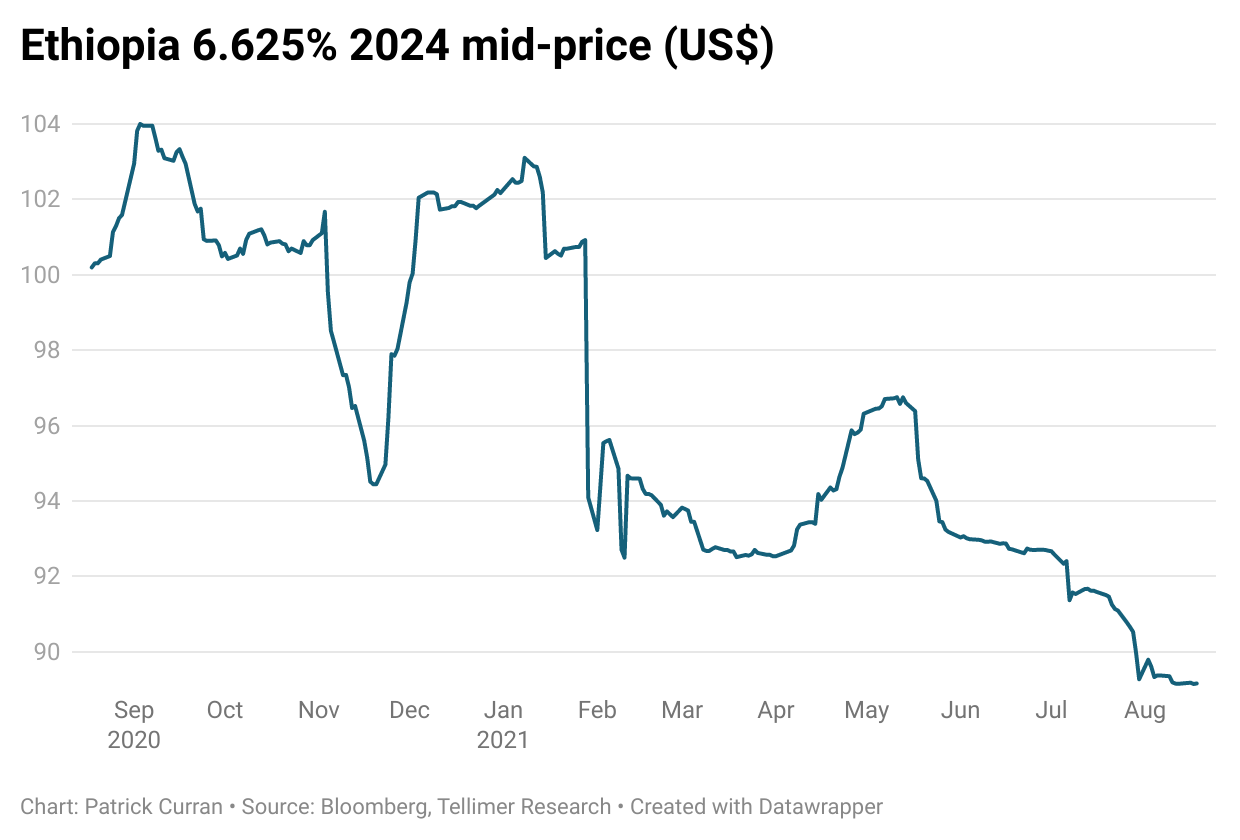 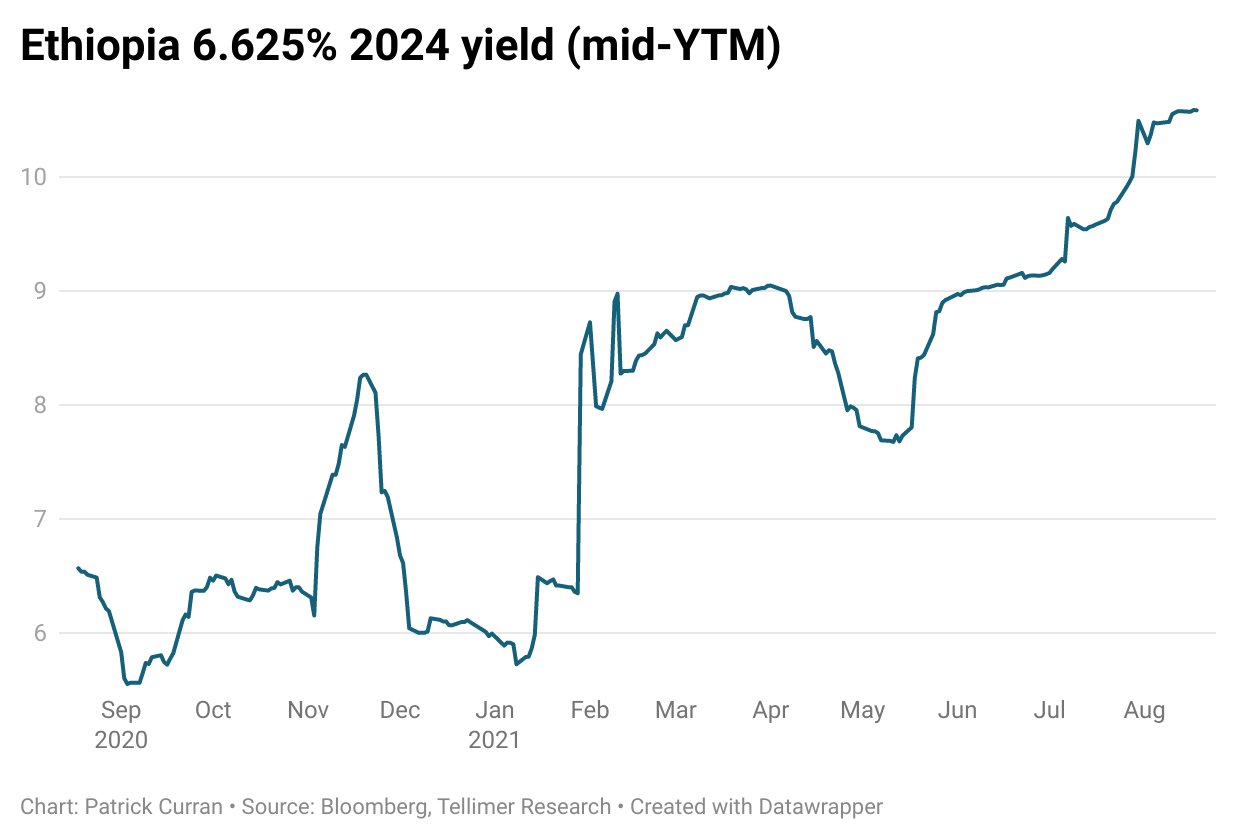 However, with the conflict threatening to engulf the country (undermining the economy and putting the stability of the government at risk) and the debt and IMF negotiations stuck in the mud (with the deadline for resolution looming just a month away), things will probably get worse before they get better. Regardless of whether the eurobond is included in the eventual restructuring, we think prices will likely continue to drop as the conflict worsens, and could drop significantly if the programme expires next month or if the US or other supporters withdraw funding and/or support for the programme.

Ethiopia: Conflicting reports on the state of the conflict, December 2020

Ethiopia on the brink of civil war, November 2020

Conversation with the National Bank of Ethiopia, October 2020