A US$33m coupon payment on Ethiopia’s 2024 eurobond due this Friday (11 June) will test Ethiopia’s commitment to upholding its obligations to private creditors while negotiating its Common Framework restructuring.

If the government pays, bondholder hopes for a restructuring without private sector involvement (PSI) will be kept alive (although it doesn’t guarantee bonds will subsequently be excluded). If it does not, it will be a clear signal that the private sector will not be exempt and could set the stage for contentious negotiations (bondholders will argue that they should have been approached for a consent solicitation, ie to defer payment pending the outcome of the restructuring, at least giving them the opportunity to voice their views rather than being taken by surprise). It will also have potential ramifications for other countries with eurobonds that go down the Common Framework route.

The market probably expects the coupon to be paid, with the bonds trading in the low 90s, especially as the government said, after announcing its intentions to seek a Common Framework treatment, that it would exclude the bonds, although the lack of communication over the government’s intentions vis-à-vis the coupon has added to the uncertainty. If it intends to pay, the government could have issued a press release in advance saying as much to defuse unnecessary speculation. Ethiopia’s 2024 eurobond has fallen c8pts since it announced its participation in the Common Framework on 29 January, with the Ethiopia EMBI constituent falling 5.6% in total-return terms over that period, versus a 0.4% fall for the EMBI Global index and a 2.8% rise for the EMBI Africa index. 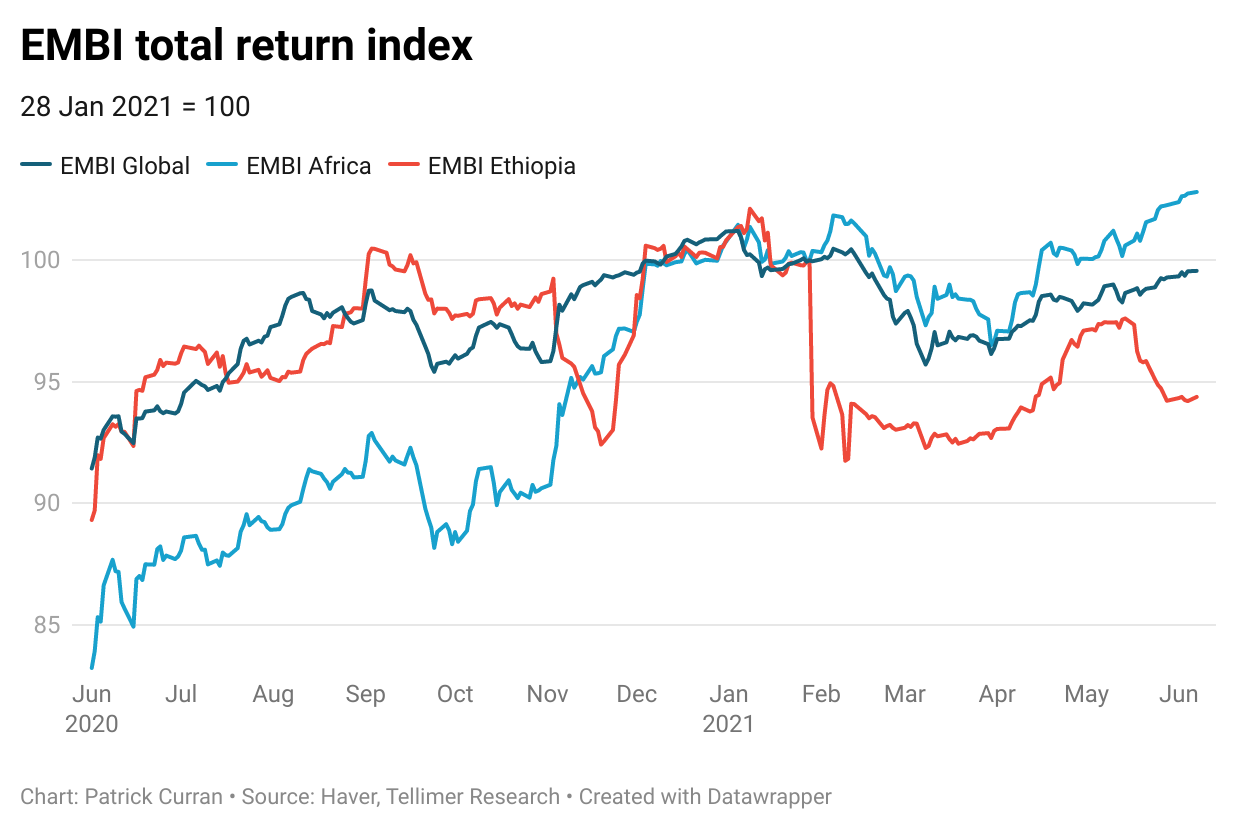 We recently conducted a debt sustainability analysis on Ethiopia, which did not signal a clear need for PSI, with Ethiopia’s lone eurobond making up just 4% of its public external debt stock, but it is possible that the need for “comparability of treatment” under the Common Framework necessitates PSI regardless. Ethiopia will be a key test case for the Common Framework, with Zambia having already defaulted before it announced its participation, Chad not having any commercially traded external debt, and no other countries yet having entered the framework.

If Ethiopia pays the coupon on Friday, it will likely provide support to its flagging eurobond. It could also provide a further boost to Zambia’s eurobonds, which have rallied c25pts (c60%) since October on the back of rising copper prices and hopes (which are misplaced, we think) of an imminent IMF program after the August elections. If PSI is still on the table for Ethiopia, then Zambian bondholders may hold out hope for a lighter treatment (although the starting point for Zambia is much bleaker, and with much higher levels of commercial debt).

But even if Ethiopia pays its coupon, it still has a long way to go. Sanctions related to the intensifying humanitarian crisis in Tigray (with an estimated 90% of the population now requiring emergency food aid, according to the UN) could complicate the restructuring and the first and second IMF programme reviews, with Board approval delayed after a staff-level agreement was reached in February. And while the recent telecom license auction is reason for hope (and, of more immediate importance, a US$850m license fee reportedly paid in full on 5 June), it fell flat compared with initial expectations in a clear sign of investor reluctance due to high levels of political and policy uncertainty (including a decision to exclude mobile money from the license, a key selling point for many investors).

Against this fraught political backdrop, Ethiopia will hold national elections on 21 June (originally scheduled for 5 June, after being postponed last year). The elections could serve as another flashpoint for violence in the embattled Tigray province, as well as other provinces like Oromia and Amhara that have experienced political unrest and violence over the past year, further denting Prime Minister Abiy Ahmed’s now irreversibly stained reputation, and potentially leading to more sanctions that could threaten needed international financing or at the very least distract from the restructuring process.

We maintain our Hold on Ethiopia’s 2024 eurobond at a price of US$93 (yield of 9%) on a mid-basis as of cob on 7 June on Bloomberg, pending greater visibility on the coupon payment and elections. 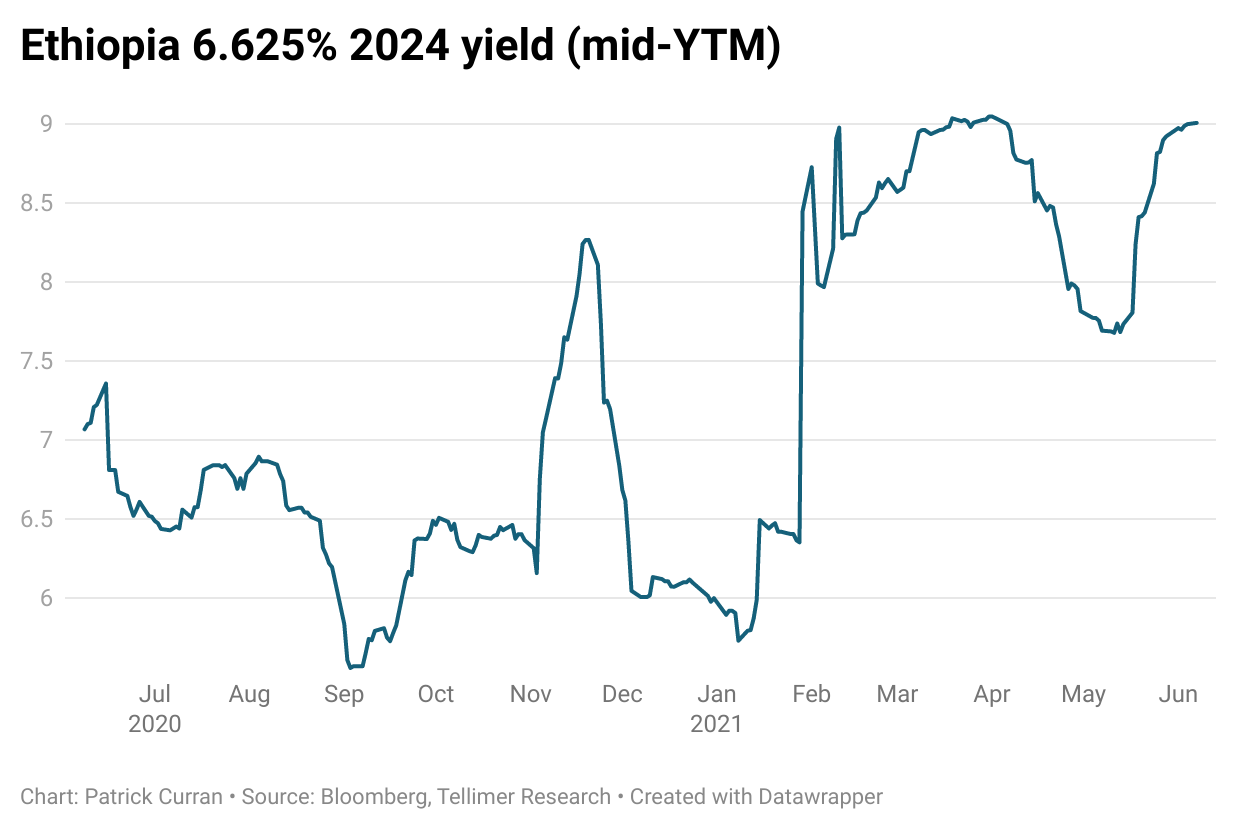 Safaricom in Ethiopia: Not as lucrative as the market believes, 30 May

Ethiopia: Conflicting reports on the state of the conflict, 2 December