Ethiopia: Conflicting reports on the state of the conflict

Conflicting claims from the federal government and the regional TPLF make it difficult to pinpoint what exactly has happened since the outbreak of violence in Tigray on 4 November, with the government claiming victory and the TPLF claiming that the fight continues.

Bonds initially sold off 210bps (7.1%) as the violence escalated, but have rallied over the past week as the government insists that the conflict has been brought under control and are now down only 40bps (1.4%) – although this took place against the backdrop of a c110bps rally in the EMBI Africa index. 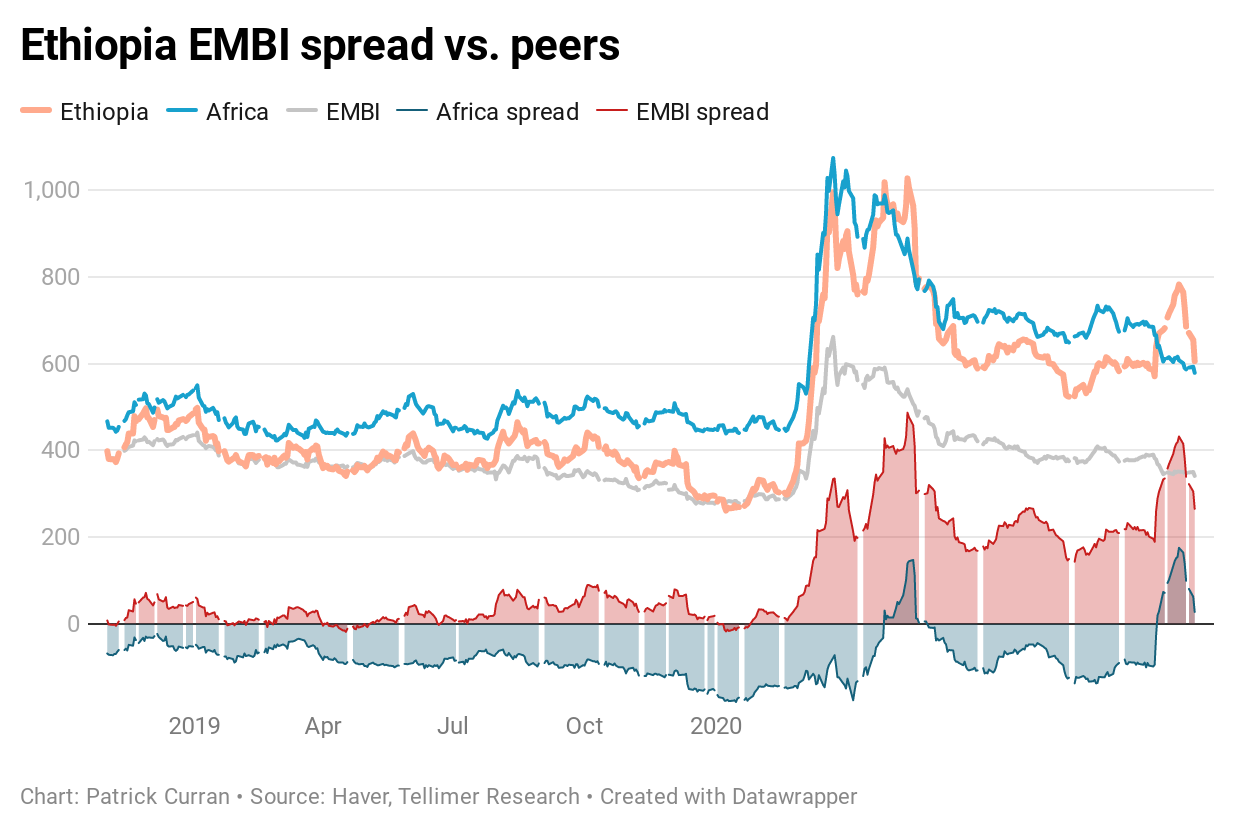 If the government’s claims turn out to be exaggerated and the conflict continues to simmer, or even escalate, then Ethiopia’s 2024 eurobond could be vulnerable to another bout of weakness. But, if the worst of the crisis has indeed passed, then it could continue to claw back some its underperformance.

We believe that Ethiopia’s recent underperformance is justified, but while risks are skewed to the downside, we still believe in Ethiopia’s strong fundamental story and retain our Hold recommendation.

Ethiopian Prime Minister Abiy Ahmed on Saturday announced that federal forces had conquered the Tigray capital of Mekele, effectively restoring federal control of the region less than a month after fighting began. He claims that this feat was accomplished without any harm to civilians or heritage sites.

However, TPLF leader Debretsion Gebremichael vowed to continue fighting, and claims to have regained control of Axum, a northern city the federal army captured a week ago. He says that fighting is continuing in other areas outside of Mekelle, and that the TPLF will regain control of all lost areas.

According to the UN, c2mn people in Tigray now need assistance (including nearly 100,000 Eritrean refugees in the region that have been caught up in the fighting) and 1mn people have been displaced (including more than 45,000 Ethiopians who have fled into Sudan as refugees). But, with communication channels still largely cut off in the region, it is nearly impossible to verify the veracity of the leaders’ claims or to quantify the toll of the violence.

The government doubled down on its claims of victory on Tuesday, saying that Keria Ibrahim, one of nine TPLF executives, had surrendered to federal forces. Prime Minister Abiy says that the government is turning its focus to the mid-2021 elections and is in the process of forming an interim government in the region. But, even if Abiy’s claim of victory turns out to be true, many experts warn that the conflict may continue to simmer as a guerrilla insurgency.

The genie of internal armed conflict is out of the bottle now and Tigrayan grievances (and frustration at the loss of the upper hand they enjoyed for decades) likely will not dissipate any time soon amid an escalating war of words that has seen the TPLF labelled “terrorists” and the government a “non-elected dictatorship”. This implies both ongoing internal risk and an avenue for Ethiopia’s regional rivals, eg Egypt, to exploit.

What people are saying

With so many unverified claims, below we outline some of the recent statements from key local and international players active in the region:

Ethiopia remains dependent on aid to fund its budget, with ETB36.8bn (cUS$960bn) of grants budgeted for fiscal year 2019/20 (c13% of total revenue). The US has already suspended aid due to Ethiopia’s dispute with Egypt and Sudan over the filling of the Grand Ethiopian Renaissance Dam, and, while US$90m of EU funding seems trivial, it could have a negative impact if it causes other donors to pull back too.

If the conflict continues to drag out, it could also delay some of Ethiopia’s ambitious reform plans. Most immediately, it has threatened the highly anticipated privatisation of Ethio Telecom. MTN has said that the investment case is “materially less attractive” due to the crisis but it remains interested, while Vodacom said that “political instability in the country continues to pose a major risk” and is monitoring the conflict closely before making its final decision.

Eyob Tekalign, the minister responsible for privatisation, says that the process remains on track and that “there is nothing of concern at all” regarding the conflict and its impact on the process. But, beyond the conflict, Safaricom has expressed concern that the terms of the auction and the regulatory framework haven’t been formally disclosed and said that it could only submit an offer once more clarity was provided.

Tekalign hopes to finalise the process in February 2021, but further delays cannot be ruled out. This would be seen as a negative signpost for the government’s ability to deliver on its reform promises, including future privatisation plans such as the auction of factories and land owned by Ethiopian Sugar Corp (which is probably next in line).

Regardless, the conflict has put an abrupt end to Abiy’s honeymoon period just over a year after he was awarded the Nobel Peace Prize. Markets may be less keen to give his government the benefit of the doubt on reforms, and will likely continue to bake in an added political risk premium even if the conflict is ended.

The key question is how big that premium will be. Bonds are now trading above par, and spreads are only c40bps wide of the pre-conflict level. Although this seems like a low premium, Ethiopian eurobonds have underperformed their African peers by 150bps since the conflict began and many countries have seen bonds perform well in the past even in the face of regional conflict (including Nigeria, Sri Lanka and Iraq).

Ethiopia’s eurobond is still trading c230bps wide of the two-year pre-Covid average and c345bps wide of the pre-Covid low. Although it is possible that spreads could continue to contract towards the pre-Covid average in the event of a continued EM rally, they are unlikely to completely close the gap and a rally beyond that level is probably out of the question after this month’s conflict.

That said, we think the fundamental outlook for Ethiopia remains favourable, and willingness to pay remains high. In the IMF’s May staff report, the Fund projected mid-year reserves at nearly US$3.1bn, which is only 1.9 months of imports. However, Ethiopia’s lone US$1bn eurobond does not mature until December 2024 and has annual interest of just US$66mn, leaving plenty of runway to think about refinancing.

With significant borrowing from China (Johns Hopkins SAIS-CARI estimates disbursements totalling US$14.1bn from 2006-19, second to Angola in Sub-Saharan Africa), Ethiopia’s external maturity profile extends beyond its eurobond obligations. The World Bank estimates nearly US$2.4bn of external debt service due between now and the end of 2021 (including nearly US$1.1bn to China).

That said, Ethiopia has already received debt relief under the G20’s debt service suspension initiative (DSSI) and, evidently, has not sought comparability of treatment on commercial debt, indicating a strong willingness to pay. With cUS$760m of official bilateral payments due between now and the end of 2021, this could result in significant savings if DSSI is extended through the end of next year.

Ethiopia’s next commercial coupon payment of US$33m is due next Friday, 11 December, which we assume will be paid and will be a further indication of Ethiopia’s willingness to pay. Although we do not think that default is imminent for Ethiopia, if donors pull funding and Ethiopia is unable to access the market to roll over its obligations, that picture could change (although its existing ECF-EFF arrangement with the IMF will provide a backstop over the next two years).

Ethiopia’s eurobond likely will (and should) trade at weaker levels post-conflict, but we retain our Hold recommendation.