ESG needs to focus on countries, not just companies

So many assets have been raised under the banner of "Environment, Social, and Governance" (ESG) with varying degrees of sincerity, as demonstrated by the SEC investigation that was opened into Deutsche Bank's asset management arm DWS in August.

Generally, ESG criteria are applied at the company level. If we are going to bring morality into an investment discussion, surely a more important question is whether the country in which companies operate, or investors deploy capital, meets ESG criteria.

The Environmental part of ESG appears the simplest: consider metrics such as greenhouse gas emissions, energy intensity, and freshwater use. The interpretation of this data is still highly controversial: should one adjust on: 1) a per capita basis, which would make China look much less of an offender than is portrayed by the US; 2) an income per capita basis, allowing less developed countries more leeway; or 3) an inherited natural resource basis, giving greater allowance for countries in chronically arid habitats like the Middle East.

On the Social and Governance parts of ESG, the majority of institutional funds dodge questions related to illicit financial flows, corruption, internet freedom, media freedom, inequality, and child labour. Some of the reports I have published on these topics are among the least read by an audience that generally prefers the focus to remain on valuation, performance, near-term economic outlook, and funds flows.

I am in no position to preach, because I cannot convince myself that a moral standard can be universally defined and objectively measured. But for those who do market themselves as ESG-compliant, I always feel there is a wood being missed for the trees because almost all of the analysis takes place at the company, not the country, layer.

When it comes to countries, the discussion of the Social and Governance aspects of ESG are emotionally charged topics. Pretty quickly, ideals that are held up as universal, eg "human rights", start losing their meaning, or, at least, their intuitive simplicity, when one is forced to reconcile the different components of those rights, ie liberty versus entitlement, or mesh whatever definition or standard one settles on with cultural, religious and historic context.

For those still wishing to stir up this hornet's nest and emerge with some useable data, they could do worse than rummage around the Worldwide Governance Indicators (WGI) from the World Bank, the latest version of which was released on 24 September.

While every component of WGI is open to debate, in terms of whether it is a valid measure and whether it is given an appropriate weight, it is at least an annual time series, going back to 2002, and biennially back to 1996, covering every country of potential interest. I hope for those fund managers who embrace WGI that it does not end up suffering the scandalous fate of the Ease of Doing Business data set.

WGI aggregates a myriad of indices and surveys covering six aspects of Governance and Social, calculating scores in a range of minus 2.5 (indicating a very weak score) to positive 2.5 (very strong):

As with most ESG analysis, there are two ways to use the available data: the latest snapshot and the trend of improvement or decline over a historic time frame.

The following countries screen well using the change exhibited over the past decade, weighting the change in the six aggregate metrics equally:

Our curated version of WGI, with adjustable weights for those who consider, for example, individual freedom to be more important than quality of private-sector regulation, is available in Excel via this link. 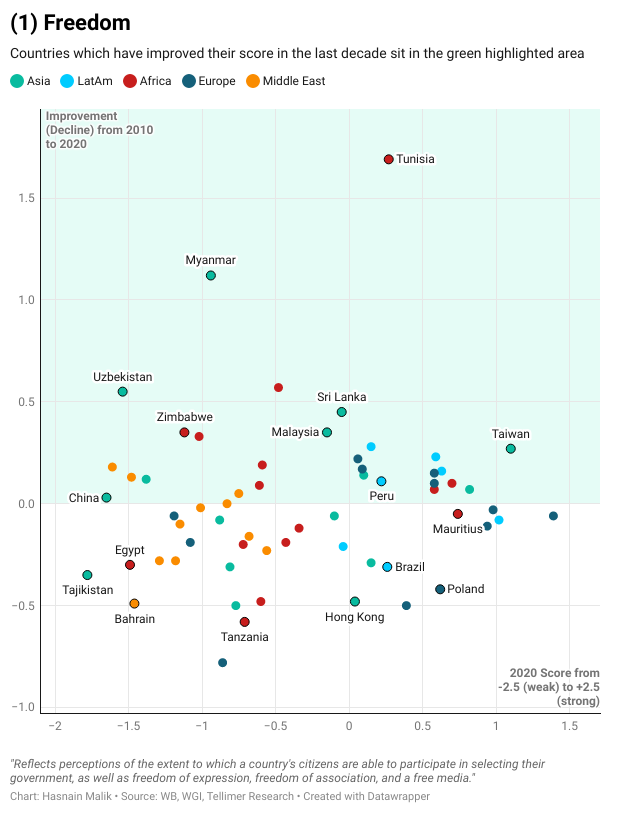 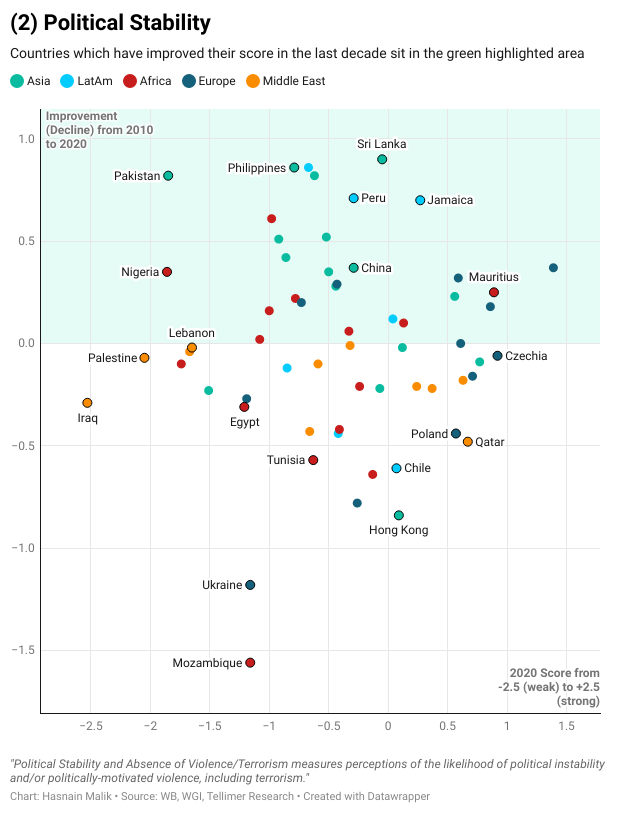 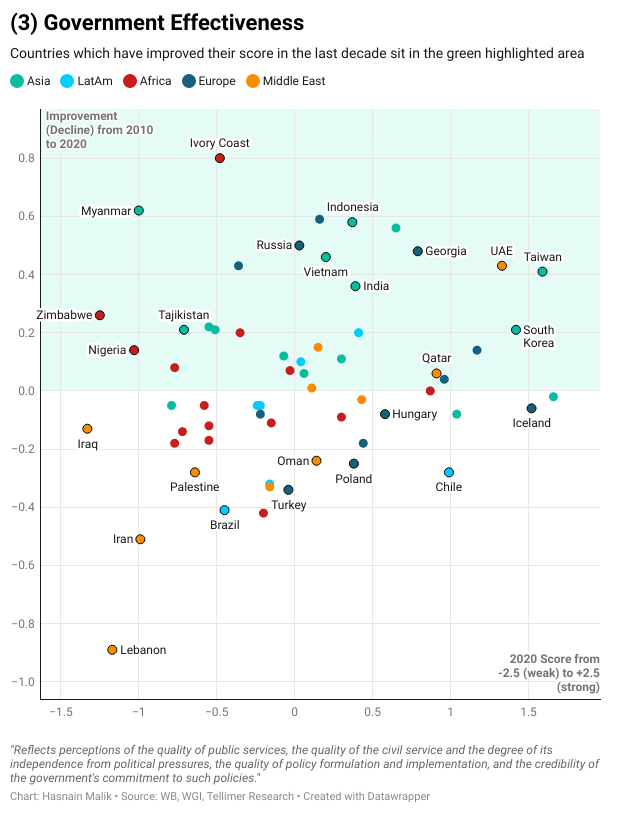 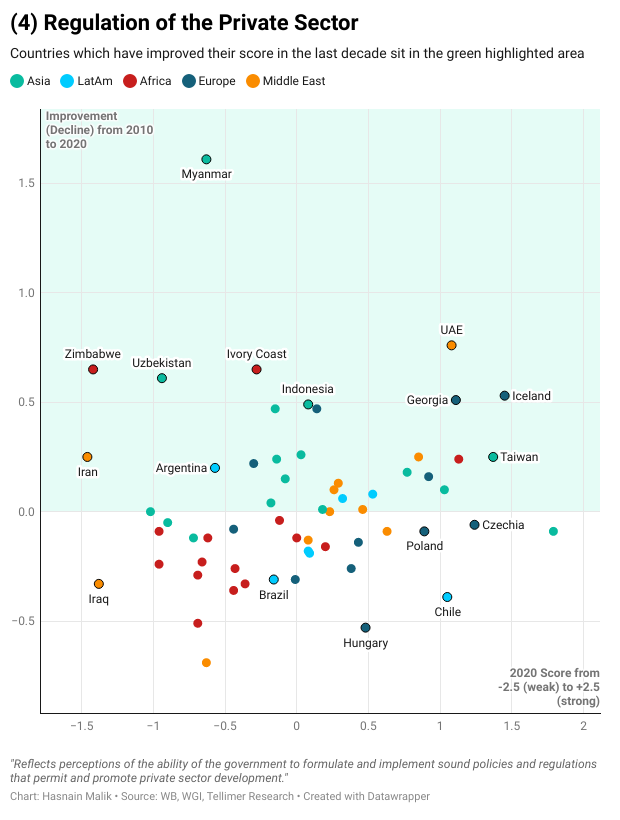 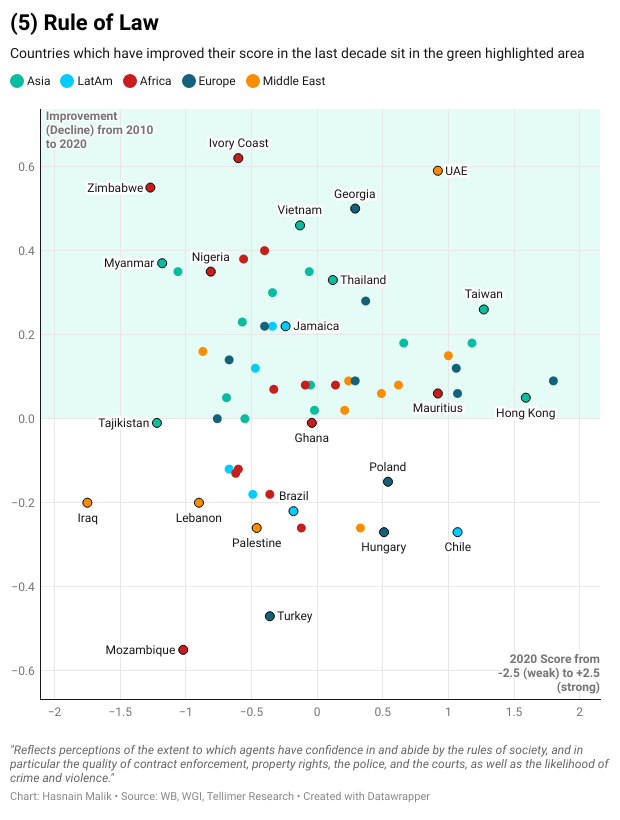 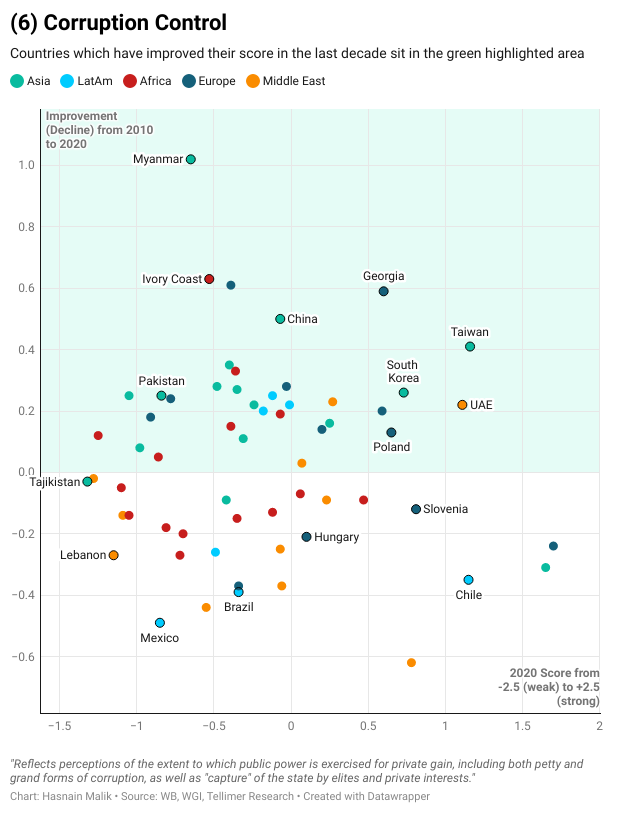