In April 2019, in the pre-Covid era when investors would meet companies in person, we took the management of Golden Agri on a roadshow to Europe. Golden Agri is Indonesia's largest palm oil producer and has 536,877 hectares of land as of June 2021. This is eight times the land mass of Singapore.

Golden Agri seemed like a compelling story. Most of its earnings were derived from palm oil prices, while its vast hectarage was in the most fertile areas of Indonesia.

Palm oil prices were set to rise. Palm oil is the cheapest form of cooking oil and is a vital component of the diets of China, India and the EU.

Apart from its application in cooking oil, palm oil had an additional price catalyst – its use as a fuel. Palm oil is used as a source of biodiesel – a cheaper alternative to traditional fuels. Rising crude oil prices made alternative fuels – and hence palm oil – more attactive. Furthermore, the palm oil quotient in Indonesia diesel was set to be raised by 2.5 times in 2019.

Despite the rosy picture for Golden Agri and for palm oil more generally, we struggled to get meetings. It was not due to the company's financial prospects, but because of the dark cloud of ESG issues.

Many fund managers could not even meet a palm oil producer (let alone invest in it). Their concern was that palm oil production was devastating the natural rainforests of Southeast Asia.

NGOs like the World Wide Fund for Nature (WWF) had launched a campaign for a boycott of palm oil and its applications like cooking oil and sweets. The NGOs claimed that the palm oil producers were damaging the livelihood of species including the Orangutans.

The environmental NGOs have pressured processed consumers into boycotting palm oil. Europe is at the centre of the campaign and there is a move to get the EU to restrict imports.

Back to the present, and palm oil prices are up 16% in 2021, rallying alongside many other commodities in the post-Covid boom. Palm oil traditionally has a strong correlation with crude oil and displays a correlation coefficient of 65% over the past 15 years. 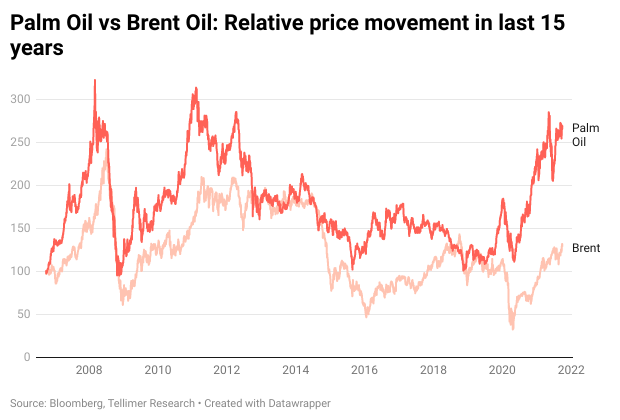 But unlike the crude oil and metal producers, the stocks of palm oil producers (like Golden Agri) have been flat in this rally. Fund managers are averse to investing in an industry that is said to violate ESG principles. 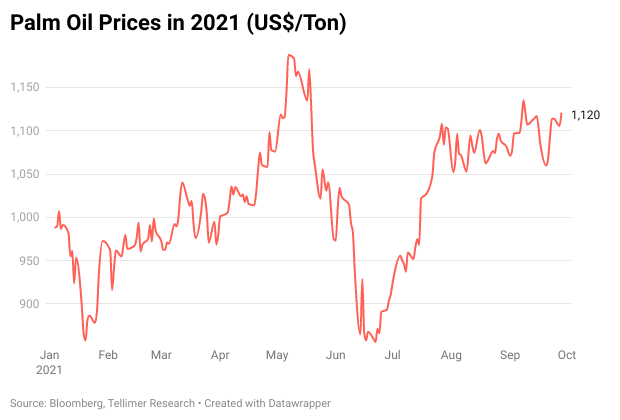 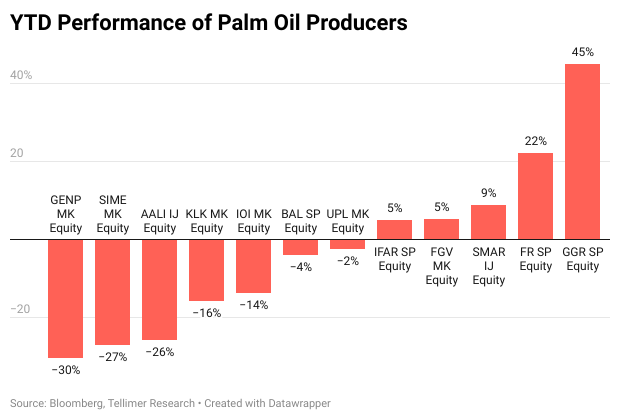 Our view is that we cannot expect a rally in the palm oil plantation stocks until there is clarity on the ESG issues.

In our upcoming research we will assess the ESG issues in the palm oil industry and discuss the extent to which the biggest companies have adopted sustainability standards.