Emerging markets dominate foreign lobbying in the US

Emerging markets dominate the list of the largest foreign spenders on registered US lobbying activity. China (including Hong Kong) and South Korea in Asia, Qatar, Saudi, and UAE in the GCC, and Russia among the 10 biggest foreign lobbyists, in terms of cumulative spend since January 2016. 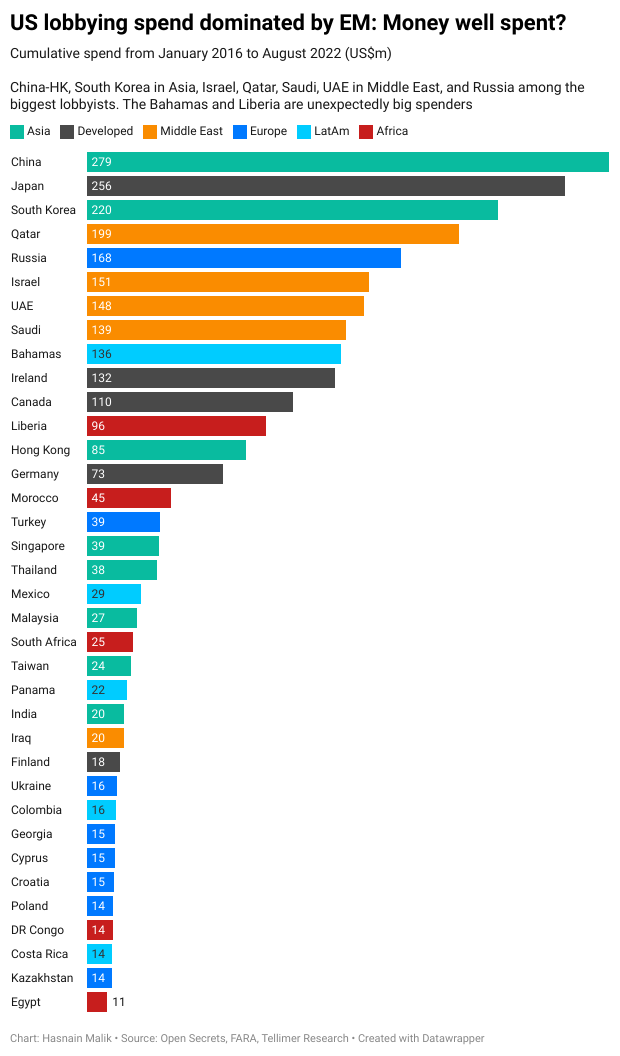 In terms of whether this was money well spent, it is hard to disentangle the direction that long-running geopolitical interests drive US foreign policy from the direction it is pushed by foreign countries via their lobbying efforts.

The strategic competition of the US with China over territory, trade and technology is inevitable regardless of whether a Trump or a Biden occupies the US Presidency, the Democrats or Republicans dominate Congress or how much the Chinese spend on promoting their interests in the US. The same might be said of US opposition to Russia's efforts to expand its influence and control in countries along its periphery.

China has spent over 10 times more than Taiwan on US lobbying but this has not prevented the increasing diplomatic and trade interaction of the US with Taiwan, coming to a head most recently with Nancy Pelosi's visit to Taiwan, the Chips and Science Act – which limits capacity upgrade and expansion in China of any company, eg TSMC, in receipt of US federal funding – and the imminent start of official US-Taiwan trade negotiations.

Russia has spent over twice the combined amount of Finland, Georgia, Kazakhstan, Poland and Ukraine but the speed with which the US reacted with sanctions on Russia and arms supply to Ukraine might imply that no amount of Russian lobbying was going to dissuade the US from opposing its military invasion of Ukraine.

Perhaps it is more pertinent to ask if US relations with China (or Russia) might have deteriorated even more in recent years without these lobbying efforts?

Elsewhere, the returns on US lobbying spend appear mixed.

Emerging market countries with high spend on US lobbying relative to the size of their economy include Croatia, Cyprus and Georgia in Europe, Liberia, Morocco and Somalia in Africa, Qatar and the UAE in the Middle East, the Bahamas, Costa Rica, Honduras and Panama in LatAm-Caribbean. 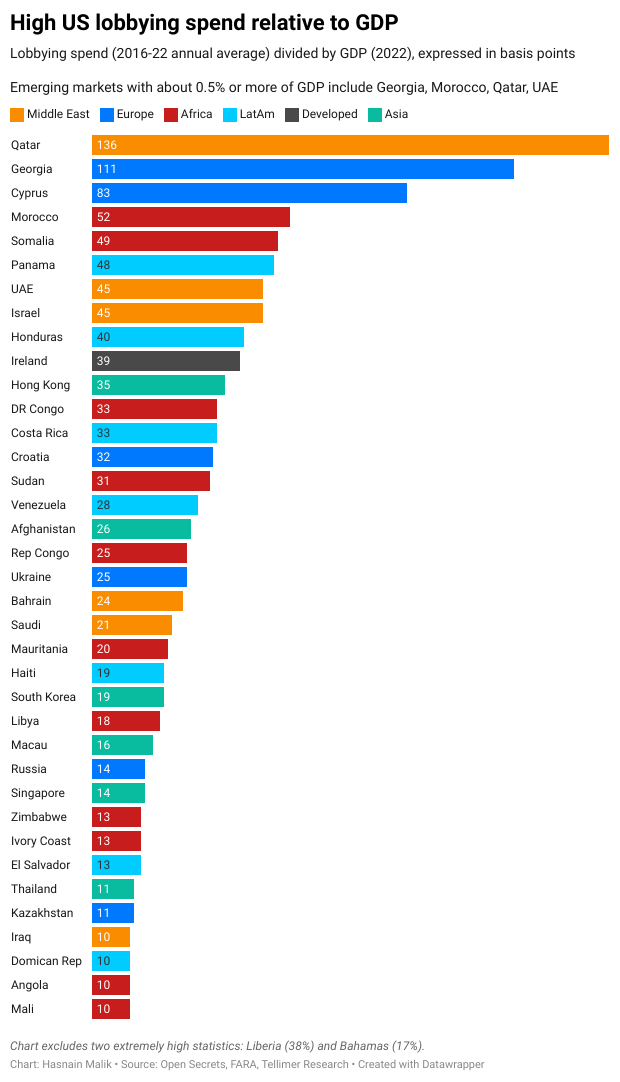 Shift to financial over military tools in US foreign policy gives Congress an even greater influence, making it an even bigger target for foreign lobbying

Nancy Pelosi's Taiwan trip, against the wishes of President Biden, is not the first instance of the US Congress contravening the President and triggering an escalation of tension with China over Taiwan.

After President Carter terminated US diplomatic recognition of Taiwan in 1979, in order to prioritise cultivating relations with China, the US Congress passed the Taiwan Relations Act, which institutionalised the supply of military hardware to Taiwan – while maintaining "strategic ambiguity".

And it was the US Congress that effectively enabled the visit of Taiwan President Lee Teng-hui and triggered the Third Taiwan Strait Crisis in 1995.

The responsibility for US foreign policy is shared by the President and by Congress. The US constitution segments some responsibilities but in a way that almost encourages overlap (or checks and balances).

Therefore, coherent and consistent foreign policy, particularly outside moments of emergency, requires a common view between the President and Congress.

Differences in electorate and electoral cycles, as well as party affiliation and personal ideology, continuously leads to conflicting messages and policy.

If Congress is unwilling to ratify an international agreement signed by a President then it remains merely an executive agreement that can be revoked, in short order, by a successor President.

Three recent examples, with far-reaching consequences for emerging markets, include the Iran Nuclear Deal, Paris Climate Agreement and Trans-Pacific Partnership (trade deal) signed by President Obama, in 2015-16 – all were revoked by President Trump.

Furthermore, the increasing use of sanctions as the stick in US foreign policy, as opposed to military muscle, following the domestically unpopular Iraq and Afghan Wars, arguably increases the influence of Congress to the detriment of that of the President.

In the case of the Iran Nuclear Deal, the sanctions block applied by Congress on developing commercial ties with Iran undermined the Deal even more than its non-ratification.

The result of this internal competition over (or checks and balances in) US foreign policy and the shift in emphasis from military to financial tools means that foreign governments, perhaps, particularly those with much more authoritarian political systems, find the rhetoric and commitments made by US presidents as lacking in credibility.

Sooner or later, they will be voted out or reach their term limit and any agreement they sign can be undermined in practical financial terms by Congress. So, why not concentrate efforts to win over hearts and minds in Congress?

Tracking foreign lobbying activity in the US

FARA refers to the Foreign Agents Registration Act, under which US-based agents, acting on behalf of foreign principals to lobby (ie influence opinion and policy formation in the US), are required to file reports every six months with the Department of Justice.

Open Secrets, which describes itself as a "nonpartisan, independent, and nonprofit" researcher on money flows in US politics, has tracked over US$3.6bn, sourced from almost a thousand foreign principals, over the six and half years since January 2016.

Nevertheless, this cumulative figure is less than the US$3.8bn spent by all domestic lobbying at the federal level in 2021 alone.

In comparison, in 2021, the top three individual foreign country spenders on US lobbying were China (US$84mn) and six countries spent between US$31mn and US$47mn – Qatar, Japan, Russia, South Korea and and the UAE.