EM hard currency sovereign bond issuance dropped to US$8.2bn in July, a fall of 60% compared to June, bringing total issuance YTD to US$131.7bn, based on our calculations using data from Bond Radar. 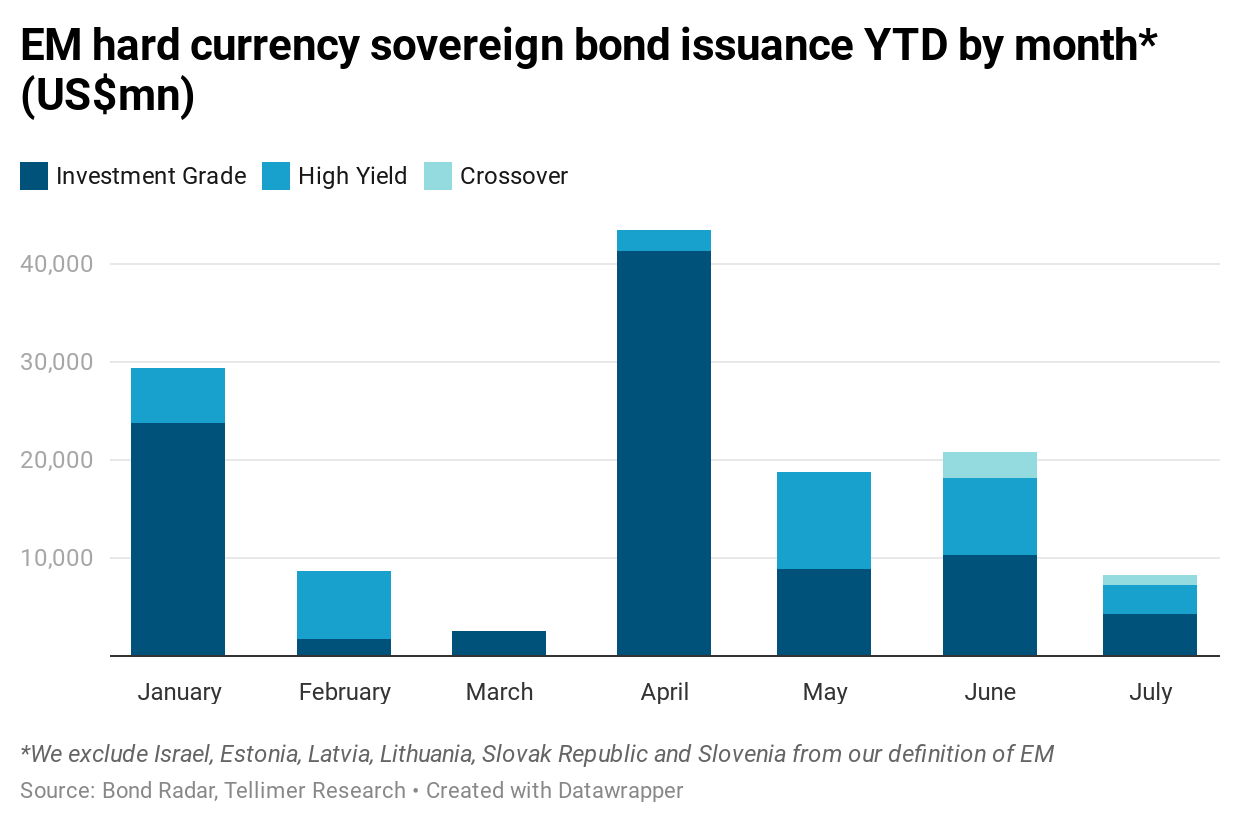 The pause in issuance may reflect the seasonal summer lull and associated weakening in market liquidity, while risk appetite may also have eased a little as concerns over the pandemic, and a second wave, resurfaced. The EMBIGD spread declined by just 34bps on the month, its lowest monthly decline since May, as the EM bond rally matures. Still, with relatively favourable spreads (440bps end-July), large funding needs, and a myriad of risks on the horizon (see our outlook for H2), some sovereign debt managers may also want to take advantage of current conditions to issue while they can.

Within overall issuance in July, Investment Grade (IG) was US$4.2bn (51% of the total) and High Yield (HY) was US$3.0bn (36%). Crossover issuance of US$1.0bn (12%) accounted for the remainder. While the absolute amounts for each segment were much lower than in June, their respective shares of the total were broadly unchanged over the two months. For the year so far, 70% of issuance has been IG and just over a quarter (27%) has been HY, with crossover amounting to 3%.

Within HY, there were just two issuers in July, El Salvador (B3/B-/B-) and Ukraine (B3/B/B), which means that 13 different HY countries have come to the market since access resumed in April (excluding crossover). It also continues to demonstrate access exists for some countries lower down the rating scale, with B- rated El Salvador becoming the lowest rated issuer so far (probably this year too). El Salvador issued a 32-year bond (2052 maturity) albeit at 9.5%, which makes it the highest coupon at issue this year, ahead of Egypt's own 30-year in May at 8.875% and Ghana's 40-year at 8.75% (priced to yield 8.875%) pre-Covid in February, while Ukraine shrugged off concerns over central bank independence by completing its abandoned US$2bn 12-year issue at 7.25%. Sharjah (Ba2/BBB/-) in the UAE was the crossover issue.

We calculate HY issuance YTD now stands at US$35bn, with 65% of this issued since April. But, as we noted before, access has still been limited since the market reopened and the number of issuers seems a remarkably low subset of the number of possible HY, and frontier, issuers. And we still haven't seen any issuance from Sub-Saharan Africa, perhaps as DSSI continues to cast its shadow (see here).