Sovereign bond issuance in emerging markets continued to pick up last month after a slow period following the market volatility caused by the sell-off and volatility in US bonds and fears of a repeat of the Taper Tantrum. US 10-year bond yields fell 11bps on the month to 1.63%, after rising 83bps in Q1.

EM hard currency sovereign bond issuance was US$16.0bn in April, based on our calculations using data from Bond Radar, a 10% rise on March, which itself was a 41% rise on February, and only 10% below the monthly average since January 2020. Yet, issuance was still 57% down on a record-breaking January, which marked the strongest start to the year since the GFC.

Year-to-date, issuance amounted to US$78.1bn. However, despite the bumper January, issuance is still 6% below the same period last year even after we lost nearly two months, as a surge in issuance in April 2020 following the market reopening made up for the fall-off in activity in February and March due to the pandemic.

Investment Grade (IG) accounted for most of issuance however in April as higher grade credits led the recovery in the primary market. IG issuance rose 74% from March to US$14.2bn, and accounted for 88.5% of the total, while High Yield (HY) fell 71% to US$1.8bn, accounting for 11.5% of the total. So far this year, IG accounts for 61% of issuance, with HY accounting for 36% and crossover 3%.

Interestingly, year-to-date, HY issuance is virtually double what it was in the same period of 2020 (bearing in mind we lost nearly two months back then), while IG is 30% below.

HY issuance in April was the lowest value since August 2020 and came from just three countries – Georgia, Maldives, Ukraine (we exclude the EUR300mn issuance from the Republic of Srpska, a regional entity of Bosnia and Herzegovina). Moreover, most of this issuance came late in the month.

Ukraine (B3/B/B) was the surprise of the month, with a new US$1.25bn eight year bond (2029) at 6.875%. Amid large funding needs, Kiev was able to take advantage of the easing in tensions with Russia after Russia announced the pull-back of its troops from the Ukraine border, but it still comes at a time when the IMF's first programme review remains stalled. Ukraine's issuance was its first market appearance since its tap of the 2033s in December. Georgia (Ba2/BB/BB) returned to the market for the first time in a decade, refinancing the maturity of its April 2021 (issued in 2011) with a new US$500mn five year bond (2.75% 2026) priced to yield 2.875%. Maldives (B3/-/-) launched a US$100mn tap of its recent US$200mn 2026 bond, which was issued in March. 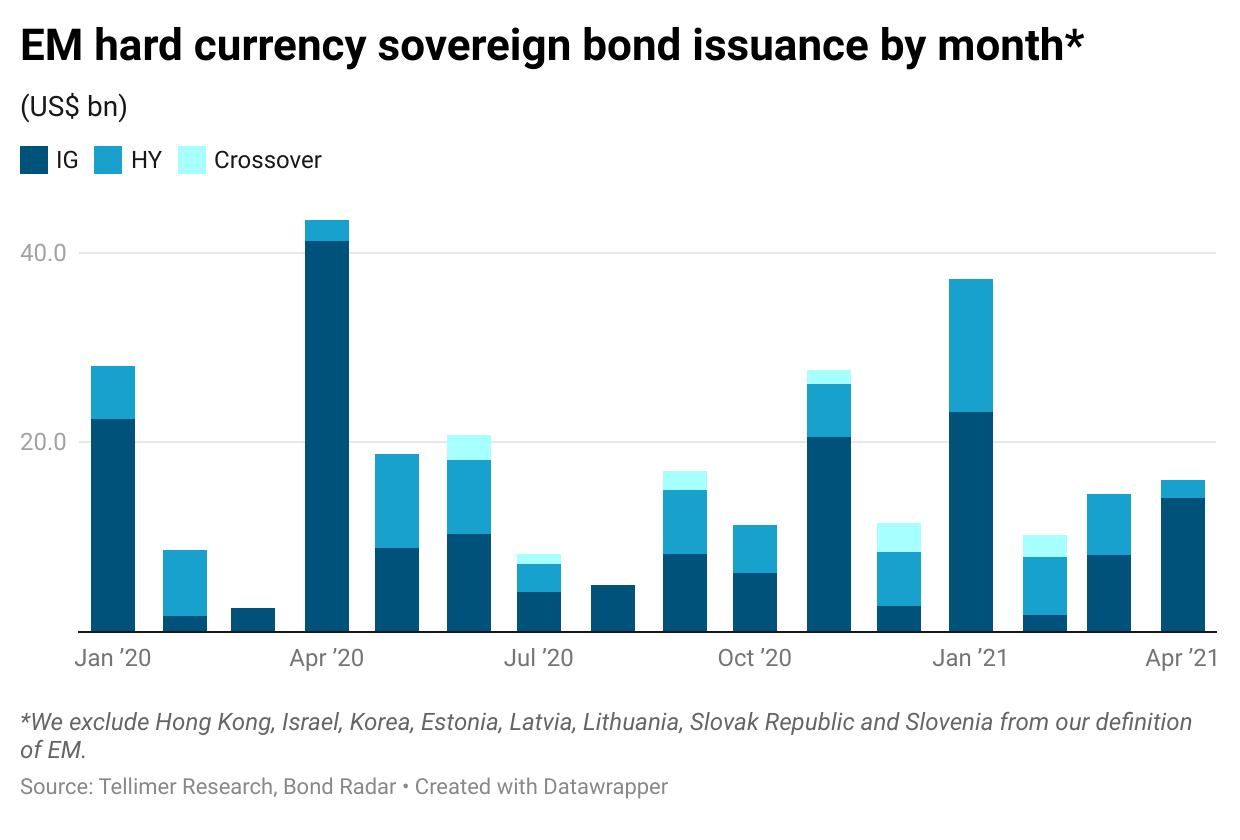 The performance of EM bonds was also stronger in April, with the first month of a positive return this year (as measured by the total return of the EMBIGD). The total return for the index was 2.2%, although that still leaves a negative total return YTD (-2.4%). The EMBIGD spread narrowed 15bps on the month to 339bps, with a 13bps decline this year so far.

Performance in April was led by HY and distressed. Ecuador was the best performer with a 44% return after a post-election bounce, although we were more cautious, followed by Lebanon (9%), Angola (8%), Tunisia, Sri Lanka, and Zambia (all 7%), El Salvador (6%) and Costa Rica (5%).