The theory that output per capita tends to grow faster in poorer economies than in richer ones, leading to a convergence in per capita incomes over time, has enjoyed widespread currency in the literature on economic development in recent decades. As advanced economies are close to the technological frontier, the theory of “convergence” states that they have a limited ability to increase growth by adopting new productivity-enhancing technology, limiting economic growth to the rate of growth for the population and capital stock. Further, diminishing returns to capital imply a higher return on investment in physical and human capital in developing economies.

As such, developing countries can “catch up” by adopting existing technologies to move towards the technological frontier​ and achieve productivity increases. Indeed, after the “lost decade” of the 1980s, the GDP-weighted per capita income in emerging markets has nearly doubled relative to advanced economies, rising from 12.1% at the end of the 1980s to a projected 22.6% in 2022. However, EM convergence has been driven by emerging Asia and Europe, which closed the per capita income gap by 17pp and 15.6pp, respectively, over that period, while the gap has actually widened by 4pp, 1.7pp and 1.5pp, respectively, in Latin American, Sub-Saharan Africa and the Middle East. 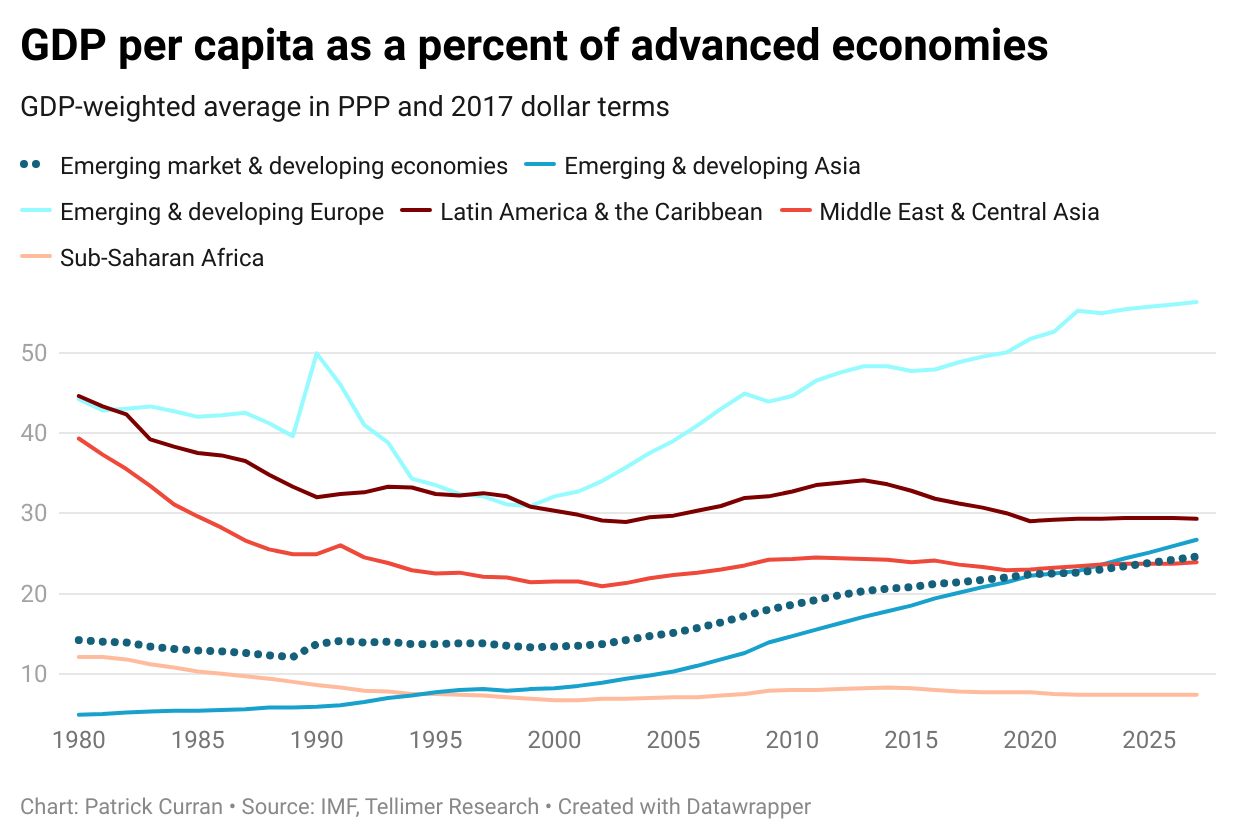 This lends credence to the “club convergence” theory, whereby convergence is conditional on certain factors being in place. Differentiating factors in the literature include the level and quality of and degree of investment in physical and human capital, the strength of institutions and degree of corruption, disparities in the saving rate and demographic factors such as fertility levels, and the degree of trade openness, among other things. More favourable conditions for growth in emerging Asia and Europe, it would follow, can explain their more robust progress closing the per capita income gap relative to their peers in Latin America, the Middle East and Africa. 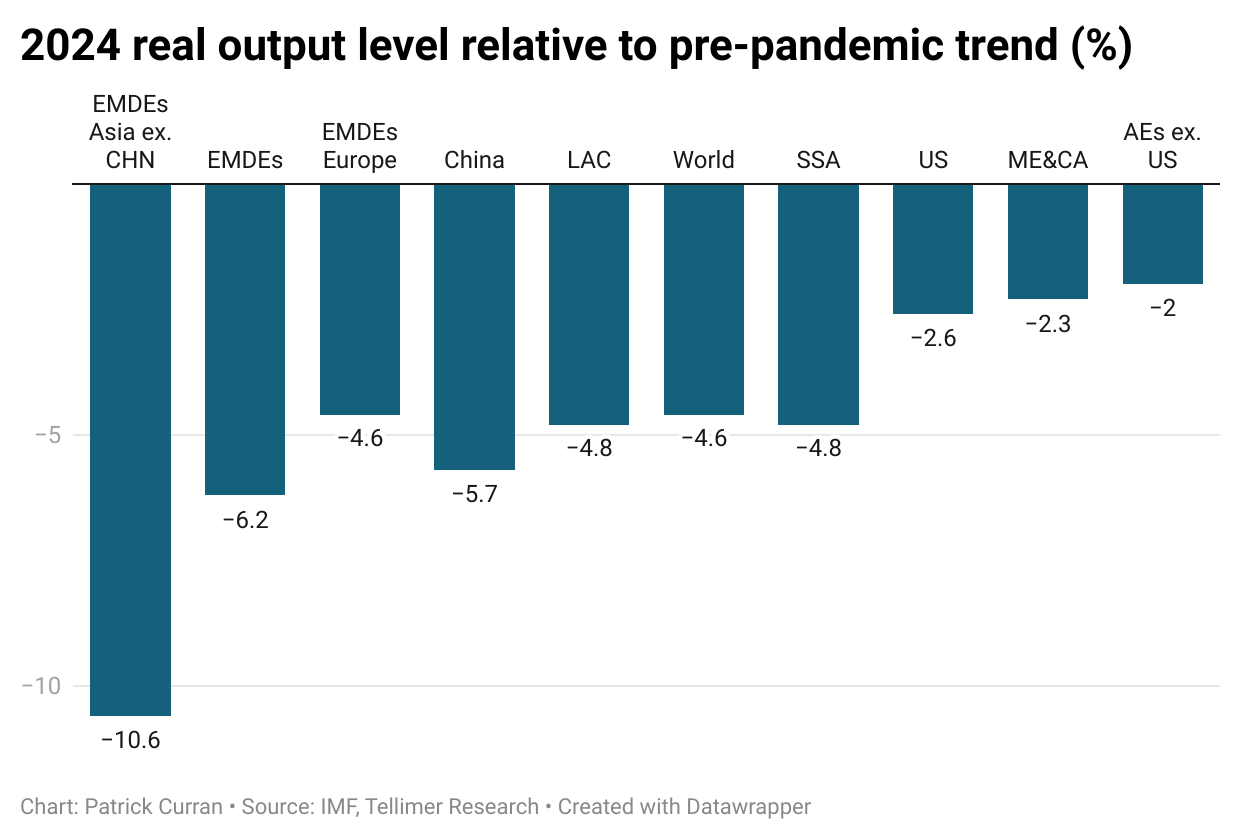 While this will slow the pace of income convergence compared to pre-pandemic projections, it does not undermine it. Using GDP per capita projections from the October 2022 IMF WEO, emerging markets are projected to close the per capita income gap by another 1.9pp from 2022 to 2027 (ie 0.4pp per year, in line with the 2010-19 average). Once again, however, emerging Asia and Europe are leading the charge, with income differentials narrowing by 3.8pp in Asia and 1.1pp in Europe, while it is expected to narrow by just 0.5pp in the Middle East and to remain stagnant in Latin America and Sub-Saharan Africa. Based on these projections, the IMF seems to be calling for a continuation of the “club convergence” story.

Looking at it from a slightly different angle, emerging markets are projected to record annual per capita income growth of 3.1% from 2023-27, well above the levels seen in the 1980s and 1990s but below the exceptionally strong growth of the 2000s and the steady growth of the 2010s. But while annual per capita growth over this period will be strongest in Asia (4.6%) and Europe (1.8%), for both regions it will be slower than it was in the decade before the pandemic. But while per capita growth will be relatively slower in the Middle East (1.8%), Sub-Saharan Africa (1.5%) and Latin America (1.4%), for these regions it still represents an improvement compared to the 2010s, giving some reason for optimism. 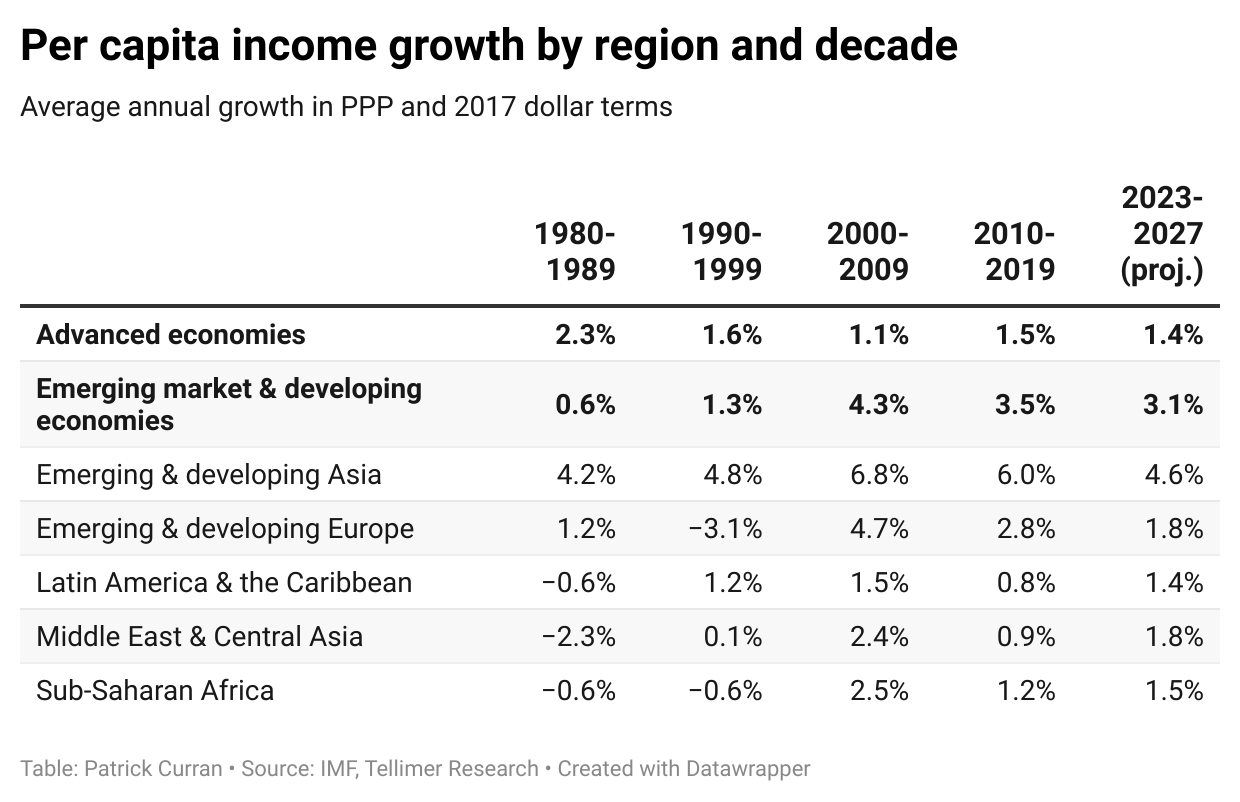 Taking the IMF’s forecasts at face value, per capita income growth is projected to be slower over the next five years than it was in the boom years from 2000 to 2019, and will continue to be contained to emerging Asia and Europe while the Middle East and, especially, Latin America and Sub-Saharan Africa continue to lag. But while these regions are not expected to reach the thresholds needed to join the “convergence club”, they are projected to do just enough to avoid losing further ground (like they have over the past four decades).

Overall, the pandemic has delayed but not derailed income convergence between emerging and advanced economies. The ratio of emerging to advanced economy per capita income in 2027 from the latest WEO will be 2.7pp below where it was expected to be in 2024 in the last pre-pandemic WEO, which means that EM income convergence has been set back by a decade if you extrapolate the projected 2023-27 pace of convergence forward. This holds across all regions except Europe, with the biggest downward revisions in Asia followed by the Middle East, Latin America and Africa. 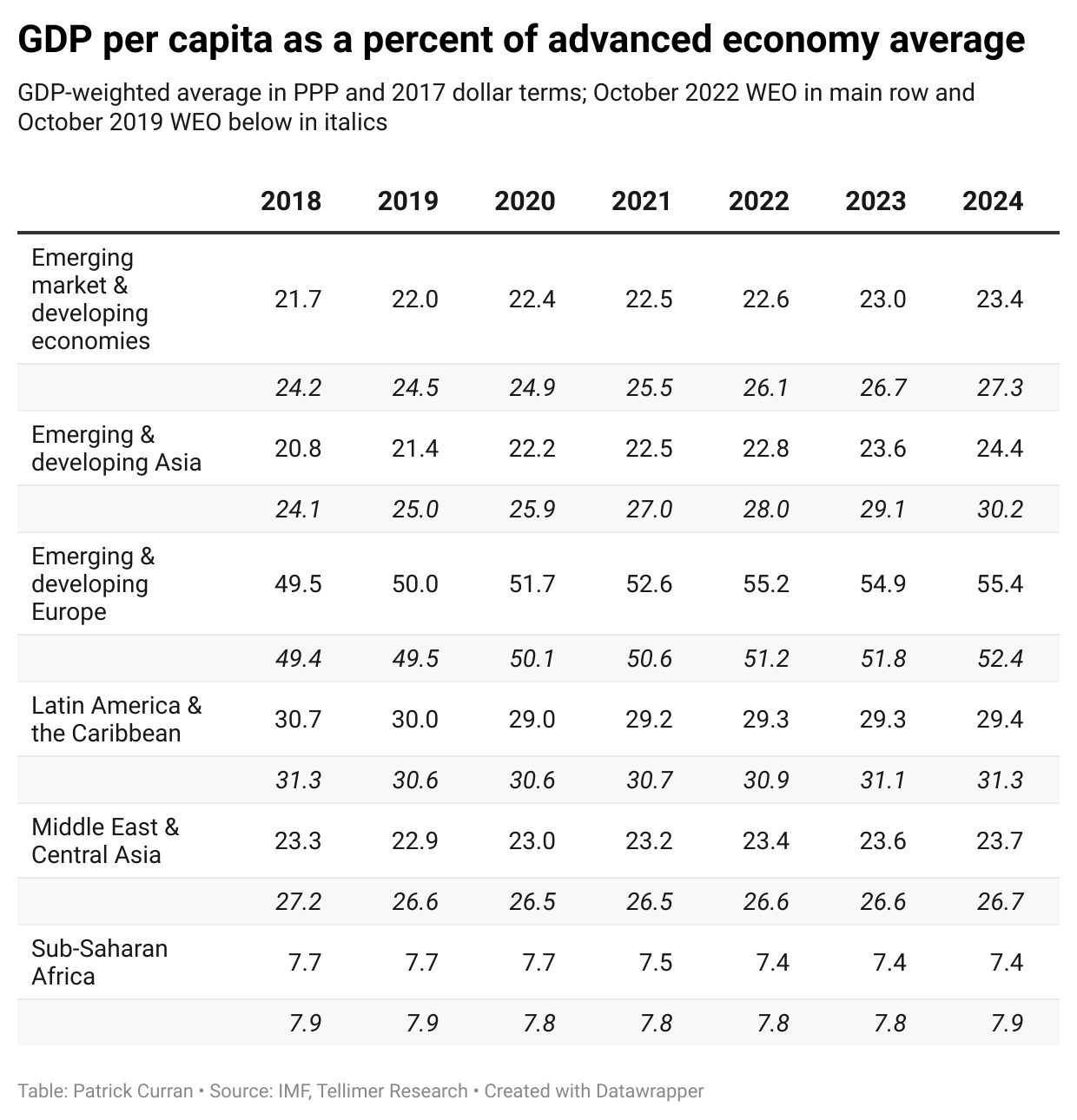 To the extent that the outperformance of emerging market assets relative to advanced economies hinges, in part, on outsized economic growth (although growth is no guarantee of returns, as the old adage goes), the backdrop may be slightly less favourable over the next five years than it was over the previous two decades, with returns in emerging Asia and Europe likely to continue dominating returns elsewhere in the emerging market universe (notwithstanding the recent collapse in emerging Europe’s returns, which is mainly attributable to losses in Russia, Ukraine and Belarus). 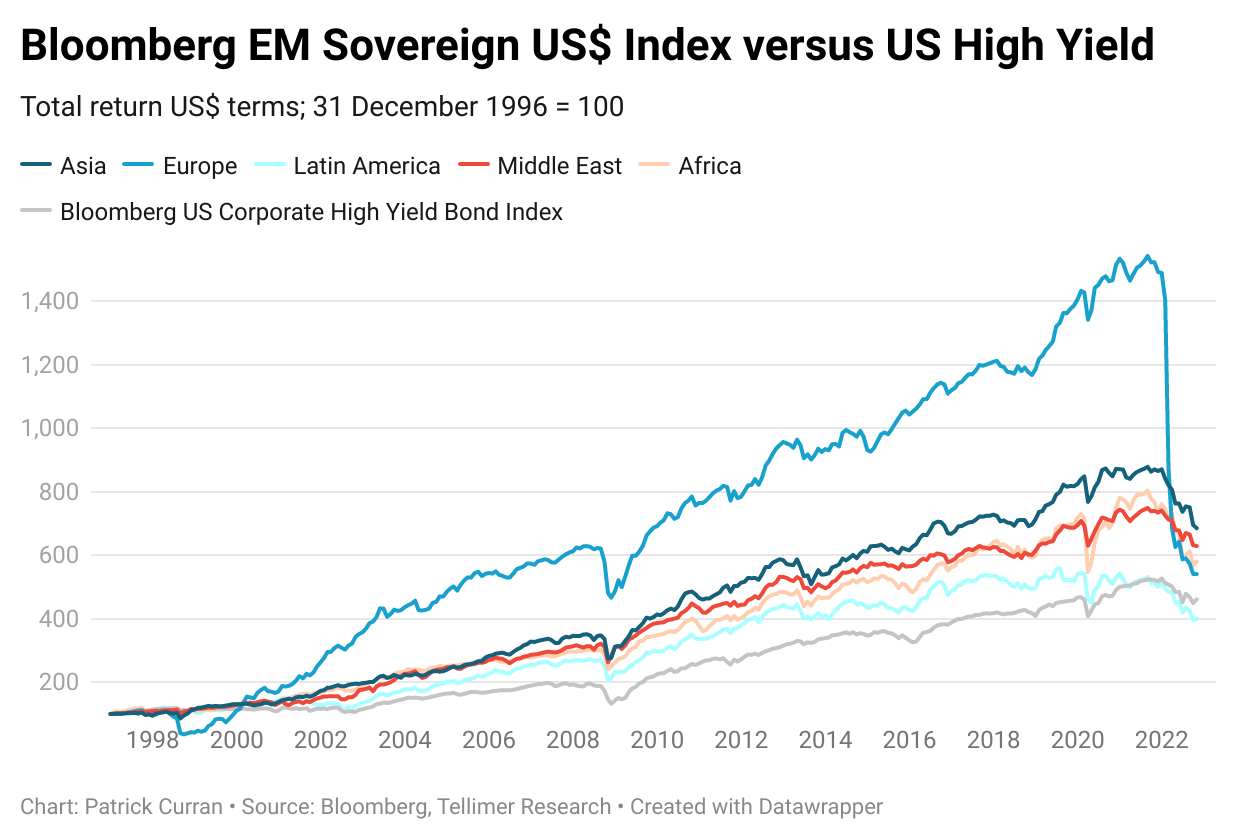 That said, as always there will be significant differentiation between countries, with the chart below ranking all emerging markets by per capita growth over the next five years. The list is topped by many smaller frontier markets (Guyana, Libya, Palau), while among more mainstream emerging and frontier economies the stronger per capita growth will be seen in Asia (Bangladesh, Vietnam, India, and Cambodia) plus a handful of countries in Africa (Mozambique, Ethiopia and Rwanda) and Europe (Moldova and Georgia). 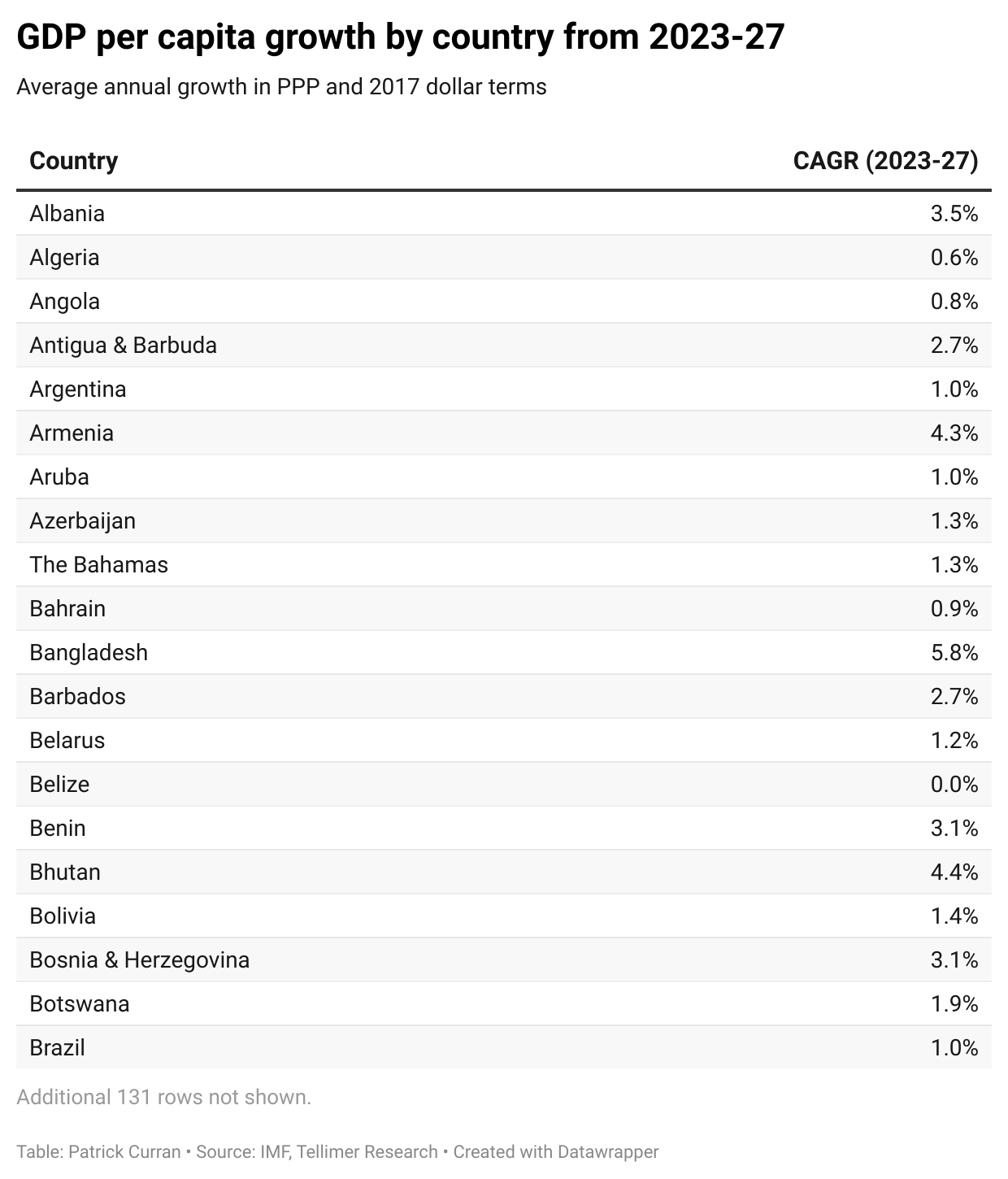 On the other end of the spectrum, per capita growth over the next five years is projected to be lower than the advanced economy average in 30% of emerging markets tracked by the IMF (ie per capita incomes will diverge even further). Meanwhile, post-pandemic scarring and downward growth revisions in emerging markets contribute to a much slower pace of income conversion than anticipated just three years ago, and “catch-up” will likely continue to be limited to a select group of smaller frontier markets and “convergence club” members across Asia and Europe.