4 May 2022
Published by
ETM Analytics

The FOMC will take centre stage today. Traders will be watching closely to see if the Fed follows through on recent communication and front loads its tightening cycle with a 50bps rate hike. It is widely expected that the Fed will use the opportunity to send a clear message that it is committed to reining in inflation even as growth concerns intensify following the miss in the Q1 GDP print. Notwithstanding the renewed growth concerns, we expect the Fed to stick to its guidance and raise rates by 50bps at its May meeting.

The risk is that the markets have overpriced the hawkishness of the Fed. Should the statement be even the slightest bit dovish, we could see the dollar come under pressure which would see gold and other commodities rally. We hold the view that much hawkishness has been priced in and thus the risk is towards the dovish side.

Africa: Reports quoting sources close to the matter suggested that Coca-Cola's estimated $3bn initial public offering (IPO) for its African bottling unit will occur in Q3 after market turmoil linked to Russia's invasion of Ukraine disrupted plans to list earlier. The war in Ukraine has dented investor confidence and triggered a decline in the volumes of IPOs in Europe, the Middle East, and Africa as rising commodity prices and disrupted supply chains undermine growth and call valuations into question. Were it to materialise in Q3, the flotation of Coca-Cola Beverages Africa (CCBA) would be the biggest on the Johannesburg Stock Exchange since at least 2016 and a major boost for the flagging index.

Nigeria: Petroleum Minister Timpre Sylva has indicated that Nigeria, along with Morocco, are still in the process of obtaining funding for a massive pipeline project that aims to carry Nigeria's gas to North Africa and onto European markets. Minister Sylva said that the pipeline would be an extension of a structure that has been pumping gas from southern Nigeria to Benin, Togo, and Ghana since 2010. Sylva said that there has been a lot of interest from international investors in the project but added that the country has not yet identified a suitable one. Africa's gas supplies are increasingly in the spotlight as Europe looks to wean itself off Russia's production after the invasion of Ukraine in February.

South Africa: The Absa PMI figure dropped sharply in April, holding narrowly above contractionary territory with a figure of 50.7 following a reading of 60.0 in March. Notably, this is the largest drop in the headline figure since July 2021, a period of unprecedented looting and rioting that shook local production and demand. As was the case then, the decline stemmed from the devastating flashfloods in parts of KZN, which led to facilities in several sub-sectors temporarily closing and impacted the flow of goods amongst other logistical constraints arising from the floods from Durban's ports to other areas of the country. As a result, areas not affected by the flooding may have seen a drop in demand. This exacerbates the challenges the SA manufacturing sector is facing from high raw material and administered costs, load-shedding and weak demand. Five of the six subcomponents declined, with a somewhat surprising and encouraging rise in the employment index. This may suggest that the declines in activity and demand may be deemed temporary, not necessitating producers to shed further jobs. Still, the ramifications of the geopolitical tensions on SA's manufacturing sector through higher costs are still to be felt in the months ahead, keeping sentiment among manufacturers relatively subdued.

Zambia: Data from ZamStats showed that Zambia's copper exports remained relatively unchanged in Q1 despite improved prices on the international market, as the country had to contend with operational disruptions. In the three months to March 2021, copper exports increased marginally to 464,800 metric tons from 463,700 tons exported in the same period last year. Note that state miner ZCCM-IH has been struggling to steady operations at least for large-scale copper mines on the Copperbelt province, since the start of the year. Zamstats has warned that rising concerns of a worse-than-expected economic slowdown in China which imports at least 40% of Zambia's copper output, could further weigh on prices and much-needed foreign exchange income.

South Africa: Monday's bout of depreciation was exacerbated by thin market conditions. It was always going to be tough to consolidate, given the ZAR's undervaluation and the attractive rates on offer to investors. Not even the resumption of load shedding or the rising expectations of central bank tightening was enough to prompt a further slide in the ZAR. On the contrary, the ZAR made a recovery and leveraged off a slight improvement in risk appetite as the VIX reversed off its highs and the USD itself settled into a tighter range, reluctant to appreciate any further ahead of the FOMC decision and guidance which will be delivered later today. 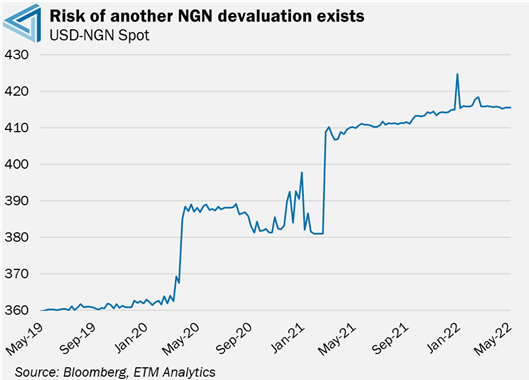 Nigeria’s foreign exchange reserves had come under pressure in recent months on the back of increasing CBN intervention in the forex market. High demand for dollars had put pressure on Nigeria's reserves which the central bank has used to defend the Nigerian Naira. Meanwhile, Nigeria has been unable to take full advantage of higher than normal oil prices as the country is unable to fulfil its OPEC+ quotas due to crude theft and diversion of oil revenues to subsidise gasoline prices for its population.

While the slight improvement in foreign exchange reserves may provide further room for the CBN to support the FX market in the near term, foreign inflows are crucial for sustained FX liquidity in the medium term as low crude oil production levels suggest that the growth of reserves is likely to remain weak. Weak reserve growth and persisting oil production challenges suggest that risks for another Naira devaluation exist. ETM’s indicators show that the Naira is overvalued by almost 7.0% on a real effective exchange rate basis implying there is room for depreciation.

The deterioration in financial market conditions and surging yields resulted in a slump in emerging market debt sales in April. Data compiled by Bloomberg showed that emerging market debt sales plunged to their lowest level for the month of April in a decade as renewed concerns over China, the war in Ukraine and the hawkish pivot from major central banks deterred the government from issuing debt. Specifically, emerging market governments and companies raised $30.6bn of bonds in USD or EUR in April, almost half of the issuance in April 2021. This is the lowest issuance for the month of April since 2012. 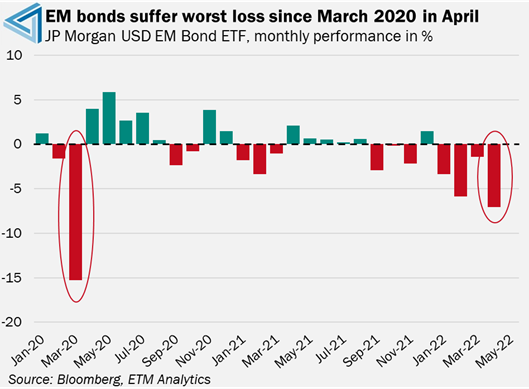 The average yield on USD denominated debt rose above 6.3% at the start of the week to hit its highest level in two years, making it prohibitively expensive for non-investment grade emerging markets issuers. The marked increase in international lending costs and deterioration in global risk appetite saw Kenya announce that it is scrapping its plans to sell $1bn of Eurobonds in the first half of this year. This is an example of how the hawkish pivot from central banks has deterred governments from issuing bonds in the international bond market.

The risk-off conditions and hawkish verbal communication resulted in a broad-based sell-off in emerging market bonds in April. Specifically, emerging market debt funds suffered their most significant outflow since April 2020 last week. According to EPFR Global data, investors pulled just under $4bn from emerging market debt funds last month. JP Morgan’s USD Emerging Markets Bond ETF lost over 7% last month, its worst monthly performance since March 2020. The outlook for bonds rests on the forward guidance provided at tonight's FOMC meeting. Should the Fed tone down its hawkish rhetoric on the back of renewed growth concerns, we could see a recovery in bond markets across the globe. The opposite also holds true.

Macroeconomic: Ghanaian politicians warn of a possible default unless something drastic is done

It is no secret that Ghana has slipped into a position of fiscal distress. This is evident when looking at the massive fiscal premium that traders are demanding for holding Ghanaian debt. For context, Ghana’s 2032 Eurobond yield has surged back above the 16% mark as traders continue to dump Ghanian bonds on the back of mounting fiscal concerns.

The latest sell-off in Ghanain bonds put the country’s fiscal premium, the spread between the 2032 Eurobond yield and the 10yr US Treasury yield, north of 1300bps and well within debt distress territory. Ghana’s 5yr USD credit default swap, effectively the cost of insuring against sovereign default, has spiked, climbing to 1603bps on Tuesday. At these levels, the market is pricing in significant default risk. 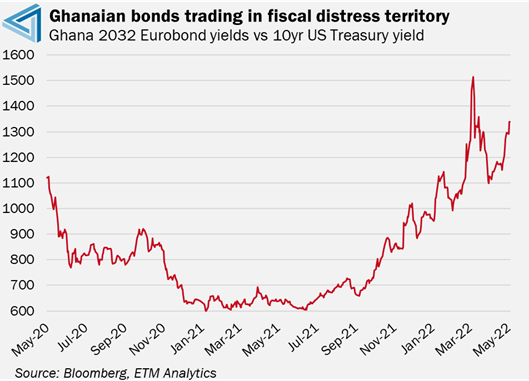 Speaking of which, Ghana’s main opposition leader and former President John Mahama warned that West Africa’s second-largest economy is at risk of defaulting on its debt unless “something drastic is done.” According to the Finance Ministry, total public debt increased to GHS 351.8bn, or 76.6% of GDP, at the end of last year, from GHS 291.6bn or 74%, at the end of 2020. Meanwhile, debt service costs have risen five-fold to around GHS 50bn since 2016.

This means that more than half of Ghana’s tax revenue goes towards debt servicing costs, with almost all of the remaining funds going towards public sector wages. This leaves almost nothing in the budget for infrastructure spending and other government-funded projects, making the government unable to meet its spending obligations in the most critical sectors of the economy.

Former President Mahama urged President Nana Akufo-Addo to sack his Finance Minister, reshuffle his cabinet, reduce expenditure and overhaul the Economic Management Team to deal with soaring debt. While the government has recently rolled out some reforms to improve the country's dire fiscal situation, more needs to be done if Ghana is to return to a sustainable fiscal position. Until then, debt default risks are expected to intensify, and a massive fiscal premium is expected to remain baked into Ghanaian bonds.