Higher demand, as Covid-19 lockdowns have eased, allied to supply-chain issues, are driving up global inflation. Central banks are taking corrective action; 15 out of 47 emerging markets in our sample have already raised rates in 2021; many more are expected to follow suit. Banks can be key beneficiaries of rising rates, particularly in the early part of the tightening cycle, as their margins are positively geared to interest rates. Later in the cycle, negative aspects can become more meaningful; lower loan demand, worsening asset quality and investment portfolio losses. In this report, we consider the sensitivity to higher interest rates of 113 banks across 47 emerging markets, looking at the implications for both margins and profits. This allows us to build a framework to assess those banks that could benefit most from expected interest rate moves over the coming 15 months, and those likely to suffer.

For ease of reference, we present the results of our analysis at the country level in this report. Bank-level results will be presented in a follow-up study. 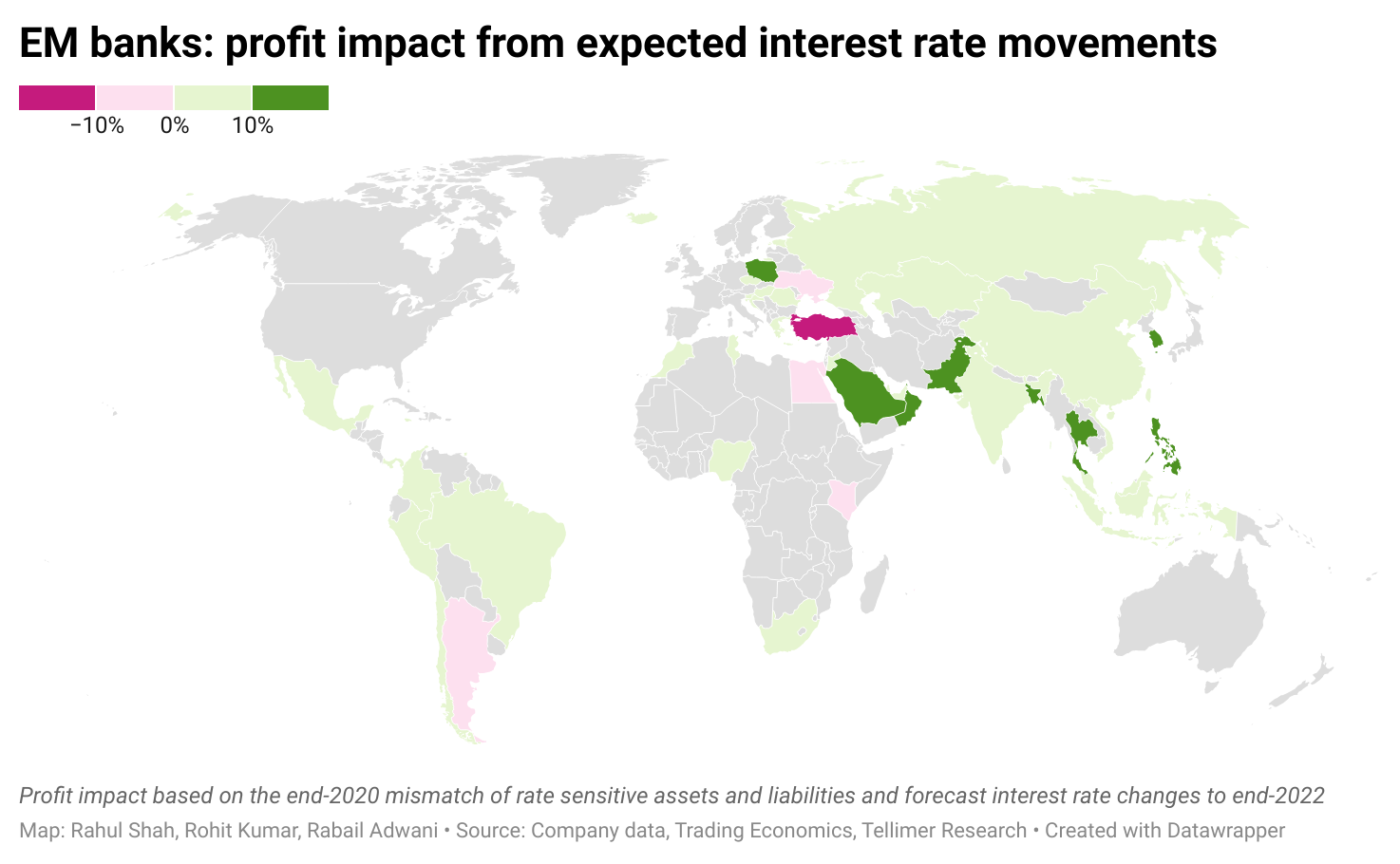 Owing to growing inflationary pressures, central banks in 15 from our sample of 47 emerging markets have raised rates so far in 2021. Brazil leads the way, with a cumulative 4.25% rate hike, while the only countries in our sample to have reduced rates this year are Turkey (net 100bps cut) Indonesia (25bps).

Looking forward, Trading Economics expects 32 out of our 47 selected emerging markets to raise rates further by end-2022; the median expected rate hike over this period is 50bps. Pakistan is expected to deliver the biggest increase (1.75%), followed by Brazil (1.5%). In contrast, Turkey and Argentina could instead cut rates (but from elevated levels). 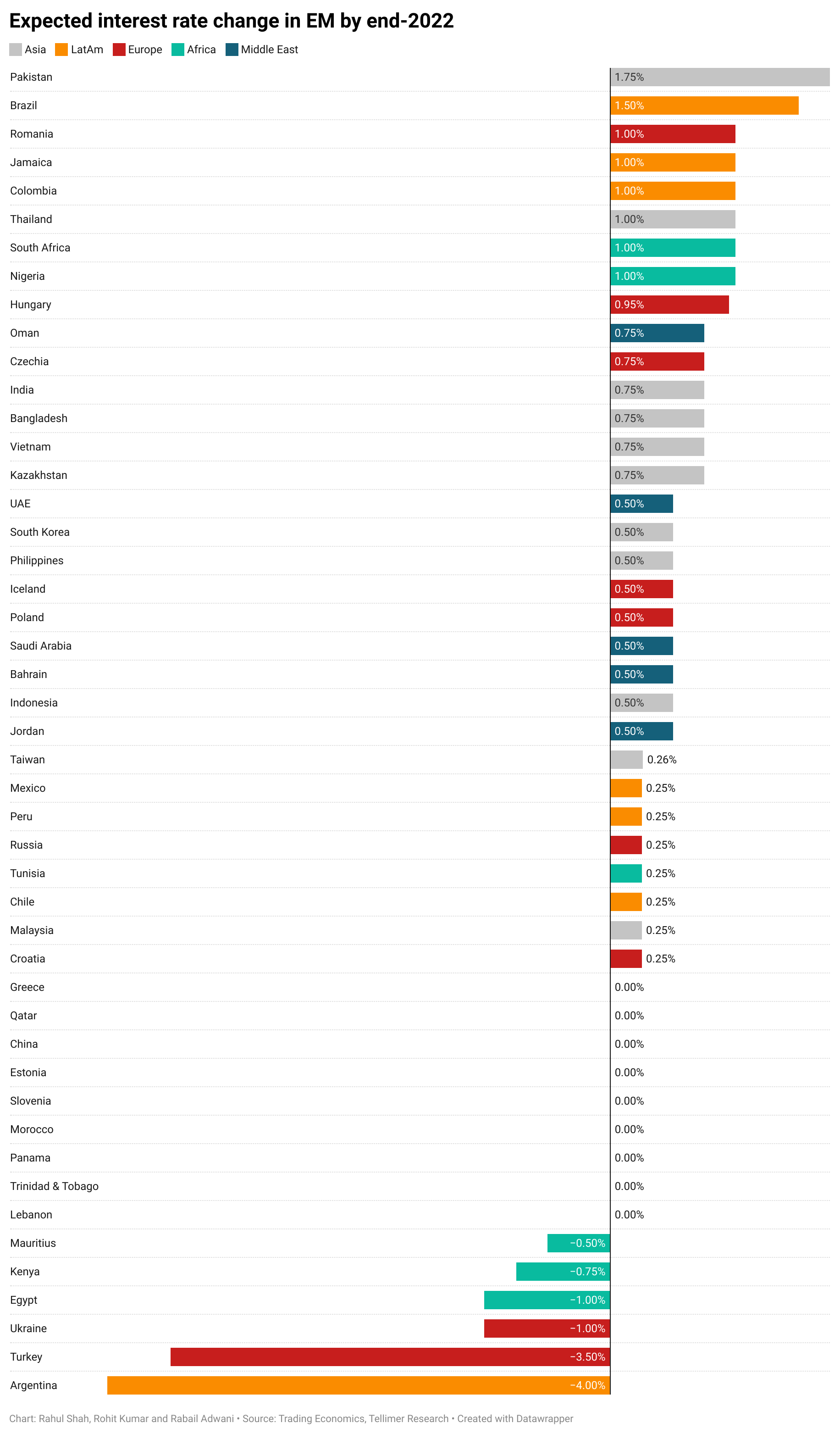 The major benefit of higher interest rates for banks is bigger asset yields, which typically translates into wider margins. However, there can be negative effects also: fee income can suffer from a shift in organisational focus to spread-based business; higher interest rates typically lower the value of fixed income securities, resulting in investment losses; loan demand can weaken; higher financing costs increase the financial burden on borrowers, which can translate into loan quality deterioration. In turn, this could encourage banks to reposition their portfolios towards lower risk (hence lower-yielding) assets. 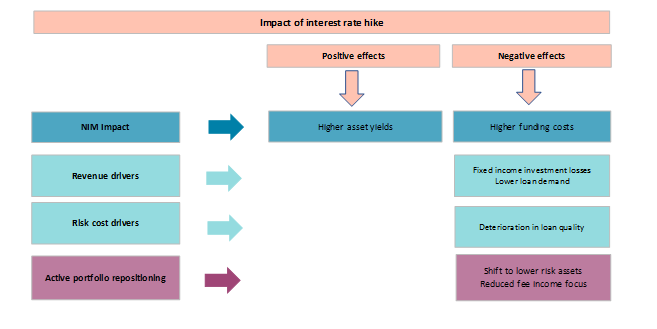 As we are still in the early stages of the current global tightening cycle, we think for most banks the positives substantially outweigh the negatives. Margins are a core earning driver for banks; net interest income typically accounts for around two-thirds of an emerging market bank's top line. A 10bps widening in margins typically raises an emerging bank's earnings by 5-6ppts. Greek banks' bottom-line is most sensitive to higher margins; their current margins and profitability remain depressed. In contrast, banks in Argentina and Ukraine are less sensitive, given their already high margins. 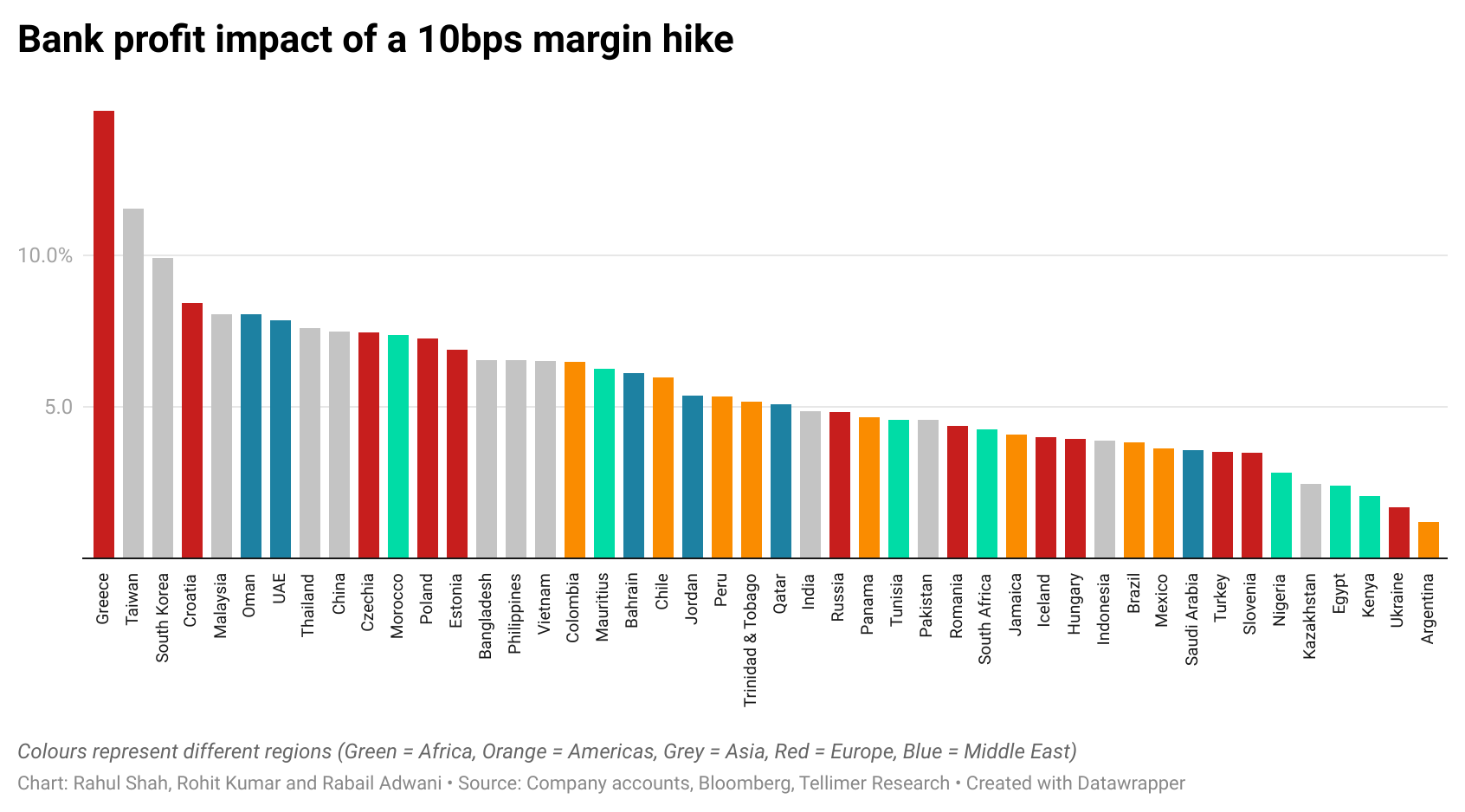 When assessing the profitability impact of higher interest rates, we primarily need to consider two things:

Which banks' margins are most sensitive to higher interest rates? 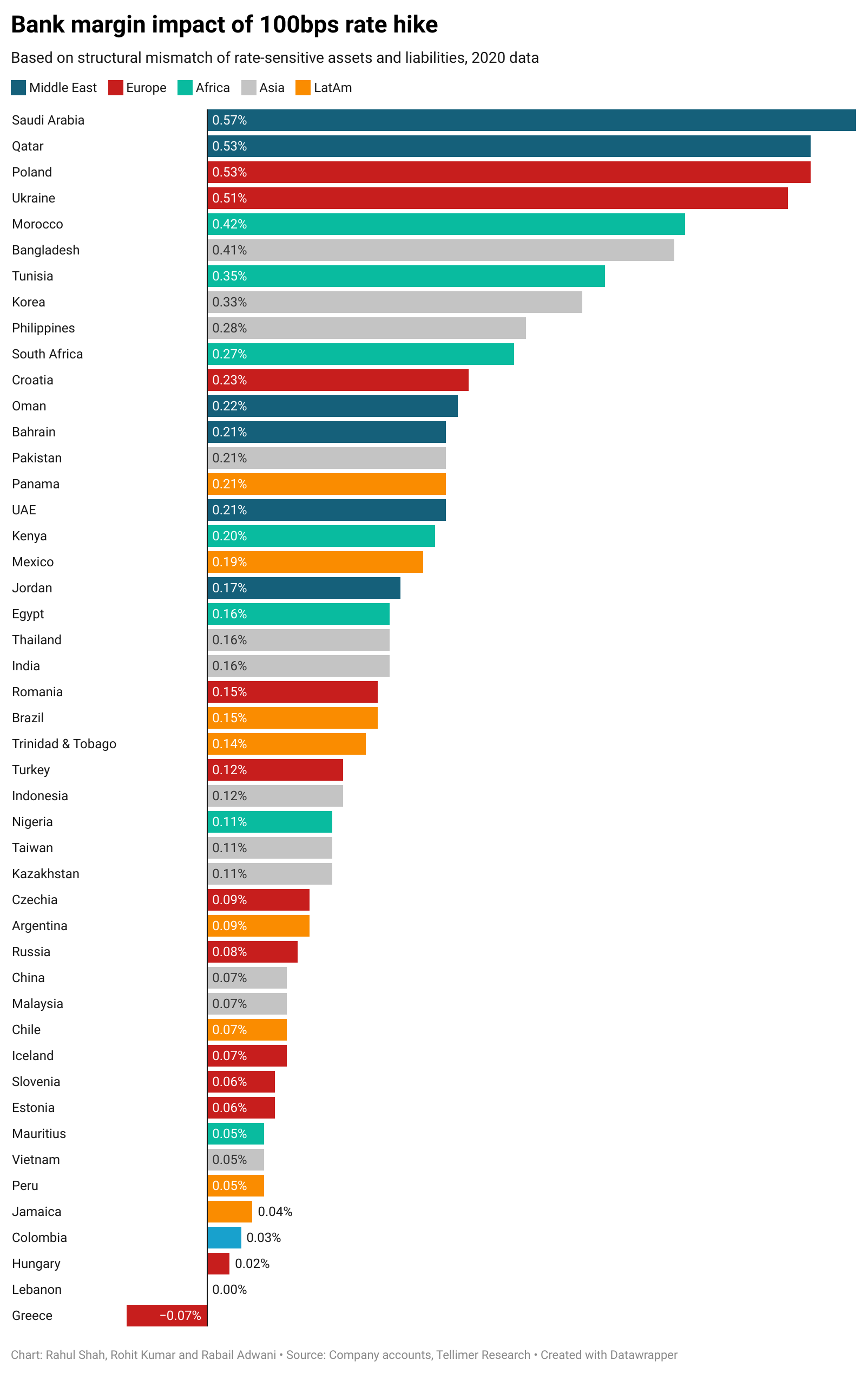 Which banks' profits are most sensitive to higher interest rates?

Looking at the sensitivity of banks' profits to interest rate changes, Poland, South Korea, Morocco and Bangladesh rank towards the top. This is because their margins are sensitive to interest rate changes and they also have high gearing factors for operating and risk costs. In contrast, although Saudi banks have the biggest structural margin sensitivity to rate hikes, their modest operating cost structures and low risk costs cushion the bottom-line impact; as a result, they rank only 7th in our profit sensitivity chart. 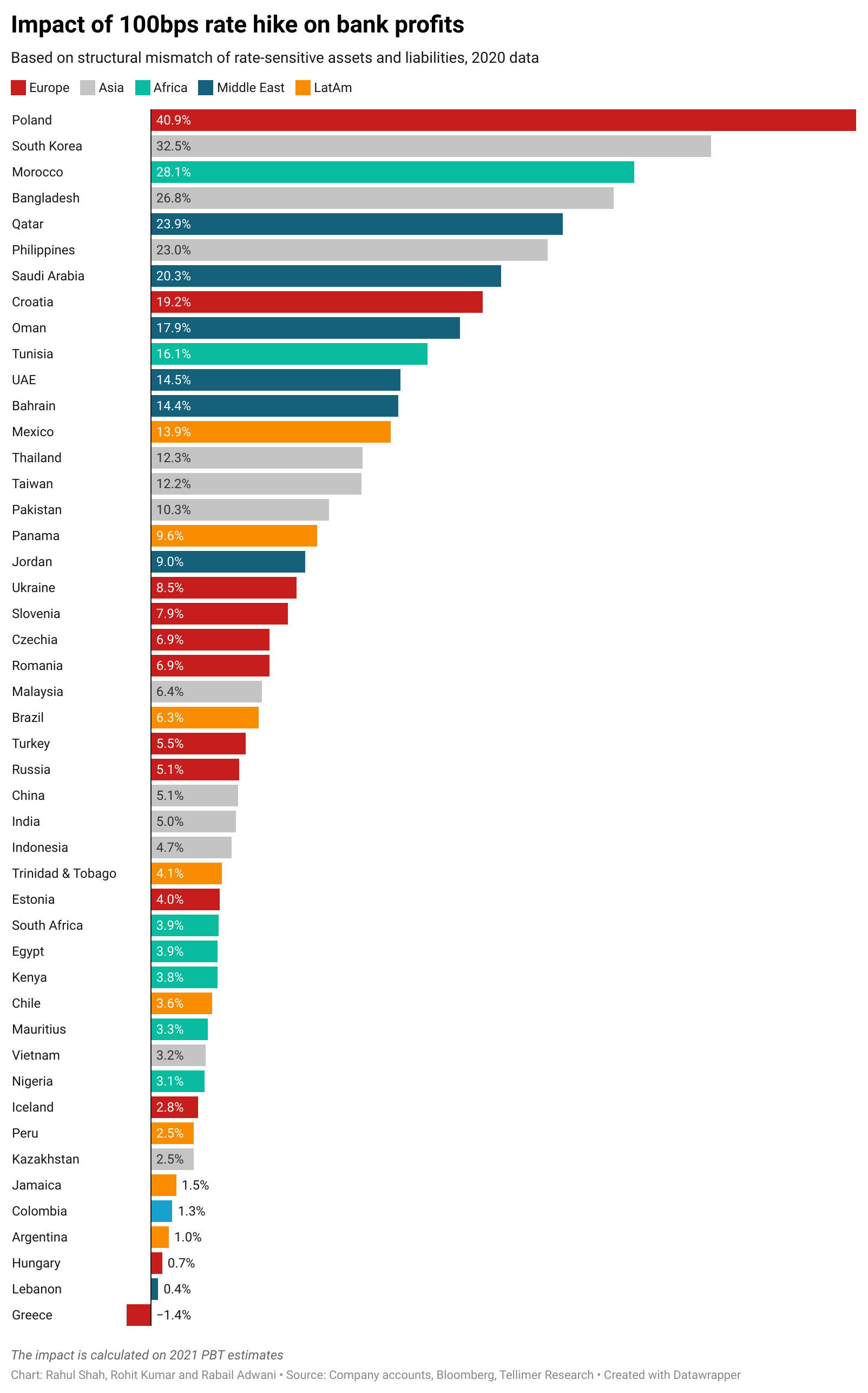 The banks that could benefit the most

Comparing the profit sensitivity of banks in various markets with expected rate hikes, Poland, Bangladesh, Pakistan and South Korea banks are likely to see the biggest bottom-line benefit from the rising rates environment. 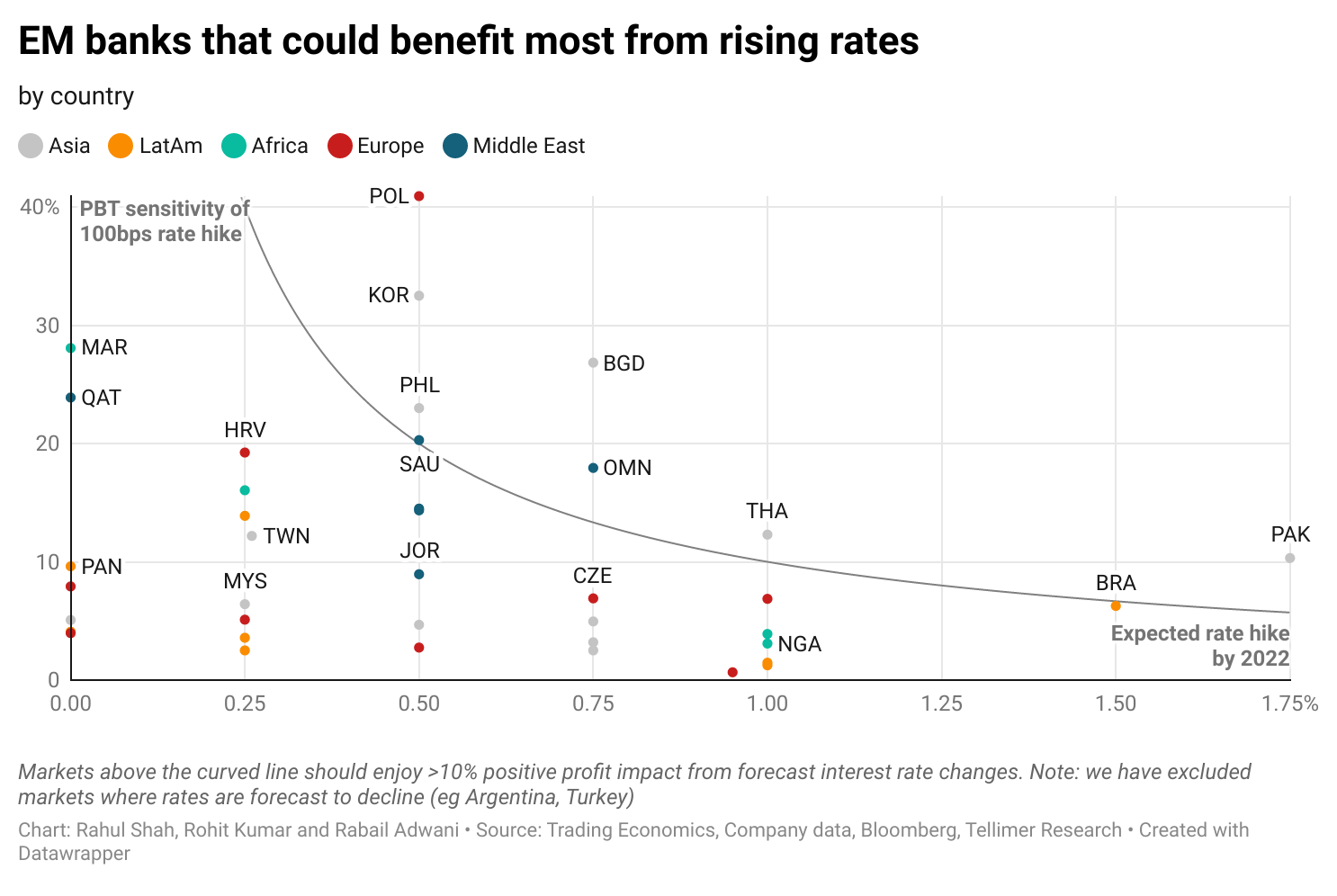 Bank earnings could benefit most from expected interest rate changes in:

However, as highlighted in the map at the beginning of this report, there will also be some markets where interest rates could be a drag on profitability, notably for banks in Turkey. Other negatively affected banking sectors include Argentina, Egypt, Kenya and Tunisia.