South Africa: Investors will have the February and March editions of the SACCI business confidence index to digest today. These prints will likely be weighed down by the impact of the Russia-Ukraine war on the South African economy, with surging fuel costs a deterrent to economic activity, especially amid concerns that inflation will keep rising despite consumer incomes failing to rise. The market-moving potential of this data is limited, however, with external developments likely to be far more important in that regard.

Turkey: Data from the Uludag Automotive Industry Exporters Union (OIB) revealed that automotive exports dropped notably in March as the sector grappled with the persistent global shortage of semiconductors. Specifically, exports fell 7% y/y to $2.7bn, with the drop primarily attributed to plunging passenger car exports, down 34%. The increase in the supply industry and the bus-midibus-minibus product group partially offset this. Additional headwinds to the industry's export came from Russia and Ukraine's fallout, soaring input costs, and disruption in the supply of raw materials. Given these lingering challenges, the Turkish automotive industry will likely remain under pressure in the coming months.

Russia: While the market will have to navigate headlines concerning the EU's banning of Russian coal imports and Russia's suspension from the UN Human Rights Council, the main focus today will be on CPI data. Sanctions have sent prices soaring in the country, with weekly CPI numbers suggesting headline inflation could approach 17% in March. Consensus expectations as per Bloomberg surveys are consistent with this, with analysts pencilling in a 16.90% rate. Beyond the RUB's sharp depreciation (and, since then, recovery), outright scarcity is starting to be reflected in price pressures, which are expected to last for the foreseeable future.

Hungary: Today, the data calendar picks up with March CPI statistics on tap. The former remains on an upward trajectory after accelerating for the second consecutive month in February to reach 8.30%, the fastest pace of growth in more than fourteen years. Price pressures in Hungary are mainly being driven by soaring energy and food prices, supply-side bottlenecks, rising input and logistic costs and shortages of raw materials. Additional inflation pressures also stem from the recovering domestic demand, tightening the labour market, and high wages. Given these underlying inflation risks, pressure remains on the central bank to keep tightening monetary policy to help anchor inflation expectations.

Poland: During his presser yesterday, the NBP Governor Adam Glapinski noted that he sees room for further interest rate hikes on the back of war-linked inflation. The central bank chief told the reporters that Russia's attack on Ukraine had fuelled a spike in Polish inflation, and this will likely require further rate hikes. Some 4-5pps of the current inflation rate are said to have been caused by the fallout of the war in Ukraine, mainly higher energy and food prices. While refusing to say how high interest rates could rise, Glapinski noted Polish rates are still low in historical terms. However, if inflation starts to decline, he could envisage a cut in official borrowing costs from the end of next year.

South Africa: As we close the week, the USD-ZAR is testing resistance around the 14.8000 mark. While there are strong cogent arguments for the ZAR to remain resilient and even appreciate from these levels, investors will also recognise that the ZAR appreciated some 5.50% through March and from levels back above R16.0000/$ in December. So, while his week's ZAR losses may feel uncharacteristic, they remain relatively small. The correction can extend further, and the ZAR's broader strengthening bias would still remain intact. Much depends on commodity prices from here, though, given that much of the ZAR's recent strength has been founded in commodity outperformance.

Turkey: The USD-TRY continues to consolidate, driven by the FX intervention by the central bank to contain volatility. Turkish state banks are said to have sold more than $3bn of foreign exchange since the beginning of last week to prop up the local currency. Despite the steady performance, the TRY has an extremely low carry appeal. The ETMs Carry Attractiveness model, which tracks twenty-two currencies, shows that the TRY has the lowest carry score given its weak resilience due to the poor underlying macroeconomic fundamentals.

Russia: The RUB has continued to firm against a broadly stronger USD, as it trades back at levels seen before Russia invaded Ukraine back in February. The currency has shrugged off a new round of sweeping sanctions and growing concern that Russia is heading to an artificial default on its bond coupon payments, as it continues to benefit from capital controls and Russia's oil and gas exports. This resilience is expected to remain the order of the day in the near term, with the RUB looking increasingly comfortable at sub-80.00/$ levels.

Hungary: The EUR-HUF bucked the rally seen in the last three trading sessions yesterday. Intraday, the cross firmed by 0.75% to reach 378.48 as traders were disappointed about the NBH's decision to leave the one-week deposit rate unchanged. However, the move was not sustained as sellers joined the trend taking the price lower, erasing all the earlier gains and leaving the cross 0.21% below the previous close. The pair is trading relatively flat ahead of the euro open as investors exercise some caution ahead of the important local data releases.

Poland: The EUR-PLN bears regained control on Thursday as the local currency was offered some support by the hawkish comments made by central bank chief Adam Glapinski. The cross slipped by about 0.36% to end the day firmly wedged between the 50-and 100-SMA. The losses in the cross were capped by the risk-off narrative due to the prospects of the US Fed tightening monetary policy and rising COVID-19 cases in China, which has triggered new lockdowns. Although the EUR-PLN has unwound most of the gains from this year's highs, the PLN remains undervalued on a PPP basis, suggesting that the cross still has legs to correct lower further.

Czech Republic: The EUR-CZK continued with its trend higher yesterday, closing at 24.506, bringing the 50DMA resistance at 24.687 into focus heading into the weekend. With interest rates rising globally and the war in Ukraine ragging on, the appeal of CEE currencies could moderate. As a result, investors are likely to shift away from the Czech Republic, where the economy is expected to be hit by higher interest rates and the Ukraine conflict. Though there is ample scope for the EUR-CZK to rise and correct some of its losses, the central bank has made it clear that it will stand as a backstop to currency losses in order to contain supply-side inflationary pressures. In particular, the CNB sold roughly €122mn ($137mn) of returns last month from its FX reserves, the same amount as in the previous month, to support the local currency.

South Africa: SAGBs are finding favour with a light bidder bias reflected in lower yields yesterday. This could continue today given global risk sentiment that is a little weaker. Curve flattening seems likely to emerge once again with a view for higher SARB rates yet lower longer term growth and inflation risk suggesting that the R2048-R186 spread, for instance, could flatten once more. Note that the yield spread between the 10-year SAGB and its US Treasury equivalent compressed to its narrowest since early-2020 this week. Should this narrowing trend persist, local bonds may lose some carry appeal through the months ahead, which could begin to weigh more heavily on the ZAR's resilience.

Turkey: Both the local-currency and USD-denominated yield curves look set to close the week notably steeper than what they started, as long-end Turkish bonds have come under selling pressure this week. This was in response to surging UST yields after the Fed signalled a more aggressive monetary tightening trajectory. Given Turkey's weak fundamentals, the countries bonds may make gains in the months ahead as global financing conditions tighten. That being said, further downside risks are likely to be limited given how much in the way of prospective Fed tightening is now priced into the market.

Russia: Consistent with growing default fears as reflected in the CDS market, Russia's USD-denominated bond yields have skyrocketed this week as investors scramble to offload them. Accordingly, some tenors have added over 7000bps to its yield this week according to Bloomberg pricing data. CDS rates meanwhile have a near-100% chance of default baked in, as Russia signals reluctance to sink into its USD reserves to pay coupons.

Hungary: Interest in the regular bond auction held yesterday was slightly softer after the AKK managed to sell HUF35.5bn worth of bonds, below the plan by HUF4.5bn. Primary dealers' bids arrived at HUF64.6bn. Zooming in on Individual tenors, investors favoured the 2033/A ten year bond, attracting bids of HUF31.2bn, prompting the government agency to sell HUF15bn, in line with the original offer. The AKK also sold HUF10.5bn of 2032/A ten year bonds, cutting the initial offer by HUF4.5bn after primary dealers bid just for HUF17.9bn (down HUF39.7bn two weeks ago). The least favoured bond was the 15yr tenor, which attracted bids of HUF15.5bn and the AKK managed to sell HUF10bn.

Poland: Polish bonds tracked the performance in the core markets on Thursday on the back of the prospects of the US Fed tightening monetary policy further and aggressively withdrawing global liquidity. Additional tailwinds to the local debt market stemmed from the hawkish comments from NBP Governor Glapinski, who signalled that more rate hikes could still be on the table. As a result of the bear flattening bias, the 10v2 inversion deepened, suggesting that growth risks remain amplified.

Czech Republic: Swap rates traded higher yesterday, up 15bps on average, as investors grappled with the shocks of aggressive tightening potentially causing a recession, and more Western sanctions on Russia, further stoking inflation. Coal prices are expected to rise significantly at the open today after European Union countries signed a ban on coal imports from Russia and pledged to start working on an embargo on Russian oil, gas and nuclear fuel. With this news, energy prices are likely to rise further, heightening inflation concerns and the need for the central bank to implement conventional and unconventional monetary policy measures to tame inflationary pressure. As a result, swap rates are anticipated to rise in the short term, making it profitable to be a payer of swaps. 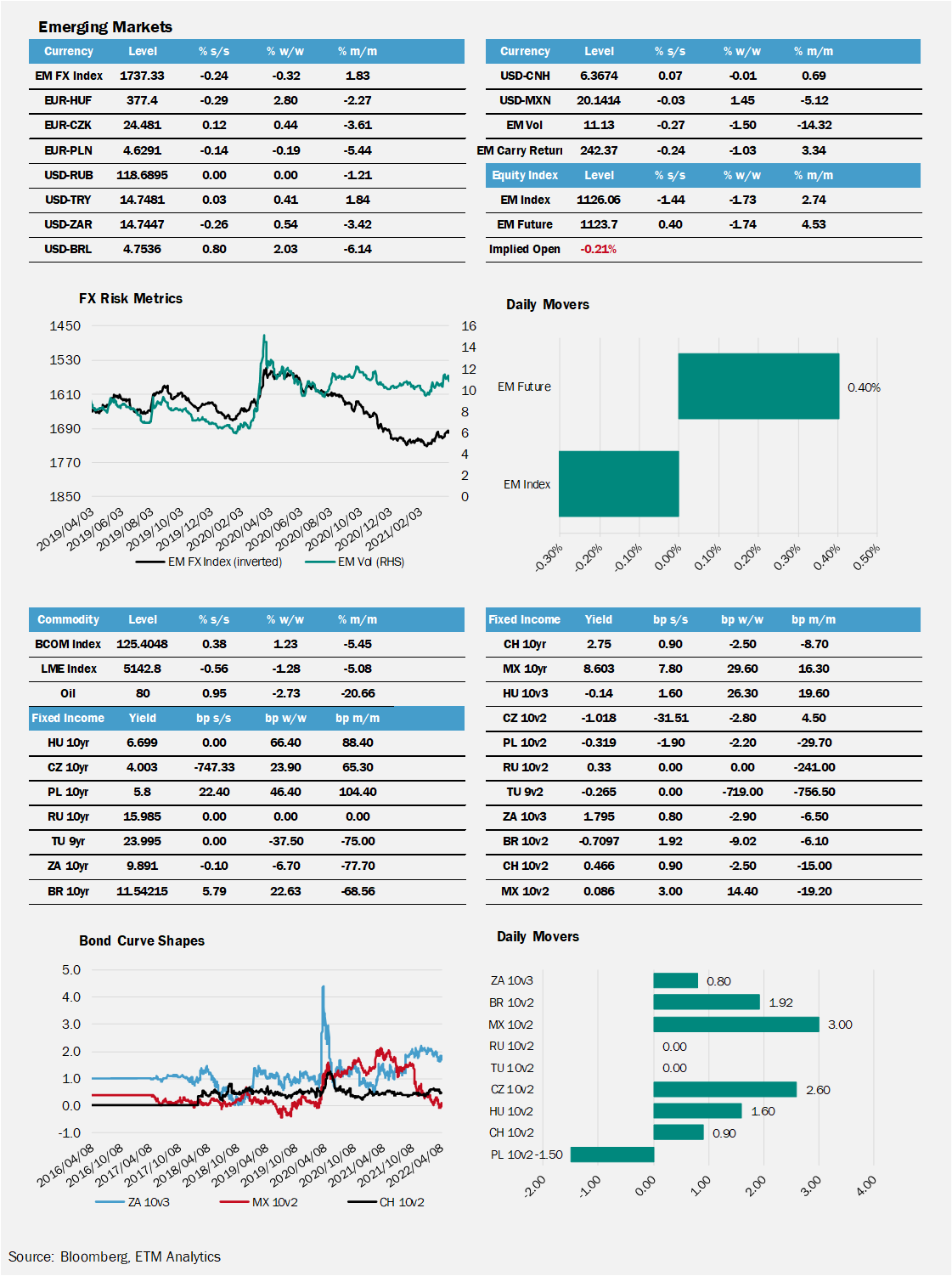 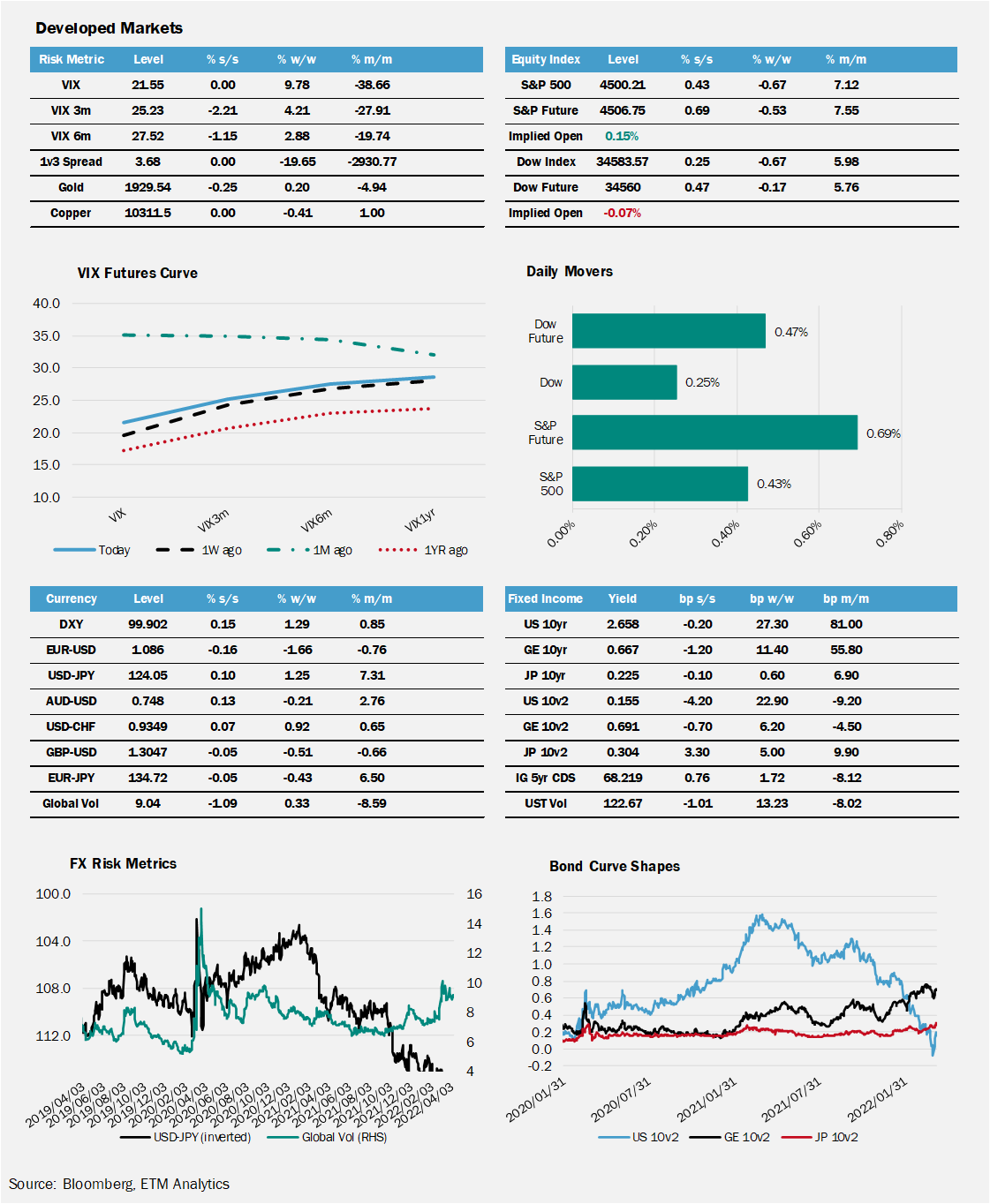