Although this was the strongest monthly issuance for four months, it was well down on recent Januarys. As we noted a few weeks ago, this may have been due to rising US bond yields caused by inflation concerns and a more hawkish Fed. 10-year US yields rose 27bps on the month, closing yesterday at 1.78% on Bloomberg but having peaked at 1.87% in the middle of January, adding to market uncertainty. 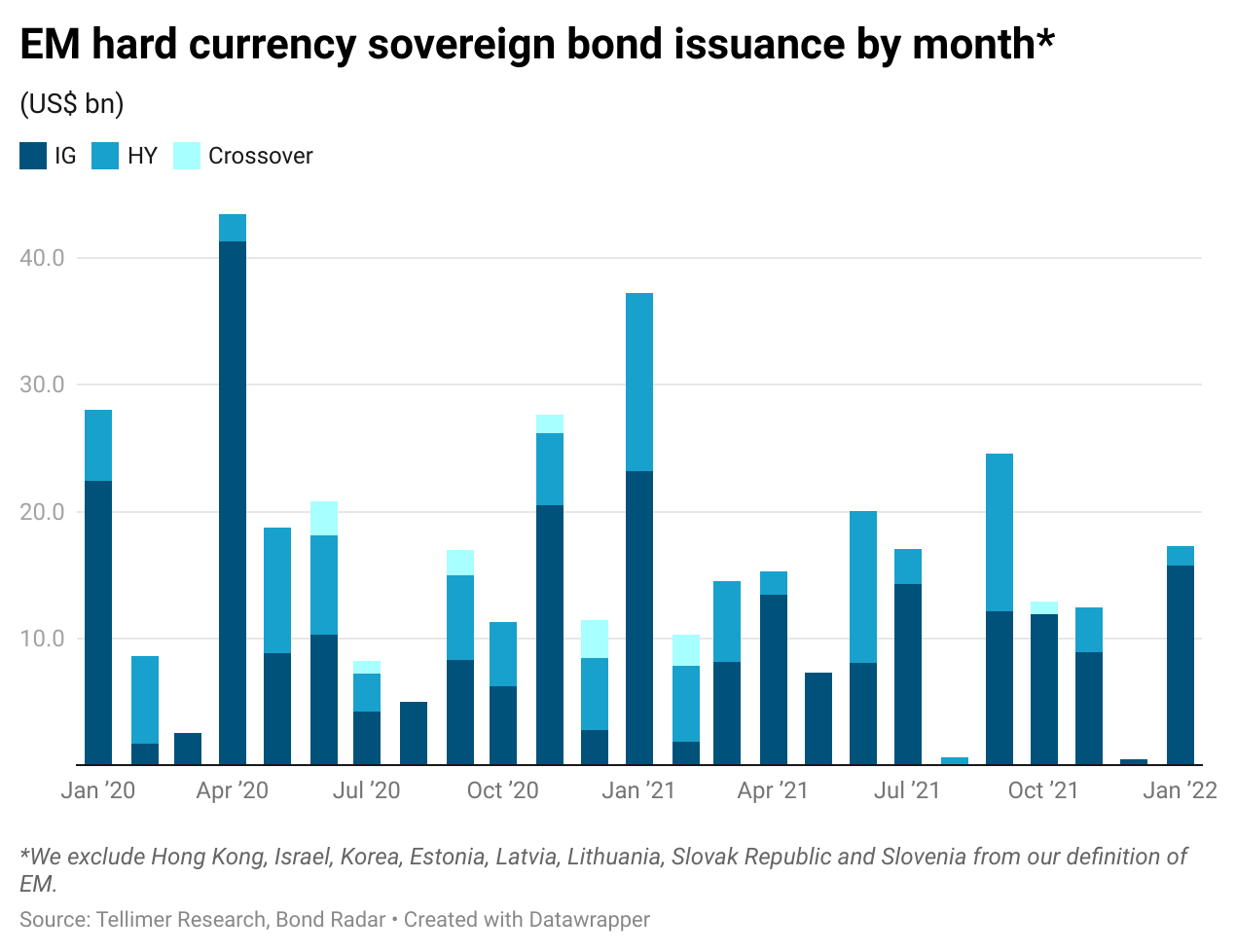 Within overall issuance, the bulk came from investment grade (IG) issuers, which accounted for over 90% of the total. High yield (HY) was less than 9%.

But even that doesn't tell the whole story. There were only six issuers altogether and the issuance total would have been much less (US$14.5bn) if Romania hadn't squeezed in its second dual tranche offer of the month on the last day of the month.

Within HY, there were only two issuers, namely Paraguay (Ba1/BB/BB+) and Pakistan (B3/-/B-). Paraguay issued a US$500mn 11-year bond along with a tender offer for its 2023s and 2026s. Pakistan issued a US$1bn seven-year sukuk. The four IG issuers were Mexico, Panama, Romania and Chile.

To put last month's subdued start into perspective, it represented a fall of over 50% from the record January last year, which was comfortably the largest seen in the first month of the year since the global financial crisis. January 2021 saw issuance of US$37.3bn from 13 issuers, of which seven were HY.

Moreover, last month's was the lowest issuance in a January for six years, having fallen below the recent low in 2019 of US$18.5bn. 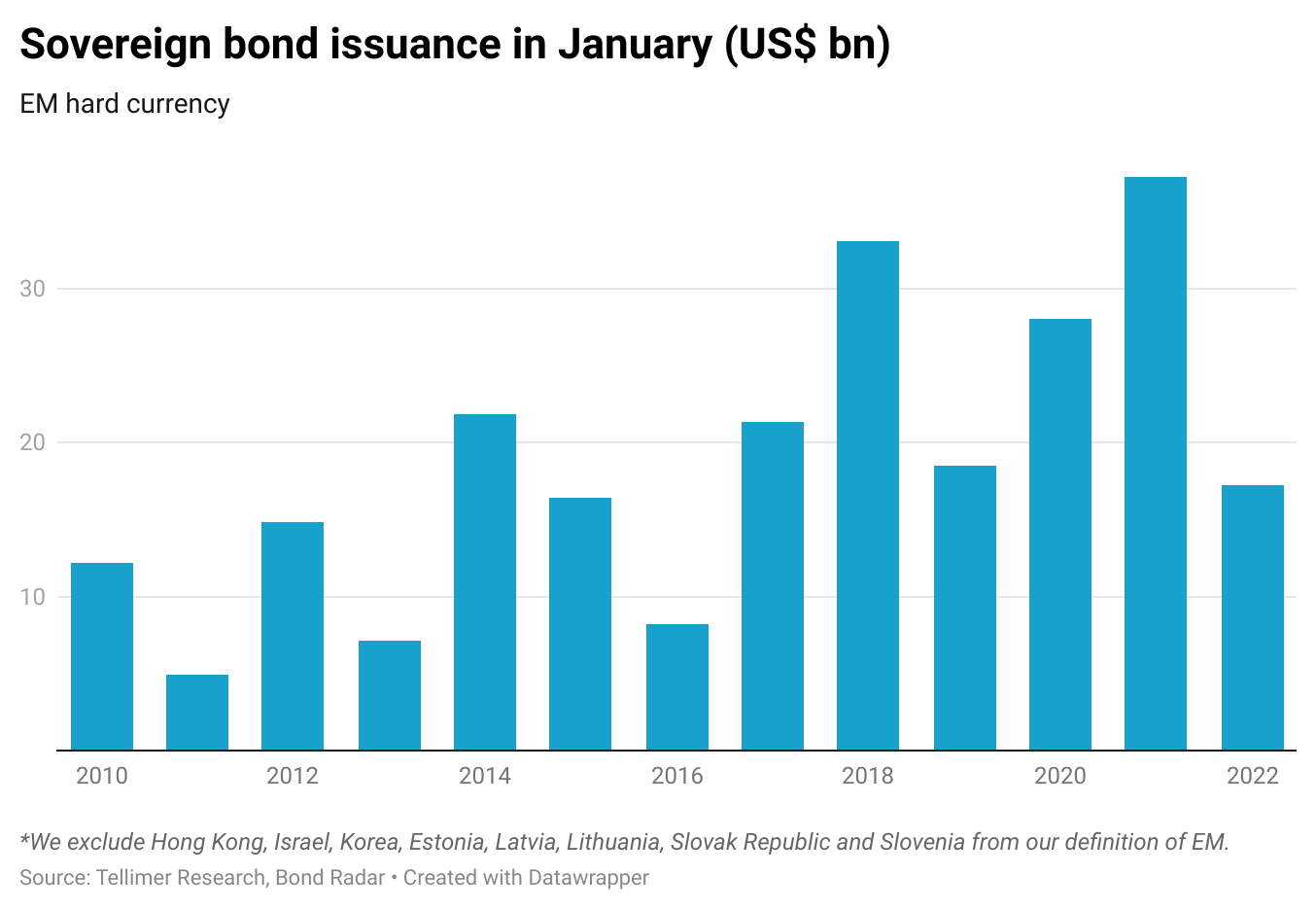 Notwithstanding the slow start to the year, further issuance may be in the pipeline. Within HY, Angola has talked about coming back to the market, although the timing is unclear, while El Salvador plans its Bitcoin bond in March.

However, the rise in US bond yields may dent EM issuance plans in the near term although, so far, EM spreads remain well contained. The spread on the Bloomberg EM Aggregate Index is 309bps (as of cob 31 January on Bloomberg), a modest 12bps increase YTD, although nominal EM yields have risen by 45bps to 4.76% as a result of the higher risk-free rate. The HY sub-index has seen a similar move, with the spread wider by 15bps (to 611bps) and the yield rising by 50bps (to 7.74%). The HY aggregate spread is therefore little changed, up 4bps on the month, to 298bps. 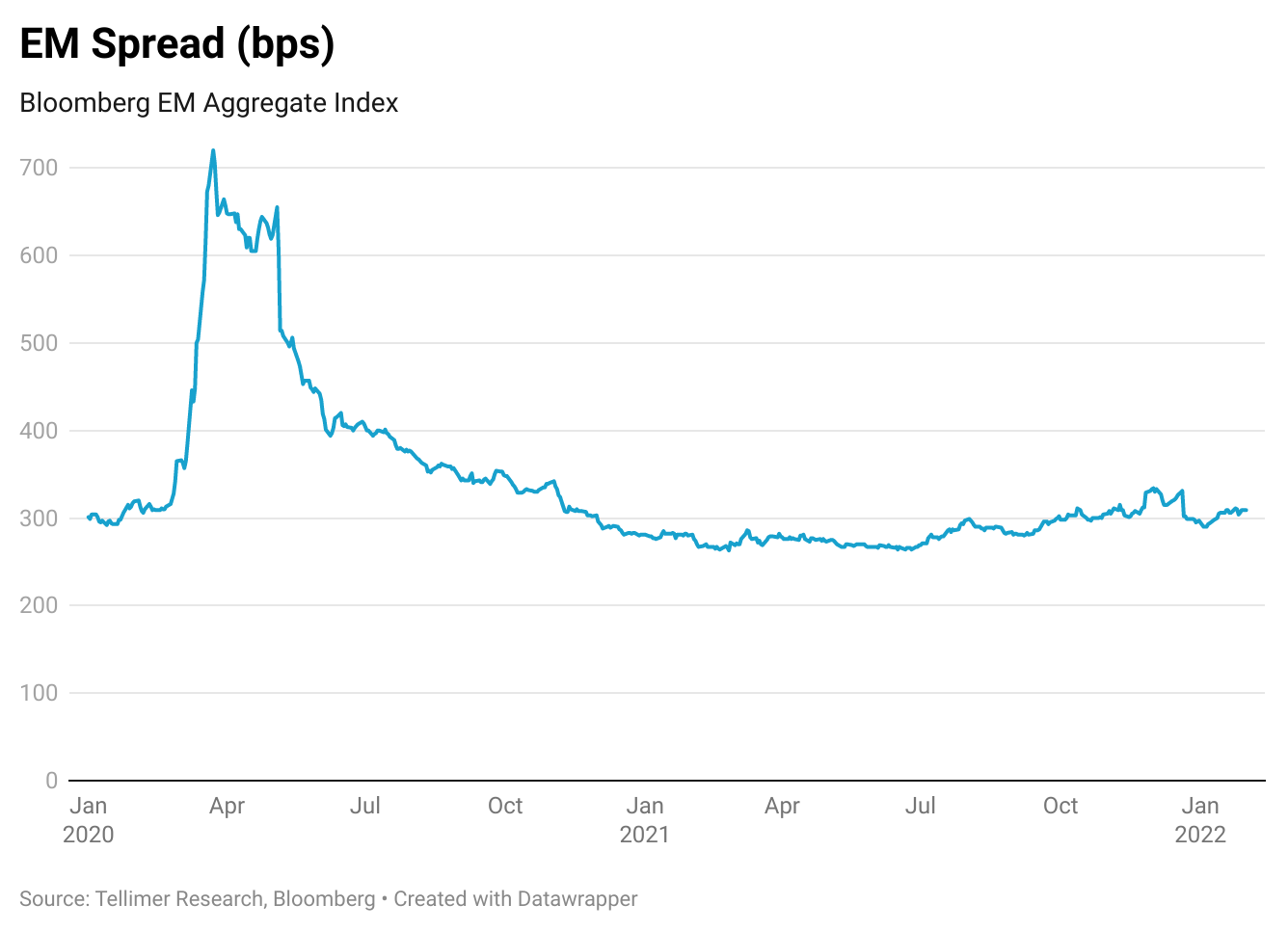