EM hard currency sovereign bond issuance rose for the second month running to US$8.2bn in June, +11.2% from the previous month (after another 11% rise in May), based on our calculations using data from Bond Radar. However, the subdued start to the year continued, with issuance down 59% from the same month last year.

It brings total issuance year to date to US$58.4bn. More tellingly, cumulative issuance YTD is running at 44% below the first six months of last year, as this year's twin external shocks of war and rates continue to weigh on the market and risk sentiment (although it is rates rather than war that is driving sentiment now). 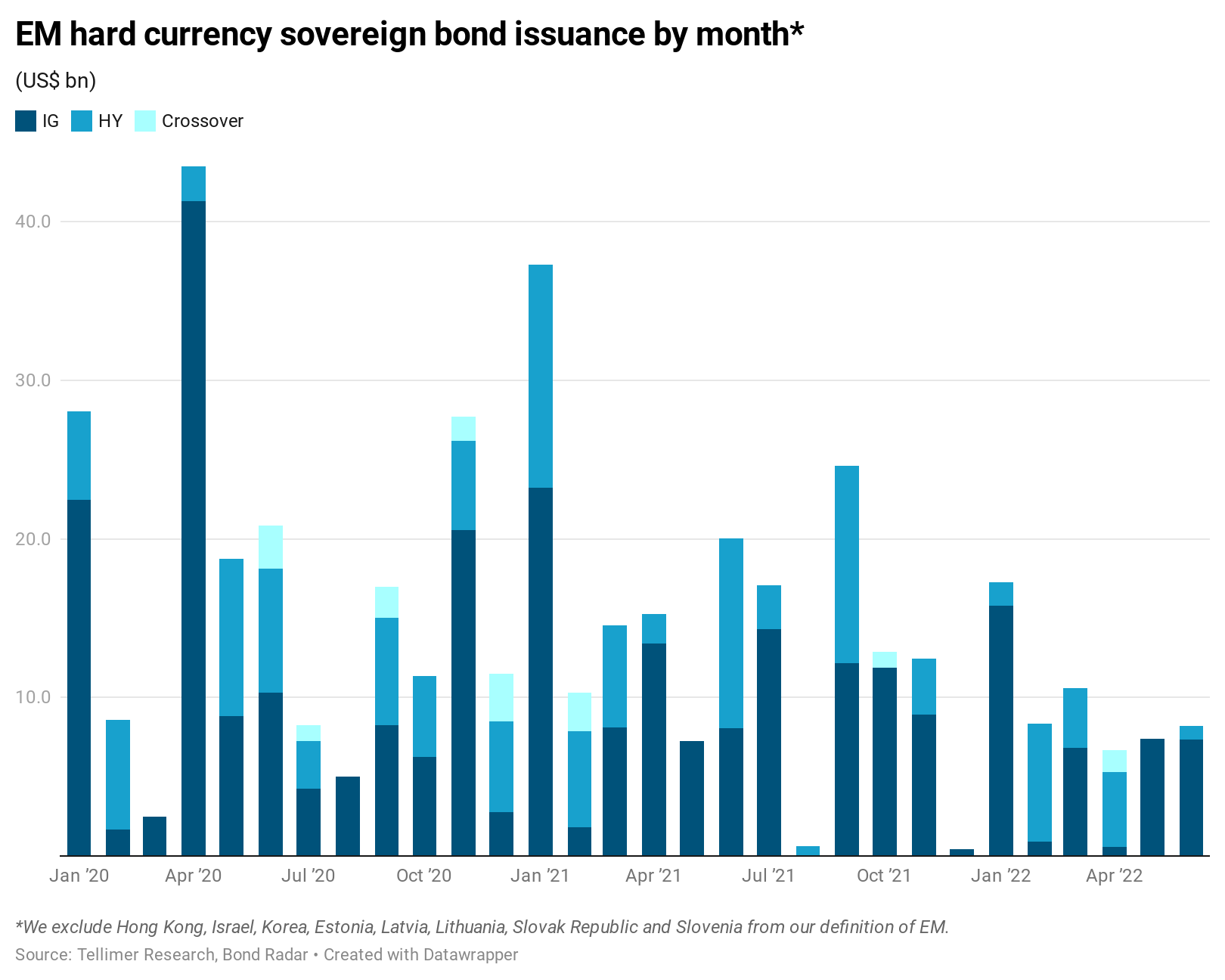 The overwhelming majority of issuance last month was in investment grade (IG), which it has been for the past two months, with relatively minor high yield (HY) issuance. IG accounted for 90% of June's issuance, and by volume – at US$7.4bn – it was at the same level as in May. HY accounted for 10% and amounted to US$844mn, compared with zero HY issuance the previous month.

Issuance, however, came from just five sovereigns, three IG (an Indonesia four-tranche JPY deal, a triple-tranche Hungary deal in dollars and euros, and a dual-tranche dollar deal from the UAE) and two HY (the Bahamas and Jordan). The HY deals, which took place early in the month (Jordan on 8 June and the Bahamas on 9 June), amounted to a total of US$844mn and were the first HY deals in two months, since South Africa on 11 April.

However, despite the more active month, the primary market even took a two-week pause in the middle of the month after market volatility increased around the Fed’s surprise 75bps policy rate hike on 15 June, which triggered a severe market rout. Even the IG market shut, with the UAE deal on 23 June – the last deal of the month – coming after a two-week lull following the Bahamas deal on 9 June, and the previous IG deal (Hungary) on 8 June.

The issuance highlight undoubtedly was the Bahamas partially guaranteed bond issue, which consisted of two tranches. According to S&P, the Series A note (3.85% 2036) amounted to US$135mn with an Inter-American Development Bank (IADB) guarantee (covering principal and interest, up to an amount US$200mn). The Series A note was thus rated AAA (the IADB issuer rating). The Series B note (9% 2029) amounted to US$250mn and could benefit from any residual portion of the IADB guarantee – our issuance data only includes the non-guaranteed portion (the Series B tranche). The Series B note was thus rated B+ by S&P, in-line with the Bahamas issuer rating, and was priced to yield a hefty 13.5% (compared with secondary market yields ahead of final pricing of c13% on the '32s). The structure, and high yield on the unguaranteed portion, illustrate the Bahamas' challenging financial situation, and, while the issuance goes some way to meeting the country's external financing needs this year, market concerns have not gone away. Indeed, yields on the '32s have risen further (to 15%), with the bonds down c8pts (from US$78 to US$70) since the primary deal.

In fact, EM sovereign bonds in general had a very difficult month – the worst month since the pandemic – amid the market sell-off due to the global inflation scare and larger-than-expected Fed rate hike, which hit most risk assets (as well as more hawkish action from other major country central banks, too).

The total return on the Bloomberg EM Sovereign USD index was -6.3% in June, its worst month this year, and worst since March 2020, and coming after a flat performance in May (its best this year). The yield rose by 95bps on the month to 7.87%, while the spread rose 75bps to 474bps. It brings the total return YTD to -20% with the yield having risen by 302bps this year and the spread up by 137bps. 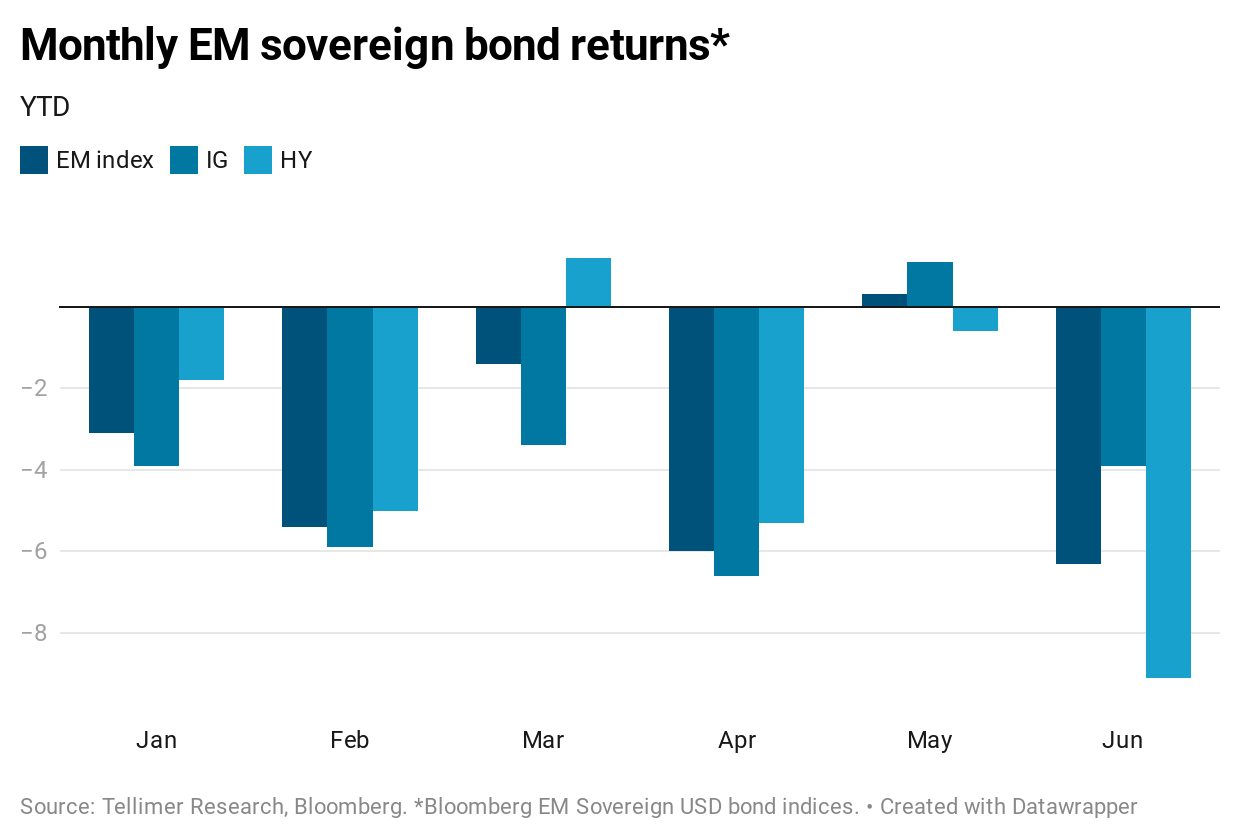 HY outperformed IG on the downside in June, with a total return of -9.1% on the Bloomberg HY subcomponent compared with -3.9% on the IG portion, although both have delivered a similar return YTD (IG -20.7% and HY -19.2%). 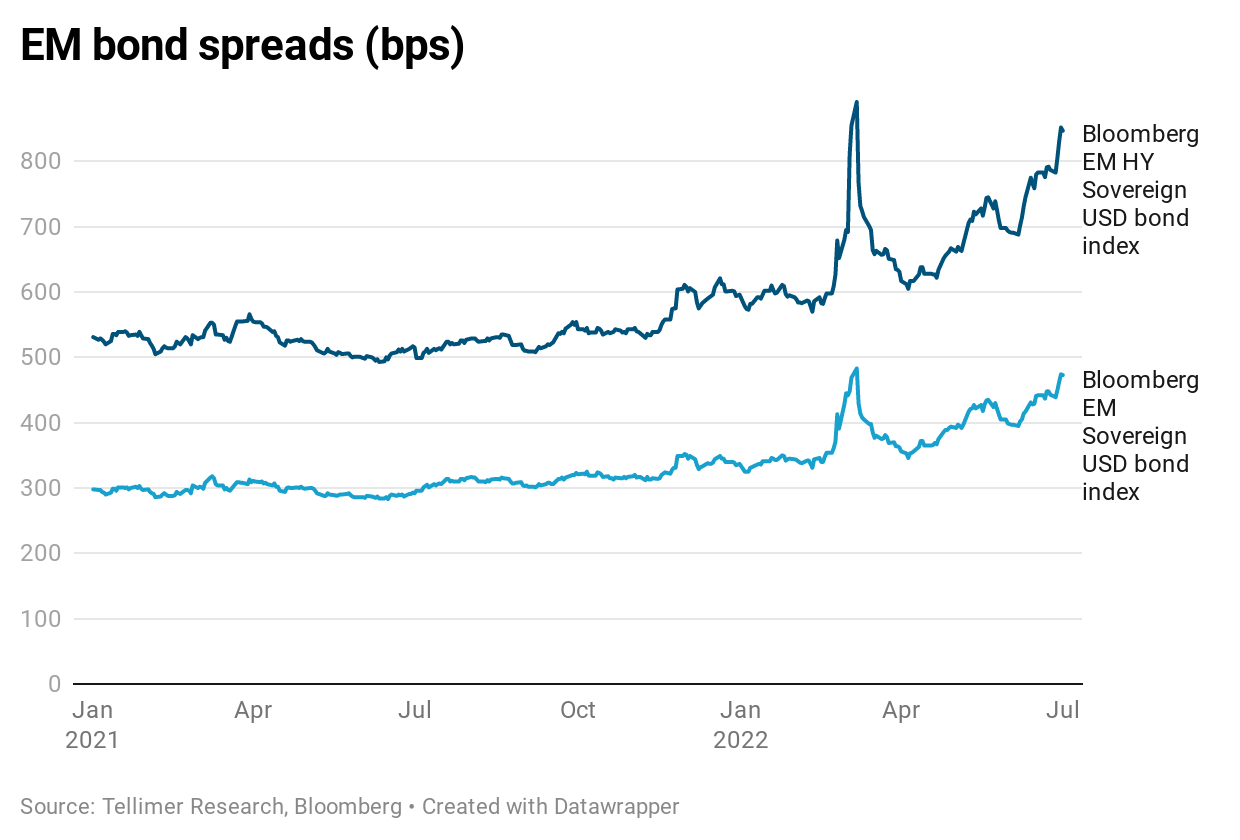 Moreover, while spreads are now back to their wides for the year, close to the peak seen in the immediate aftermath of Russia's invasion of Ukraine, investors remain concerned that further declines are possible. This could weigh on issuance plans in the coming months and with markets closed for many HY issuers – especially frontiers, and much of Sub-Saharan Africa in particular – this could pose a challenge to meeting this year's funding needs. For instance, one-fifth of the index is in distress, while we count 28 countries with yields on their sovereign dollar bonds over 10%.

This could force more countries to the IMF (and other multilateral lenders), following Ghana's lead, to bilateral partners, or to consider more creative financing structures (like the Bahamas), or they will be forced to tighten policies, or to resort to potentially inflationary domestic financing, sharp exchange rate adjustments, capital controls or – in the limit – default.