EM sovereign bond issuance grinds to a halt in July

There was no EM hard currency sovereign bond issuance at all in July, based on our calculations using data from Bond Radar, the first nil month since December 2019 and only the sixth over the past ten years, on our count. Hence, while zero months are rare, this is not unprecedented, although most previous episodes (three of the past five) have generally reflected seasonality (August and December) rather than anything else. Perhaps, in this case, a better comparison is the nil month of June 2013, in the wake of the first taper tantrum episode.

That July 2022 was the first nil month since Covid may also sound surprising, given the market closure at the onset of the pandemic in March 2020, although then there was a period of a few weeks without issue but not on a calendar month basis. And over the past twelve months or so, there have been a few months (August 2021 and December 2021) when issuance was low but not zero (although seasonality also applied then).

It means total issuance year to date is unchanged from the US$58.4bn we recorded in June, and extends the subdued year so far that we have already observed. It also means the run-rate year to date has also fallen further, with cumulative issuance through to July running 52% below the first seven months of last year (compared to 44% below in the first six months), as the twin external shocks of war and rates continue to weigh on the market and risk sentiment (although it is rates rather than war that is driving sentiment now). 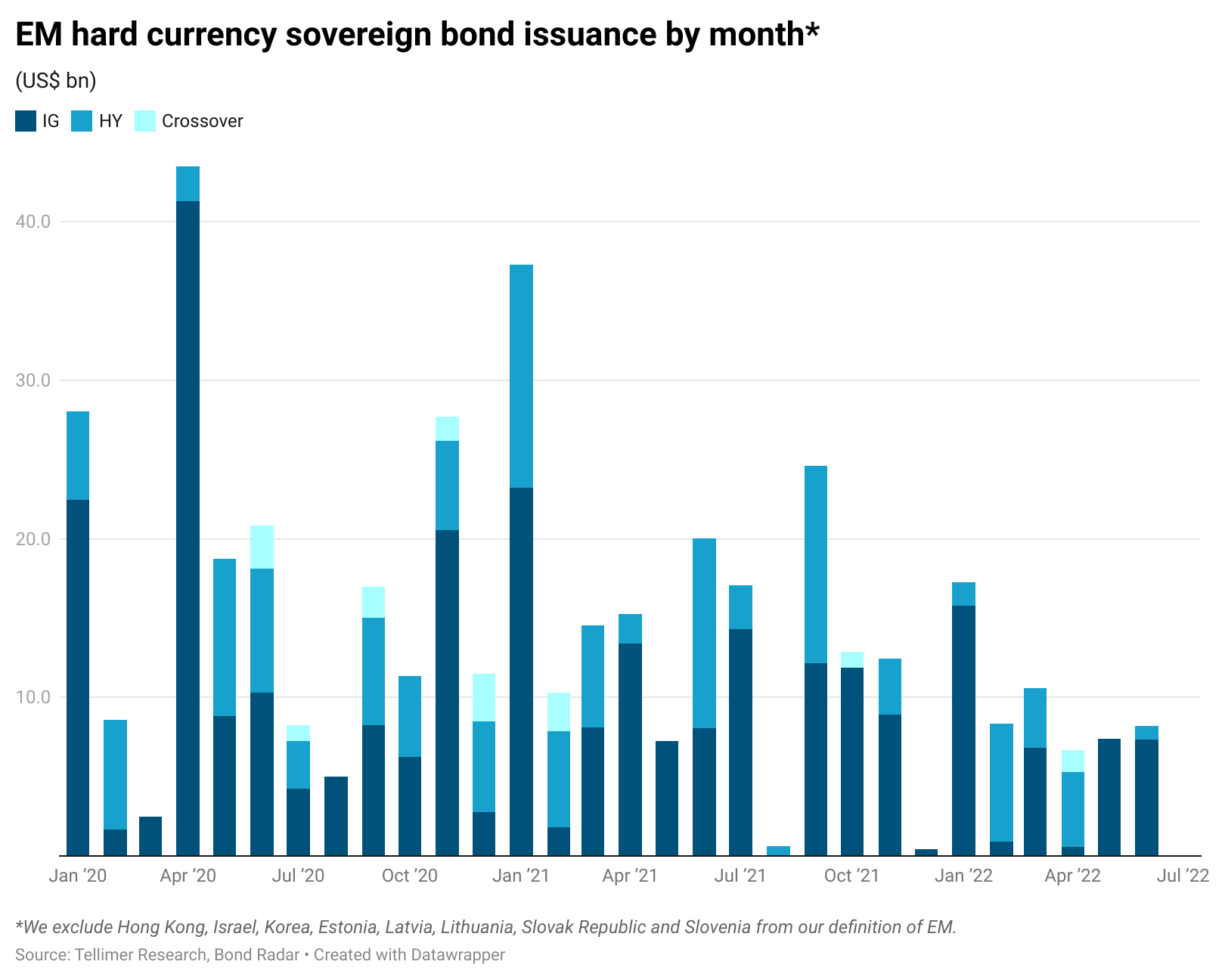 Of course, we are now entering August, so seasonality means we could be in for another month of low (or zero) primary activity. This could mean September could be a bumper month, with pent-up supply waiting until then. Or, if issuers feel they cannot wait, and perhaps taking advantage of the modest easing in credit conditions seen in the last week or so, perhaps they will buck the traditional holiday lull and seek to issue in August, especially if they fear more market volatility will return later in the year.

Still, the fall in EM sovereign issuance mirrors the wider market. S&P said in a report last week that it expected global bond issuance to fall by about 15% this year, to US$7.7trn, compared to US$9.1trn in 2021. However, part of the fall is due to unusually high issuance post-Covid in the past two years. Still, the size of the expected decline is bigger than it had previously anticipated; it had previously forecast a 5% decline.

However, EM sovereign bonds did have a better month in July, or rather they finished the latter half of the month strongly, notwithstanding the Fed's second abnormal 75bps rate hike, as investor focus switched more firmly from fear of inflation to recession (and hence pricing-in an increasing likelihood of a lower peak in rates and earlier rate cuts) following the disappointing US Q2 GDP print. US 10-year bond yields fell 36bps in July to 2.65%, down from 3.01% at the end of June – their lowest level since early April, and a far cry from the 3.47% peak seen on 14 June (on a closing price basis on Bloomberg). This could provide a fillip to risk sentiment, and EM bonds, in the short-term, especially on limited holiday-season liquidity and renewed inflows.

The total return on the Bloomberg EM Sovereign USD index was 3.1% in July, after a bad June (-6.3%), with investment grade (IG) +3.9% and high yield (HY) +2.4%. In fact, after a flat month in May, it was the first significantly positive month this year. The positive performance also helped to recover some of the losses for this year, with a total return in the overall index of -17.7% ytd (compared to -21.9% earlier in the month). 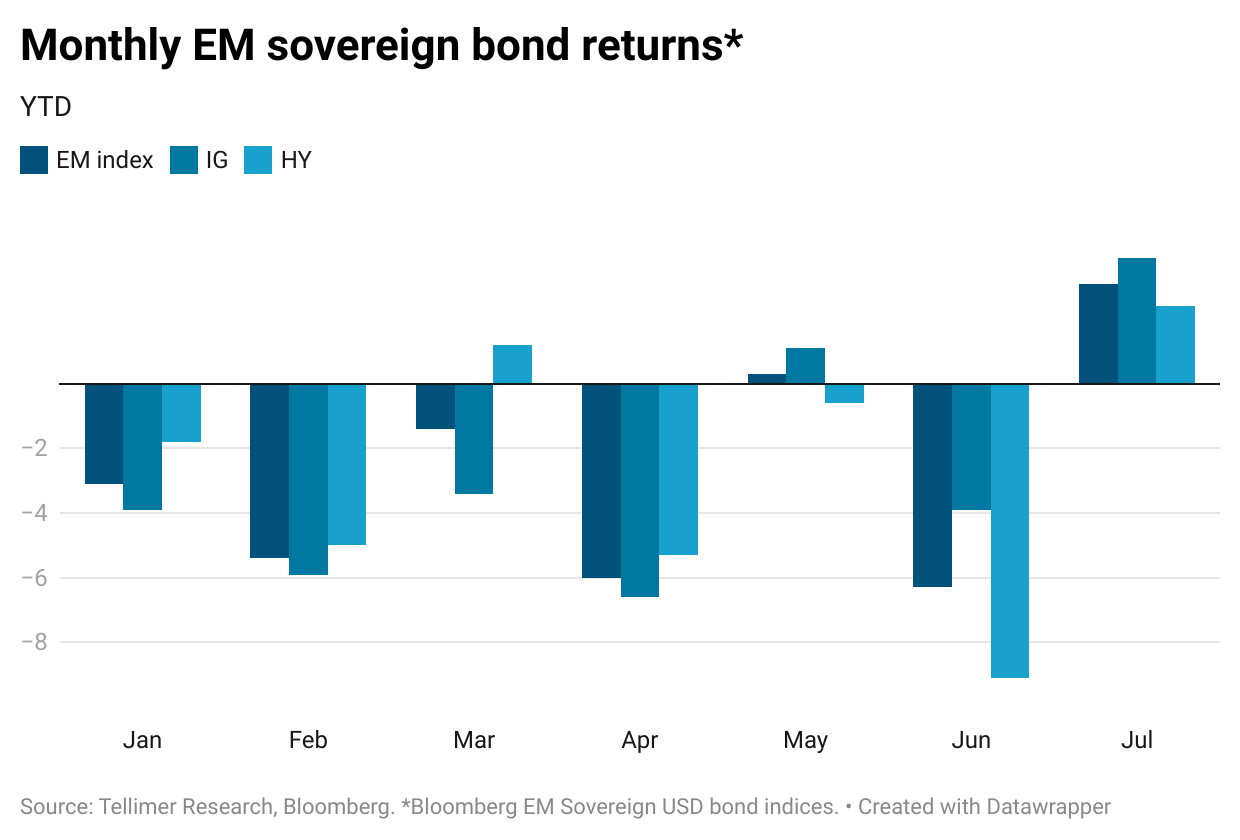 Moreover, the HY spread is some 350bps wide of its post-pandemic low of c500bps, some twelve months ago, with concomitant implications for the external financing conditions for high yield (especially single-B) sovereigns. Indeed, one-third of EM sovereigns are now priced in distress, which could present risk (or opportunity) in the remainder of the year. 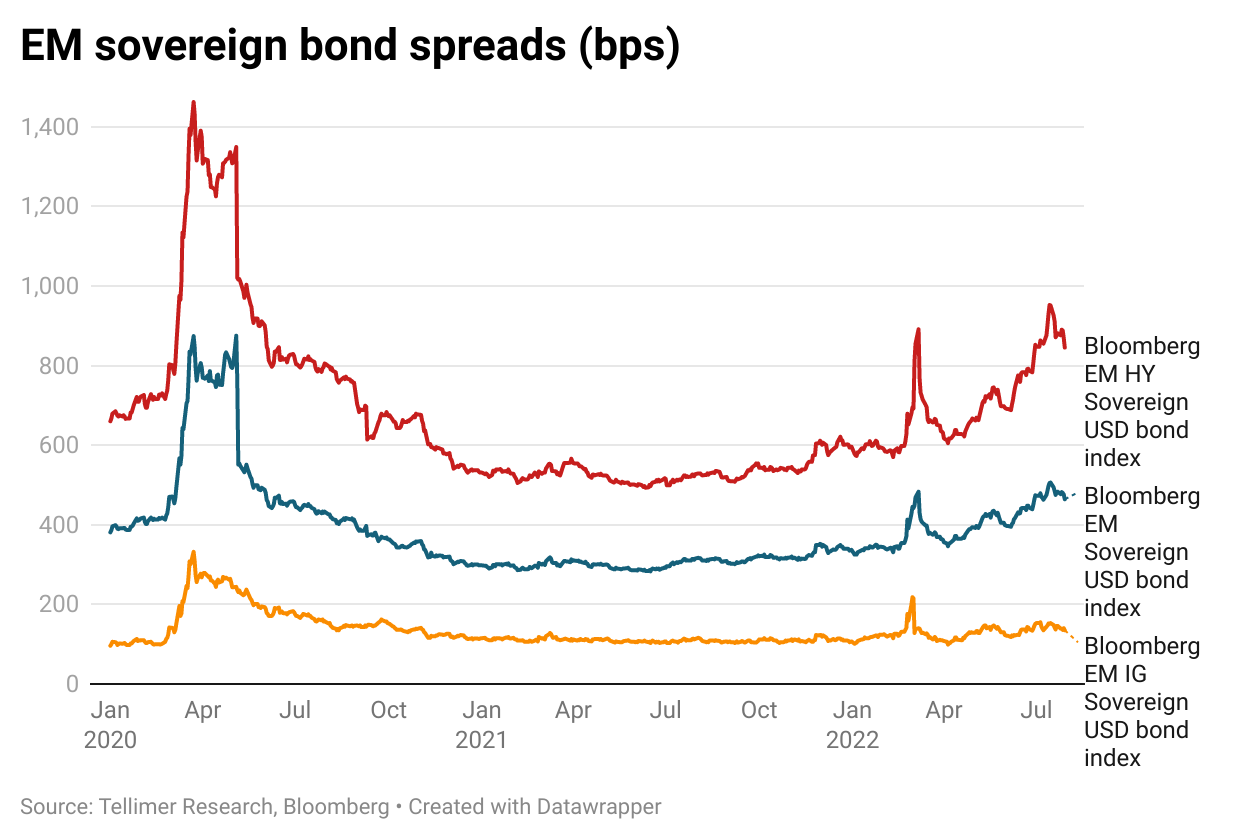