Sovereign bond issuance in emerging markets perked up towards the end of last month, after the primary market effectively closed for a time in the wake of Russia's invasion of Ukraine, although the relatively subdued start to the year continued. In fact, EM financing conditions were already challenging, given the rise in US bond yields, even before Russia’s invasion of Ukraine. They are even more challenging now, at least for some.

EM hard currency sovereign bond issuance ended March at US$10.6bn, although it was a slow start given the dearth of issuance early in the month due to the market's closure, based on our calculations using data from Bond Radar (issuance was even higher if we include Israel and Slovenia). This was a 27% increase on February. 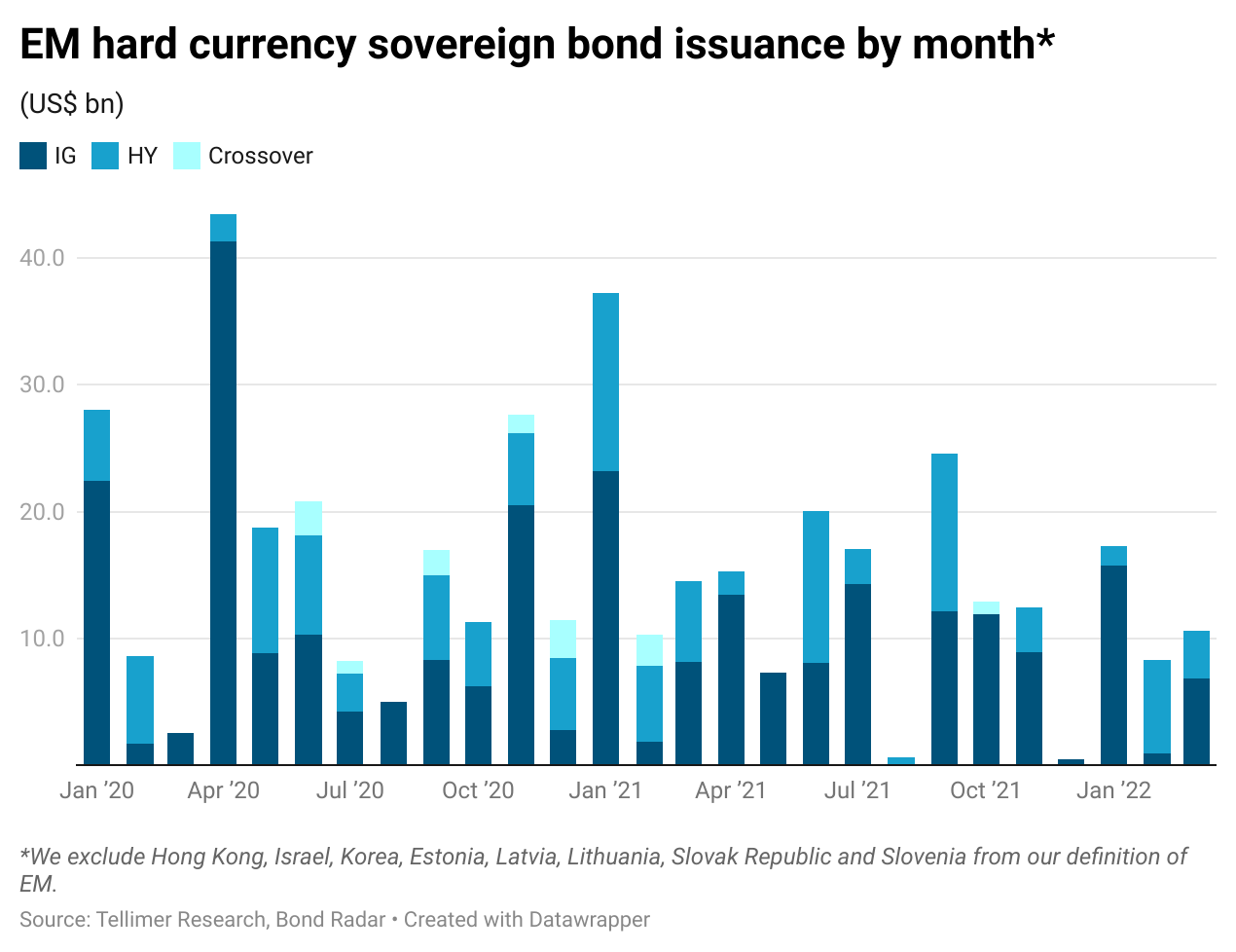 However, Q1 issuance was still its lowest in six years. EM hard currency sovereign bond issuance was US$36.2bn in Q1, only about 60% of what it was in the same period last year, which was also a time when issuance dried up for a few weeks in early March due to the then taper tantrum concerns – although Q1 issuance last year was boosted by a strong January on the back of the Biden blue wave and Covid vaccine success (remember that?) risk-on rally. Even more remarkably, last quarter's issuance was 8% below the first quarter of 2020 (when the market effectively closed for a time due to Covid). You have to go back to 2016 for such a weak start to the year –when EM, and frontier markets in particular, were grappling with the hangover of the 2014-2016 oil price crash and resulting market dislocations. 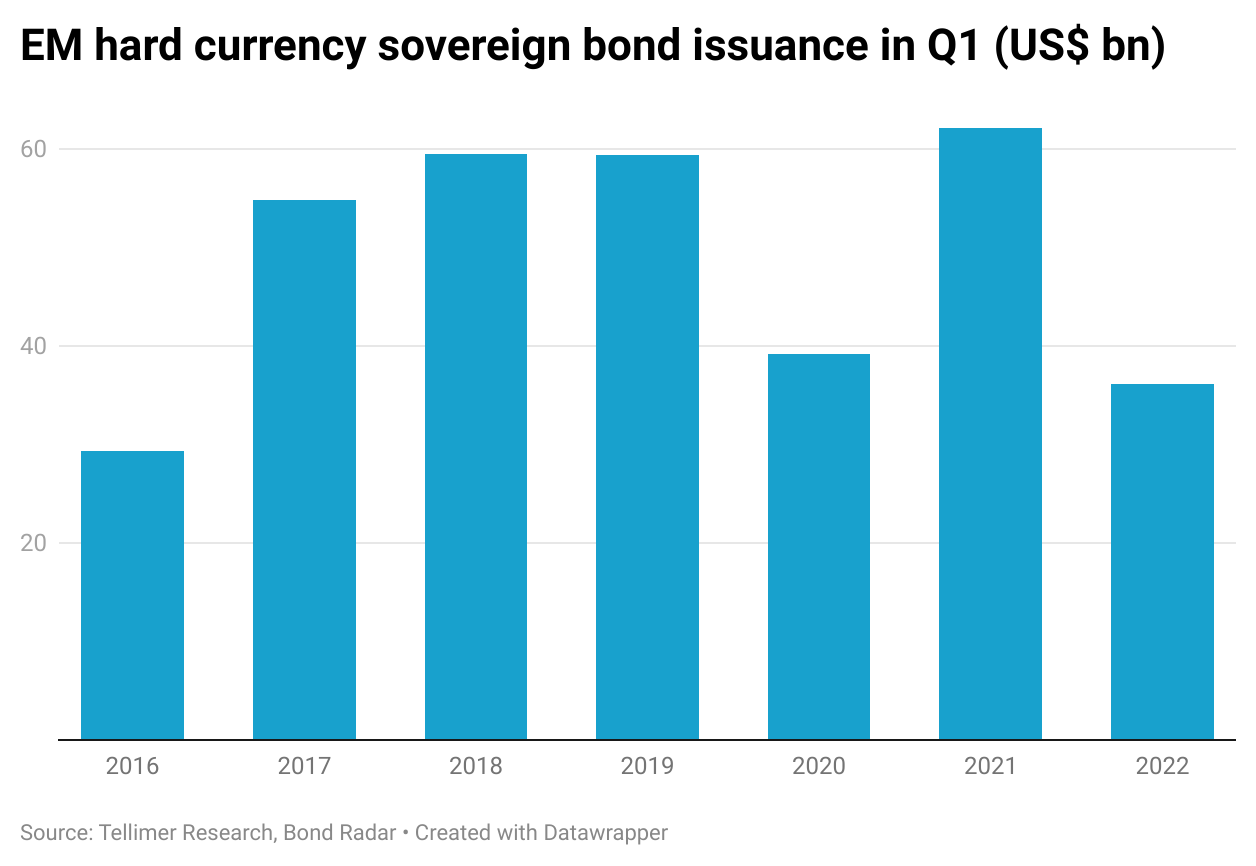 Within overall issuance last month, the bulk (65%) came from Investment Grade (IG) – although, by number of issuers, rather than volume, the split was more even (4 IG, 3 HY). High Yield (HY) accounted for the remaining share (35%). These issuance shares, by coincidence, were also repeated for the quarter as a whole. The rebound in IG followed a quiet February, which saw just one IG deal that month (Mexico), on our definition. Hence HY dominated the limited amount of activity for a time.

But March was a story of two halves, caused by Russia's invasion of Ukraine. The primary market was essentially closed for three weeks from Bolivia's sale on 23 February, just before the war started, until mid-March (bar Chile's issuance on 2 March) when Turkey and, more surprisingly, Nigeria came to the market. That it was HY that first returned to the market was also noteworthy; which may be because IG issuers have more funding flexibility and could afford to wait, while HY do not have that luxury.

Turkey and Nigeria, however, signalled the market was open, albeit at a price for some issuers, and sparked others to return, albeit in limited numbers. Philippines and Indonesia also returned, which bar Chile, were the first proper IG deals since Mexico on 7 February, along with smaller deals from Egypt and Sharjah (UAE).

Together with Chile's issue at the beginning of March, there were therefore seven sovereign issuers during the month. That compared to just four in February.

However, looking ahead, the issuance calendar still looks sparse, although Angola (B3/B-/B-) stated its intention to come to the market with a 7-12 year dollar issue in conjunction with a US$750mn tender offer for the two bonds at the front of its curve (US$1.5bn 9.5% 2025 and US$1.75bn 8.25% 2028). Investor meetings start on 5 April and we think bondholders are likely to view the new issue and tender favourably. The tender element looks like prudent debt management, given the chunky size of those bonds, although they would still be quite large after the liability management operation (there is still time however to do more). On the new issue, we suspect investors would prefer a new long ten year, or even a 12yr, given the absence of an existing benchmark at that part of Angola's curve, providing it too doesn't have to pay up too much for it. The '29s trade at an 8% yield (z-spread 572bps) while the '48s trade at 9.6% (z-spread 742bps).

Meanwhile, El Salvador has postponed its planned Bitcoin bond due to market volatility.

EM bonds have also staged a bit of a recovery since the war-induced sell off, on hopes of a ceasefire or peace settlement (which we think is optimistic), and spreads are pretty much back to where they were before. And that's even with the market digesting the US Fed's more hawkish rate outlook (beginning with an expected 50bps hike in May and pricing in several rate increases this year, compared to only three expected at end-2021). Ten year US bond yields have risen 90bps this year to 2.40% (cob 4 April on Bloomberg).

The total return on the Bloomberg EM Aggregate Index is -5.3% since 18 February (ie before the war) and -9.2% YTD (to cob 4 April). The yield has risen 62bps since the war, and 130bps YTD, to 5.61%, although it is some 40bps below its post-war peak of 6.03%. The spread is, however, relatively unchanged, point-to-point, now flat since the war began and up just 14bps this year, at 311bps. The spread did, however, rise by 110bps to its post-war peak of 421bps in early March, but has since recouped all that and is back to where it was on 18 February before the war started.

The HY constituent has fared similarly, although modestly outperforming (falling by less than the aggregate index) in total return terms. The total return on the Bloomberg EM High Yield Index is -3.3% since 18 February and -6.2% YTD. The yield has risen 71bps since the war, and 134bps YTD, to 8.58%, although yields peaked at a post-war high of 10.26% (so that's a decline of 168bps since then). The spread is also relatively unchanged, point-to-point, up just 6bps since the war began and 13bps this year, now standing at 609bps. The spread did, however, rise by 243bps to its post-war peak of 846bps in early March, but has since recouped most of that (-237bps) and is now only 6bps wide of where it was on 18 February before the war started.

Hence, the relatively flat performance of spreads on both indices this year belies the volatility we've seen over this period. 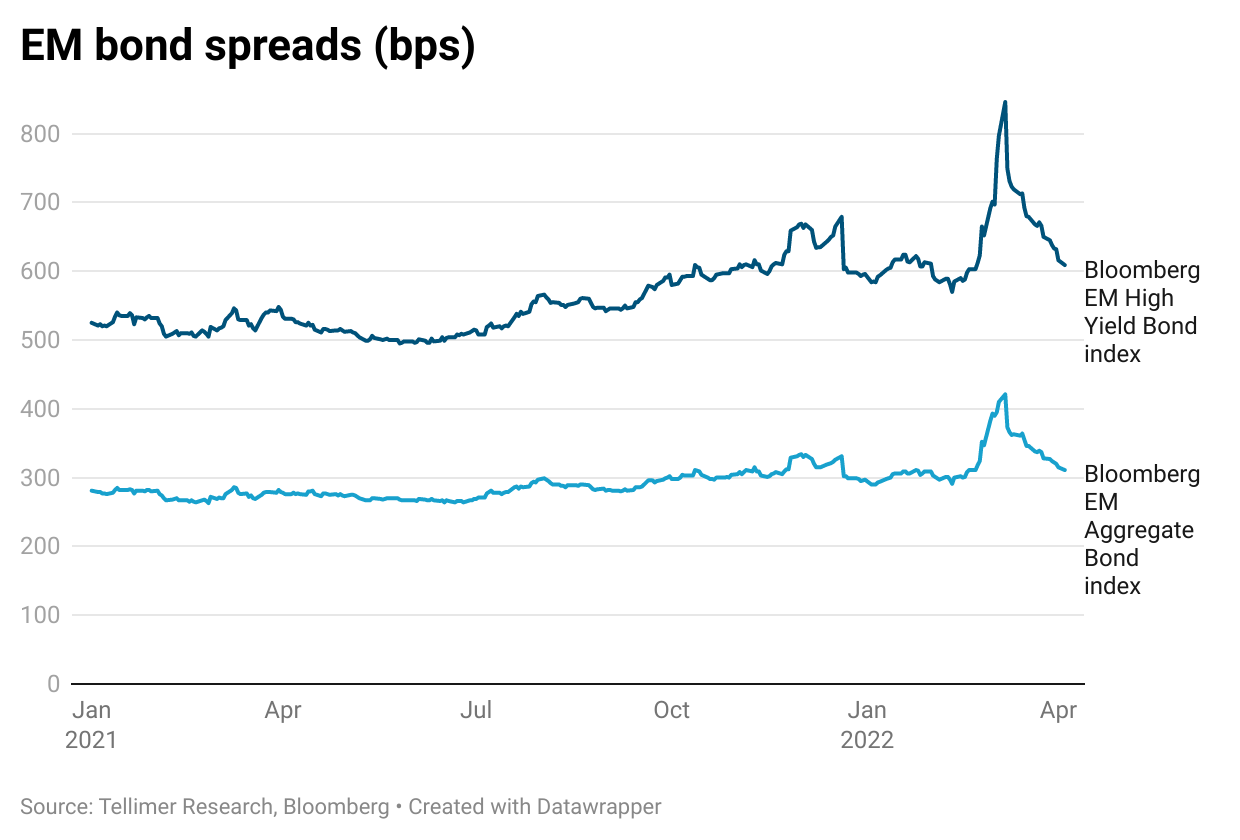 Moreover, not everyone has been able to participate in the EM bond market recovery (in spread terms) because of contagion from the Russia-Ukraine war to other countries' bonds (mainly the frontiers and LICs). Those countries farther away from the war, and some commodity and oil exporters, have tended to perform better. However, some commodity and oil importers, those with pre-existing vulnerabilities, and those more closely linked to Russia have seen their bonds perform more poorly.

It has also led some countries to turn to the IMF for support, or hasten their interest, including Egypt, Sri Lanka, Georgia, and Tunisia (although some requests for support pre-date the war, and some were needed anyway).