Some emerging markets digital payments companies have achieved considerable scale via the development of robust and sustainable business models. They have successfully raised private funding to support their early-stage growth and are now actively looking at public listings to further fuel their expansion.

In our earlier report, we profiled seven emerging markets fintechs with plans to list this year. Here, we focus on the EM digital payments space and present 12 digital payments companies that are looking to list their shares over the coming years. These transactions will increase the opportunity set for investors in listed equities and could also be candidates for pre-IPO investments. 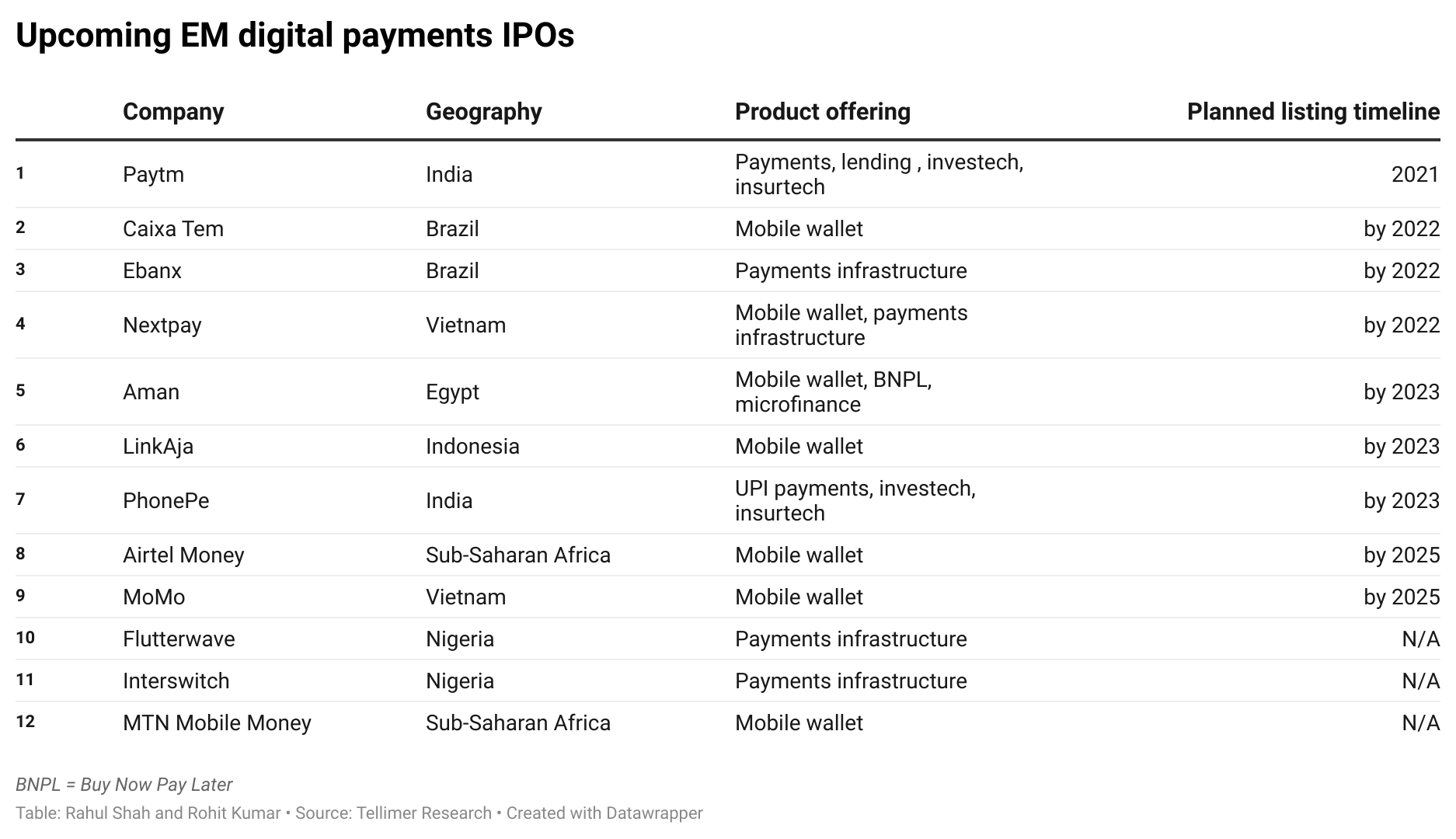 Fundraising is an important strategic priority for large fintechs

Based on the results of our global EM fintech survey, fundraising is a much more important strategic priority for unicorn fintechs than for non-unicorns. We think this is because the largest fintechs recognise that building sustainable competitive advantage (large customer base, superior technology, strong branding and so on) typically requires significant investment.

Scale is particularly important for payments firms; their products typically exhibit strong network effects. This mindset may explain these payment firms’ willingness to endure the increased scrutiny a public listing entails; the resulting funding injection could help them put distance over their rivals. 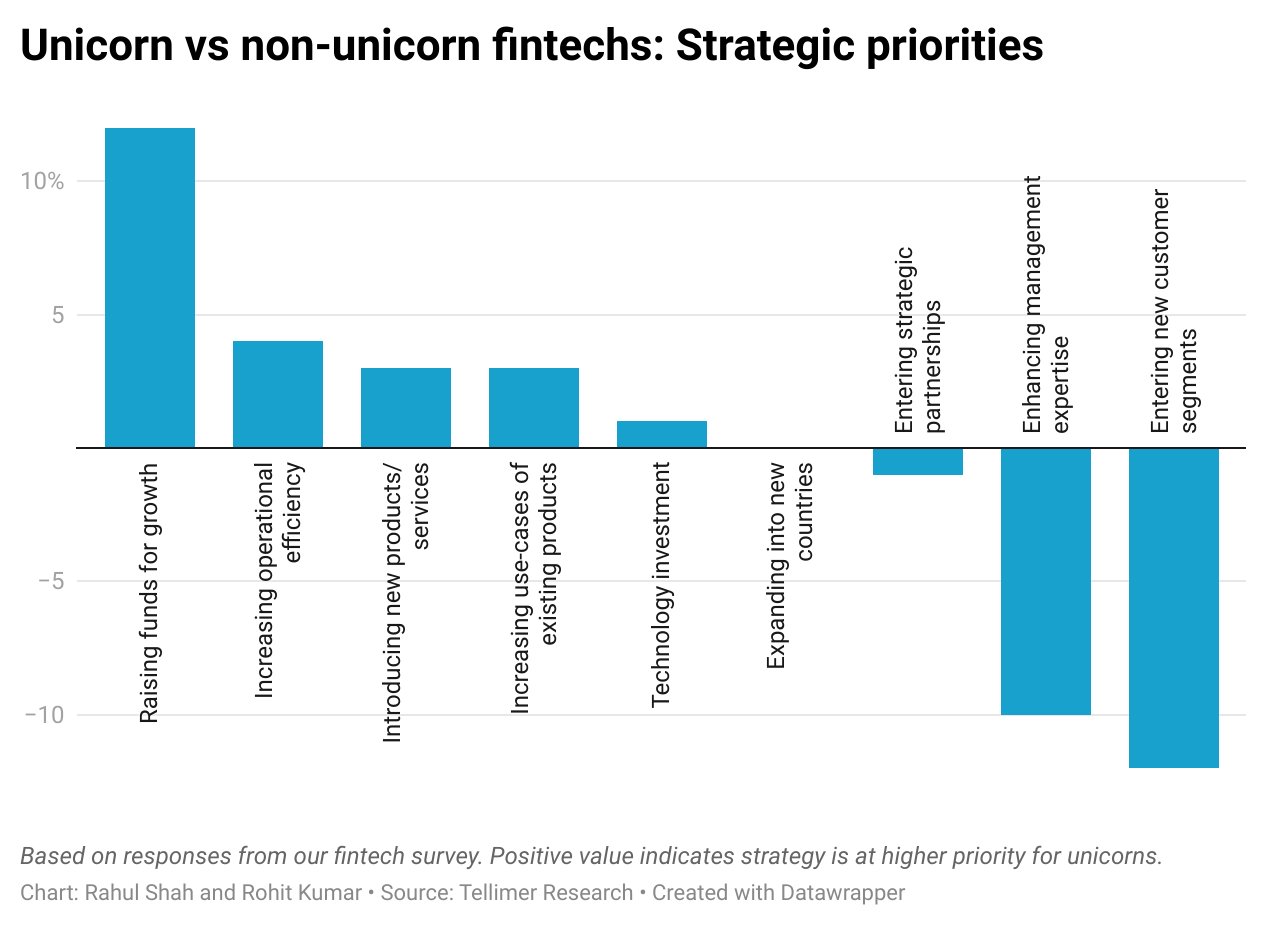 Paytm is one of India’s leading financial technology platforms, operated by One97 communication. It was founded in 2009 by Vijay Shekhar Sharma and has high-profile global investors as shareholders, including Ant Group, SoftBank and Berkshire Hathaway. Paytm started as a mobile wallet but has now diversified into various other products, like payments gateways and lending for merchants (Paytm for Business), investments (Paytm Money), insurance (Paytm Insurance), e-commerce (Paytm Mall) and gaming (Paytm First Games).

Paytm currently has 150mn monthly active users that are carrying out 1.2bn transactions per month. It has 20mn merchant partners in its payments gateway business. Its investment platform, Paytm Money, is now one of the largest and fastest-growing investment platforms in India, with a userbase of 7mn. Paytm Money has also ventured into stockbroking.

During the year-ending March 2021, Paytm revenues shrank 10% to US$380mn, due to pandemic-related disruption in H1, while H2 saw a strong recovery, according to the company. Net losses fell in FY 2021 by 42% to US$230mn as the company cut down on marketing expenses.

Paytm plans to list its shares in November 2021, aiming to raise US$1.6bn at a valuation of US$25bn-30bn, receiving approval from its board for the listing. The company's last funding round in November 2019 valued it at US$16bn.

Caixa Tem is a digital arm of the state-own lender Caixa Economica Federal. It has c70mn users, the majority of whom were added recently as the government decided to use the platform for emergency payments during the Covid pandemic. Management expects to retain c40mn of these users in the long run, as the government plans to continue to use Caixa Tem to pay under other social programs.

Caixa has recently launched micro-lending services and plans to offer insurance products in the future. The company intends to have a US listing in 2022 by selling a 15% stake.

Ebanx, founded in 2012, is a Brazilian digital payments infrastructure company that facilitates cross-border payments. The company has recently launched Ebanx One, a one-stop solution for global merchants to connect with Latin American customers. This is similar to dLocal’s business model, which attracted strong investor interest in its recent IPO, although Ebanx is only focused on Latin America, while dLocal has a broader emerging markets presence.

Ebanx already has some high-profile global customers on board, such as Uber, AliExpress and Spotify. It also operates Ebanx Go (a digital wallet) and Ebanx Pay (a complete payment solution for local merchants).

Ebanx recently raised US$430mn from Advent International to fuel its Latin American expansion, and is also planning to launch a US IPO soon.

Nextpay is the product of a merger between e-wallet service provider Vimo and point-of-sale startup mPOS, both of which were founded in 2014 by the incubator NextTech. Nextpay provides exposure to both the payments infrastructure opportunity in Vietnam (over 40,000 POS deployed) and a consumer-oriented mobile wallet business (1.5mn wallet users in 2019).

Nextpay has recently launched Next360, which is a comprehensive suite of digital offerings for MSMEs (micro, small and medium-sized enterprises). Under Next360, the company offers various services including NextShop (e-commerce), NextAcc (accounting software) and NextHR (human resource management). It has also invested in three start-ups: PosApp, MySpa and MegaBi. Nextpay plans to expand into Indonesia and Myanmar and is looking to list its shares by 2022.

Aman Holding is a subsidiary of Raya Holding, a leading IT investment conglomerate in Egypt. Aman Holding has three main arms:

Aman Holding has certain other initiatives in the pipeline, which include a securitisation licence and building another SME financing entity. Recently, Raya Holding has sold a 24% of stake in Aman to National Bank of Egypt, valuing the company at EGP1.76bn (US$112mn). Aman Holding also expects to go public in the next two years.

LinkAja is a state-owned electronic money platform that is operated by Firaya. It was established in 2019 as a joint venture between Telkomsel (Indonesia’s largest cellular operator) and seven state-owned banks. Telkomsel, Bank Rakyat, Bank Negara and Bank Mandiri each own 20% of the company.

PhonePe has 280mn registered users, of which 110mn are active, and it has a 17.5mn-strong merchant footprint. PhonePe and GooglePay have the largest market shares in UPI payments in India (c40% each). Flipkart recently span-off PhonePe as a separate entity and raised US$700mn from Walmart at a US$5.5bn valuation. The company plans to list its shares by 2023. 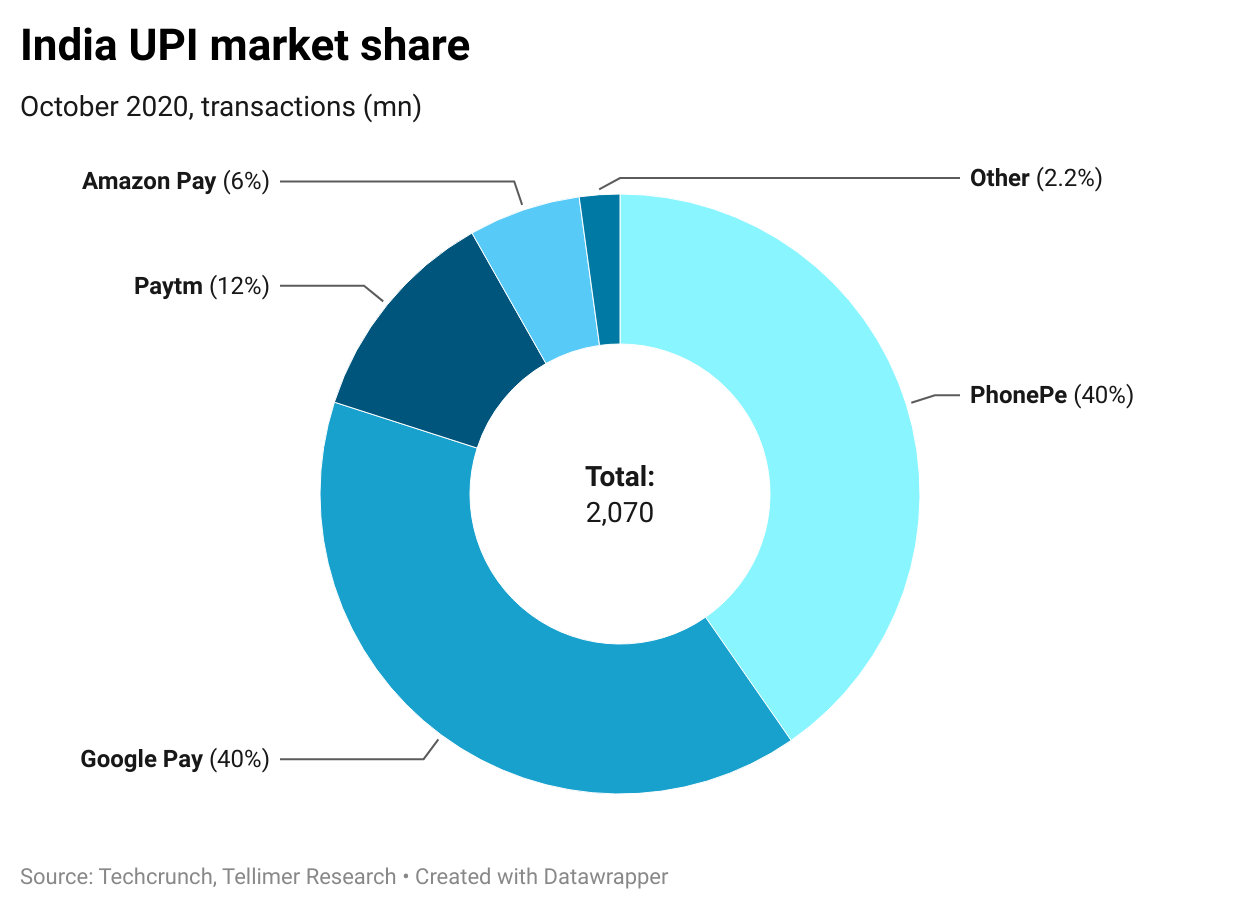 Airtel Money (also known as Airtel Mobile Commerce) is the mobile money arm of Airtel Africa, one of the leading telecom companies in Sub-Saharan Africa. Airtel Money offers digital payments, microloans, savings products and international money transfer services in 14 countries across Africa, with 80% of its userbase in East Africa.

The company had an active user base of 21.7mn users at March 2021 and processed transactions worth US$47bn in FY2021 (March year-end). Its revenue trajectory is also strong, with three-year revenue CAGR at 38%. Airtel Africa (the parent company) recently sold a minority stake in Airtel Money in two transactions (raising US$200mn by TPG and US$100mn by Mastercard) at a valuation of US$2.65bn. The company will use these funds to develop its sales and network infrastructure. It plans to list its mobile money arm within the next four years. 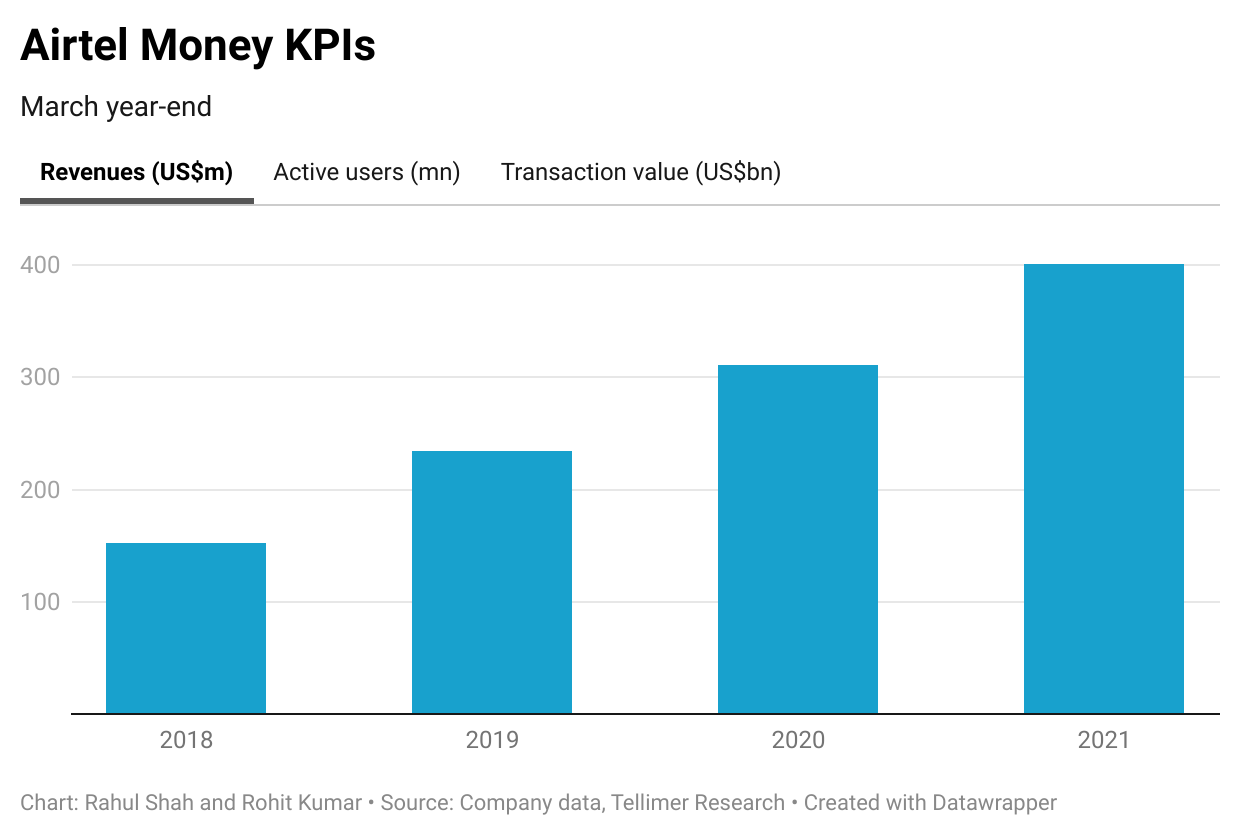 MoMo was founded in 2007 and is now Vietnam’s biggest e-wallet company, with over 20mn mobile wallets. It aims to reach 50mn wallets by 2023. MoMo processes cUS$14bn in annual transaction value.

MoMo began as a P2P payments company via a mobile wallet app, but has since expanded its offering into airtime top-ups, bill payments and merchant payments, with c100,000 payment points nationwide. It has also built a credit-scoring system that could allow it to expand into digital lending. Its investors include Standard Chartered, Goldman Sachs and Warburg Pincus. The company has announced that it plans to list its shares by 2025. 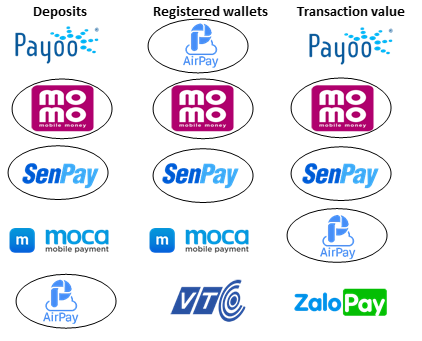 Flutterwave is one of Africa’s two unicorns, the other being Interswitch (see below), and, like Interswitch, it has plans to IPO in the coming years. Flutterwave was founded in 2016 and is a payments infrastructure company helping businesses accept payments in over 150 currencies. It is headquartered in the US but its major operations are in Africa. It has a presence in 33 countries globally, including 20 in Africa. The company is currently serving c300,000 businesses.

Flutterwave also operates Flutterwave Stores, which has 20,000 merchants selling their products on its platform. The company recently raised US$170mn at a valuation of US$1bn+ and it plans to use the funds to speed up customer acquisition in existing markets, improve its service offerings and launch new products like Flutterwave Mobile, which aims to turn merchants’ mobile devices into POS.

Interswitch is a Nigeria-based payments infrastructure company that commenced operations in 2002, pioneering the switching infrastructure needed to facilitate card payments. The company has since then transformed its offer towards integrated payment systems, facilitating payments through different channels, including innovative online payment solutions. Interswitch has also diversified geographically beyond Nigeria to other African countries like Uganda, Gambia and Ghana.

Interswitch had shown interest in going public in 2016 at London Stock Exchange, but these plans were delayed due to the economic recession in Nigeria at that time. The firm again tried to list in 2019, but instead opted for a further private funding round, which granted it unicorn status (ie US$1bn+ valuation), making it the first private firm on the continent to earn this moniker. The company still has plans to go public, but the fresh timeline for an IPO has not been disclosed.

MTN Mobile Money (MTN MoMo) is the mobile money service of MTN Group, the largest telecom company in Africa. It has operations in 15 countries with 46mn active users and is aiming to grow its user base to 100mn by 2025. MTN MoMo processed 6.5bn transactions worth US$150bn in 2020, with revenues of US$3.3bn.

MTN Group recently signalled its intention to sell or list its mobile money business to unlock value, with a targeted valuation of US$5bn. Our analysis suggests MTN MoMo could be worth US$5bn-6bn. 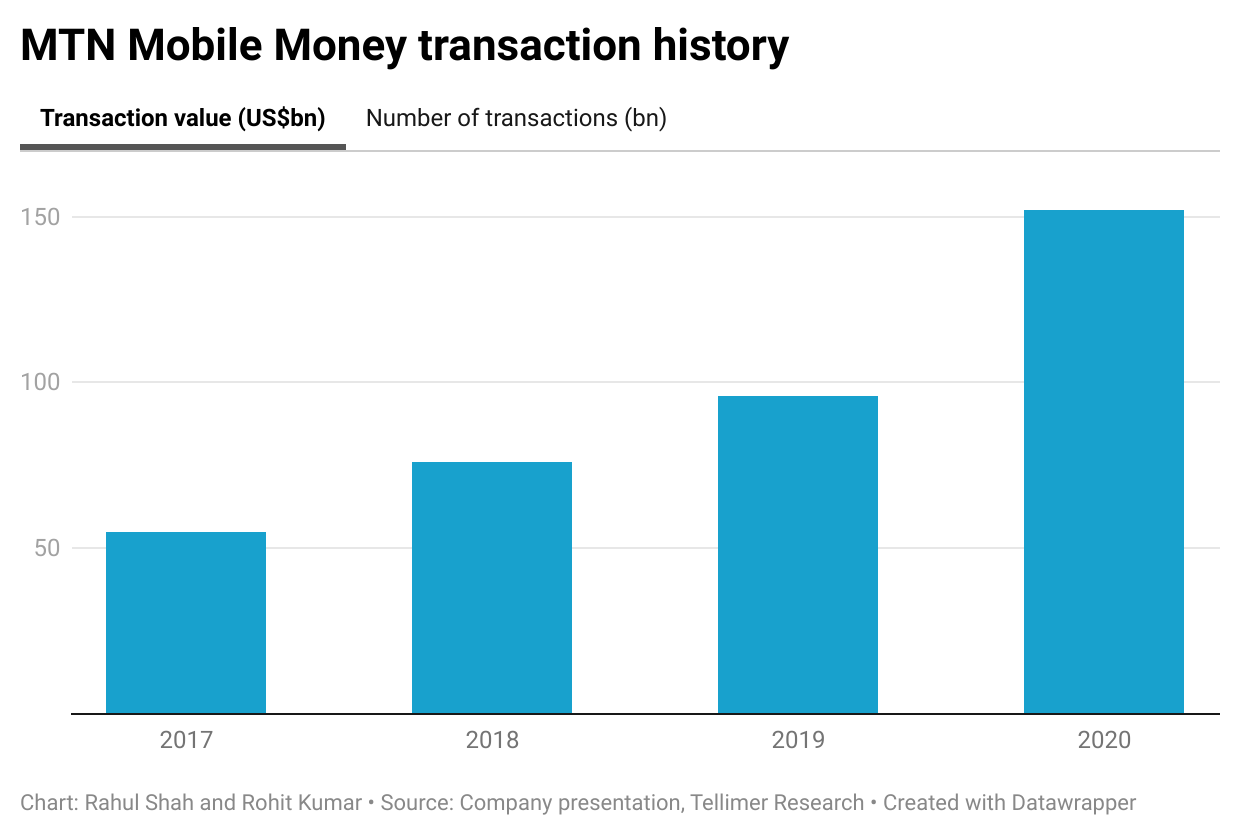