With inflation continuing to rise in both DM and EM, the word “transitory” has been thoroughly abandoned in the inflation debate. US CPI rose from 6.8% to 7% yoy in December (in line with expectations), and there has been a notable hawkish shift in the Fed’s rhetoric as officials hint at the potential for more than three rate hikes in 2022 as implied by the dot plot from the 15 December FOMC meeting (the market is now pricing in nearly four hikes of 25bps) and a faster taper of its asset purchase programme to stave off the risk of prolonged high inflation. 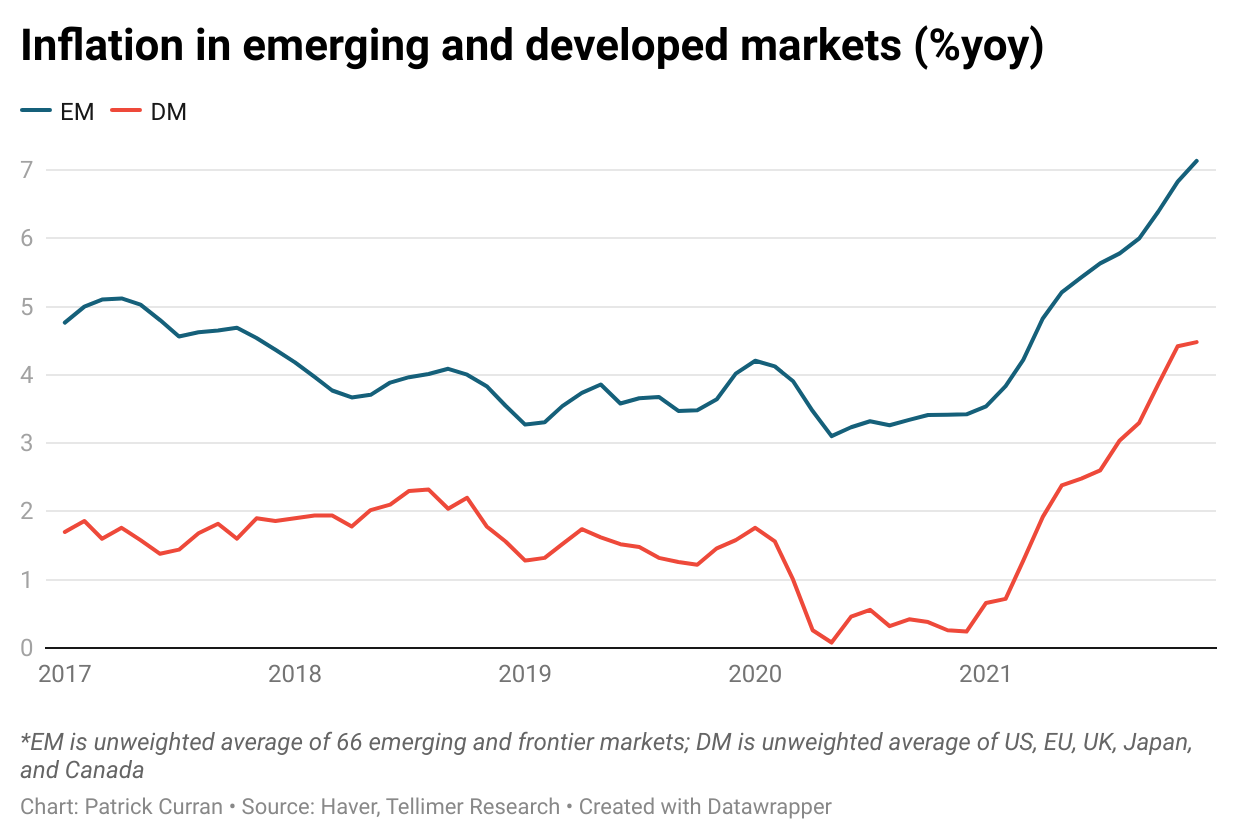 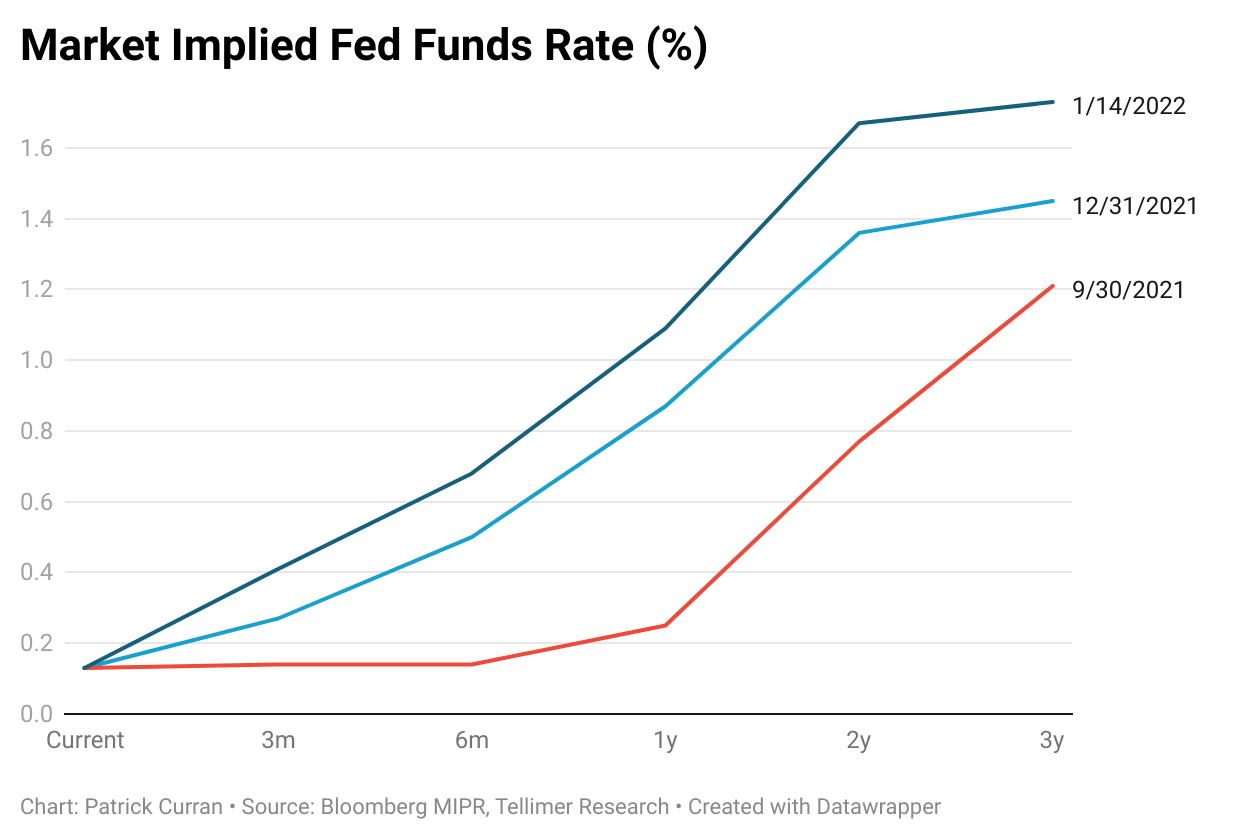 This has caused a sharp upward shift in US yields across the curve, with 2yr, 5yr and 10yr Treasuries all rising by c30-35bps ytd. The increase has been driven primarily by rising real rates, with inflation expectations remaining relatively well-anchored. Indeed, the 5y5y breakeven inflation rate has traded in a relatively stable 2-2.5% range for the past year and has actually declined by c16bps ytd, pointing to relatively stable longer-term inflation expectations even as it is expected to remain elevated over a shorter horizon (with the 2yr breakeven rate at c3.25% and 5yr breakeven at c2.85%). 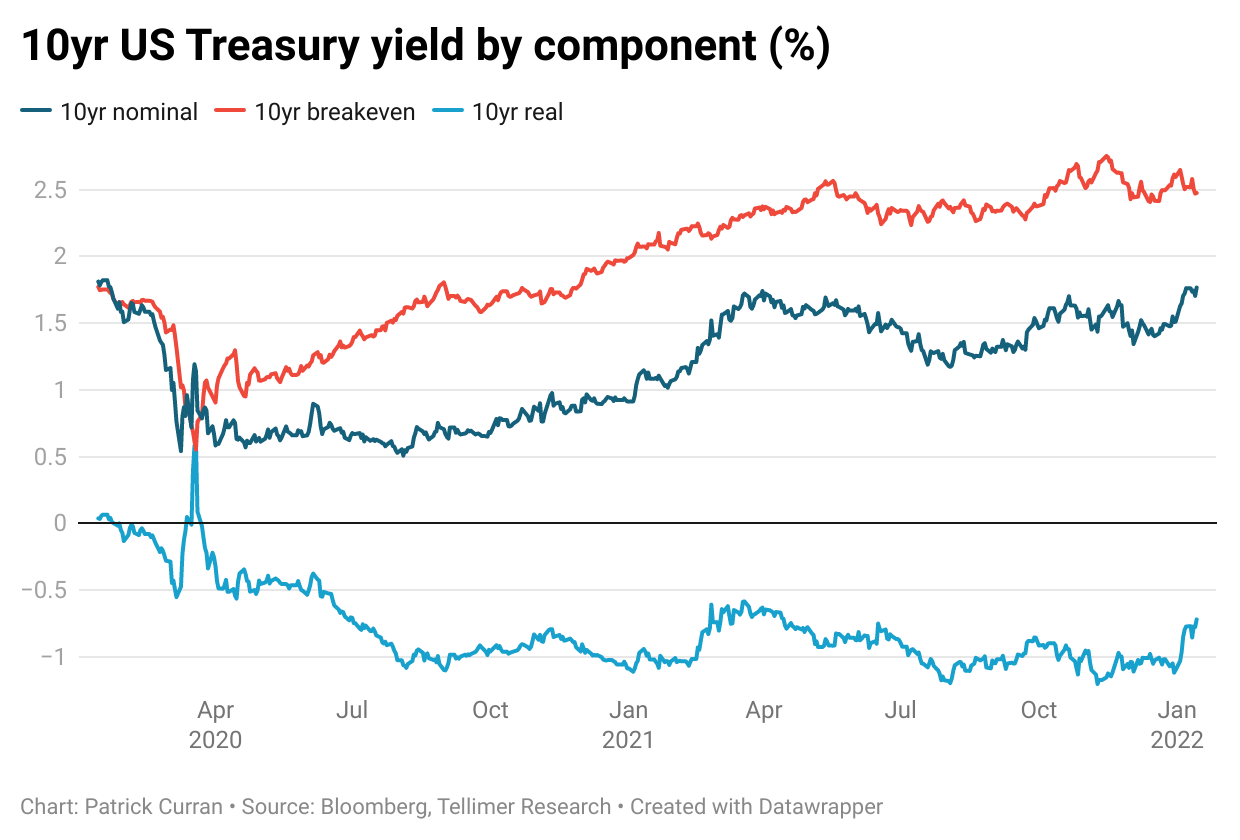 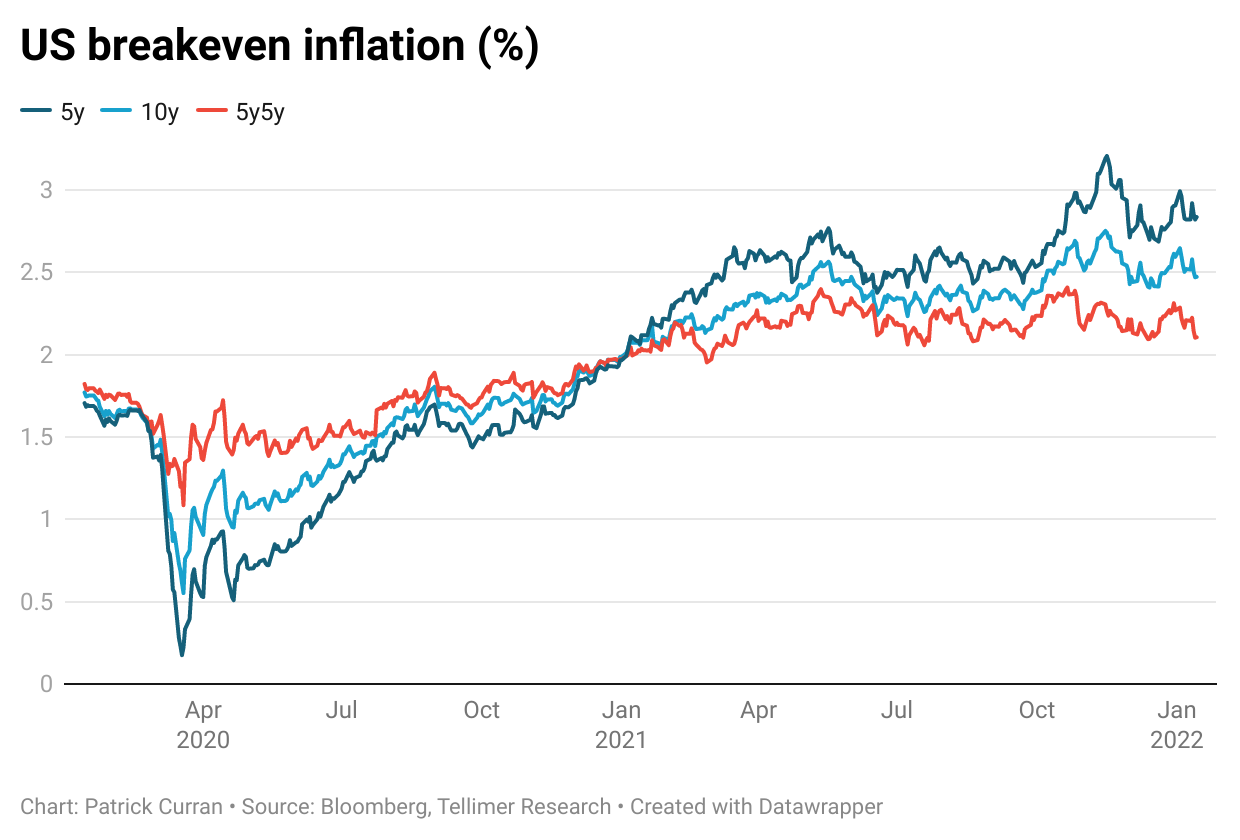 Towards the end of last year, we wrote that proactive monetary policy tightening by EM central banks would partially insulate EM currencies from DM policy tightening by increasing the real interest rate differential. And indeed, EM assets have held up relatively well despite the rise in yields, with local currency debt outperforming hard currency debt. The spread on the JP Morgan EMBI has risen by a modest 12bps ytd, but it is down by 2.7% in total return terms amid rising US yields. Meanwhile, the JP Morgan EM Currency Index is up 0.8% ytd and the MSCI EM Currency Index (measured in total return terms) is up 0.5%. 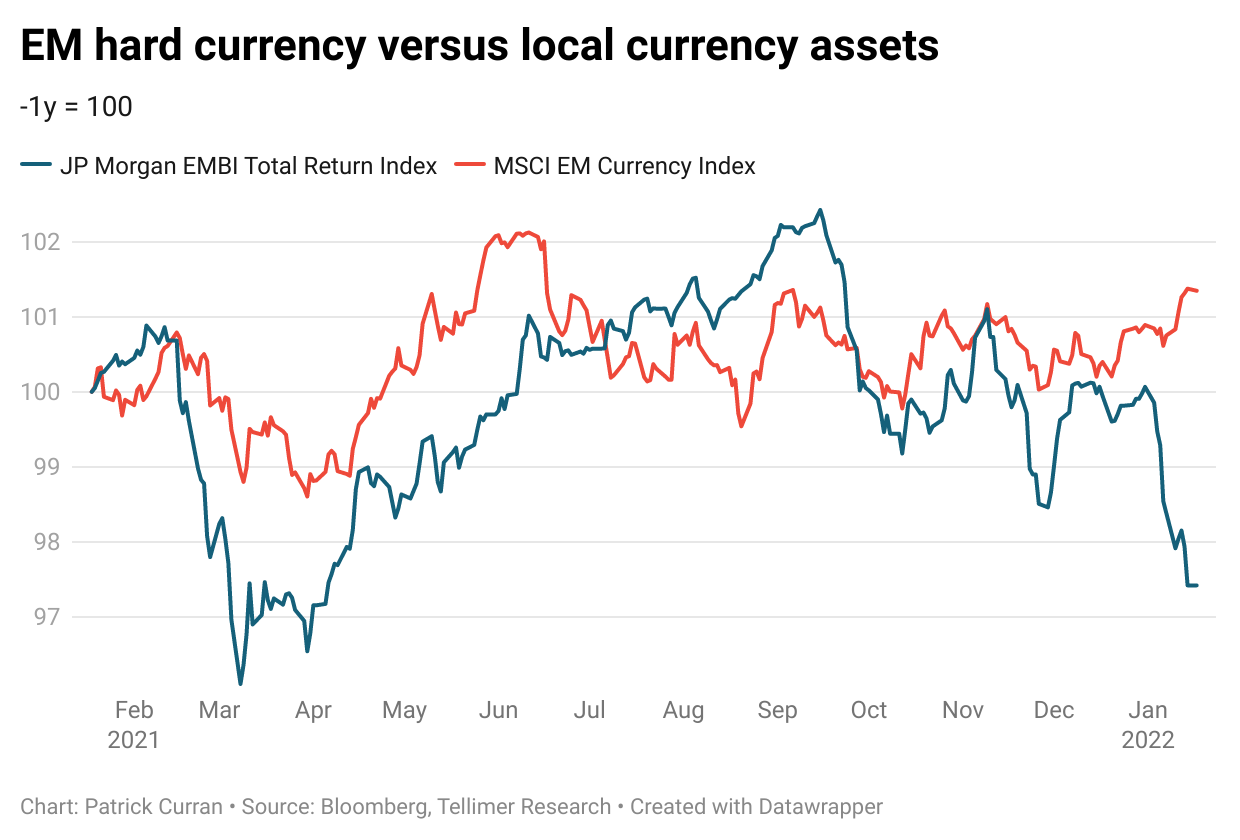 Further, EM central banks have continued to hike rates in the months since we wrote our last report, taking the unweighted average of rate hikes across our sample of 66 emerging and frontier markets to 90bps in 2021. In all, 28 central banks hiked rates last year versus five cuts and 33 on hold. However, policy hikes were more than offset by rising inflation, which increased to 7.1% at the end of the year across our sample from 3.8% at the end of 2020, pushing the real policy rate down to -2.6% from around zero at the end of 2020. 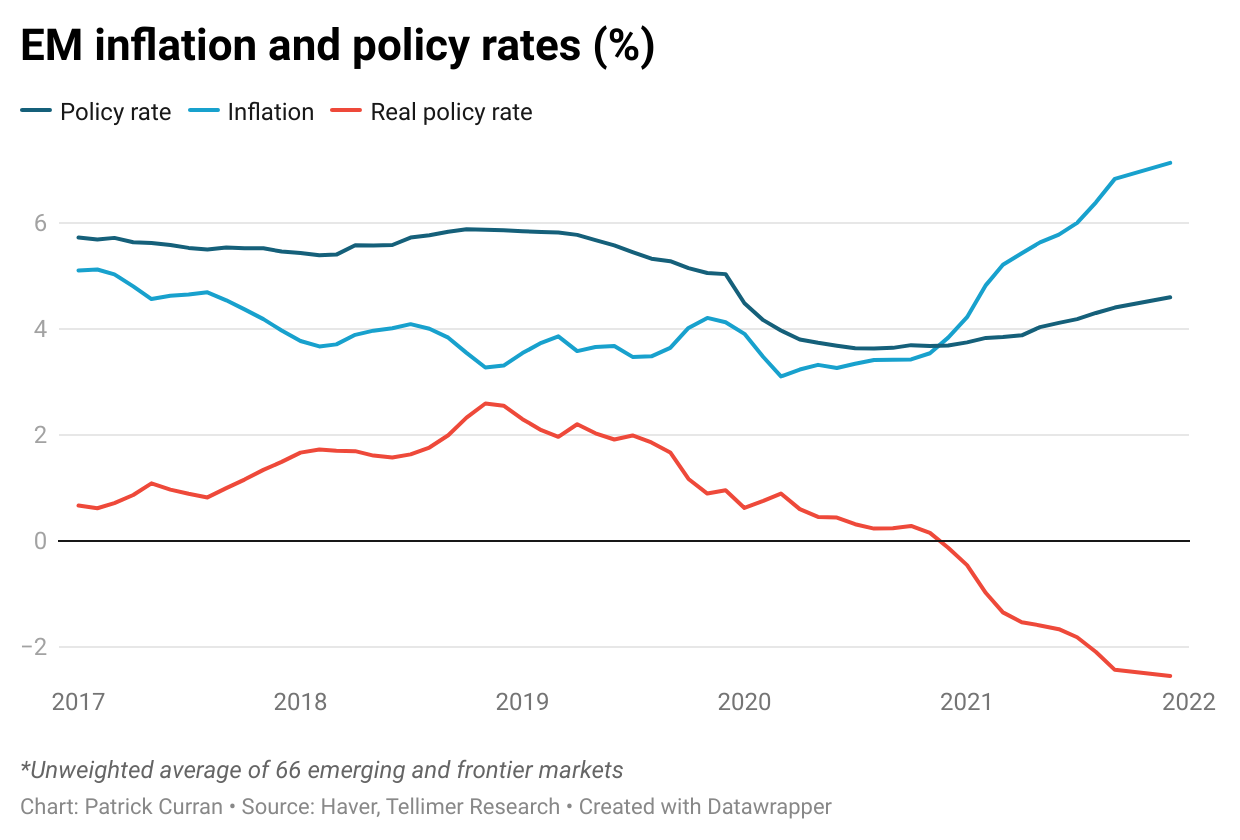 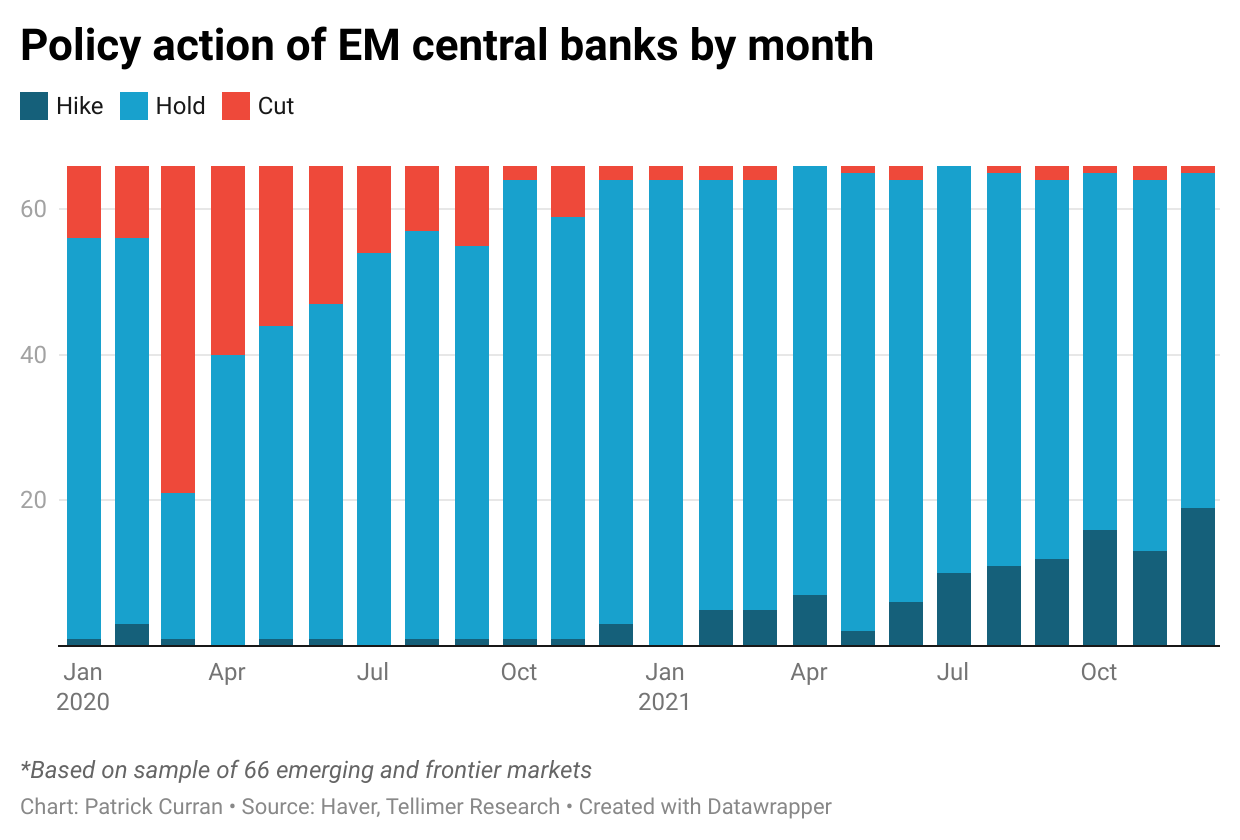 That said, policy rates in DM have been much more static and the rise in inflation even greater, with the unweighted average policy rate across our sample of five major DM central banks (the Fed, ECB and Banks of England, Japan and Canada) rising by just 3bps last year (with a lone 15bps hike by the Bank of England in December, plus out-of-sample hikes of 25bps by Norway and 50bps by New Zealand) versus a rise in inflation to 4.5% from just 0.2% at the end of 2020. This has pushed the differential between EM and DM real policy rates from a decade low of 0.4% at the end of last year to 1.8% in September, broadly in line with the average of c2% over the past decade. 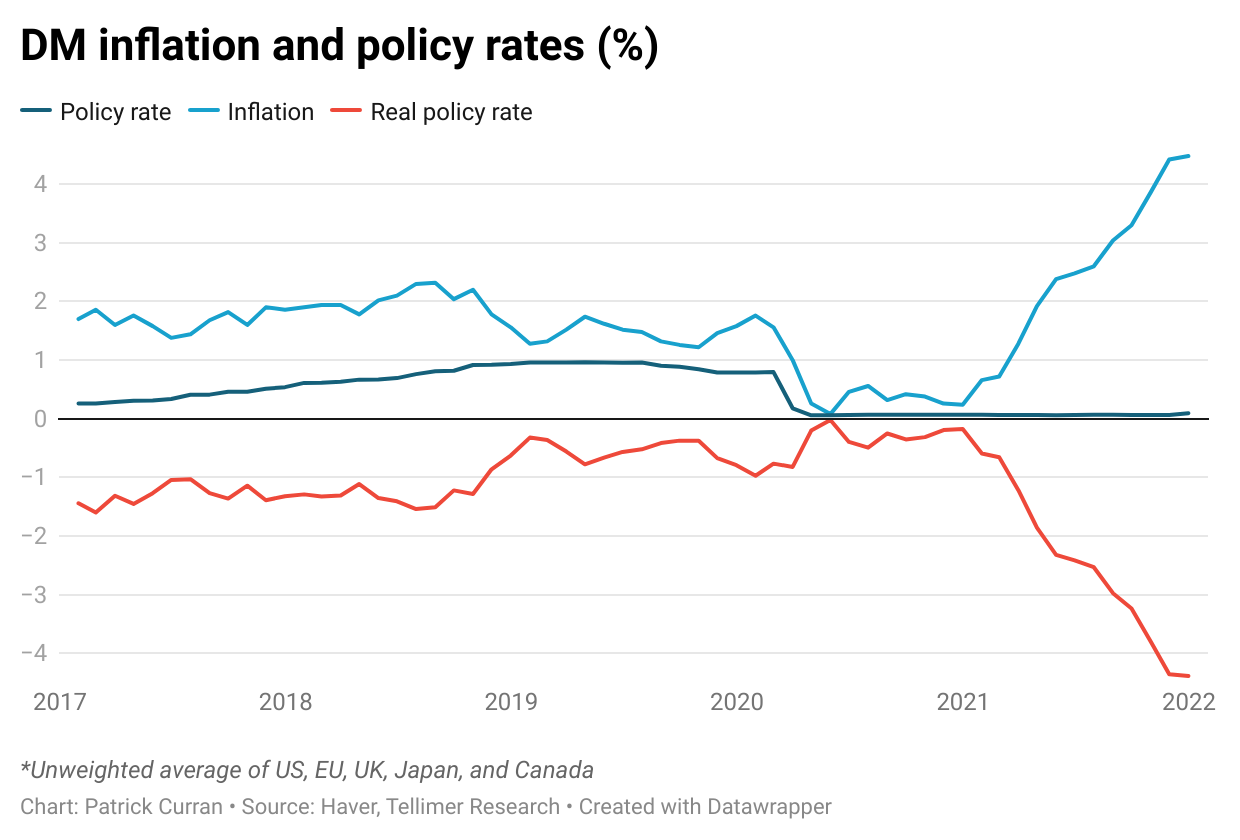 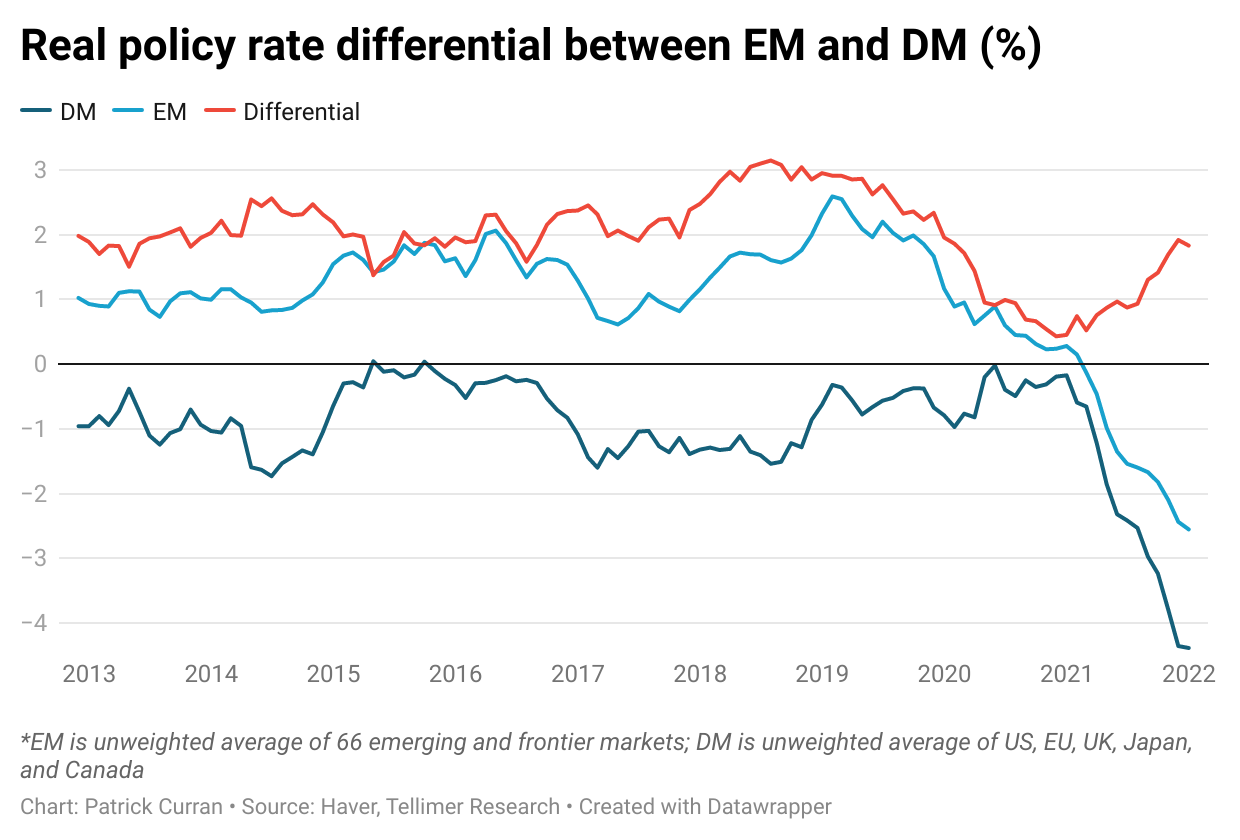 Looking ahead, though, EM central banks cannot afford to be complacent. The Bloomberg economic survey predicts inflation to keep rising in EM from 3.4% at the end of 2021 to a peak of 4.3% in Q1, before moderating only slowly to 4% by year-end. Meanwhile, inflation is forecast to have already peaked at 6.3% in DM at the end of 2021, with a projected decline to 4.9% in Q1 and 2.5% by the end of the year. In response, EM central banks are projected to hike rates on average by another 75bps by year-end versus 30bps of hikes for DM. 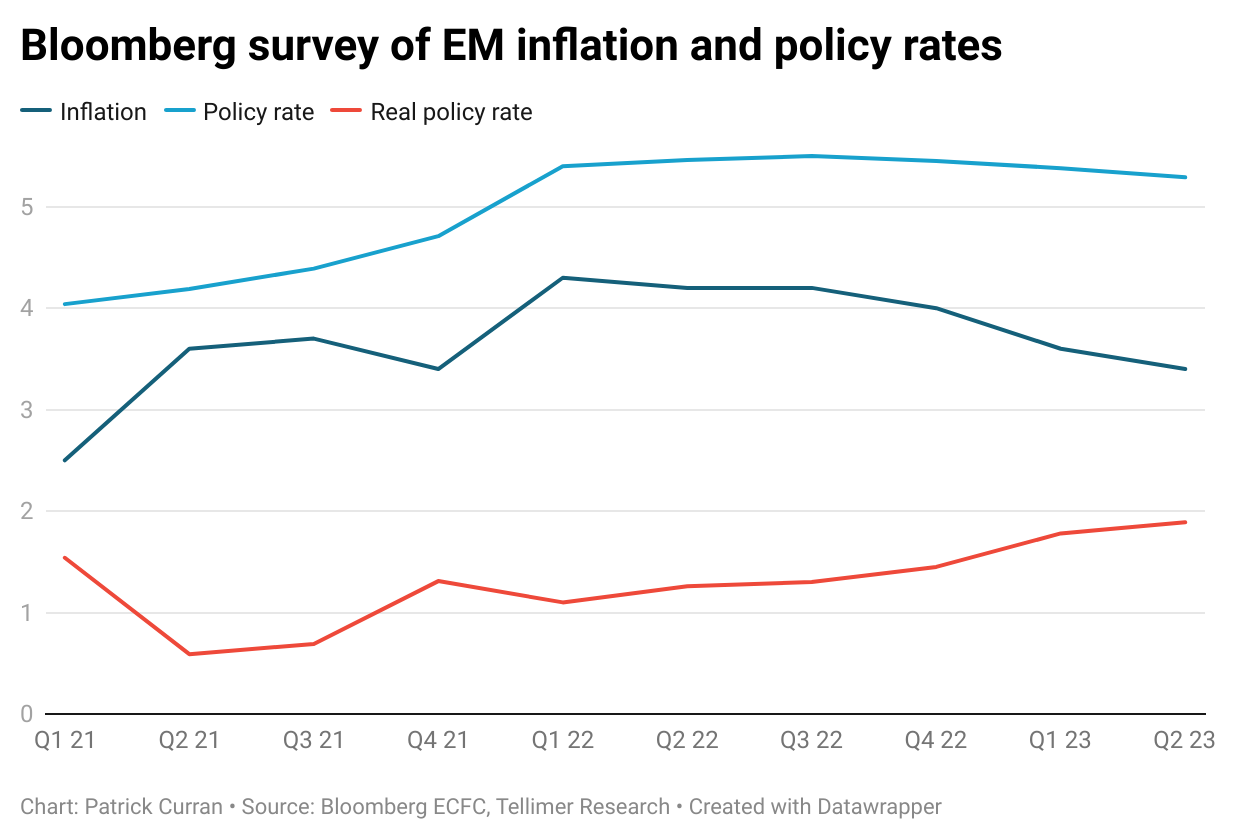 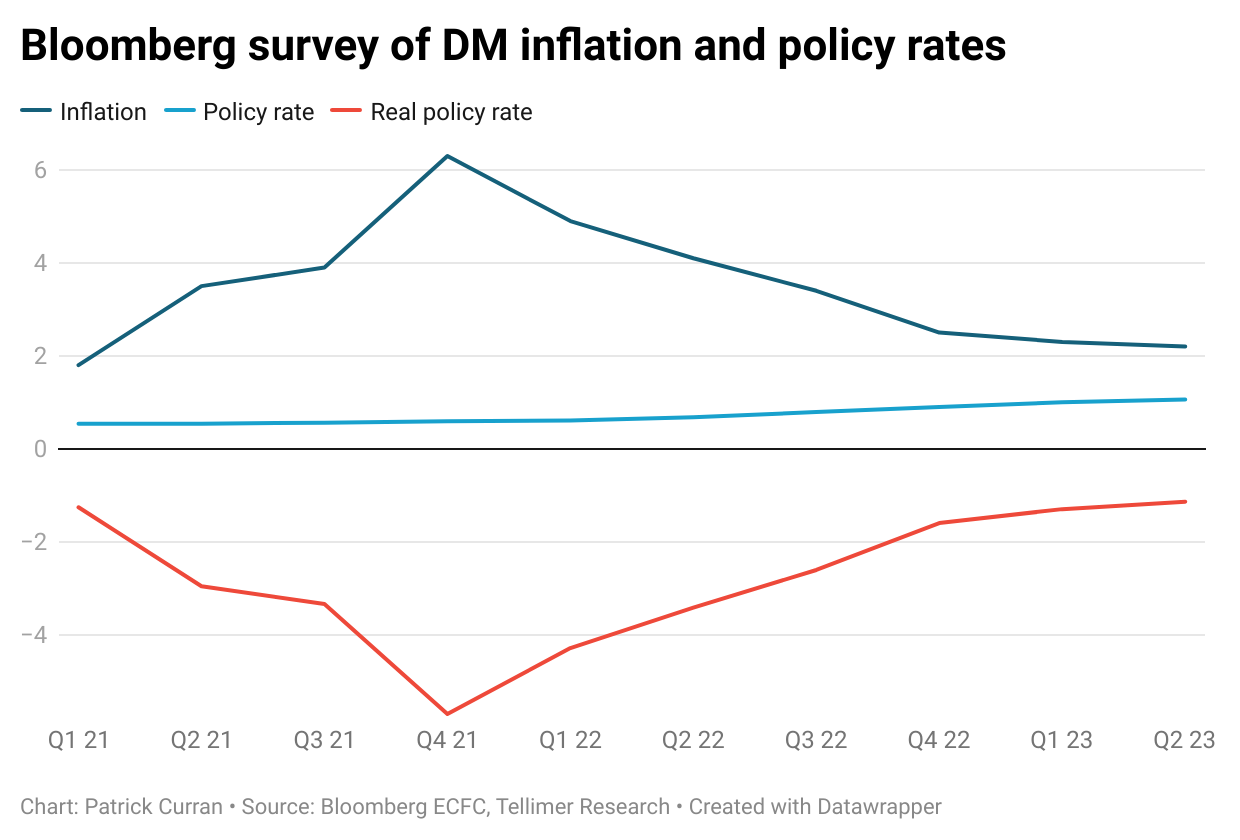 If these forecasts are accurate, it means that the positive real interest rate differential enjoyed by EM will be eroded over the course of the year, potentially leaving EM currencies vulnerable to DM policy tightening. And with ongoing supply and labour market constraints and rising commodity prices around the globe, it still isn’t clear when the inflation peak in either DM or EM will be reached and at what pace disinflation will take place. With relatively lower central bank credibility and less well-anchored inflation expectations in EM compared to DM, persistently high inflation could cause a self-perpetuating cycle that de-anchors expectations and necessitates a more painful policy response to rein it in. 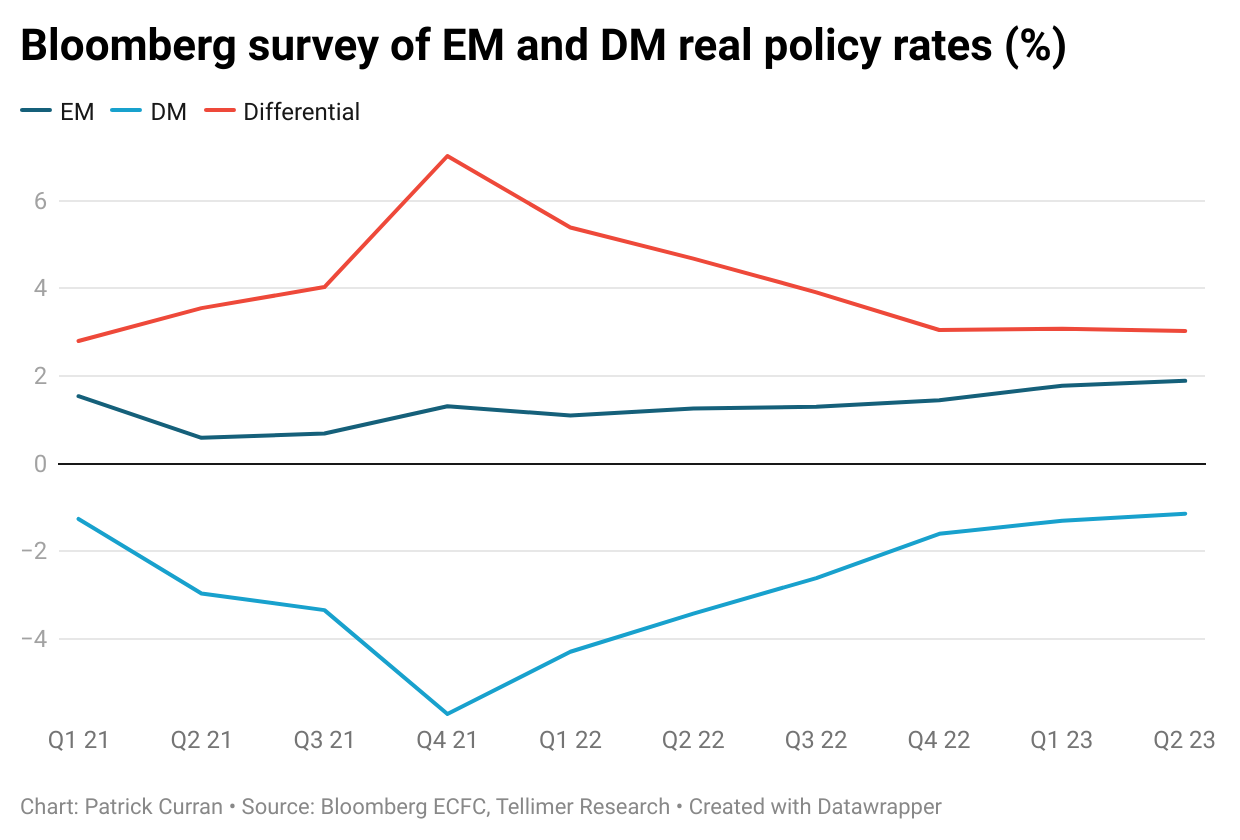 Against this backdrop, EM central banks must remain vigilant. Proactive policy hikes in 2021 helped insulate EM currencies from a more severe 'taper tantrum' as the Fed began to ease its asset purchases, but further hikes will likely be required in many EM to make sure currencies do not succumb to a 'tightening tantrum' as DM central banks hike rates and begin to talk about and possibly commence unwinding their inflated balance sheets in 2022.

US rates and EM currencies remain surprisingly resilient in the face of rising inflation and a hawkish Fed policy shift but, if inflation does not peak in H1 22 as widely expected, then both could be in for a bumpy ride in 2022.

Taper tantrum avoided, but sticky inflation may cause tightening tantrum in 2022, November 2021

How emerging market central banks are staying ahead of the inflation curve, November 2021