EM hard currency sovereign bond issuance eased to US$8.3bn last month, down 20% from a revised US$10.5bn in October and a decline of 33% from the same month last year, based on our calculations using data from Bond Radar (we noted last time that October was the second best month this year, but it is now the third after the revision – Uruguay's issue has been marked down about US$500mn lower). But despite this, October/November were still the best two-consecutive months this year since March.

It brings total issuance to US$86.4bn year-to-date, which despite the recent surge, is still only half the amount seen in the same period last year. It means issuance will reach some US$94bn this year if it continues at this rate in December, which we think would be the lowest since 2015. 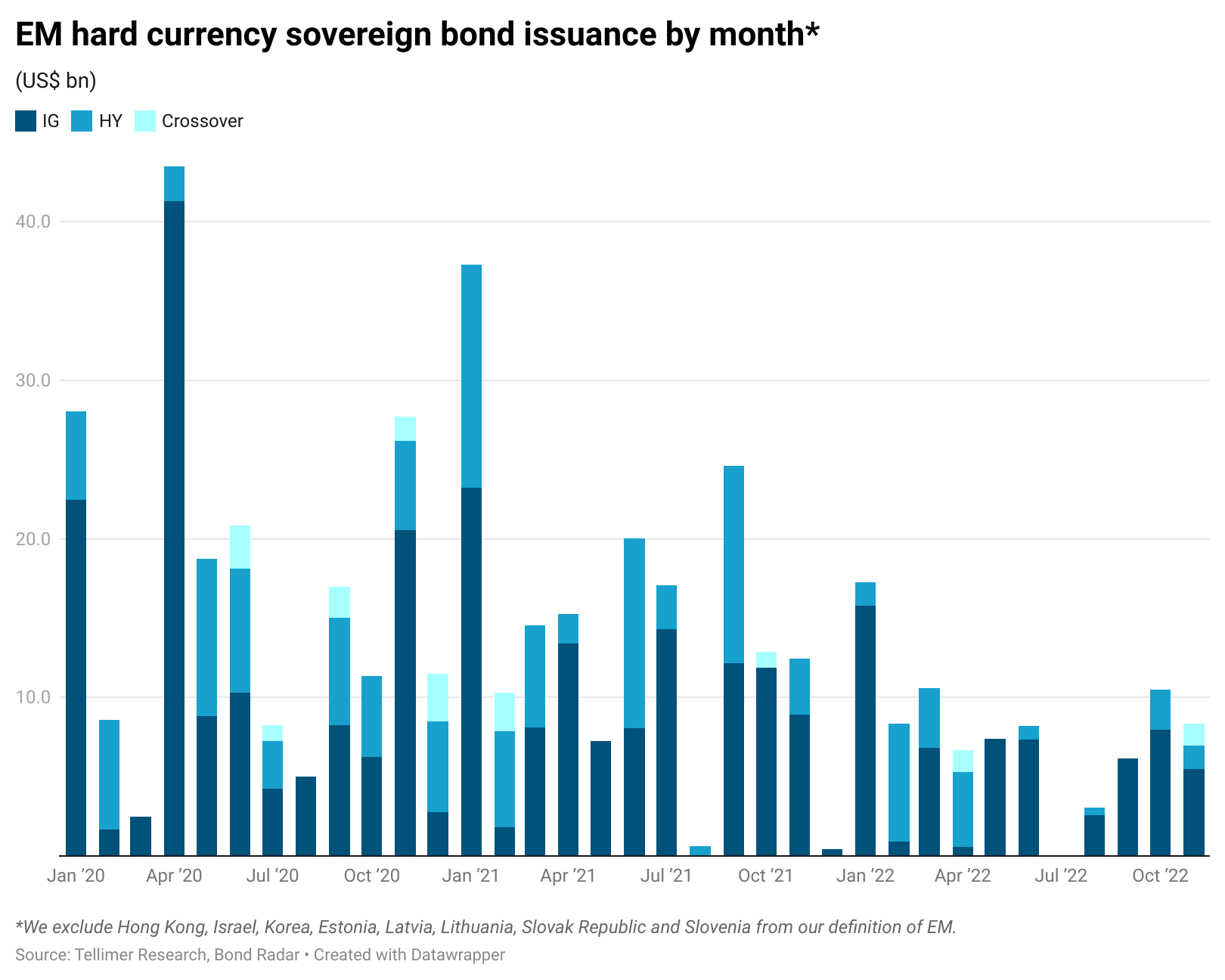 Last month's issuance came from just five issuers – three investment grade (Poland, Hungary and Panama), one high yield (Turkey) and one crossover (Colombia). IG accounted for the majority of issuance by volume (66% of the total), followed by HY (18%) and crossover (16%).

In fact, the figures were slightly flattered by Colombia's last minute issuance on 28 November. Without it, overall issuance for the month would have been US$7bn. Colombia's US$1.4bn issuance was part of a liability management operation to buy back debt maturing in 2023-2024.

Meanwhile, in HY, Turkey – the only HY issuer since Guatemala in early August – issued for the second month running (US$1.5bn in November after US$2.5bn in October), and the fourth time this year (despite its own macro issues). Turkey has issued a total of US$9bn this year. But besides Turkey, there has been no meaningful HY issuance, or single-B issuance, since Angola in April.

As a result, IG continues to account for most issuance ytd, at 71% of the total, with HY 26% and crossover 3%.

In other news, El Salvador also announced a cash tender offer for its 2023 and 2025 global bonds, its second after the one in September, as it seeks to avoid default on the January maturity. The offer will expire on 6 December. But perhaps the biggest news in the EM debt markets was Ghana's announcement that it will seek to restructure both its domestic debt and foreign bonds, although details are still vague.

However, despite the slow primary market activity, November saw the best monthly performance this year by far – and perhaps the best since December 2008 – with a total return of 7.9% on the Bloomberg EM Sovereign USD index, with HY (+9.2%) outperforming IG (+6.7%) – and recall that HY outperformed in October too, with a 1.9% return; so that's +11% in two months. As a result, this has helped recoup some of the dire market performance this year, with a total return on the overall index of -17.6% ytd, with HY (-13.2%) outperforming IG (-20.7%).

This was spurred by a late-year rally on new optimism over the global inflation and rate outlook and, in particular, market expectations of a more dovish rate outlook from the Fed on the back of a lower than expected US inflation print for October. The ten-year US bond yield fell by 44bps on the month, to close November at 3.61% – its lowest since September. 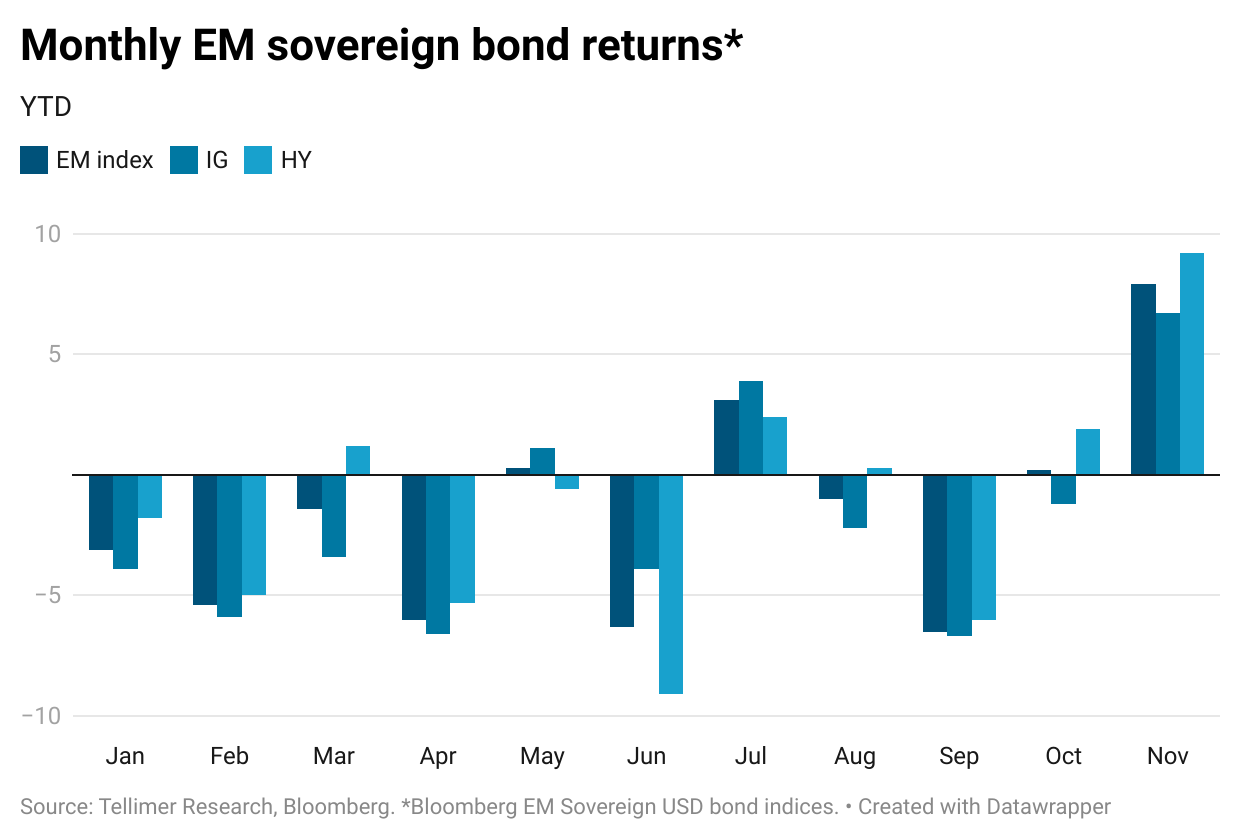 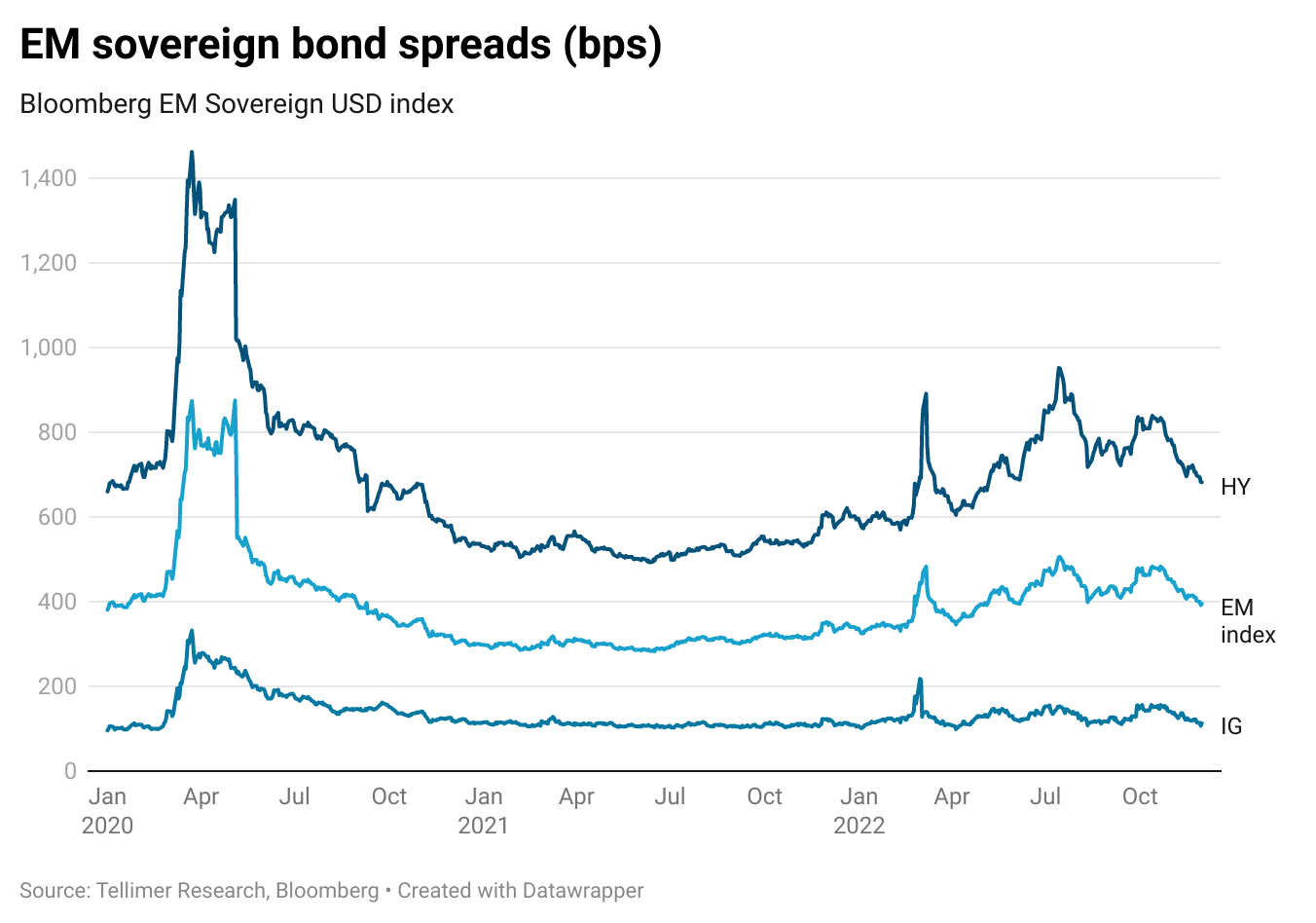 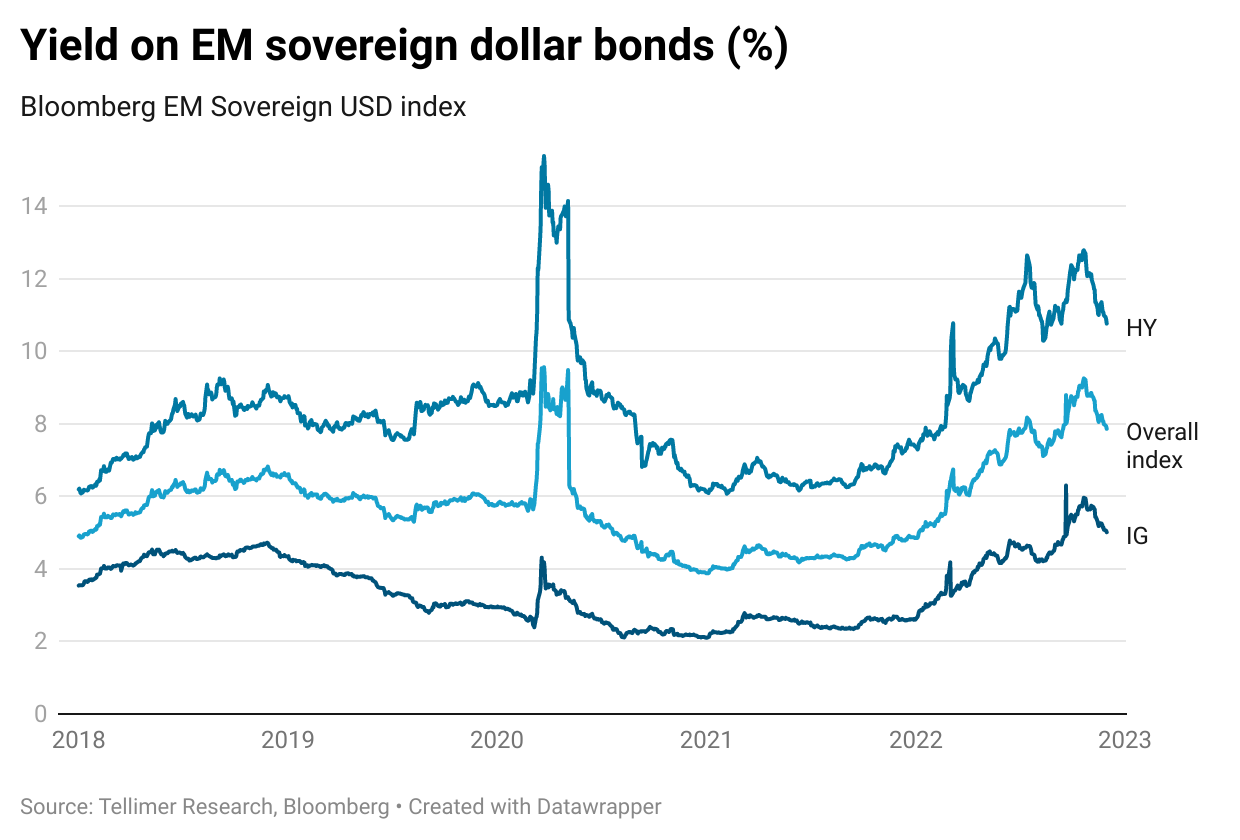 The strong late-year rally might spur the issuance outlook for the remainder of the year, although the window before the holidays – and drop-off in liquidity – is short. Moreover, despite lower yields, we still count 25 countries in the index as having yields of 10% or more, or being in default (excluding Russia and Venezuela); that's 34% of the index. While this is down on the 30 countries (over 40% of the index) last month, that's still a third of the index that remains locked out of the market.