As most EM sovereign debt trading takes a day off to recover from the recent sell-off, with the US Columbus Day holiday, we take a look at the performance of sovereign currency bonds during this period and identify the winners and losers (mainly losers).

EM bonds have suffered during this latest bout of risk-off on the back of renewed concerns over the outlook for US monetary policy (after the Fed's FOMC signalled a greater chance that interest rates may rise in H2 2022, earlier than expected, at its 22 September meeting, while its asset purchase programme is expected to begin winding down next month) and China (slowing economy and repercussions from the Evergrande debt crisis and its other property developers). US 10-year yields have risen to 1.61% (as of cob 8 October), an increase of 30bps since the end of August. Meanwhile, oil prices breached US$80 per barrel (Brent). 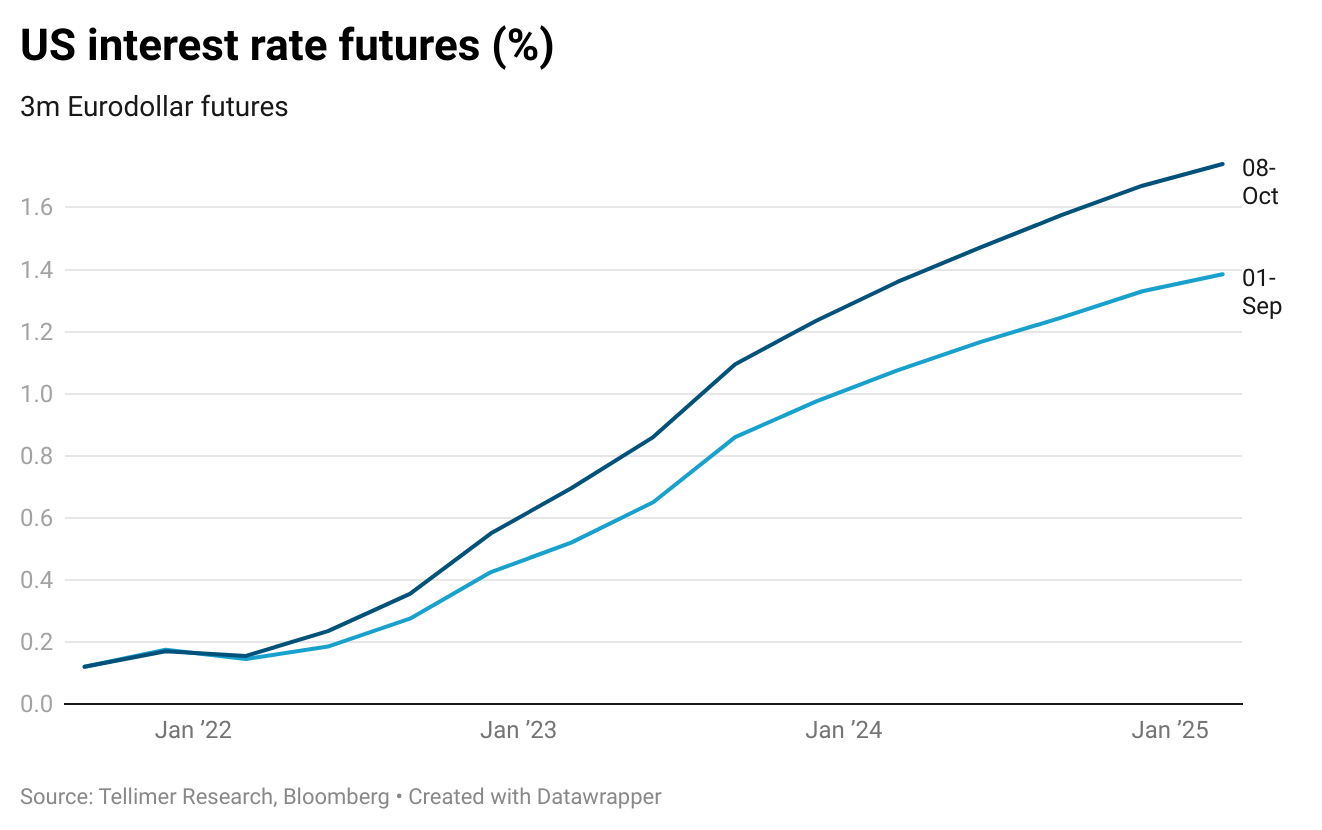 We look at the performance of EM hard currency sovereign bonds during this period of market volatility. We take a wide sweep of bonds including EMBIG constituent countries and off-index bonds, excluding bonds below US$300mn. We assess performance measured by total return from 15 September (which we take as date of the recent peak in the market, as proxied by the level of the EMBIGD TRI) to 8 October. 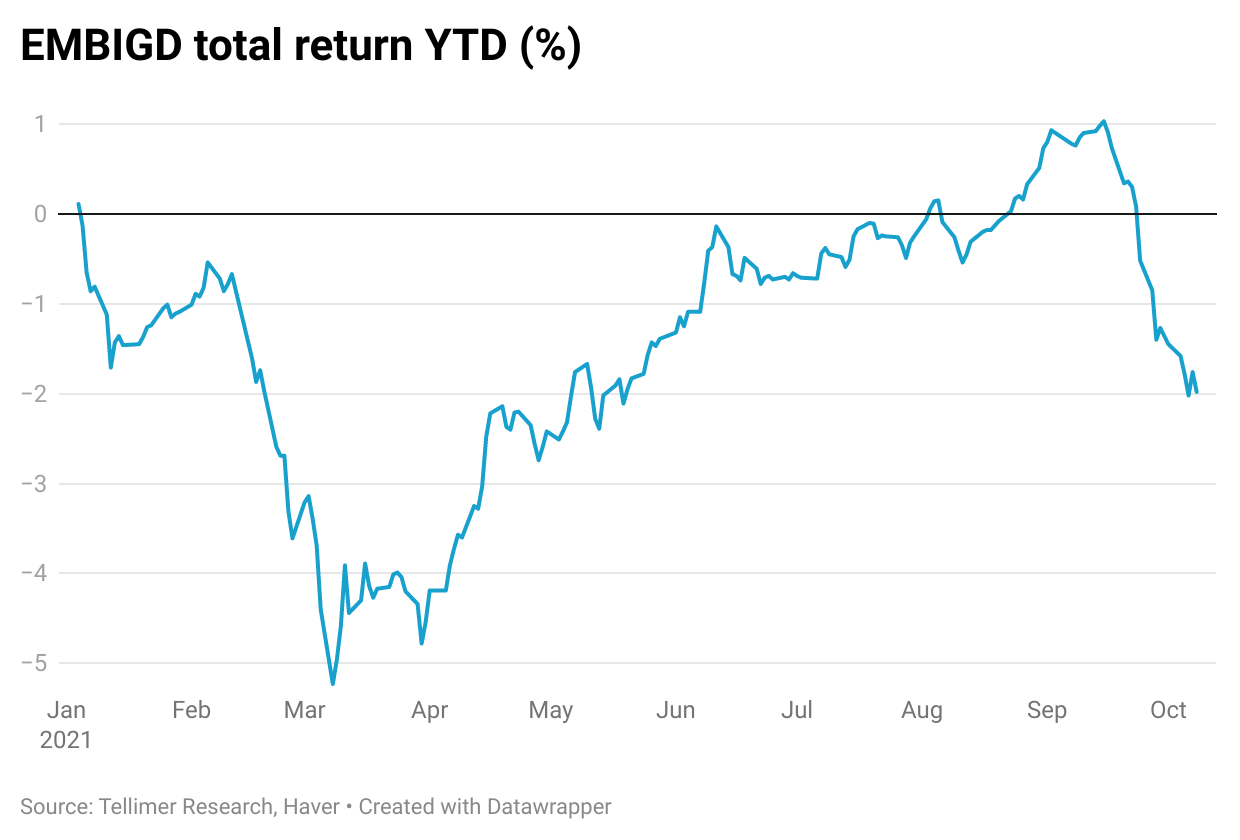 The top performing EM sovereign bonds consist of special situations (defaults), with Lebanon leading the pack (bouncing on the formation of a new government), followed by Venezuela and Belize (after exchange terms were announced). These markets were there only ones with significantly positive returns over this period (3-6%), compared to the total return on the EMBIGD of -3% (YTD -2%), although that partly reflects already depressed pricing, while PNG, Barbados, Iraq and Suriname also outperformed being largely flat.

At the bottom of the table, the worst performers have been Bahamas ('32s -9.5%), followed by Argentina (-7.5%), Ghana (-6.4%), Egypt (-6.3%), and Sri Lanka (-5.2%). Of these, Argentina and Ghana reflect a more genuine high Beta move, although both have their own country specific factors (see here on Ghana). Bahamas may reflect catch up in pricing given its relative stickiness in recent months and its illiquidity, with indicative prices falling by 14pts in a few days at the end of September, although it is not clear how much trading volume there has been. Egypt's underperformance is unfortunate, coming at the same time as the country returned to the market with a triple tranche offer. Sri Lanka reflects worsening external imbalances as reserves continue to plummet. 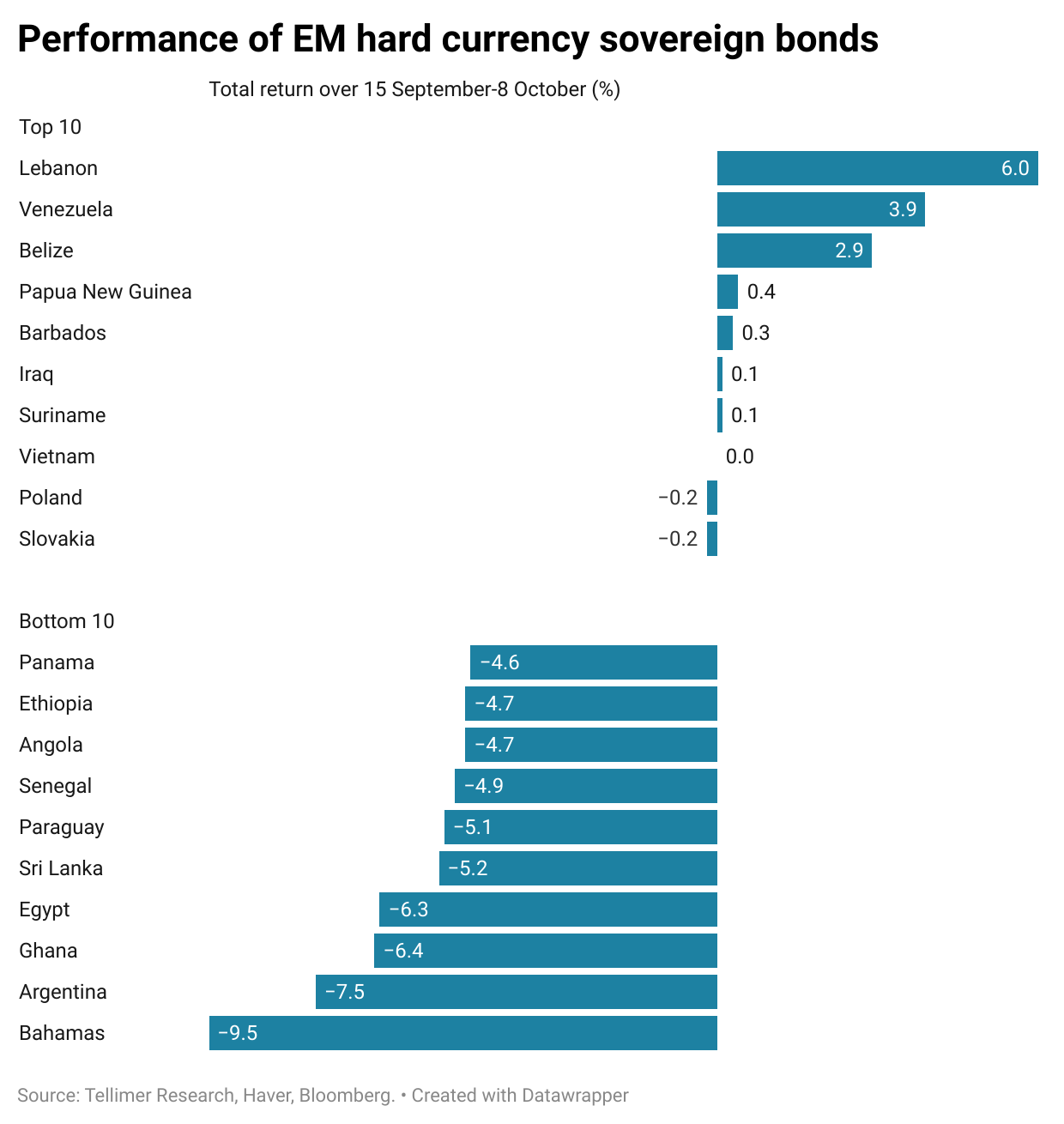 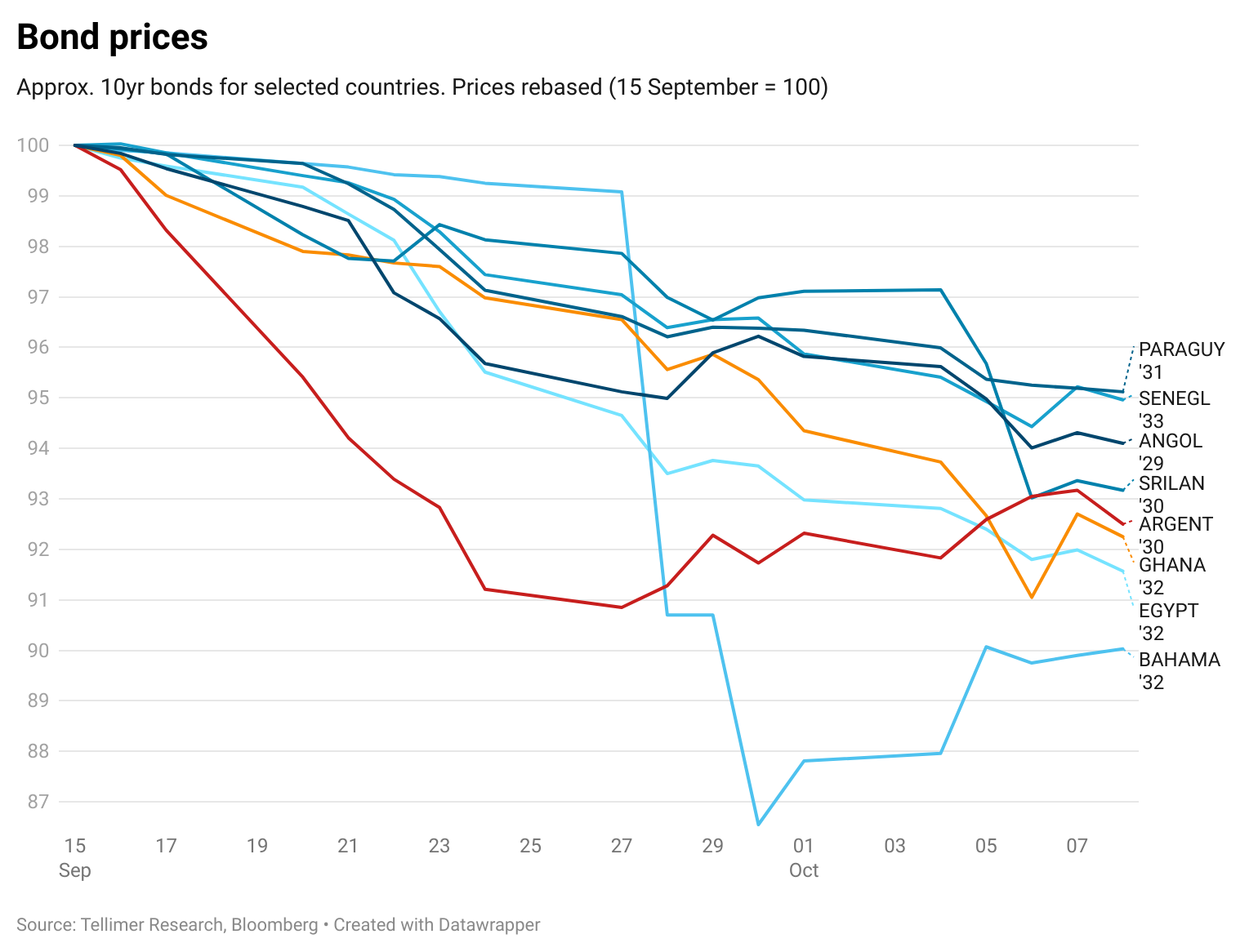 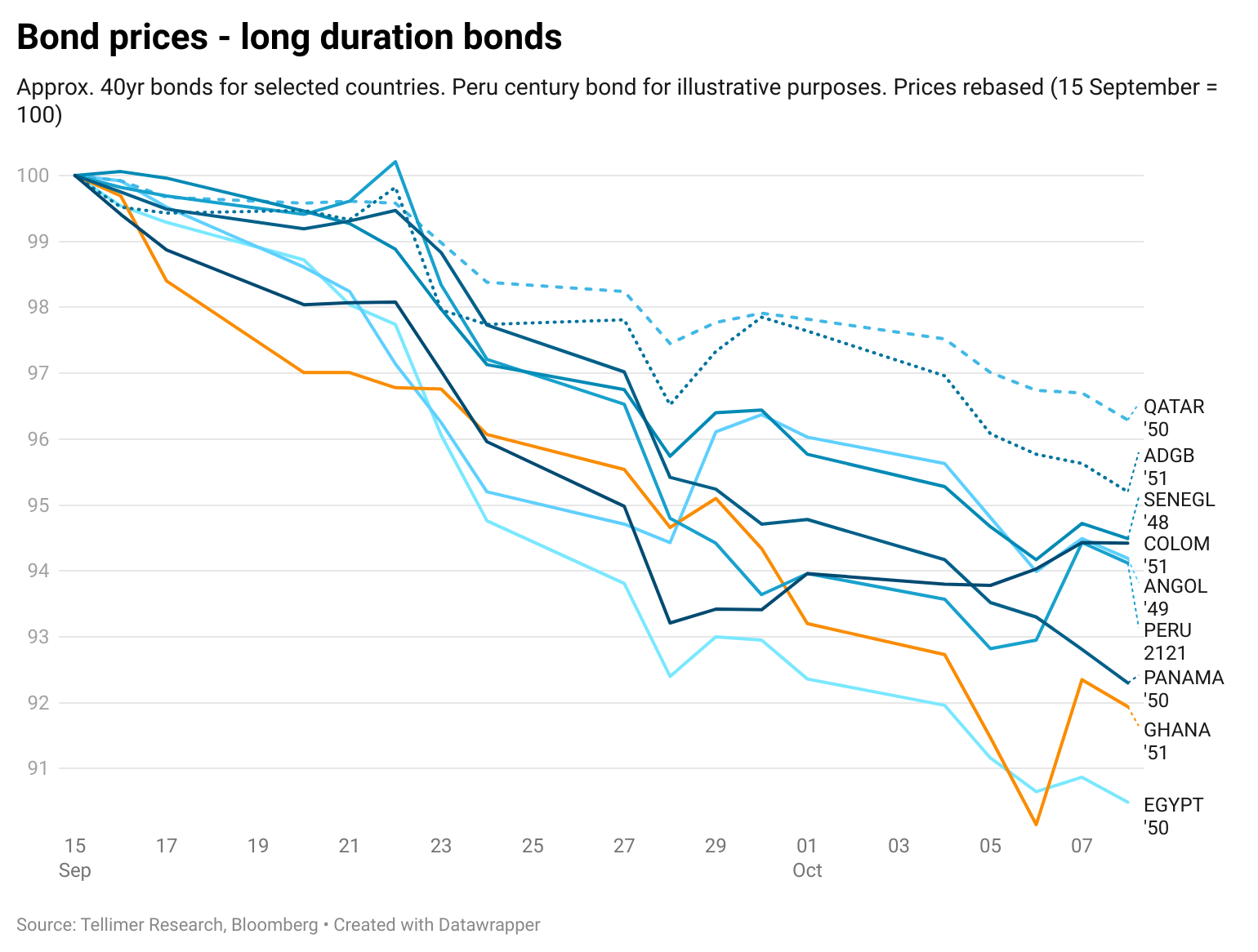 Yet, despite the market weakness, which could have opened up pockets of value on a selective basis, we think it is too early to call a bottom, not least because we think the crisis afflicting China's property developers shows no sign of easing. But at least this is a far cry from the dire performance of some of China's offshore property developers' bonds or, for that matter, Austria's century bond (RAGB 0.85% 2120), which is down c25pts since end-July.