US bonds remained bid yesterday, keeping the rally going as slowing producer price inflation and rising global geopolitical tensions propped up demand for USTs. USTs ended yesterday’s session richer along the curve by between 2bp and 7bp, with the belly leading the move. Volumes also picked up and were higher than the recent average, signalling that the move could still gain some momentum should the war in Ukraine escalate further and data continue to point to deteriorating economic conditions in the US.

On a closing basis, yields on the 2yr UST are now higher than those for the 10yr by the most in 40 years, pointing to recessionary conditions in the US. This inversion could potentially deepen still with some key data out of the States today that hold downside risks. Meanwhile, bunds and gilts also gained yesterday on heightened global tensions, flattening their curves further. Focus for gilts today will be on the local CPI figures, which could drive the front end higher if we see a topside surprise.

Rwanda: The National Bank of Rwanda raised its main policy rate for the third time this year after surging inflation led it to revise its inflation forecasts. The central bank raised the key rate by 50bp to 6.5%, the highest level since 2016, which takes the cumulative increases for this year to 200bp. The bank also reinstated the reserve ratio for commercial banks at 5%. Inflation in Rwanda is forecast to average 13.2% this year, compared with the 12.1% forecast in August. According to Governor John Rwangombwa, the rate hike aims to bring the rate of price growth back toward the central bank’s 2%-8% target by the second half of 2023.

Ethiopia: Prime Minister Abiy Ahmed has forecast Ethiopia’s economy to grow by at least 7.5% in the year to July 2023, lower than the 9.2% projection officials had previously estimated. According to Ahmed, the forecast is dependent on whether or not peace is maintained in Ethiopia. Ethiopia has been one of the fastest-growing economies on the continent, supported by heavy infrastructure investment, but the coronavirus pandemic and a conflict in the northern Tigray region has slowed expansion in the past two years.

Kenya: In further positive fiscal developments this week, the parliament’s budget office has indicated that the State’s shareholding in Kenya Power & Lighting Ltd. will be reduced to 15% from 51%. According to the budget office, the privatization of the country’s sole electricity retailer will likely lead to additional revenue and improve corporate governance.

Kenya: The Energy and Petroleum Regulatory Authority announced a reduction in the fuel price for the second month in a row on the back of lower oil costs. Specifically, Kenya cut gasoline prices by a shilling to KES 177.30 per litre in Nairobi. Diesel and kerosene prices were lowered by a similar margin to KES 162 and 145.94 per litre, respectively, starting November 15. The authority added that the “price of diesel was cross-subsidized with that of gasoline while a subsidy of KES 17.68 for every litre has been maintained for kerosene in order to cushion customers from the otherwise high prices.” The reduction by the regulatory authority is likely to help ease inflation pressures in Kenya.

Morocco: Morocco has cut farm water allocation due to drought. According to reports citing the Agricultural and Rural Development Minister, the area of irrigated farmland that relies on the Kingdom’s dams will decline to 417,000 hectares in the 2022-23 farming season due to the current drought, nearly 75% less than the area available during rain years. The reduction in water allocated to those areas is aimed at preserving drinking water supplies. Note that the Kingdom’s 100-plus dams are 24% full, one of the lowest rates in several years.

Egypt: Egypt’s trade deficit widened by 0.6% y/y to $4.18bn in August. The widening of the deficit resulted from a more pronounced drop in outbound shipments than imports. Specifically, exports fell by 7.6% y/y to $3.3bn in August 2022 from $3.61bn in the same month a year earlier. The decline in exports was attributed to drops in exports of certain commodities, including oil products and crude oil, whose exports plummeted by 19.8% y/y and 49.7% y/y, respectively. Meanwhile, imports decreased by 3.2% y/y in August to $7.51bn. While the deficit widened, going forward, the recent currency devaluation and a move to a flexible exchange rate could provide some support.

South Africa: There just seems to be no relief from Eskom’s load shedding, with the SOE warning that load shedding will be with us for another six to twelve months. It has been one calamity after the next, and far from fixing the problems at Eskom, they appear to be getting worse. Another head of generation has resigned, and seven months into this financial year, Eskom has already exceeded its budget of R11bn for diesel expenditure, implying that it will now become less affordable to run its diesel generators.

Oil: The bullish tone in the oil markets yesterday faded quickly as global investors reacted to rising geopolitical tensions following a reported missile attack on Poland. Brent quickly retreated from levels above $95 per barrel yesterday, with the benchmark front-month contract now edging lower and trading below $93.50. The escalation within Ukraine, meanwhile, saw the Druzhba pipeline, which takes Russian crude to eastern Europe, halted. This threatens to tighten the market even further and is the reason why the losses seen so far have not been more pronounced. According to the IEA, global stockpiles of crude have plunged to 18-year lows and with the European winter months approaching, we could see further strain placed on inventories.

Selling pressure on the Kenyan shilling showed no signs of easing yesterday, with the currency plunging to a record low just shy of 122 per dollar as dollar demand from the manufacturing sector weighed. While support from tea exporters and investors buying government bonds provided some inflows, it proved insufficient to overcome the tide of dollar demand. Losses on the session, therefore, added to the shilling's year-to-date losses of more than 7.0% against the USD. Increased dollar demand from importers, particularly in the oil and energy sectors, against the backdrop of the limited supply of hard currency and the ever-present current account deficits are contributing to shilling weakness this year. 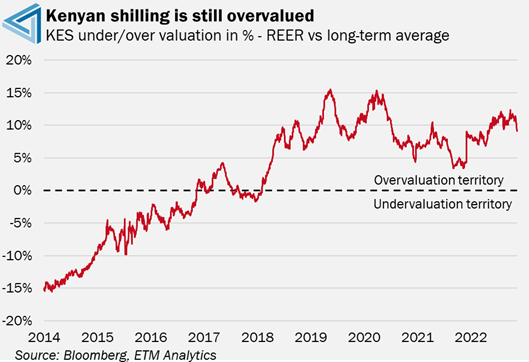 Despite the weakness displayed by the shilling, it remains overvalued by around 9.0% on a real effective exchange rate (REER) basis. However, the REER has started to trend downwards. This suggests that there is room for the shilling to weaken further. Pressure is set to remain entrenched on the shilling as Kenya's foreign exchange inflows remain subdued amid tighter global financial conditions, the negative impact of the war in Ukraine, and the persistent drought conditions that have weighed on agricultural exports.

The view of further shilling weakness is corroborated by the derivatives market, which shows that further significant depreciation is priced in already. For context, the 6-month non-deliverable forward tenor is trading around 7% higher than yesterday's spot price.

There has been a clear shift in global risk sentiment recently, with financial markets turning increasingly bullish on riskier emerging market assets. Emerging market bonds and stocks have rallied hard in recent days amid signs of a potential slowdown in the pace of rate hikes in the US, which would provide some much-needed breathing room for riskier assets. While it has been one of the worst years on record for EM bonds, the tide seems to be turning. 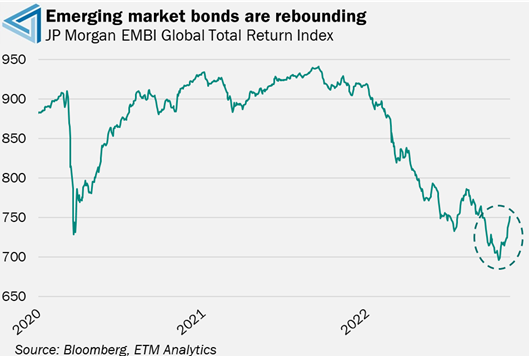 In addition to easing rate hike bets, emerging market bonds have also found support from easing fiscal concerns as more distressed developing economies receive financial support from international lenders, including the International Monetary Fund and the World Bank. Since its lows in October, the JP Morgan Emerging Market Bond Index has gained more than 7.0%. The rebound in emerging market bonds has been accompanied by a sharp rebound in emerging market equities, with the MSCI Emerging Market Index up 11.5% from its lows in October.

It is worth mentioning that Bloomberg’s fear-greed indicator, which compares buying strength against selling pressure, is the most bullish since 2011, when a deal to resolve the Eurozone’s debt crisis by boosting the shared bloc’s bailout fund triggered a more than 20% gain in stocks in less than 20 days. The bullish market positioning implies that the recovery in emerging market assets is likely to persist in the months ahead, particularly if we see concrete evidence that a pivot in global monetary policy is underway.

Macroeconomic: Inflation pressures in Africa remain robust but are expected to ease from March 2023 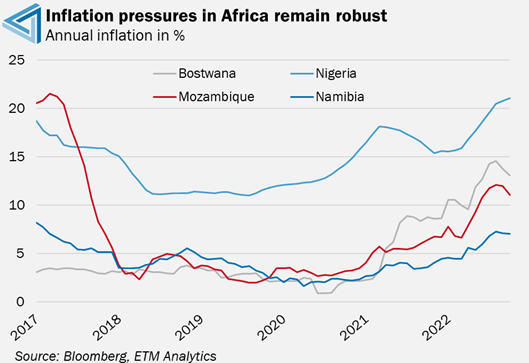 Currency weakness has also contributed significantly to the recent episode of inflation across Africa. With the exception of the Mozambican metical, which is relatively flat on the year, the Namibian dollar (-9.89%), Botswanan pula (-9.05%) and Nigerian naira (-4.32%) are all trading deep in the red against the USD this year. The persistent currency weakness is compounding import price pressures, which are being passed onto consumers.