Hopes should not run too high that elections this year act as a catalyst for positive change in economic policy in these five emerging markets: Argentina, Nigeria, Pakistan, Turkey, and Zimbabwe.

Incumbents wedded to poor policies are either too strong and likely to win re-election – Turkey and Zimbabwe – or the vested interests which block reform are too entrenched regardless of the election winner – Argentina (pro-welfare electorate), Nigeria (tribal elders, military), and Pakistan (military-intelligence deep state).

Other elections in EM this year include Thailand, where the transition away from military-dominated rule is a bigger issue than economic policy, and Poland, where the PIS-led government is more likely to compromise on EU governance standards, and thereby release EU funds, should it retain its parliamentary majority rather than in advance of the election. 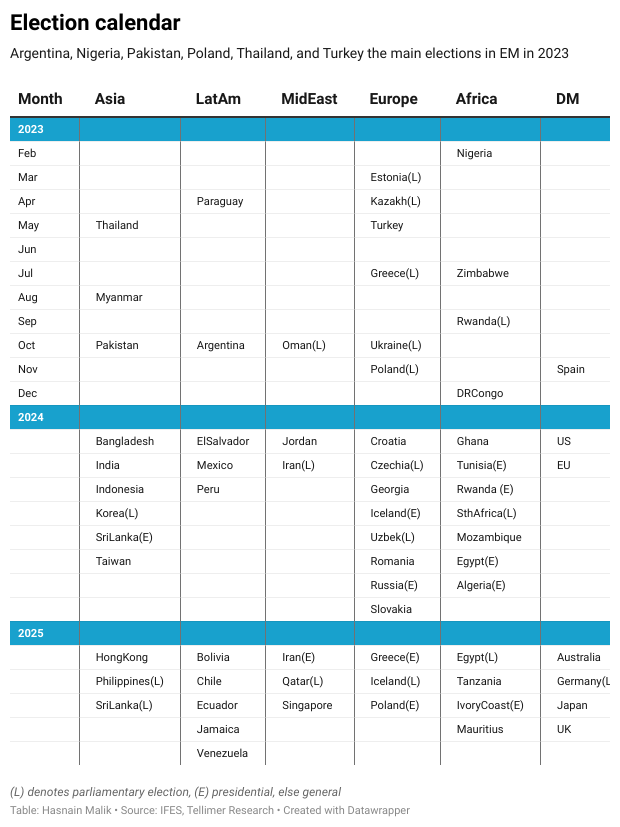 Argentina re-tracked its IMF loan in April 2022 but capital controls remain in place. The political will to persist with fiscal course correction is at risk of disintegrating as the October 2023 election approaches (the incumbent, leftist, Peronist, Frente de Todos bloc is already split).

The precedent from the victory of Macri and his centre-rightist Cambiemos coalition in 2015 is that, while policy can be redesigned quickly and foreign investors can almost as quickly jump back on board (in the next instance, putting the ninth sovereign default behind them), the four-year electoral cycle may simply be too short for the necessary fiscal reforms to take root.

The centre-rightist bloc, Juntos por el Cambio (which is composed of much of the same members as Cambiemos), has an opinion poll support, measured in October-November 2022, ranging from 30% to 35%, ahead of the Peronists with 24% to 33%. However, the far-rightist bloc, La Libertad Avanza, led by political outsider, Milei, is polling 16% to 23%; they may either eat into the voter base of JC or end up in an unstable coalition.

However, three factors should restrain enthusiasm for an investment-case renaissance in Nigeria:

The two other candidates, Bola Tinubu from incumbent APC (current President Buhari has reached his term limit), who polled 13% in the same survey, and Atiku Abubakar from the opposition PDP, who polled 10%, also promise some form of fuel subsidy removal and exchange rate liberalisation.

However, the credibility of their promises is arguably undermined by both of their senior-level participation in previous federal governments which have failed to implement much in the way of structural reform.

Pakistan is in full-blown economic crisis, with high risk of default on external debt, at worst, and an adherence to a managed official exchange rate, which throttles growth by rationing hard currency and encourages the growth of the unofficial channel for remittances, at best.

There appears to be no sign that the ruling PDM coalition of PM Sharif will willingly change its approach to debt rollover and bilateral assistance over reform, and foreign exchange rationing to maintain a quasi-fixed official exchange rate.

The political catalyst of a change in government is possible, but even if an outright parliamentary majority for Imran Khan’s PTI emerges, it is unclear whether it will have the political will to take painful fiscal decisions needed to maintain IMF and multilateral support and enjoy the cooperation of the same military-intelligence deep state that played the major role in derailing its last stint in power in April 2022.

For more, see Pakistan: Imran Khan shot, not fatally, as the revolt continues(November 2022)

The rightist PIS-led government's ability to test the limits of EU tolerance for deficiencies in independence of the judiciary, media freedom and human rights is weakened by the tougher external environment related to the Russia-Ukraine War, lower global growth and higher global cost of funding. However, Poland may not settle on any compromise with the EU in advance of its November 2023 election.

Although, the parliamentary opposition (Civic Coalition) is significantly more fragmented than the governing coalition, this low opinion poll performance for PIS is likely to prevent from risking any further loss of support by compromising with the EU before the election.

Paetongtarn 'Ung Ing' Shinawatra, a scion of the Shinawatra political dynasty, and the Pheu Thai political party they dominate, has taken a large opinion poll lead – about 20 percentage points over both military and liberal rivals, according to NIDA polls in December 2022.

This follows multiple attempts at no-confidence votes in parliament for the incumbent, military-backed Prime Minister Prayut Chan-o-cha, a comprehensive loss for the military-associated candidate in the Bangkok gubernatorial election in May 2022, and the mass youth protests of recent years.

The Shinawatras are hailed for their business-friendly policies by their supporters and reviled for their alleged corruption by opponents. To the degree that they are likely more successful in driving domestic and foreign investment, a transition of power to the Shinawatras will be welcomed by the market.

But the same cannot be said of the youthful, mass protestors who have targeted the military, the elected government that took over from the military junta, and, occasionally, the monarchy, in recent years.

The recovery in tourism in Thailand is in full swing but the country faces a fractious election.

Turkey is still driven mainly by esoteric risks related to the unorthodox interest rate policy and re-election bid of President Erdogan. For local investors, the equity market remains an inflation hedge but, for foreign investors, continued friction in currency conversion and inevitable further currency depreciation should keep Turkey off the radar.

The general election in May is likely to act as a catalyst for a reversion to orthodox economic policy in the event that an opposition candidate wins. However, while Erdogan’s own popularity among swing voters has declined, his political base outside Istanbul remains loyal and his use of authoritarian tools to undermine the opposition, as well as persistent divisions within the opposition, suggests the chances of an opposition win are slim.

Orderly power transition an achievement in itself

More broadly, given the deterioration in the standard of democracy globally over the last decade, perhaps an orderly transition of power should be considered an achievement in itself in any of this year's elections. 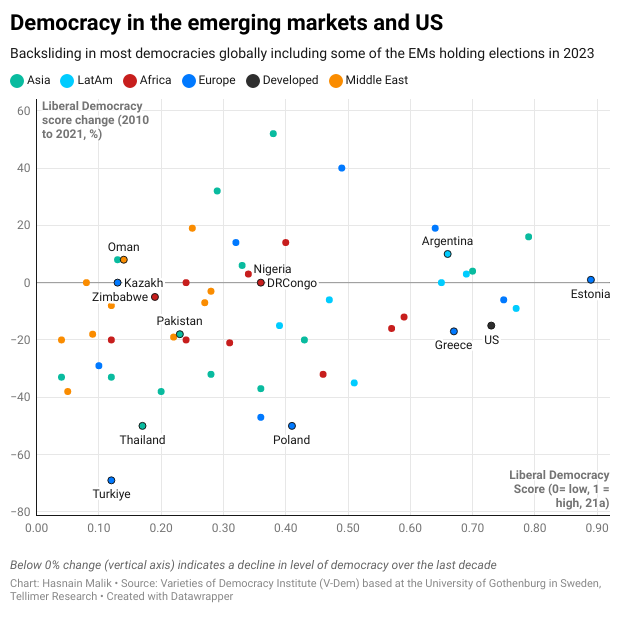