El Salvador launched a second cash tender offer for its 2023 and 2025 global bonds yesterday, as promised two months ago. It follows its previous offer in September, after which the authorities announced another offer would be launched in eight weeks' time. Priority is now given to the '23s. The offer comes weeks before the maturity of the '23s in January.

The deadline for the latest tender offer is 6 December.

Details of the new offer

However, the size of the tender is quite small, which makes us question whether it is worthwhile. The aggregate amount allocated to the purchase is not to exceed US$74mn – much smaller than the cUS$355mn used in the previous operation (which retired US$566mn in bonds across the two issues), and tiny in comparison to the US$1.034bn (notional) outstanding that remains in the two bonds combined after the earlier buyback. While it could buy a reasonable amount of the '25s (given its more distressed – ie lower price), it doesn’t really move the dial for the '23s (US$667mn outstanding).

Even if it all went towards the '23s, which have priority, we think it would only retire less than US$80mn (barely 12% of the issue). That would still leave a hefty cUS$590mn (notional) remaining of this bond; that is, the tender doesn’t really make a dent in reducing the size of the '23s.

Moreover, as the authorities claim to have the funds to repay the 2023 bonds at maturity (due 24 January), according to media reports, why as a bondholder not wait and get paid five more points in just eight weeks’ time?

And recall, in the previous operation (at a tender price of US$91 for the '23s), the amount accepted of the '23s was just 24% of the total accepted amount. This suggested little interest from those holders then. And, with the higher price offered now, there has been benefit in waiting. They may hope this will continue.

Acceptance of the tender may be pro-rated if the amount to purchase exceeds the allocated amount. El Salvador reserves the right to accept only a portion of notes tendered, or none at all, and to extend or terminate the offer at its discretion.

The extent of bondholder participation is not clear at this stage but, as before, we think default concerns will persist (regardless of what happens to the '23s). While the buyback plan has helped to support front-end prices, easing imminent default concerns, it has done little to lift prices over the rest of the curve. That will take a credible and coherent financing plan, in the context of a medium-term economic strategy, which is still sadly lacking, rather than the ad hoc scrambling around for money that we are seeing at the moment, although the signal of willingness to pay may provide some reassurance.

We maintain our Hold on El Salvador bonds, with the 2032s indicated at US$41.2 (yield 24.5%) as of cob 29 November on Bloomberg (mid-price basis). The '32s jumped about 5-6pts around the time of the first tender offer, although have since been relatively flat around current levels. They are, however, up 50% since their July lows; but down 34% ytd. We don't have specific recommendations on the '23s or '25s. 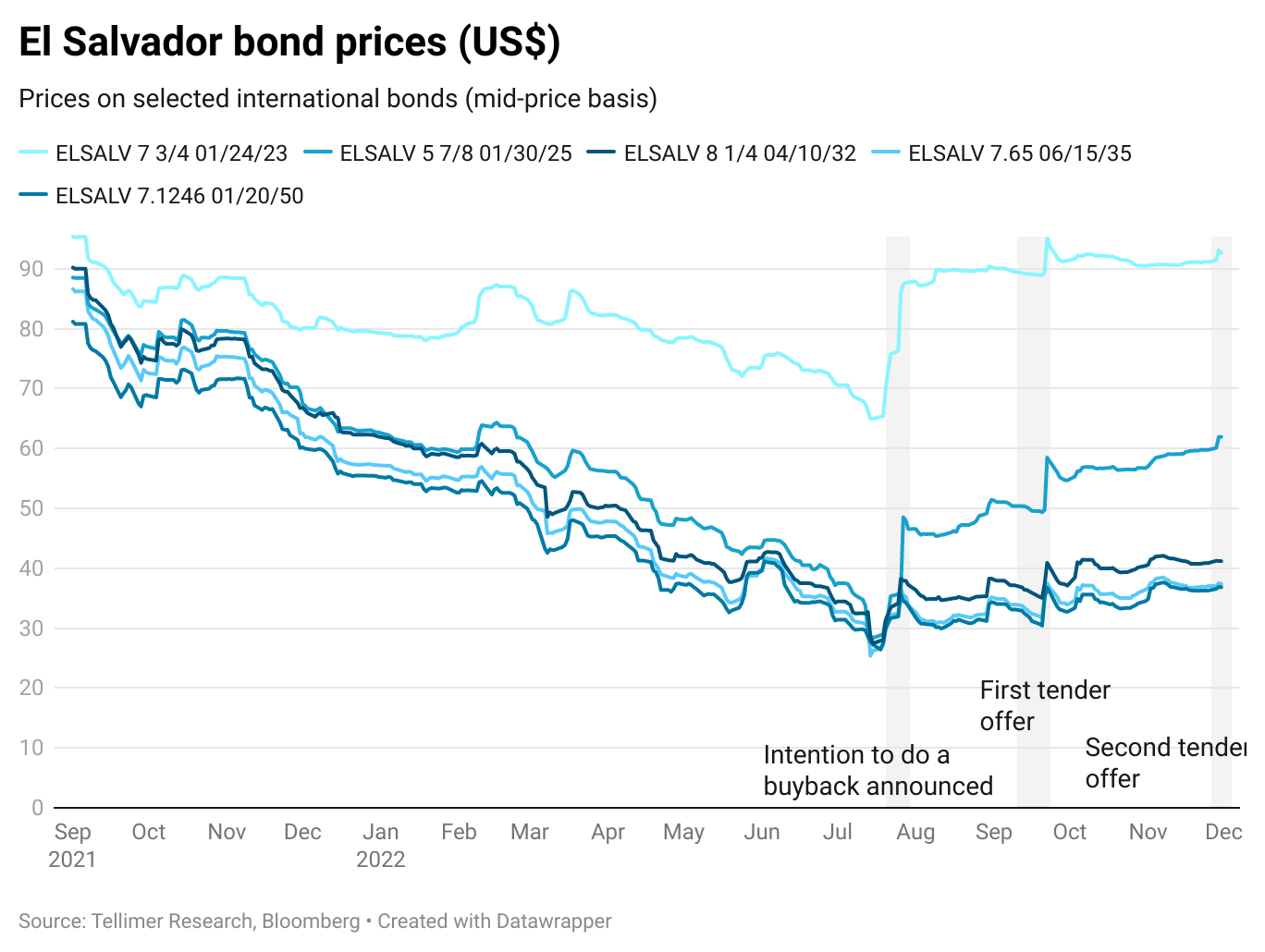