The IMF Board concluded the 2021 Article IV consultation with El Salvador on Monday, with the press release published yesterday. It follows the staff mission in November.

The press release doesn't add much more to what we already knew from the staff mission, and we await publication of the staff report (if the authorities consent to it) for more detail.

Nor does the conclusion of the Article IV change our view about the likelihood of an IMF programme (ie it is still unlikely, as we noted at the time of the Article IV mission). There was no mention of programme negotiations in yesterday's short press release, but more may be revealed in the staff report (if it is published).

But there were two key takeaways from yesterday's statement. First, the board urged the authorities "to narrow the scope of the Bitcoin law by removing Bitcoin’s legal tender status". The explicit advice builds on the staff's previous statement in the Article IV mission that said Bitcoin should not be used as legal tender because of the risks involved. Second, the press release noted that some directors "expressed concern over the risks associated with issuing Bitcoin-backed bonds". This is a reference to the authorities' announcement on 20 November of their intention to issue a US$1bn Bitcoin bond.

Directors did, however, agree on the importance of boosting financial inclusion and noted the role that the Chivo e-wallet could play in this.

Otherwise, the main focus of the policy discussion was the Fund's concern over fiscal vulnerabilities, which "need to be promptly addressed". These vulnerabilities stemmed from the high public debt stock and large financing needs. Public debt rose sharply due to the pandemic (from 71.3% of GDP in 2019 to 89.2% in 2020), before falling slightly last year, to 84.4%, according to IMF estimates. The IMF cautioned that high and rising financing needs will constrain medium-term growth and stressed the need to implement structural fiscal reforms. The IMF projected an overall fiscal deficit of 5.8% of GDP in 2021, down from 8.2% in 2020.

The statement noted that directors "generally agreed" (which might suggest this view is not uniformly held, and that some are more sanguine about fiscal risks) on the need to implement fiscal consolidation "starting this year". This should be based on high-quality revenue and spending measures. Thus, the IMF projects the overall deficit to narrow further this year, by c1ppt to 4.9% of GDP, with the primary balance being restored, after a deficit of 1.1% in 2021 and 3.8% in 2020, although this is only enough to stabilise the debt at 84.8% of GDP this year. Otherwise, under current policies, the IMF cautions that public debt is expected to rise to c96% of GDP in 2026, putting it on an unsustainable path.

This repeats the message from the Article IV mission. The mission noted that a fiscal consolidation package amounting to c4% of GDP over the next three years was needed to put public debt on a downward path (reaching c80% of GDP by 2026).

However, no further details were given yesterday and the macroeconomic forecasts were only given for 2022, not beyond, so it is difficult to infer what the IMF is now thinking. We will need to see the staff report for that.

With the policy discussion focused on the need for fiscal consolidation, the incoming fiscal data shows the overall fiscal deficit heading for a marked improvement last year. This helps the starting point for the fiscal effort, or conversely, could be used as an excuse for less urgency (either not to do more, or to take it more slowly).

The cumulative deficit on the non-financial public sector (NFPS) balance, including the pension deficit, in the first 11 months of last year (January-November) was running at around half what it was in 2020, according to central bank data. This implies an overall deficit of c5.3% of GDP at an annual rate, and, after allowing for the usual seasonal deterioration in December, on our calculations (the IMF says 5.8%). This compares with a deficit of 10.1% in 2020 (the IMF says 8.2%), due to the pandemic, and shows the deficit is returning towards its pre-pandemic level. The overall deficit was 3.1% in 2019, and averaged 2.9% over 2016-19. 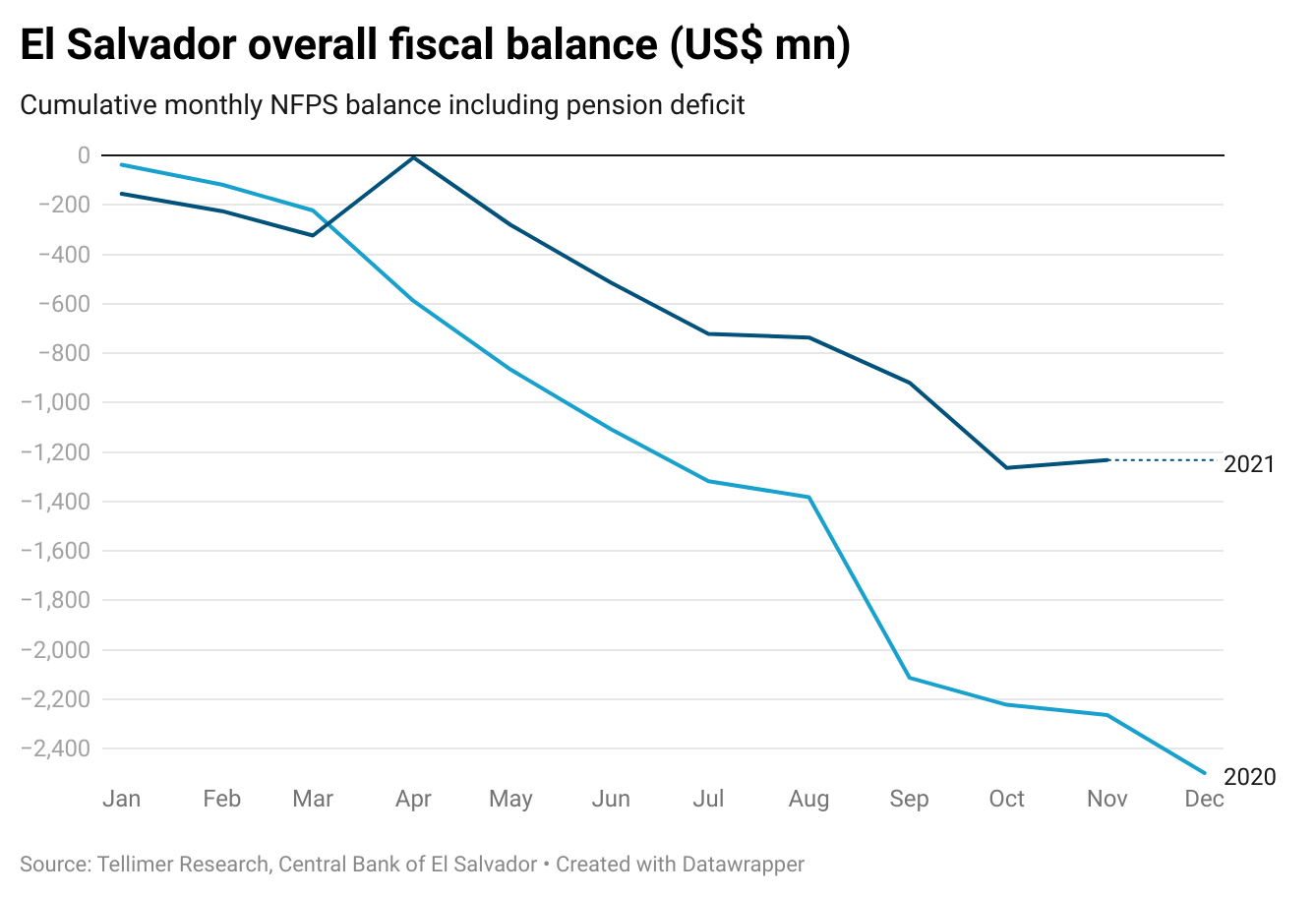 Such a strong fiscal performance seems at odds with the president's maverick approach, and has been achieved through a combination of revenue gains (+23% yoy over the period January-November), helped by the post-pandemic economic recovery (real GDP growth rebounded to c10% last year from -7.9% in 2020), and spending restraint (+2.3% yoy over the period January-November). The government projects real GDP growth of c4% this year, which is a bit more optimistic than the IMF (3.2%).

In addition, on the external side, family remittances rose to a record US$7.5bn last year, a rise of more than one-quarter (26.8%) from 2020, according to central bank data released on Friday. As a result, remittances continue to be El Salvador's main source of FX earnings. Goods exports rose 32% in 2021 to US$6.6bn, according to central bank data. 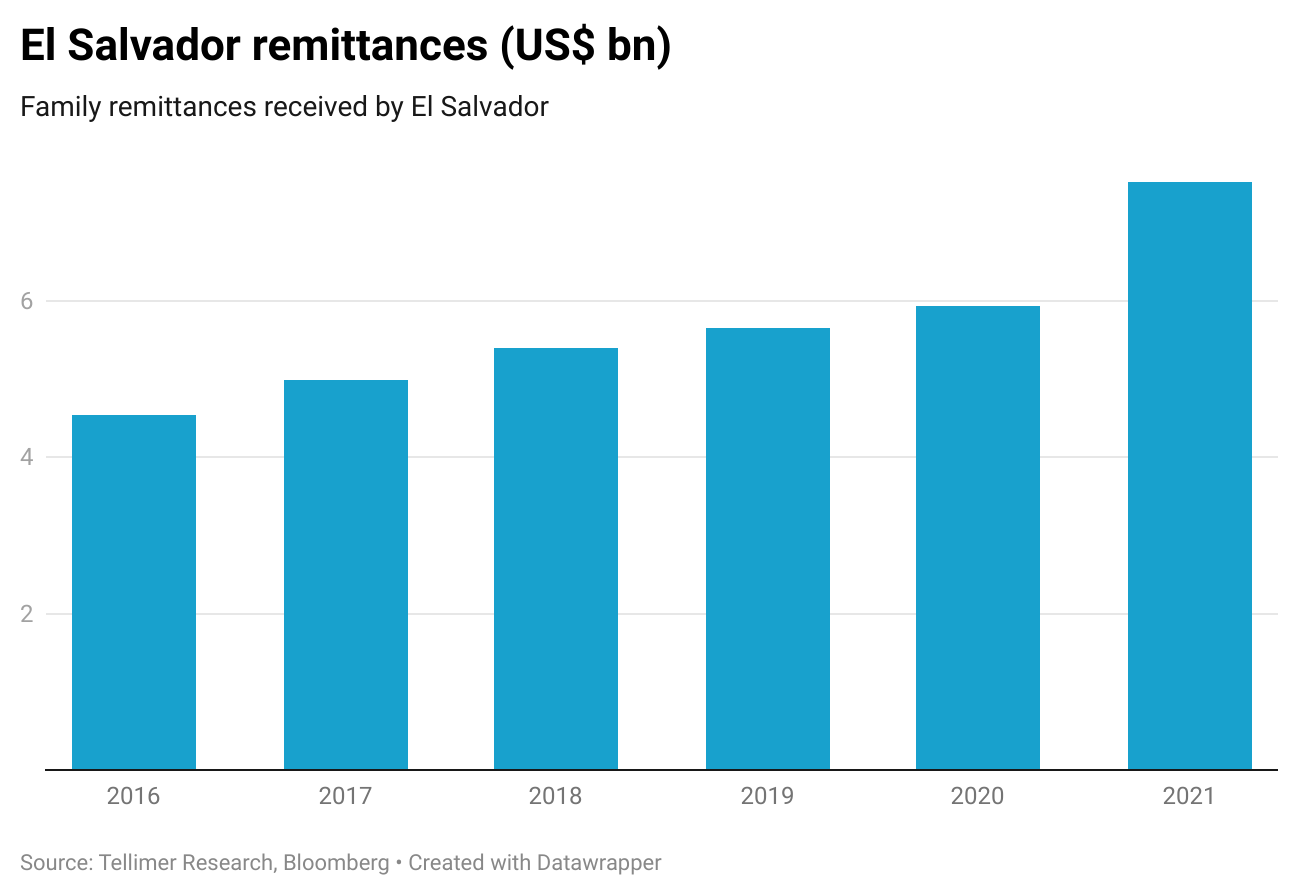 However, goods imports grew more strongly, probably due to the economic rebound, rising by 47% to US$15.1bn. This resulted in a significant deterioration in the trade deficit. The trade deficit widened by US$3.2bn (62%) to US$8.4bn (c30% of GDP). Of course, stronger remittances (c27% of GDP) will mitigate some of the impact of this trade deterioration on the current account, but not all of it.

Indeed, the IMF projected a sharp deterioration in the current account balance last year, with a deficit of 3.9% of GDP compared with a small surplus of 0.5% in 2020 (as import demand collapsed in the deep recession), and the deficit is expected to narrow to 2.5% this year. A wide current account deficit will put pressure on external funding needs.

Some positive data notwithstanding, this hasn't, however, translated into improved sentiment towards the bonds and they continue to struggle, absent a strong and credible policy anchor and better visibility over the financing outlook. Although ELSALV bond prices are down only a modest 3-5% YTD (to cob 25 January on Bloomberg, mid-price basis) on the '25s, '32s and '50s, and the '23s are down only 1%, compared with sharper declines elsewhere (eg Argentina, Ghana and Ukraine), this is partly because they had already fallen a long way last year. The longer bonds are down 15% over the past two months, and over 30% since the end of August, while the '23s are down 18% since August. 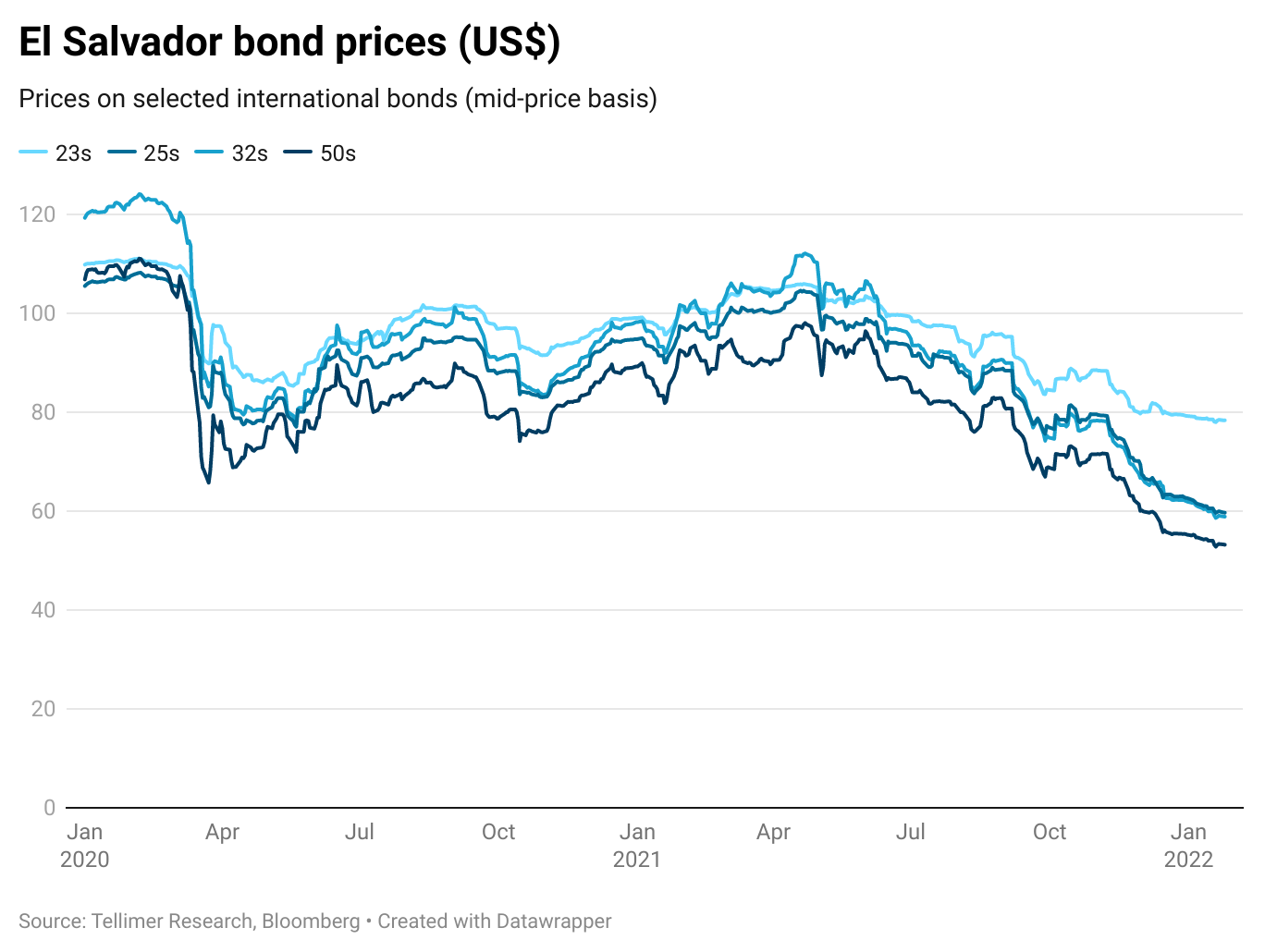 This comes after hopes of an IMF programme have all but ended, following the Article IV mission in November, and resulting policy and funding uncertainty, and the uncertainty around the implications of the country's adoption of Bitcoin as an official currency, despite the fiscal improvement last year.

Indeed, the market is pricing in a 65% probability of default on the '23s on our calculations (at a price of cUS$78.5). The '23s mature in 12 months, and there is no clear plan as to how they will be repaid.

We maintain our Hold on El Salvador bonds, with a yield on the 2032s of 16.7% (price of US$59.1) as of cob 25 January on Bloomberg (mid-price basis), after having missed most of the sell-off. We reiterated our recommendation most recently in our Top Picks for 2022, identifying it as a trade to watch for this year.

The marked fall in El Salvador bonds means prices are now mostly in line with even the most pessimistic recovery values in our restructuring scenario analysis. This assumed a 50% coupon haircut, no principal haircut and a five-year maturity extension on the 23s and 25s only, at a 10% exit yield. This suggests further downside could be limited.

However, risks remain and investors will be nervous ahead of the looming US$800mn maturity of the '23s (24 January 2023) without better visibility over how the government intends to repay it and its refinancing plans. The '23s offer over 20pts upside if they are paid. Alternatively, nervous investors may prefer the protection of the lowest cash price bonds, the '50s, at a price of US$53. 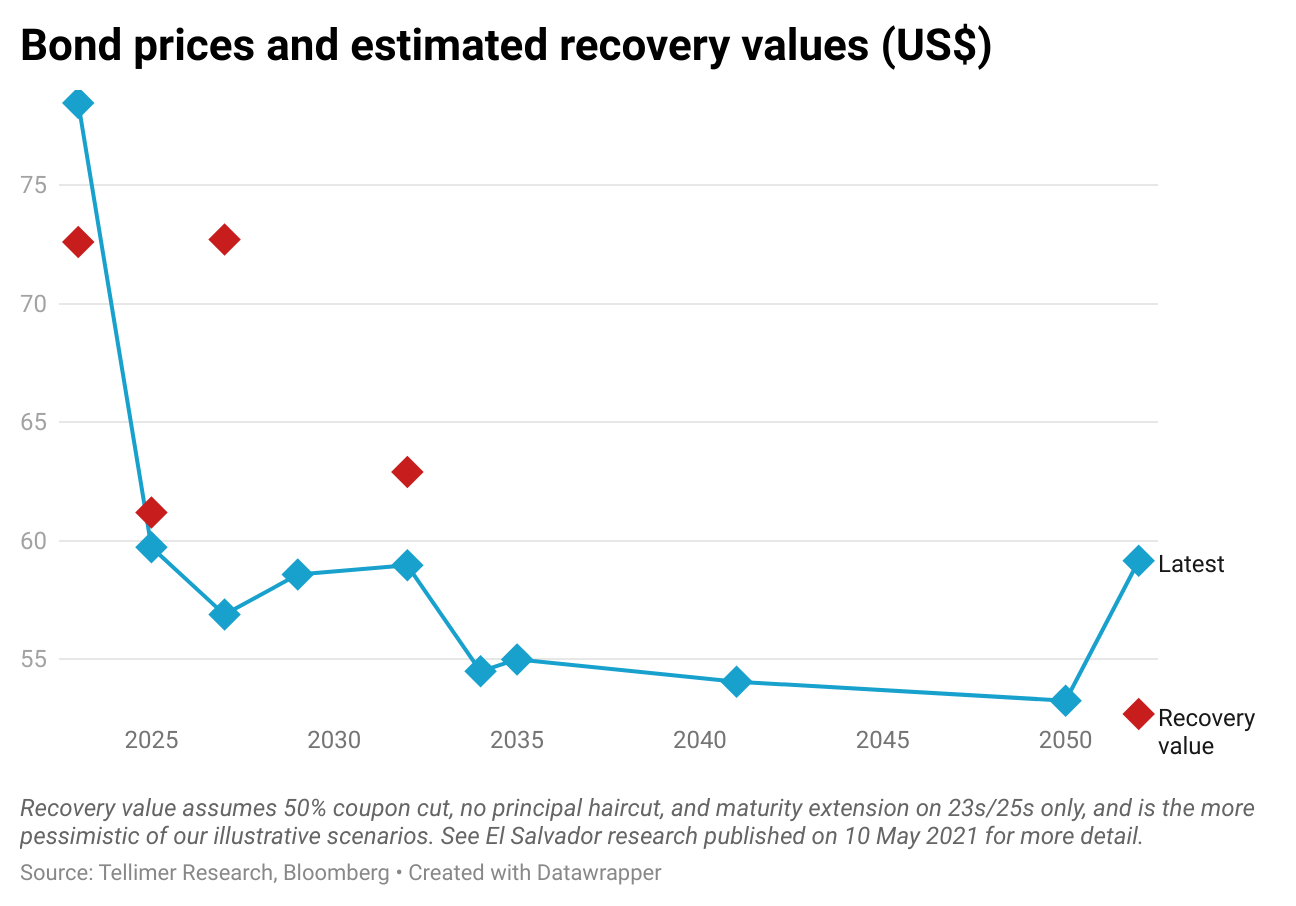