El Salvador launched a cash tender offer for its 2023 and 2025 global bonds on 12 September. It follows the government's announcement on 26 July of its plan for a partial bond buyback, although there have been few details concerning the operation released since then.

The extent of bondholder participation is not clear at this stage but, whatever happens, we think default concerns will persist. The deadline for the tender offer is 20 September.

Details of the offer

The size of the operation is smaller than expected. The aggregate amount allocated to the purchase is not to exceed US$360mn, compared with the US$500mn-600mn that was being reported at the time the government announced its plans (unless those reports were referring to a notional amount that could be purchased given distressed prices). The amount pretty much matches the reported amount of the SDR allocation (SDR275mn) which Congress approved for the transaction, which means the other main source of proceeds (the US$200mn CABEI loan) has not been used.

Having said that, the government did say at the time of the announcement that it aimed to buy back 20-30% of the bonds (which begs the question, why bother with so little, unless you have a plan, and what happens next?). 20% of the combined US$1.6bn notional outstanding in the two bonds (comprising US$800mn in each) is US$320mn.

Acceptance of the tender may be pro-rated if the amount to purchase exceeds the allocated amount. No priority is given between the notes, and El Salvador reserves the right to accept only a portion of notes tendered, or none at all, and to extend or terminate the offer at its discretion. 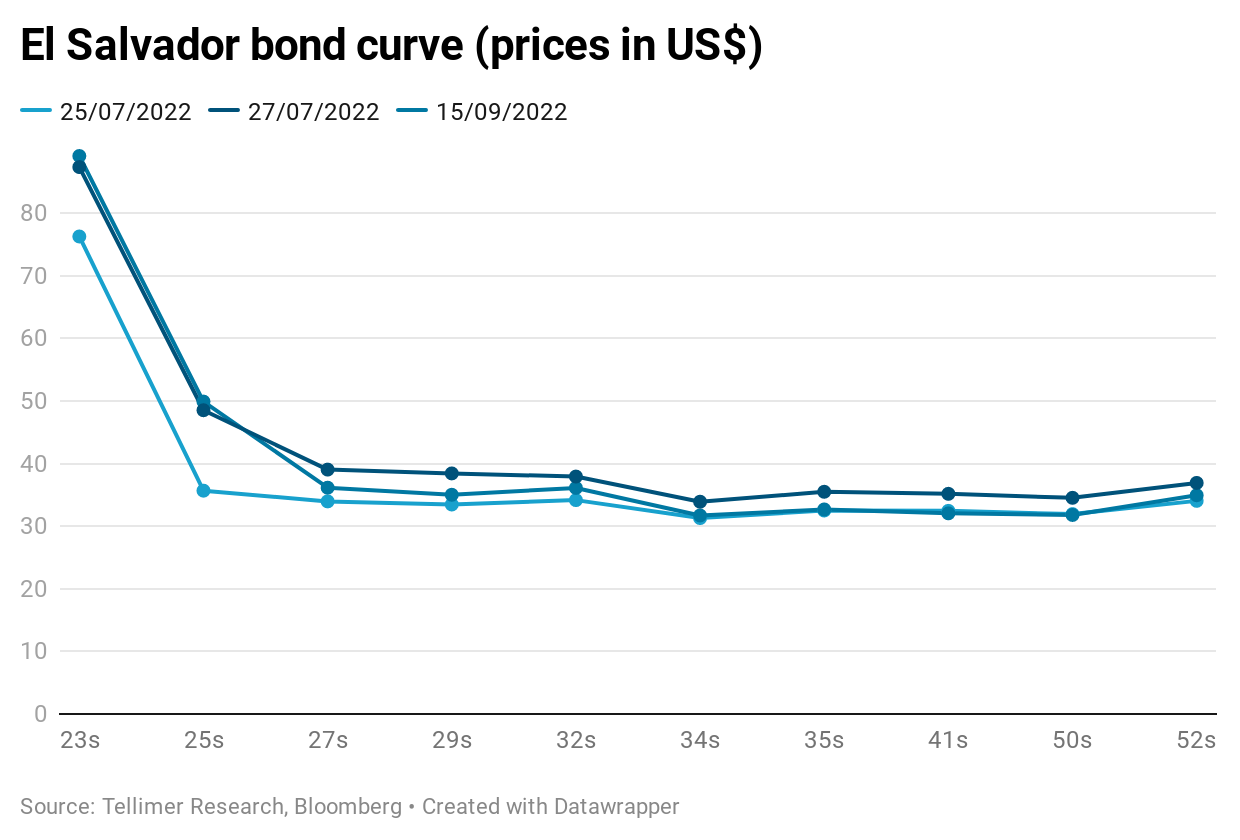 The level of participation is still unclear and investors are caught in the classic prisoner's dilemma. Holders may have the incentive not to participate, hoping that others will, so that they come to represent such a small rump of the remaining bond that it is not worth the government defaulting on them (ie holdout for par). However, if too many holders hold out, the government won't be able to retire much of the existing bonds and default concerns will intensify, making everyone worse off.

We wonder if a price of US$91 on the '23s is sufficiently close to par not to take the risk of holding out, because default concerns aren’t going to go away even after the tender, so incentivising '23s to participate (but sacrificing 9pts by doing so). However, conversely, if the operation serves to demonstrate the government's willingness to pay, '23s may want to hold out to get par in January (why sacrifice 9pts?).

Hence, the buyback may favour the '25s. The more distressed the price, the more the authorities can retire for a given sum. Hence, with the '25s more distressed, the authorities can retire a greater amount of notional bonds of the '25s than '23s for the same aggregate amount allocated to the purchase, especially if maximising the amount it can purchase (that is, reducing the outstanding by the most) is its objective.

For illustrative purposes, we calculate, under the assumption that all the money goes to repurchasing the '23s, the notional amount retired would equal US$396mn (=360/0.91), excluding accrued for simplicity. So that would still leave half the total amount of the '23s outstanding – and with it, questions about how the authorities would manage the rest. On the other hand, if we assume all the money went to repurchasing the '25s, the notional amount retired would be US$667mn (=360/0.54), a much bigger proportion of the outstanding. That would be good news, in terms of reducing default risk on the '25s, but it does not reduce (let alone eliminate) default risk on the US$800m of the '23s, and leaves fewer resources to tackle it. 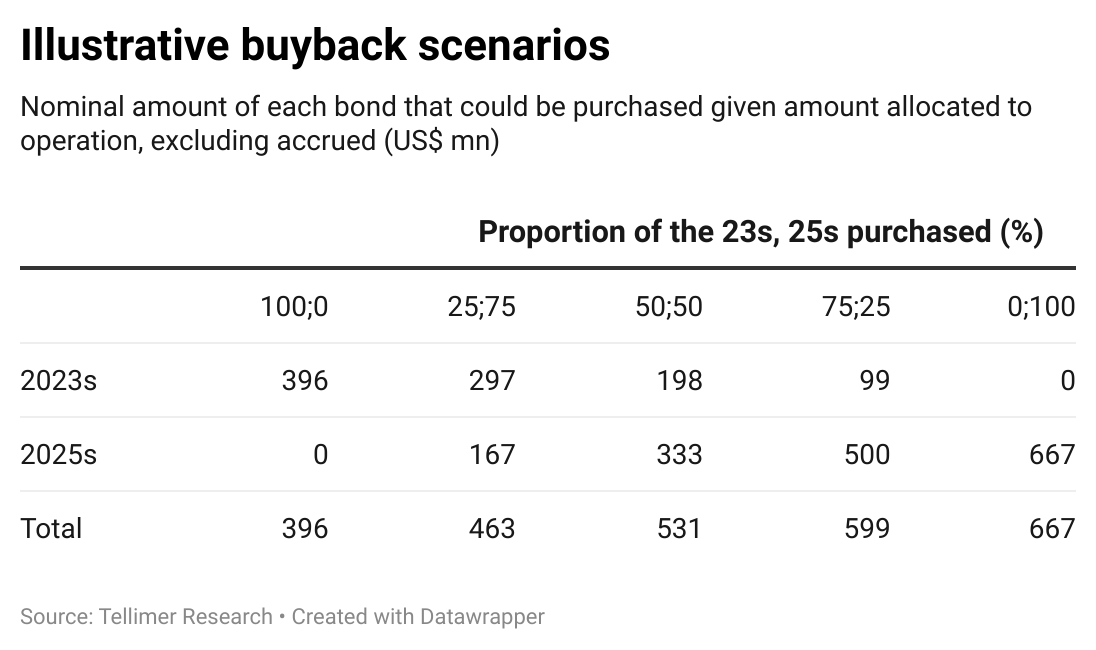 Either way, it seems to us that there is still going to be a reasonable amount left of the '23s, such that default concerns will likely persist post-buyback (continuing over the next four months), leading to questions over how the government will repay the final maturity in January. We think the authorities may be able to find other sources (the CABEI loan, local issues, raiding pension savings, drawing down international reserves, and looking to friends and crypto-supporters), but the lack of visibility over funding sources will continue to weigh on the curve.

Such concerns are reflected in Fitch's downgrade of El Salvador from CCC to CC on 15 September (Moody's Caa3/S&P CCC+). It argues that the country's tight fiscal and external liquidity positions and extremely constrained market access amid high fiscal financing needs and the upcoming bond maturity make a default of some sort probable. The buyback, it says, will likely further weaken its already strained liquidity position. The size and scope of the transaction do not materially alter the probability of default, in Fitch's opinion.

Fitch estimates fiscal financing needs of US$3.7bn from September 2022 through January 2023. This comprises a US$1bn fiscal deficit, US$1.2bn in amortisations (including the US$800mn bond maturity) and US$1.5bn in short-term debt. Short-term debt will most likely be rolled over, although expected multilateral disbursements have been slow to materialise. Fitch estimates an unidentified financing gap of nearly US$900mn.

Meanwhile, Fitch argues that El Salvador's external position has weakened amid a high current account deficit and upcoming external amortisations. It forecasts a current account deficit of US$2.4bn this year (7.8% of GDP) and estimates US$400mn in external amortisations (besides the US$800mn due in January). It expects external disbursements and SDRs to cover US$1.4bn, with cUS$700mn in FDI and some private bank inflows. This leaves an unidentified gap of cUS$1bn.

We note, however, that fiscal performance has improved this year, although the current account has deteriorated. A lower fiscal deficit, other things equal, will reduce fiscal financing needs. 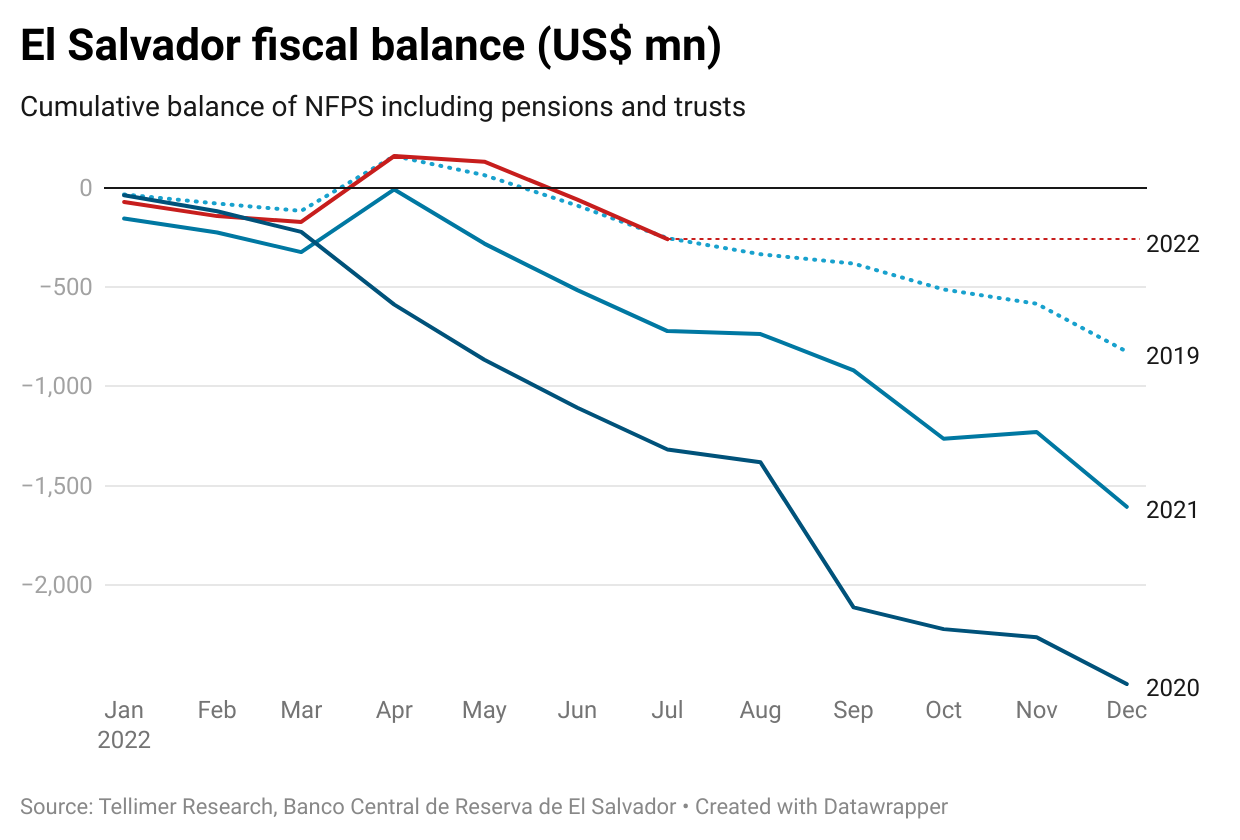 The explanation for the significant fiscal improvement seen so far this year – and if it will last – is not clear to us, whether it is cyclical (growth) or policy based (due to fiscal measures), although it seems to be driven by higher revenues and spending restraint. Comparing the first seven months of this year with last year, revenue has increased 16% yoy while expenditure has increased by 4%.

However, the current account deficit has risen nearly threefold, reaching US$703mn in Q1 2022 compared with US$245mn in Q1 2021. That would result in an overall deficit of US$2.8bn this year on an annualised basis (or US$1.9bn on a trailing 12-month basis), compared with US$1.5bn in 2021, with the trade deficit widening by cUS$1bn to US$9.4bn. Net services improves (mainly due to travel), although primary and secondary income balances deteriorate. Travel receipts (ie tourism) rose 50% yoy in Q1 2022. 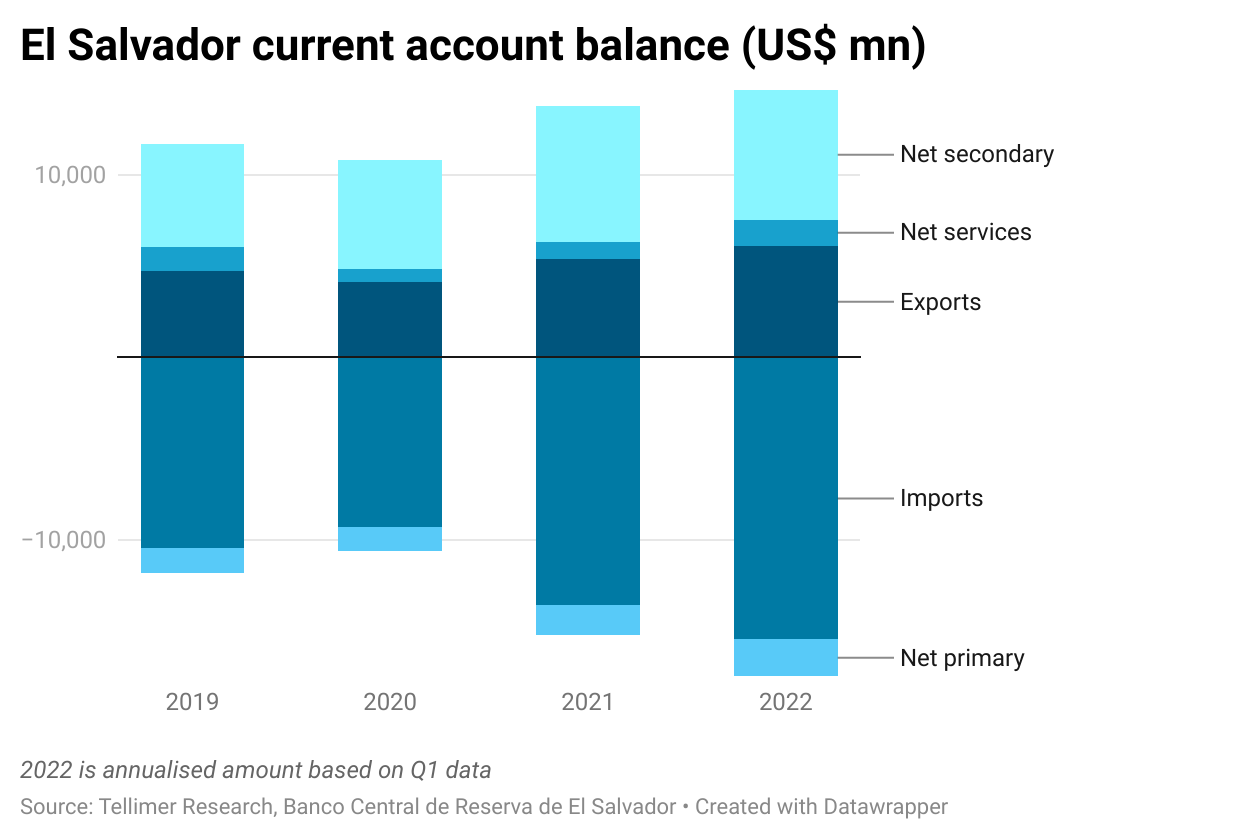 In particular, it is still not clear if the authorities can avoid a default on the '23s in January. To the extent that the buyback reduces the amount outstanding of the '23s, and signals the government's willingness to pay, it may alleviate default concerns but we don't think it will eliminate them, as the government scrambles around to find other resources to make the final payment. Conversely, even though it may help retire more of the '25s, the operation still leaves the government in a weaker liquidity position in the near term. That said, with longer bonds already at such distressed prices, the downside in the event of an actual default may be limited (with the '23s and '25s more exposed).

Instead, ensuring debt sustainability will depend on a credible medium-term fiscal strategy and structural reform agenda, which is still sadly lacking. Hence, the rest of the sovereign curve may remain under pressure (as we've seen, since the buyback was announced, the longer bonds haven't moved). 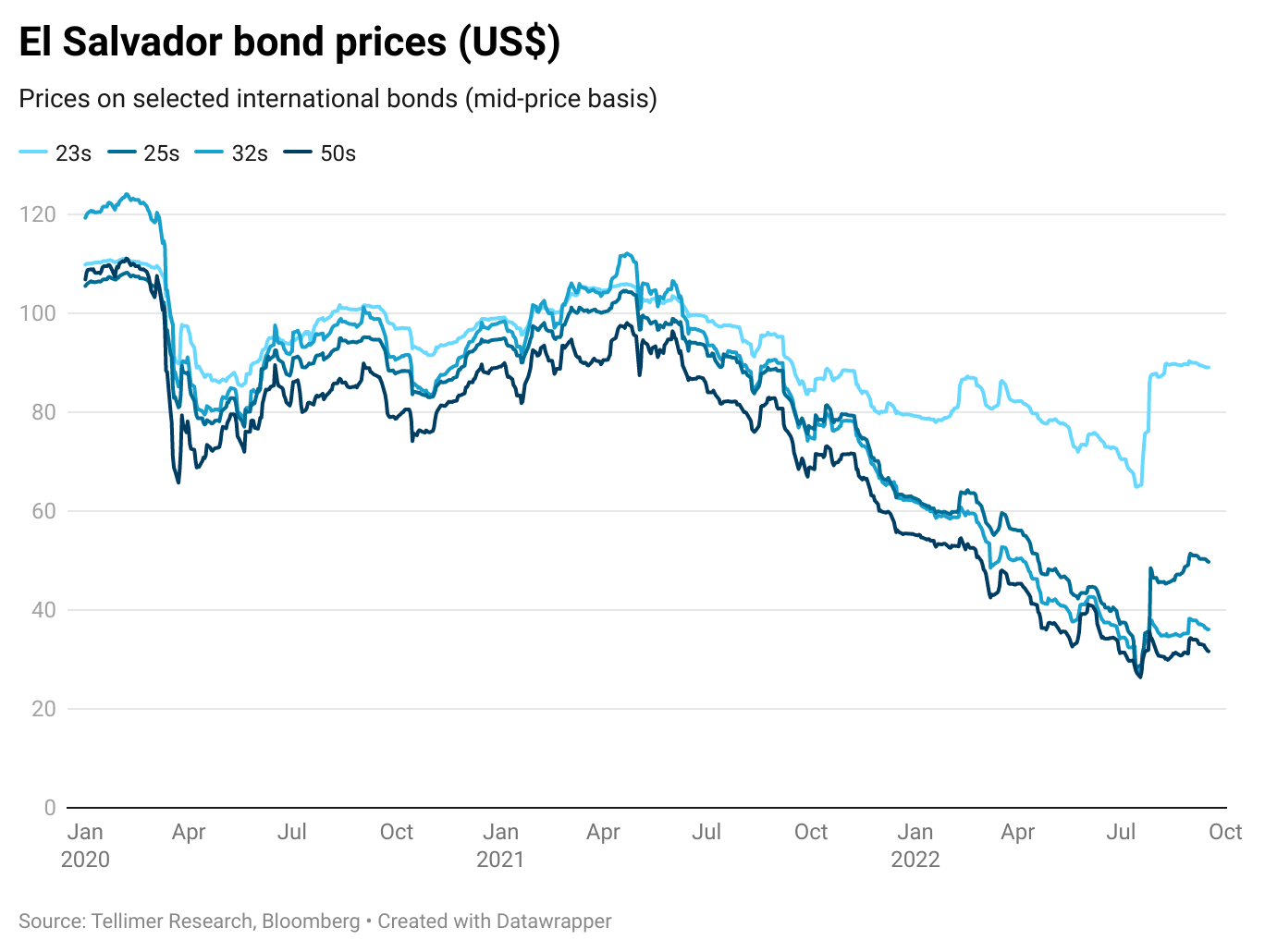