The IMF issued a statement on 22 November following the conclusion of the 2021 Article IV mission. In our view, it has two important messages for the authorities in their hunt for an IMF programme, which – we think – pretty much rules one out in the foreseeable future (if indeed, there was any doubt). This may however not be a surprise, with bond prices (around the US$70 level, except for the 23s) suggesting that investors have already factored in this conclusion, and the authorities no doubt having realised this too.

Recall that El Salvador has been talking about an IMF programme for most of this year, with Finance Minister Alejandro Zelaya confirming in early March that programme talks, on a US$1.3bn three-year Extended Fund Facility (EFF), were underway.

The two key messages from the Article IV discussions are:

There was however no mention of when the Article IV review would go to the Board, although normally this might be expected to happen in six to eight weeks. Nor does the statement explicitly say that a programme is off the table.

That the Article IV mission was happening was well known, as it had been presaged in IMF press briefings, most recently last week's, and we had anticipated that it would provide an opportunity for the Fund to set out in more detail what it thinks about El Salvador's adoption of Bitcoin as a legal currency – over and above its previous broad-brush comments – and what it might mean for the programme.

The statement notes that, despite the impact of the pandemic, pro-active policies helped limit the extent of the resulting economic contraction to 7.9% in 2020 while supportive policies, buoyant external demand, and continuous growth in remittances are fuelling a strong recovery. Real GDP is expected to grow by 10% in 2021 and 3.2% in 2022.

However, vulnerabilities are rising. Persistent fiscal deficits and high public debt service are leading to large and increasing gross fiscal financing needs. Gross fiscal financing needs are expected to be elevated in the medium term and increase to c20% of GDP by end-2025 due to eurobond amortisation payments. Meanwhile public debt (including pensions) is projected to have increased during the pandemic by 14ppts to c85% of GDP by end-2021, and is expected to exceed to 95% of GDP by 2026 on unchanged policies. NPLs have also increased while the reserves to import ratio is expected to fall below three months due to the rise in imports.

Crucially, the IMF noted that a comprehensive economic strategy is needed to ease constraints on growth while lowering borrowing costs.

Moreover, it said that "a well-articulated fiscal consolidation strategy, supported by high-quality measures amidst a coherent medium-term framework, is critical to restore fiscal sustainability." The IMF noted that the proposed 2022 fiscal deficit of 4.5% of GDP is high, taking into account the much-improved cyclical economic position and high borrowing costs.

Staff recommended implementing a fiscal consolidation package based on high-quality measures amounting to about 4% of GDP over the next three years. This would be enough to restore fiscal sustainability, putting public debt (including pensions) on a downward path, reaching about 80% of GDP by 2026. Measures should be distributed between revenue and spending (a 2.6% spending and 1.4% revenue split was mentioned at the IMF press briefing on 18 November), with emphasis on fast-yielding permanent measures like raising taxes on goods and services, better targeting subsidies, and realigning the public sector wage bill with private sector comparators.

However, the IMF statement did not mention the authorities' appetite for pursuing such an adjustment.

On Bitcoin, which El Salvador adopted as a legal tender on 7 September 2021, the IMF stated unequivocally that "Bitcoin should not be used as a legal tender" because of the risks involved. The IMF noted that given its high price volatility, its use as a legal tender entails significant risks to consumer protection, financial integrity, and financial stability, and also gives rise to fiscal contingent liabilities. We think this is the most definitive statement yet from the Fund on the issue, and would appear to put programme discussions in a difficult place (whether because it is seen as a breach of membership articles, although this is unclear to us, or because of the policy implications around it).

While now more definitive, the IMF's statement on El Salvador's Bitcoin use is however consistent with what it has said previously. The Fund had warned earlier that the risks and costs outweighed its potential benefits.

However, the IMF also noted that the authorities' recently announced plans to issue sovereign bonds and use the proceeds to buy Bitcoin and fund infrastructure plans came too late to be factored into the discussions.

The government announced on 20 November that it intended to issue a US$1bn Bitcoin bond, which investors have taken as a sign that the authorities have now also given up hope of an IMF programme (the timing may not be a coincidence, with the authorities perhaps knowing the outcome of the Article IV review would make a programme difficult and a Bitcoin bond is its response to bridge the funding shortfall). Bonds have fallen as a result this week.

We maintain our Hold on El Salvador bonds, with a yield on the 2032s of 13.8% as of cob 23 November on Bloomberg (mid-price basis). However, yields have risen by over 70bps this week, driven by the authorities' announcement of a Bitcoin bond, and by 400bp since early September, with a total return YTD of -22.8% compared to -2.4% on the Bloomberg EM Aggregate index. The inverted yield curve has also steepened with shorter bonds (the 23s) now yielding over 27% (+900bps this month).

The marked fall in bond prices may now bring them more into line with some estimates of expected recovery values in certain scenarios but risks remain. Prices are now well below our expected values calculated in May, given the decline in the probability of the IMF programme scenario, and are now (with the exception of the '52s) roughly in line with our scenario of a nominal haircut (17.5%); in fact, prices in the middle of the curve are a few points below our estimated recovery values even in this scenario.

However, there is downside risk from here, both in terms of what a restructuring might look like and timing (how long it may take to get there), although El Salvador remains current on its bonds which may cushion prices to some extent. But there is also upside if the "muddle through without the IMF" scenario can be sustained. This will rely on alternative financing sources (such as the Bitcoin bond plan), on which however there is little visibility at this stage and they may not be viable. 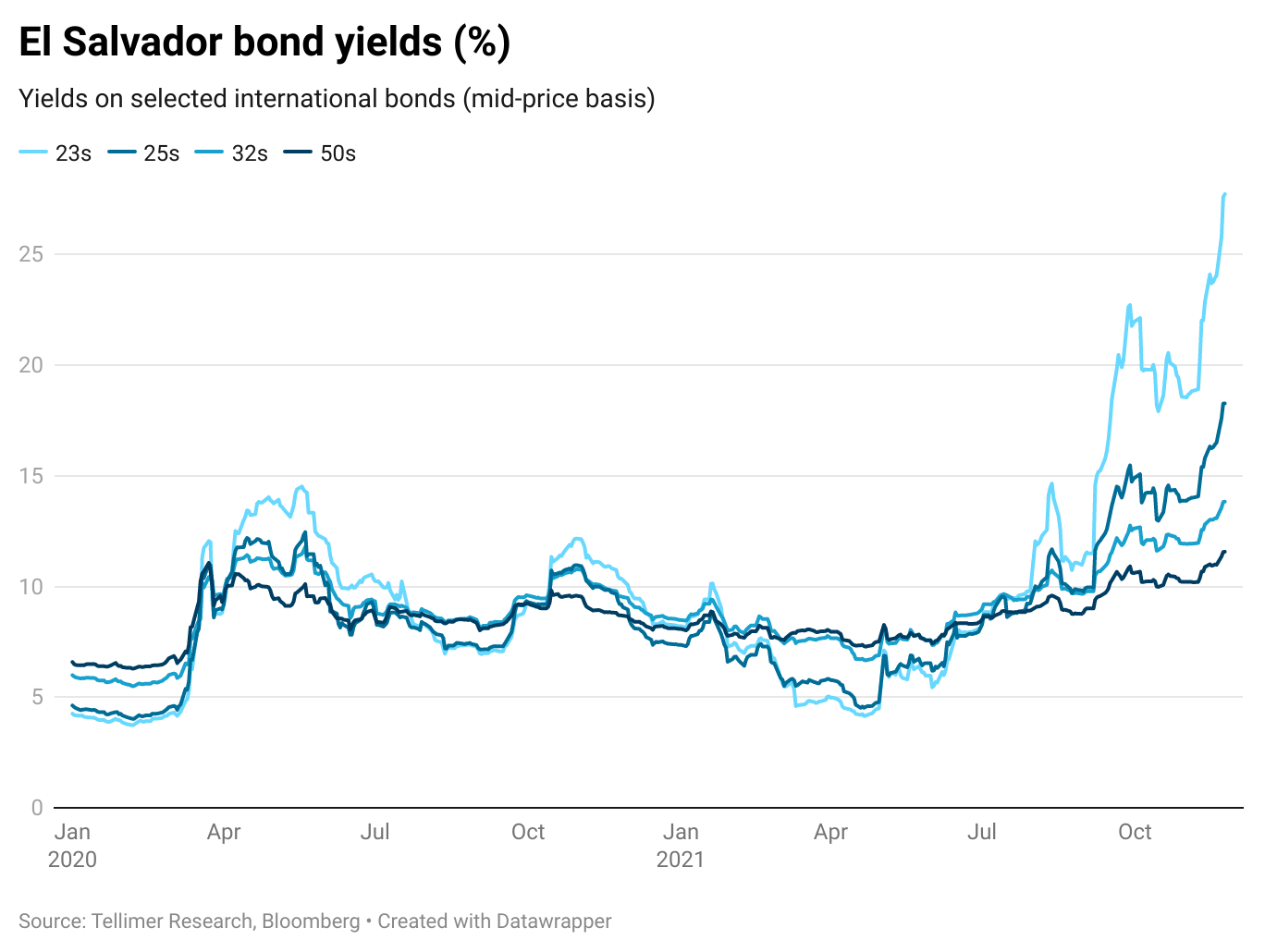