The Fed did no favours for the greenback as Chairman Jerome Powell poured cold water on speculation of earlier tapering of bond purchases. Additionally, the Fed continues to see coming inflation as transitory and unlikely to result in runaway price increases such that the central bank would need to intervene with rate hikes.

The vast fiscal and monetary stimulus delivered to the US economy over the past year, resulting in deficits in both the current account and government budget balance, should still see the USD lose value looking further out, while the Fed’s continued dovish communication and limited rate hike expectations continue to take the shine away from the USD.

All in all, the Fed is sticking to its narrative that monetary policy tightening will continue to go undiscussed in the near future, with its justification being that unemployment remains far from target levels. This was despite a more upbeat view on the economy, noting that progress on vaccinations and strong fiscal and monetary stimulus has propelled indicators of economic activity and employment.

While US economic outperformance will keep investors cautious as to future policy changes, in the meantime emerging market currencies with their higher real yields on offer should continue to be supported by flows from the developed world.

Mozambique: Mozambique received a financial boost from the World Bank on Wednesday to aid the fight against the insurgency in the northern province of Cabo Delgado, which has resulted in a humanitarian crisis and thrown a shadow of doubt over the country’s hopes of becoming a global LNG player. The international lender announced yesterday that it had approved Mozambique’s eligibility to the Prevention and Resilience Allocation, which will unlock up to $700mn in funding to further prevent the escalation of conflict and build resilience in Mozambique. While Mozambique could have access to up to $700mn in funding from the World Bank, reports suggest that the first tranche will come in the form of a $100mn grant. The grant from the World Bank will be viewed in a positive light by investors as it should boost the government’s ability to defeat the insurgents and restore calm in the mineral-rich province of Cabo-Delgado, which is home to $60bn worth of LNG projects.

Botswana: The Bank of Botswana is set to deliver its rate verdict today. Recall at the last Monetary Policy Committee (MPC) meeting in February, the Bank of Botswana decided to keep the benchmark interest rate unchanged at a record low of 3.75%, marking the second meeting it has done so. The decision to leave the policy rate unchanged was driven by the need to support the economic recovery against the backdrop of a benign inflation environment. Since the last MPC meeting, headline inflation in Botswana has quickened to move back within the central bank’s inflation target of 3.00% to 6.00% in March. Looking ahead, the central bank has said that it expects inflation to rise towards the upper end of its target range partly due to transitory factors, such as value-added tax, sugar tax and fuel levy. While inflation is expected to edge higher in the coming months, we believe that the central bank will maintain its current policy stance at today’s meeting.

Africa: Following increased talk of Africa lagging in receiving vaccinations, German biotechnology company BioNTech SE is discussing the possibility of COVID-19 vaccine production sites in Africa to expand the company’s supply network in regions around the world. The Chief Executive Officer Ugur Sahin was in the scrollers saying that he met with representatives from Gavi, the Vaccine Alliance, yesterday about how to make more shots available in low-income countries. As it stands, only a handful of African countries are able to produce vaccines. Therefore, setting up more vaccine production sites will help countries gain access to vaccines.

Kenya: Kenyan Health Secretary Mutahi Kagwe announced the suspension of flights to India for two weeks following the surge in daily coronavirus infections in recent weeks. The suspension will come into effect from midnight Saturday. However, cargo flights shall remain in service subject to observation of transport protocols. India has been amongst the worst-hit countries recently after recording daily COVID-19 infections above 350k, leaving the healthcare system overwhelmed to the point of a humanitarian crisis. All passengers arriving in Kenya from India within the next 72hrs will be subject to rapid antigen testing upon arrival and shall be required to a 14-day quarantine.

Uganda: In a statement issued by the Ugandan parliament, the country’s finance ministry said that it wants lawmakers approval to borrow $99.6mn from the International Find for agricultural development and $30mn from the OPEC Fund for International Development for an oilseed project. The funding will be used to support Uganda’s goal to double its national palm oil production to as much as 80k tons. The continuous borrowing will however increase the government's debt servicing costs and steepen the country’s fiscal trajectory.

The spotlight in Northern Africa yesterday was squared on the Central Bank of Egypt as it delivered its latest interest rate verdict. In line with consensus expectations, the Monetary Policy Committee voted in favour of keeping the benchmark interest rate unchanged at a record low of 8.25%. Yesterday’s decision marked the fourth consecutive meeting that policymakers have opted to leave its benchmark interest rate on hold. It is also worth noting that the Central Bank of Egypt stood pat on the lending rate, leaving it at 9.25%. 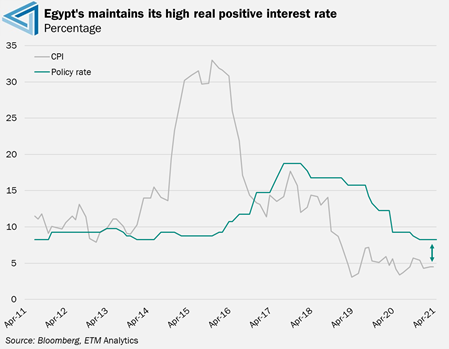 The Monetary Policy Committee decision was underpinned by the stabilisation of inflation and the economy showing signs of recovery after more than a year of the COVID-19 pandemic. In its statement accompanying the decision, the Central Bank of Egypt said that leading indicators point towards a recovery in economic activity towards pre-pandemic levels. Furthermore, the central bank said that the decision to keep the policy rate unchanged is consistent with achieving its inflation target of 5.00% to 9.00% in Q4 of 2022 and price stability over the medium term.

Unlike most sovereign bond curves, Zambia’s shorter-dated 2022 Eurobond yield is trading at a significant premium to its longer-dated 2027 Eurobond yield, reflecting the combination of severe short-term fiscal challenges and concerningly high inflation. The inverted market structure is reflective of a country facing a high risk of fiscal distress. For context, Zambia’s 2022 Eurobond is currently trading a whisker below the 45.0% mark, while the 2027 Eurobond yield is hovering around 19.5%. Note that Zambia has amongst the highest Eurobond yields in the world, reflecting the country’s dire fiscal position. 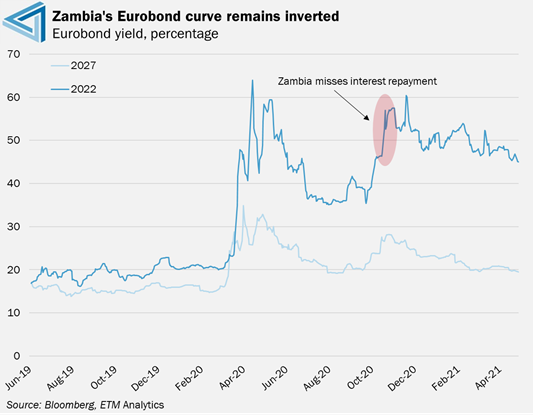 Recall that Zambia is effectively in default after failing to repay a $42.5mn Eurobond repayment in October last year, becoming the first African nation to default on its debt in the COVID-19 era. This resulted in a double sovereign credit rating downgrade with both Fitch and S&P Global slashing Zambia’s rating to one of a country in default. Fitch also withdrew ratings on Zambia’s 2 remaining Eurobonds, on the assumption that either missed repayments or a new restructuring plan would also see these fall into default.

Zambia’s public debt pile has been spiralling out of control in recent years due to fiscal mismanagement and wasteful spending. Zambia’s fiscal degradation was amplified last year as the COVID-19 pandemic stifled revenue intake and pushed lawmakers to ramp up expenditure to bolster the healthcare system and cushion the economy from the devastating effects of the coronavirus outbreak.

A report published on Wednesday by the Finance Ministry revealed that Zambia’s total revenues and grants were below target by 10.1%, projected at ZMW 75.04bn for the 2020 fiscal year. Zambia’s total expenditure meanwhile came in 14.3% above target in the 2020 fiscal year. The Finance Ministry noted that Zambia’s fiscal deficit outturn came in at 14.4% of GDP against a target of 5.5%.

On balance, while the government has shown signs that it is looking to adopt a more prudent approach to managing its debt by approaching the International Monetary Fund (IMF), Zambia’s fiscal outlook remains worrisome. Therefore, we expect investors to continue demanding massive premiums for holding Zambia sovereign debt going forward. There may however be a light at the end of the tunnel with the IMF recently stating that it hopes to conclude a deal with Zambia before the elections in August on an economic program that will form the basis of the nation’s planned debt restructuring.

Macroeconomic: Oil extends its gains to a third straight session supported by a weaker USD

Oil has extended its gains to a third straight session this morning, nearing a six week high as rising demand in most major markets offsets any concerns about rising COVID cases in the likes of India. The front-month Brent contract is trading just below $67.50 per barrel as a result, while WTI has reached the $64 mark. Improving demand dynamics in the US were highlighted by the official IEA data yesterday that showed petroleum inventories falling through the week ending 23 April to their lowest level since March last year. 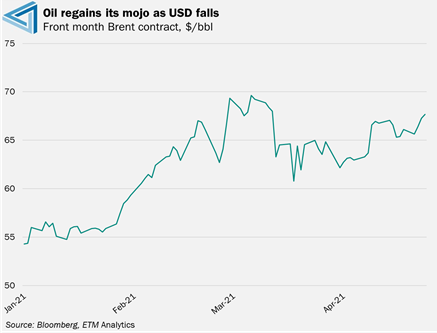 In China, the looming extended holiday period starting this weekend will drive demand for fuel as mobility levels will surge to an expected record high. Despite this, there are still downside risks for the global market as COVID cases are surging in India, Brazil, and Japan. The impact of the outbreak in India could see a global market surplus build in the near term, with a 1.4mn barrel a day surplus estimated for May. As a result, the Brent prompt spread has narrowed but remains in backwardation, suggesting the market’s bullish outlook is now being pared to some degree.