A rebound in risk appetite this morning has seen US Treasuries reopen with some losses. Short-end notes have led the sell-off with yields on the 2yr rising by more than 10bp so far to 2.94%. This has come off the back of news that the US may be looking to roll back some of the tariffs imposed on China during the Trump era. This will be positive for economic growth and thus has helped drive a push higher for yields at the front-end of the curve. Longer-dated yields have also risen but not to the same extent, indicating that recession risks are still being priced in. 10yr US yields have risen by just over 7bp on the session thus far, with the 2v10 spread actually inverting once again in early trade this morning. This is the second brief inversion since mid-June and we could see another occur shortly with inflation pressures still the focal point of financial markets.

As expected, the RBA hiked rates by 50bp this morning. The central bank, therefore, has implemented its first ever back-to-back 50bp rate hikes in order to contain rising inflation pressures within the economy. The bank also signalled that more rate hikes are to come. The market has priced in three more 50bp rate hikes over the next three months according to interest rate swaps, although this may be looking a bit stretched given the demand-side damage that the current hikes will be doing based on how leveraged Australia’s economy is at the moment.

Ghana: Minister of Information Kojo Oppong Nkrumah yesterday said that International Monetary Fund officials are expected to visit Ghana from July 6 to start consultations with the government over a bailout program. Nkrumah added that negotiations would last around nine months, with Finance Minister Ken Ofori-Atta leading the Ghana team. Ghana last Friday reversed a policy decision not to seek assistance from the IMF. The IMF last said it “stands ready to assist Ghana to restore macroeconomics stability, safeguard debt sustainability, promote inclusive and sustainable growth, and address the impact of the war in Ukraine and the lingering pandemic.”

Kenya: The latest data from the Central Bank of Kenya (CBK) showed that Kenya’s foreign exchange reserves declined for the second straight month to $7.98bn in June. That’s the lowest level since March 31, when the CBK held $7.84bn. According to the CBK, current reserves are sufficient for 4.74 months of imports which is above the bank’s requirement of four months. Reserves in Kenya have, in part, fallen as the CBK tries to intervene in the FX market to slow the rate of depreciation in the Kenyan shilling.

Kenya: Kenya is seeking KES75bn ($636mn) via a syndicated loan to pay for road works. According to the Kenya Roads Board Director-General, the loan will be raised within 30 days and is a short-term facility to pay amounts overdue to road contractors. The director-general added that the loan is expected to be priced about 100bp above prevailing Treasury bill rates and will be refinanced with a bond in a year or two.

Mali: After Mali’s military rulers proposed a 24-month transition to democracy and published a new electoral law, the Leaders of the Economic Community of West Africa States lifted economic and financial sanctions imposed on the country. The removal of financial and economic sanctions will be welcome, given Mali had defaulted on over $300mn of its debt due to sanctions that cut it off from the regional financial market and the regional central bank.

Uganda: The Bank of Uganda yesterday announced that it will hold a special meeting of its monetary policy committee on Tuesday, July 5, 2022, and will issue a statement afterwards. No further details were provided. The announcement has triggered speculation that the BoU may hike its policy rate after the war in Ukraine further upended global supply chains and caused inflation to surge. The meeting comes days after a report showing core inflation exceeded the central bank’s 5% medium-term target for a second straight month in June. The monetary policy committee MPC usually convenes every two months. The most recent meeting was on June 2, where it hiked its policy rate for the first time since 2018 to counter accelerating inflation and support the weakening currency.

Nigeria’s foreign currency reserves rose to $39.12bn in June from $38.48bn in May. While foreign reserves improved, it is worth highlighting that they have dropped in four out of the past six months and by 3% since December 2021. The broader decline in reserves comes on the back of CBN intervention to prop up the naira and dwindling oil production due to oil theft in the Niger Delta, which has prevented Nigeria from capitalizing on the higher-than-normal oil prices. The Nigerian Upstream Petroleum Regulatory Commission recently reported that Nigeria lost $1bn in revenue during the first three months of 2022 due to crude oil theft. 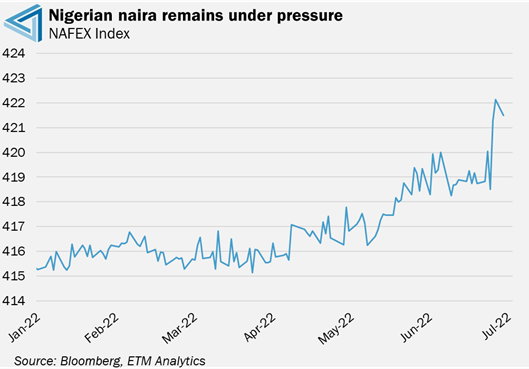 Higher demand for dollars amid low supply has also put pressure on Nigeria's reserves. The CBN has implemented dollar rationing, which has forced individuals and firms to turn to unauthorized dealers to meet their foreign exchange requirements, plunging the naira to a record low of around NGN 615 per dollar in the parallel market. This has widened the premium between it and the official naira, which closed at NGN421.5 per dollar yesterday, to around 46%.

Expectations that pre-election demand for dollars could further pressure the naira in the parallel market, in addition to existing challenges, suggest that the CBN could once again devalue the currency. Since 2020 the CBN has done so in a bid to narrow the spread between the official and parallel market rates. The naira is overvalued by over 10% on a real effective exchange rate basis, suggesting room for depreciation exists.

Fixed Income: Egypt kicks off the seconds half of the year with outsized sovereign debt issuances

In a bid to bridge its budget shortfall, the Egyptian government plans to ramp up debt issuance this month. Following the issuance on Sunday, where the CBE sold T-bills and bonds worth EGP 35bn over three tranches, the Central Bank of Egypt issued EGP 21.50bn at an auction on Monday. The central bank sold EGP 14bn in 91-day T-bills maturing on 4 October and EGP 7.50bn of 273-day T-bills maturing on 4 April 2023. The central bank also sold EGP 500mn of 7-year bonds and EGP 7bn worth of 2-year bonds.

The debt issuance over the past two days forms part of the government’s plans to sell EGP 251bn in T-bills and bonds in July, which equates to roughly $13.32bn. While the planned issuance is significant and may concern fiscal hawks, it is worth pointing out that Egypt’s budget deficit during the fiscal year 2021/22, which ended on 30 June, decreased to 6.1% from 6.8% in 2020/21. Moreover, the debt service bill decreased to 32.8% in the 2021/22 FY from 35.8% in the previous fiscal year. Revenue growth increased by 20%, while expenditure growth increased by 15%. 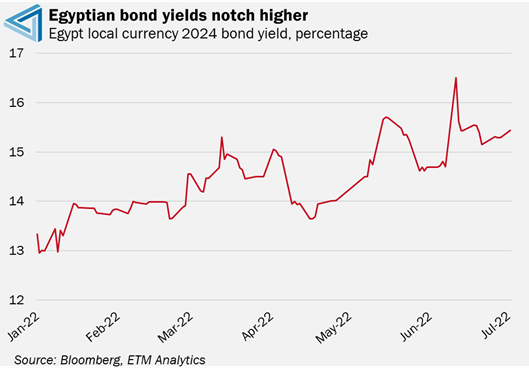 According to a statement from the Presidency’s spokesperson, President Sisi directed to target reducing the debt-to-GDP ratio over the future period from the current level, in addition to rationalizing government spending and maintaining the continuity of discipline in the performance of the state’s public finances. President Sisi also directed the government to focus during the coming period on supporting and strengthening social protection programs and continuing investments to maximize production and provide job opportunities, in addition to continuing spending on health and education programs.

The general trend across the world at the moment is that fuel prices are at record high levels. Most Sub-Saharan African countries have been exposed to these high prices. This has been illustrated through rising fuel prices in the region. For context, in Mozambique, retail gas prices have risen to 86.97 metical’s per litre, from 83.3 metical’s. Diesel prices have increased by 11% and gasoline by 4.4%. Meanwhile, in South Africa, petrol prices are set to rise by 2.37 rands for 93-octane and by 2.57 rands for 95-octane from 6 July. We have seen petrol prices rise by nearly R5.00 in the last two months. The year-on-year increase has been 53.8% since July 2021. 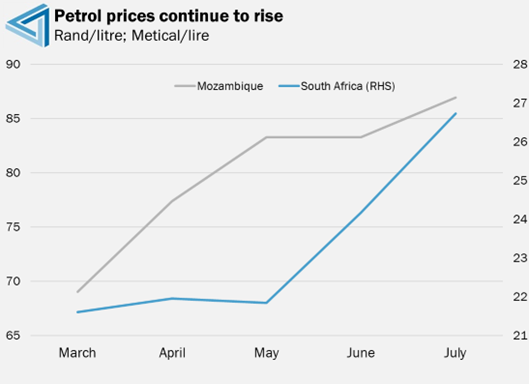 In the report on Friday, we touched on how inflation pressures in Africa have been building amid weakening currencies, elevated commodity prices, and persistent supply chain shortages. With fuel prices expected to continue to increase, we are unlikely to see inflation pressures start to ease in the coming months. Not only do high fuel prices impact travel costs but also increase food and energy prices. This increases the cost of living severely. Governments are stepping in to provide price reprieve for consumers, with Zambia and South Africa both extending their respective fuel relief measures longer than initially planned.

While the fuel reprieve measures will help reduce costs for consumers in the near term, the levies will come at a fiscal cost, leading to potential currency weakness. Should the price reprieve measures drive investors to price in increased fiscal premiums, the measures could be counter-intuitive as currency weakness would further increase import costs. For Sub-Saharan African countries, it will be important to weigh whether intervening in the high fuel prices will provide more of a benefit or cost to the country. Many of these countries don’t have the fiscal room to afford such measures; therefore, such measures will likely result in additional inflationary pressures down the road.